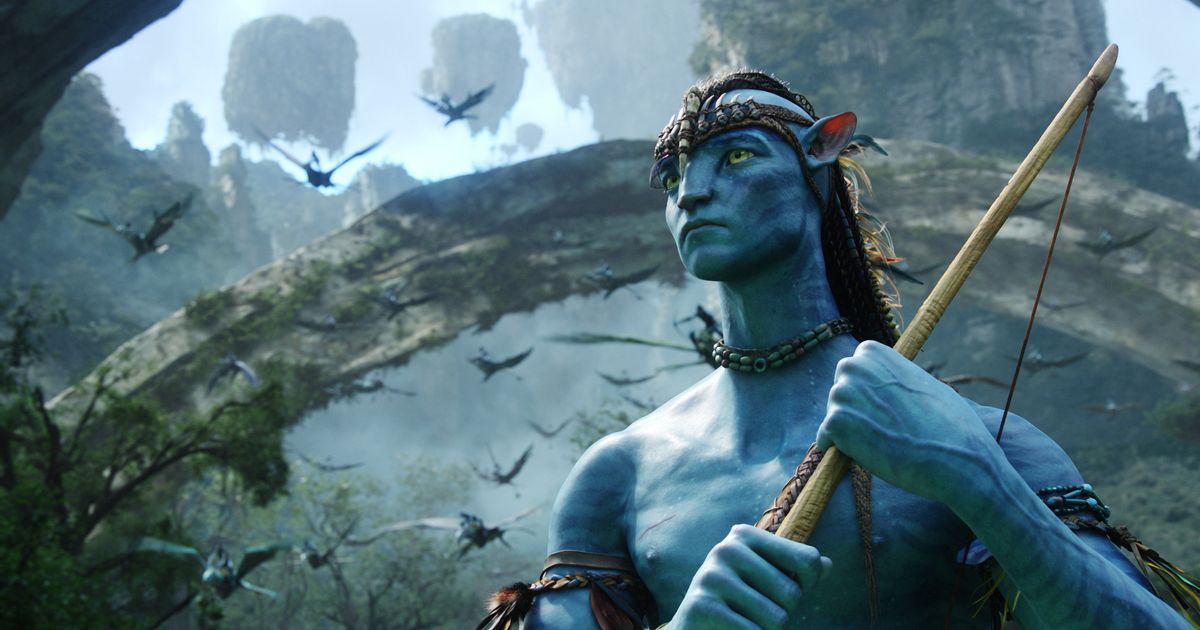 Filming has begun on the four sequels to Avatar, James Cameron’s 2009
3-D CGI adventure about a paraplegic marine who lands on the planet Pandora to mine unobtainium. This time, though, Cameron is really gonna make it happen — he’s not playing around! He’s spent much of the last decade teasing us about the upcoming installments, throwing out piecemeal updates (with occasional breaks for a Titanic rerelease or to shade Alien: Covenant). But this time, he’s serious. Avatar 2 even has a title, The Way of Water. It’s the first of the installments known as the The Avatar Sequels, which will come with a budget of $1 billion. (That’s three and a half Lord of the Rings trilogies, six Wonder Womans, 66 Hurt Lockers, and 250 Moonlights.) Here’s a timeline of all Cameron’s Avatar promises that once seemed broken, or at least teetering on the edge of breaking, but he’s definitely about to make good on them, you’ll see. You’ll all see.

January 7, 2010: Days after Avatar made $1 billion, Cameron announces that we’re getting a sequel. “Yes, there’ll be another,” he tells the crowd after a screening in Los Angeles.

January 14, 2010: Now he says there won’t just be another — there will be several more. ““I’ve had a story line in mind from the start — there are even scenes in Avatar that I kept in because they lead to the sequel,” he tells EW. “It just makes sense to think of it as a two or three film arc, in terms of the business plan.”

February 16, 2010: We’re not only getting several more trips to Pandora, but a book! “I told myself, if it made money, I’d write a book. There are things you can do in books that you can’t do with films,” Cameron says. Your middle-school librarian nods in agreement.

August 7, 2010: Now Avatar 2 and Avatar 3 will be filmed back-to-back. “We’re talking about that, that makes a lot of sense, given the nature of these productions. We can bank all the capture and then go back and do cameras,” he says. But really, he’s focused on the prequel novel: “I didn’t want to do some cheesy novelization,” he says, “where some hack comes in and makes shit up.”

March 7, 2010, an aside: Cameron loses the Oscar. (Later on, he’ll say that the Oscars don’t award his kinds of movies anymore, meaning “big, visual cinema.”)

April 21, 2010: The Avatar sequel, Cameron says, will dive deep (not into the history — that’s for the novel) into the ocean. “Part of my focus in the second film is in creating a different environment — a different setting within Pandora. And I’m going to be focusing on the ocean on Pandora, which will be equally rich and diverse and crazy and imaginative, but it just won’t be a rain forest,” he tells the Los Angeles Times.

October 27, 2010: Avatar 2 and Avatar 3 are definitely happening ASAP — he passed on Sony’s never-realized Cleopatra to work on them. Fox made a big donation to his environmental green fund to make sure the trilogy rises to the tippity top of his to-do list. Cameron is shooting for a December 2014 and December 2015 release.

May 7, 2012: Not just Avatar 2 and Avatar 3. Now James Cameron has an Avatar 4 in store, too. He says he’s Avatar only. Literally, he says this: “I’m not interested in developing anything. I’m in the Avatar business. Period. That’s it. I’m making Avatar 2, Avatar 3, maybe Avatar 4, and I’m not going to produce other people’s movies for them,” he tells the New York Times. He confirms it formally in August 2013.

December 2013: Avatar 2, Avatar 3, and Avatar 4 will shoot in New Zealand. Not sure when, but probably soon-ish? When you jot it down in your calendar, maybe use pencil or one of those fancy erasable pens they sell at Staples.

April 12, 2014: Cameron says they’re in preproduction! Go ahead and set those iCal alerts.

January 14, 2015: He says Avatar 2, Avatar 3, and Avatar 4 are delayed, but only for a couple years, ideally 2017. So it’s a little delay, not a big delay. If we’re using Google calendar by this point, adjust it accordingly.

April 28, 2015: James Cameron isn’t just giving us Avatar 2, Avatar 3, and Avatar 4. Did you think we’d get away without an Avatar 5? He and his writing team have come up with five whole freaking scripts. We’re getting Avatar 5, too.

January 1, 2016: He’s losing steam. How can he get it done? The Wrap reports that Avatar 2 has been “suspended indefinitely.”

April 14, 2016: “The next time I see you will be on Pandora,” Cameron tells a Comic Con audience. He’s back, baby! And this time, he’s promising a new Avatar nearly every other Christmas: Avatar 2 is slated for release on Christmas 2018, with Avatar 3 following on Christmas 2020, Avatar 4 on Christmas 2022, and Avatar 5 on Christmas 2023.

September 8, 2016: Sam Worthington is deep into his Christian movie stardom, Zoe Saldana is with Guardians of the Galaxy now, but Cameron is still hard at work on those Avatar movies. You’ll get them when you get them. Okay?!? “We haven’t moved that target yet, but we will if we need to,” Cameron says. “The important thing for me is not when the first one comes out but the cadence of the release pattern.”

September 25, 2017: Seven years later, Cameron has started filming! Fox says the first Avatar sequel will be released December 18, 2020. Avatar 3 comes a year later, and the last two are due December 2024 and 2025. The Avatar Sequels aren’t just about the destination (again, Pandora, in case you’ve forgotten in the interim). Avatar is about James Cameron’s journey.

May 7, 2019: It has only been 588 days since this extremely important timeline has been updated, and I have returned to offer critical news! (You think the Avatar sequels are your ally? You merely adopted the Avatar sequels. I was born into them, molded by them!)

In light of the Disney-Fox acquisition, the House of Mouse has released an updated — and exhaustive — release schedule for all of its new titles. “Four forthcoming Avatar films, expanding the vibrant world of Pandora, will release on the pre-Christmas weekend every other year beginning in 2021,” Disney says. We’re getting the sequel on December 17, 2021; Avatar 3 on December 22, 2023; Avatar 4 on December 19, 2025; and Avatar 5 on December 17, 2027. (Extremely optimistic of James Cam’ron to assume we will still be living on a habitable planet in 2027, frankly!) These movies may or may not be titled Avatar: The Way of Water, Avatar: The Seed Bearer, Avatar: The Tulkun Rider, and Avatar: The Quest for Eywa. Your move, Marvel.

March 17, 2020: Things were going so well in the near-year between spring 2019 and spring 2020! (Granted, James Cam’ron did get into a random feud with a diver, but that is actually very fun and petty drama!) Production on the Avatar sequels, however, screeched to a halt due to the coronavirus. As cities around the globe were shutting down to contain the virus, Avatar producer Jon Landau told the New Zealand Herald that production was temporarily suspended: “We’ve delayed it. We had plans to come down Friday night with a group of people and start back up and we made the decision to hold off and continue working here [Los Angeles], and come down there a little bit later than we’d planned.” Weta Digital would continue to work on the movie’s digital effects during the pause in production.

April 2, 2020: Other directors and other movies are falling victim to the global shutdown, with release plans and opening days shifting on the calendar. Disney releases an updated release calendar of its films, noting that the first Avatar sequel is still slated to emerge December 17, 2021.

May 11, 2020: Let’s be reasonable here: Production on all these Avatar sequels can only last so long. Time is ticking! James Cam’ron gave an update to Empire, detailing his frustration with the production shutdown. “It’s putting a major crimp in our stride here,” he said. “I want to get back to work on Avatar, which right now we’re not allowed to do under state emergency laws or rules. So it’s all on hold right now.” Speaking from his Malibu home, the filmmaker explained that he was about to travel halfway across the globe for a phase of the shoot before lockdown put paid to those plans. “We were about to shoot down in New Zealand, so that got pushed. We’re trying to get back to it as quick as we can.”

August 2020: Technically this is not related to an Avatar sequel announcement — it is barely related to canonical Avatar, as imagined by James Cameron — but really you must see Joe Rogan earnestly compare a real live person to Na-apostrophe-vi.

get ready to take a big puff of your stogie when you see where joe goes with this thought pic.twitter.com/4ZuvhZi81H

September 10, 2020: Sigourney Weaver gives the thumbs up while performing a mocap stunt, instilling confidence that the film is definitely, totally, unequivocally … being made.

September 27, 2020: Avatar 2 is almost done! Avatar 3 is almost-almost done! “We’re 100 percent complete on Avatar 2 and sort of 95 percent complete on Avatar 3,” James Cam’ron told Arnold Schwarzenegger during a one-on-one for the 2020 Austrian World Summit, per Deadline. “We’re able to operate. We’re able to shoot and have a more or less normal life here. We were very fortunate, so I don’t see any roadblocks to us getting the picture finished, getting both pictures finished.”

The director wouldn’t divulge any other details about the sequels. “I can’t tell you anything about the story. I believe in the mystery and the great reveal.” And I believe in Avatar!

“I was speechless…I was moved to tears.”

April 27, 2022: Praise Eywa! Fans finally get to watch the very first teaser trailer for the upcoming sequel, which now has a name. It will be called Avatar: The Way of Water. Producer Jon Landau says that the trailer will premiere in theaters on Friday, May 6, ahead of Doctor Strange and the Multiverse of Madness.

We officially have a title! Avatar: The Way of Water 🙌💙 pic.twitter.com/v5bFUIZLH0