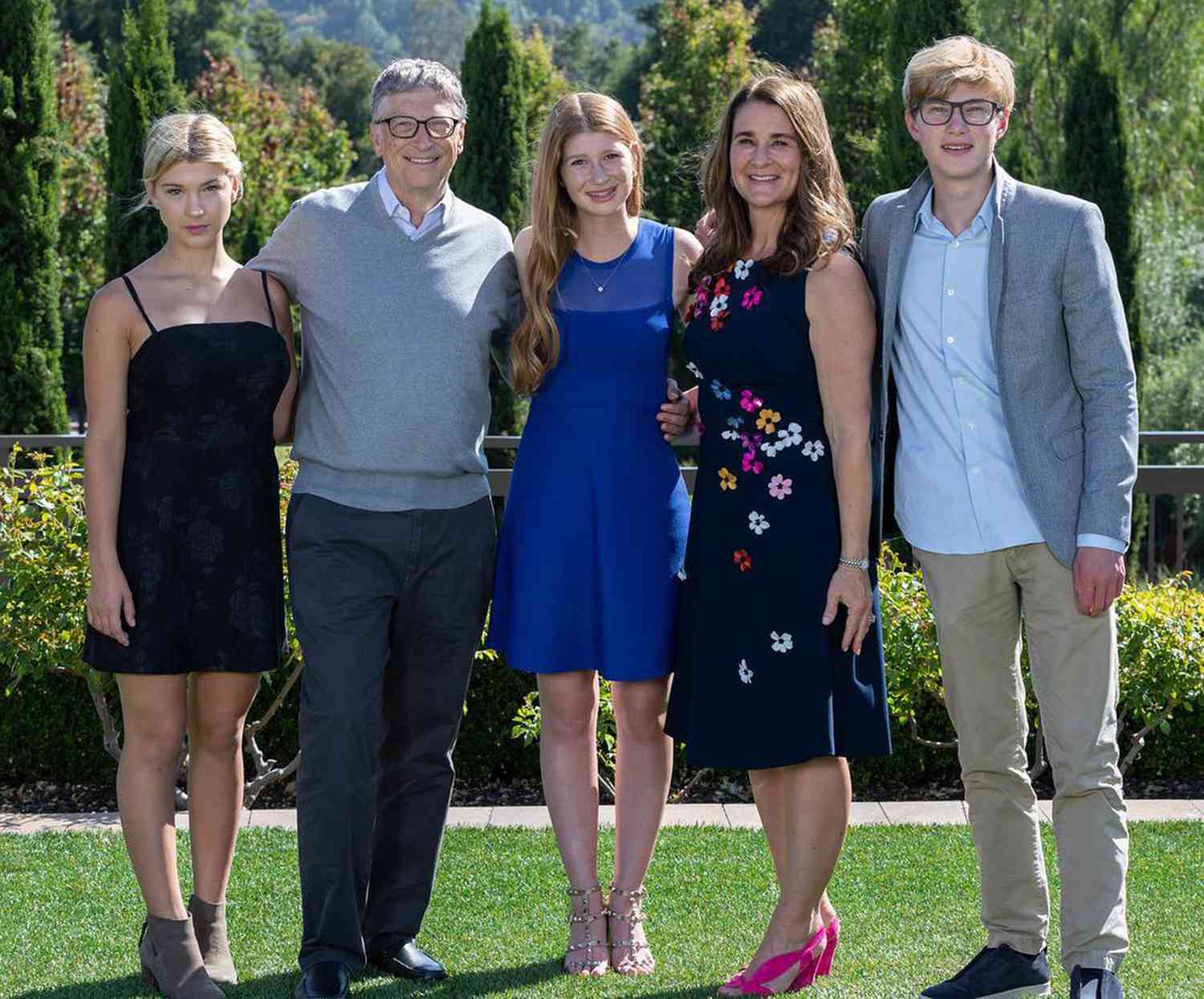 Bill Gates and Melinda French Gates are going to be grandparents!

Their eldest child, Jennifer, 26, is currently expecting her first baby with husband Nayel Nassar and announced the news on Thanksgiving in 2022.

Bill and Melinda, who divorced in 2021 after 27 years of marriage, are also parents to son Rory, 23, and daughter Phoebe, 20. All three Gates kids are now adults, and a source told PEOPLE that the former couple held off on separating until their children had all graduated high school. And though Bill and Melinda are no longer together, they have reunited at important events to support their kids, like Jennifer’s wedding in 2021.

While Bill is one of the richest people on the planet, ranked fourth in the world by Forbes in 2022, he’s spoken candidly about how he won’t be passing on all of his wealth to his children. He has said that leaving his fortune to them would be a “mistake,” and that he plans to give most of it to charity — including the Bill & Melinda Gates Foundation.

Still, neither parent shies away from posting about their children on social media, whether they’re celebrating milestones or looking back on memories. On Thanksgiving 2021, Melinda shared an old photo of herself and all three children on Instagram, writing in the caption that she was reflecting on “holidays past with these three turkeys.” In April 2022, Bill shared a photo of himself dancing with Jennifer at her wedding to mark her 26th birthday.

Keep reading for everything to know about the Gates children.

The medical student describes herself as an “equestrian, newlywed, bookworm” on Instagram, on which she has over half a million followers. She is a professional show jumper who has been competing for years.

Jennifer married fellow equestrian Nayel Nassar in a custom Vera Wang dress on Oct. 16, 2021. Nassar proposed during a ski trip in January 2020 and Jennifer shared the news on Instagram, calling her then-fiancé “one of a kind.”

Her parents reunited at the wedding, which took place only a few months after their divorce. Both were pictured walking alongside their daughter and made separate social media posts to celebrate the milestone.

Since the Gates’ divorce news was announced, Jennifer has spoken about her parent’s split, sharing a statement on her Instagram Story on May 2021. She asked for privacy during the “challenging” time for her family.

Just over a year after Jennifer and Nayel tied the knot, the couple shared exciting news: They are currently expecting a baby. Jennifer announced her pregnancy on Thanksgiving, writing, “Thankful. 💚🍼,” alongside two photos of her growing baby bump.

“I couldn’t be more excited to meet this little one and watch you two become parents,” Melinda commented on her daughter’s post. Jennifer’s baby will be Bill and Melinda’s first grandchild.

He graduated from the University of Chicago in June 2022, achieving “a double major and a master’s” in just four years. His family was there to support him on graduation day with his sister Jennifer posting a photo of the three Gates siblings on Instagram.

The month prior, Jennifer posted a photo of Rory and her dog Earl to mark both of their birthdays, calling the pair the “best pup and brother in the world.”

In honor of her son’s 18th birthday in 2017, Melinda wrote an essay for TIME in which she described Rory as “compassionate and curious,” as well as “intelligent and well-read.”

She also stated that one of the traits she is most proud of is that he is a feminist. “Across 18 years of conversations, sharp observations and everyday actions, he’s demonstrated his belief that gender equality is something worth standing up for,” she wrote. “When we talk about these issues at the dinner table, he (and his friends!) have a lot to say.”

She’s currently studying at Stanford University after graduating from high school in 2021. On Phoebe’s graduation day, Jennifer dedicated a post to her sister on Instagram, writing alongside a series of photos from over the years, “Pheebs- I can’t believe this day is here (time flies! 😅) but you are wise beyond your years, and so ready for this next incredible chapter in your journey. I love you, I am immensely proud of you and can’t wait for all that’s to come at Stanford ( !!! 🌲 🙌) and beyond.”

Since her parents announced their divorce, Phoebe has been seen out with her father, including at the TIME100 Gala, where the father-daughter duo posed for photos together on the red carpet.

The youngest Gates child has also enjoyed some mother-daughter bonding with Melinda since the split, including a date night in London in August 2022.

Phoebe is very outspoken when it comes to social and political issues. After the Supreme Court overturned Roe v. Wade in 2022, she wrote an article for Vogue about the global implications of the decision and shared information about Planned Parenthood on her Instagram.

The Stanford student is also very passionate about fashion. In September 2022, she completed an internship at British Vogue and expressed her gratitude for the experience on Instagram. “Thank you @britishvogue for giving me the internship of a lifetime. It was an honor to work with some of the best in the business and learn from you all,” she wrote alongside a series of photos from her time at the publication.

And it appears she may get some of her fashion inspiration from her mom. The following month, Phoebe channeled Melinda in a pink blazer and posted a photo of her mother wearing a very similar look. “Should I dress up as @melindafrenchgates for Halloween? y/n?” she captioned the Instagram post.

As for what she has in common with her father, Phoebe is an avid reader. In a 2018 Instagram post, Bill wrote that the two of them love “reading all kinds of books,” noting that John Green was one of their favorite authors at the time. He quoted Phoebe as saying, “For years I have been a loyal John Green fan — devouring his novels in the back of coffee shops, while traveling, and curled up on my couch. Something about the imagery of his books makes me get caught up in the fantasy of his stories, but Turtles All the Way Down hit closer to home for me than the rest.”

Exclusive: Devin Haney can be one of the best ‘in the history’ of boxing

Ruben Randall - August 3, 2022 0
Money
One of the most iconic television shows that still resonates with fans today is The Fresh Prince of Bel-Air....

The Final Season of ‘This Is Us’ Returns With New Episodes