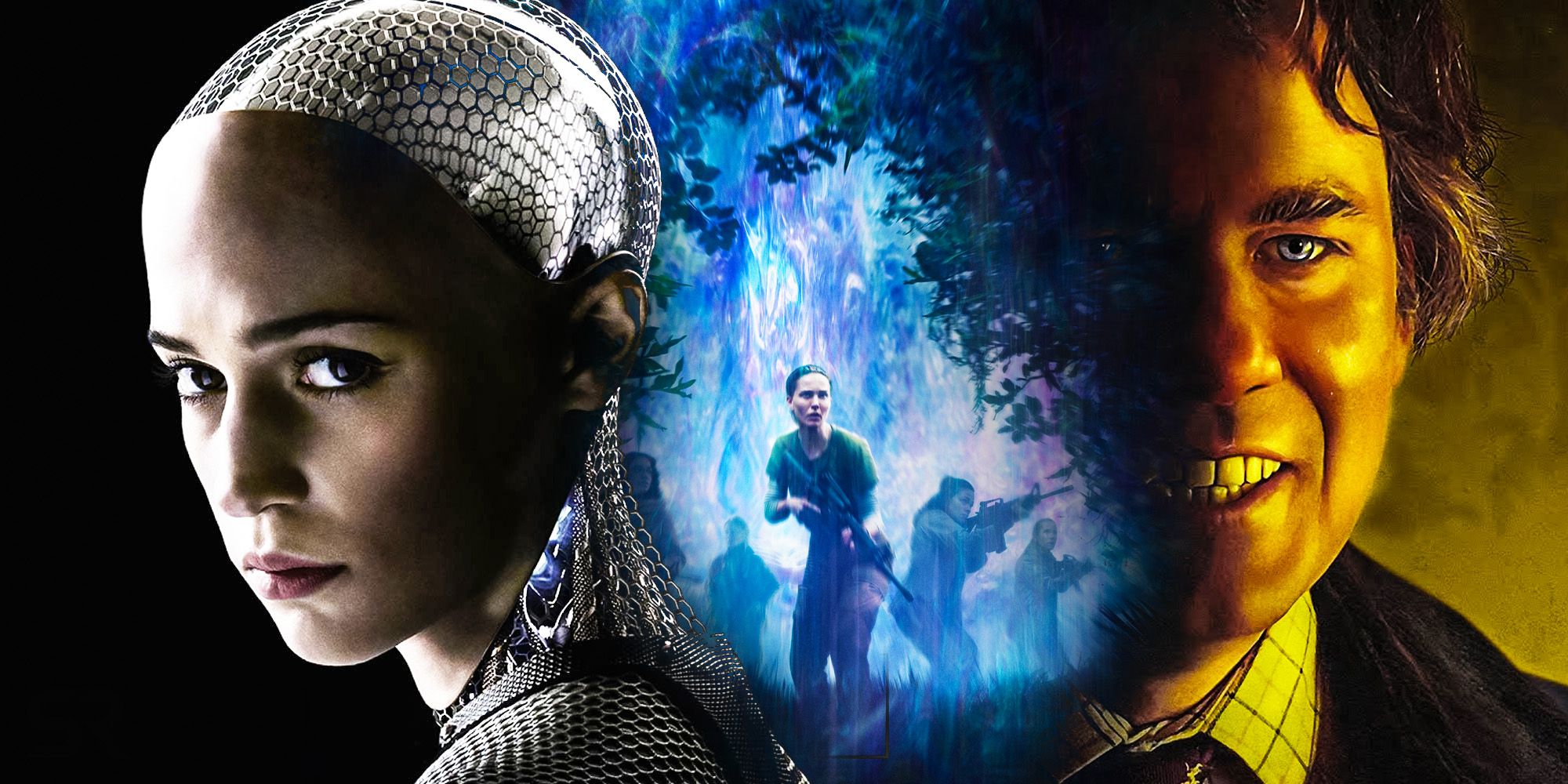 All three Alex Garland films ranked from worst to best. The filmmaker made his screenwriting debut with the Danny Boyle-directed 28 Days Later and has gone on to write a plethora of movies and TV shows, including Devs, Never Let Me Go, and Sunshine. While he largely sticks to sci-fi, Garland has done plenty of horror, among other genres.

Garland made his directorial debut in 2014 with Ex Machina and has since directed two more films, with a fourth — Civil War starring Kirsten Dunst — on the way. When it comes to Garland’s movies, they’re always layered, stylish, and filled with themes and moments that can be dissected and discussed long after the film is over. His propensity for creating such intelligent, often surreal, films is what has catapulted him into the spotlight and garnered his work much critical acclaim. Like his films or not, there’s no doubt they have made an impression.

However, not all of Garland’s movies are created equal. This piece aims to rank the filmmaker’s feature films as a director. Men, his latest, Annihilation, and Ex Machina are all very different, standing out in their own ways. Here are all three of Garland’s films, ranked from least good to his best.

Men follows Harper Marlowe (Jessie Buckley), who goes on a brief holiday to escape the trauma following her husband James’ (Paapa Essiedu) death. Renting out a country home, Harper realizes there really isn’t anywhere that is safe as a woman. Inside her home, she is stalked by a creepy naked man (Rory Kinnear); while walking in town, she is harassed by the church vicar and is on the receiving end of misogynistic and offensive language. His third feature as writer-director, Garland’s Men is perhaps the most ambiguous, harrowing, and surreal film Garland has written and directed to date. There is an underlying feeling of dread that permeates the film, bringing with it a series of unsettling events that unravel as the story draws to its end.

While the movie is a horror filled with dread and the tension is excellent as it ramps up, Men is mostly a series of traumatic events lobbied at its main character. It pulls on the strings that make up women’s experiences with misogyny, but is often too vague in bringing everything together cohesively. The film’s ambiguity is equally a strength and a weakness, leaving viewers with the distinct realization that the story isn’t as deep as it purports itself to be. Men is vague enough while being riddled with religious imagery and symbolism, but it asks its audience to be patient as it builds toward something that attempts to draw conclusions where there might not be any. Garland has tackled surreality before with success and Men is an overall interesting and well-made film that leaves one with much to think about after, but it’s also not the director’s strongest work thus far.

Based on the first novel in James VanderMeer’s trilogy, Annihilation follows a biologist, Lena (Natalie Portman) and her team — Gina Rodriguez, Tessa Thompson, Jennifer Jason Leigh, and Tuva Novotny — who enter into a mysterious area where nothing is as it seems after the disappearance of Lena’s husband Kane. Of his films, Annihilation is perhaps Garland’s most visually stunning. Like Men, Annihilation can be quite ambiguous, but it thoughtfully touches upon themes of environmental destruction, the destruction humanity can inflict, and so much more. It’s also quite a thrilling ride from start to finish. Littered with moments of unease, Annihilation doesn’t have any immediate answers, but that is a part of what makes the journey so worthwhile as the tension cuts through at every turn.

The film is shrouded in mystery, its mind-bending story twisting and turning as it treks towards its conclusion. To that end, Annihilation cannot be broken down into simple terms, which is also what makes it an endlessly exciting film. It’s visually captivating, the natural world that surrounds Lena and her team both a wonder and a threat. The scares, meanwhile, are intense and horrifying. Here, Garland shows his gifts for creating a world that is replete with dangers and beauty, meaningful and jarring in its exploration of evolution, human relationships, and the connection to nature. Garland’s second feature was ambitious and showed he wasn’t afraid to take risks, deviating from the world of Ex Machina in fresh, thrilling ways. Annihilation is the kind of film that needs rewatching, with each viewing offering something entirely new.

Garland’s directorial debut, Ex Machina has become a classic sci-fi thriller. It’s also notable for bringing the world a scene of Oscar Isaac dancing barefoot. The film follows a CEO named Nathan (Isaac), who flies in Caleb (Domhnall Gleeson), a programmer, to give the Turing test — which measures a machine’s intelligence capabilities — to the artificially intelligent being Ava (Alicia Vikander), who is but one of Nathan’s many AIs. Ex Machina engages with its audience intellectually, examining what it means for a being to be considered intelligent and conscious, with Ava outwitting the characters and viewers alike in many respects. The film has big ideas that it executes tremendously well, while also leaving a lot of room for further analysis. Crucially, Ex Machina takes on challenging material with ease, creating a world where machines and humanity are not too different.

Ex Machina is perhaps Garland’s most straight-forward movie, but one that doesn’t take a backseat to the themes it presents. The film proved not only Garland’s capability at crafting a smart, thoughtful sci-fi drama, but also showcased how themes regarding humans, machines, and the continued advancements of AI can be brought into a new light without feeling derivative. Its ending is satisfying, a result of the fantastic buildup and tension brewing throughout the film. The cast’s portrayals are layered, with Vikander especially delivering a standout performance as Ava. More so than Men and Annihilation, Garland had a firm grasp on the characters and story in Ex Machina,  giving them all room to breathe while ramping up the tension, drama, and moral ambiguity that permeated the film. It remains his best film to date and is a reminder of what the filmmaker is truly capable of.

90 Day Fiancé: Ariela’s Job Questioned After Her Savings Are Revealed


Mae Abdulbaki is a movie reviews editor with Screen Rant. She previously wrote about a variety of movies and TV shows for Inverse, CinemaBlend, Pajiba, and The Young Folks, where she wrote reviews, features, news pieces. Her other work can be found at The Mary Sue, Film School Rejects, UPROXX, Heroic Hollywood, Looper, The List, and Bam Smack Pow, among others. Mae has also appeared on television segments, podcasts, and panels to discuss all things entertainment.

Ruben Randall - June 8, 2022 0
Actor
the anthill The week has started with the presence on the set of Antenna 3 by Álvaro Morte and Rodrigo Santoro. The...