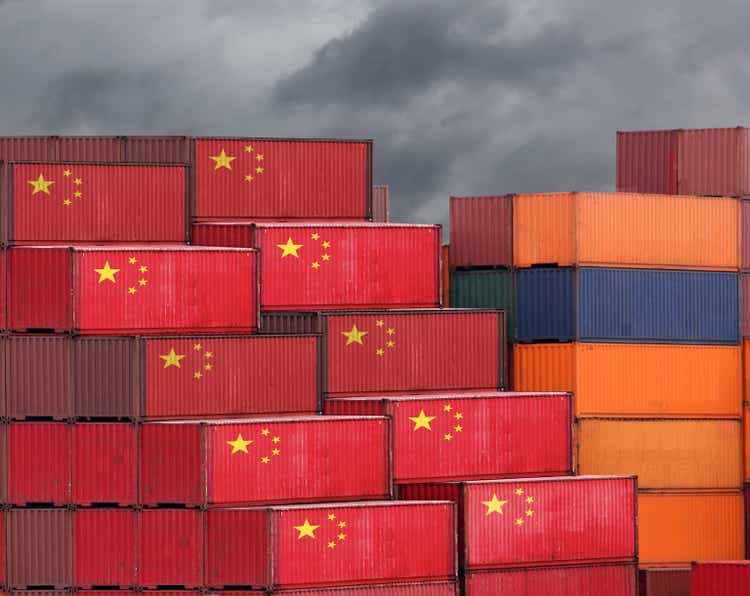 When BABA had great fundamentals, it was worth the uncertainty and risk associated with China, but I am not so sure after the latest results and projections.

With that said, after a 30% rally, the technical picture looks a little bit more encouraging.

I rate BABA a hold at this point in time.

Alibaba has rallied significantly over the last month. The stock seemed to find a temporary bottom in the $65 region, and has since rallied to over $90. Other Chinese stocks have also rallied with it, but it is not quite clear why.

There is definitely some optimism that China will be easing on its Covid zero policy. However, and though BABA’s valuation is still cheap, the company has seen worsening fundamentals.

Above, we can see a slide of the latest Q2 presentation. What we have is a breakdown of revenues and EBITDA for each segment. The first table is for the latest quarter and the one above looks at the same quarter in 2021.

Overall, BABA achieved very modest growth in RMB terms. But the company has actually made less money in absolute dollar terms. Local commerce has barely increased and what’s more worrisome, in my opinion, is the fact that the cloud segment only increased 4% YoY.

One silver lining can be found in the slight improvement in margins across the board. Local consumer services seem to be heading in a good direction, growing fast and gaining profitability.

BABA is a great company, but it faces challenges that are out of its control.

Alibaba is not like any other company and that is clear in the way investors have been treating it. For better and for worse, BABA operates mostly in China and under the supervision of the CCP, which in recent years has been known to through the company regulatory curveballs.

The latest of this comes in the form of a potential $1 billion fine for Ant Group, the financial arm of Alibaba. Ant Group has been dealing with regulatory oversight for the better part of the last 2 years as China has cracked down on “unregulated” financial technologies. At one point, Alibaba was even trying to spin off Ant Group.

With that said, this $1 billion fine could finally allow Ant Group to apply for a financial holdings license and spin off definitively from Alibaba, which I would view as bullish for BABA.

The threat of CCP regulation is ever-present in investor’s minds, but some financial commentators are calling for “peak regulation”. This view was exposed by Jonathan Krane of KraneShares. Krane believes that now that the foundations have been set, Chinese tech companies will be able to operate more freely in the future.

The other main problem BABA faces is the slowing Chinese economy. Alibaba is a consumer facing company, and it relies on the purchasing power of Chinese households. For years, the Chinese economy boomed as it played catch-up with the West, but it may have finally reached a saturation point.

For starters, China is still dealing with the aftermath of a huge property bubble.

This, together with the slowed down output resulting from harsh covid lockdowns is really putting a strain on the Chinese economy.

Having said this, China is now at a crossroads in terms of monetary policy. The PBOC would like to support the economy at this juncture, and though it did lower rates a few months ago, the Central Bank decided to leave rates unchanged in their last meeting. The problem China faces is the weakening Yuan, which threatens to increase capital outflows out of the country.

All in all, the world is in a delicate macroeconomic situation, with a lot of economies threatening to enter into recession in 2023 and China seems like it could be one of the most affected.

The higher they rise, the harder they fall.

While fundamentals are shaky, we are getting some encouraging stock price moves.

BABA is up roughly 30% in the last month. We have broken through the 50-day MA and are now challenging the 200-day MA on the daily chart. While it is still early to tell, this does look like an impulsive move off the recent low.

My expectation is that we will find resistance at the 200-day MA, which will lead us to retrace into the $70 region. This is the 61.8% retracement of this move so far (though we could still rally a bit more from here).

In any case, if we can hold a retrace and then rally above the black line, which is the trendline from the all-time high, then I might go as far as saying that BABA has found a bottom.

I have always liked BABA’s fundamentals, but I am less bullish on these now. However, the recent price action has me thinking that a bottom could be in place. With the right help from the CCP and the PBOC, BABA could reach new all-time highs sooner than many people think. For now, though, we must remain cautious, so I am giving BABA a rating of “Hold”.

Why Gene Goes Back To Being Full Saul Goodman Again