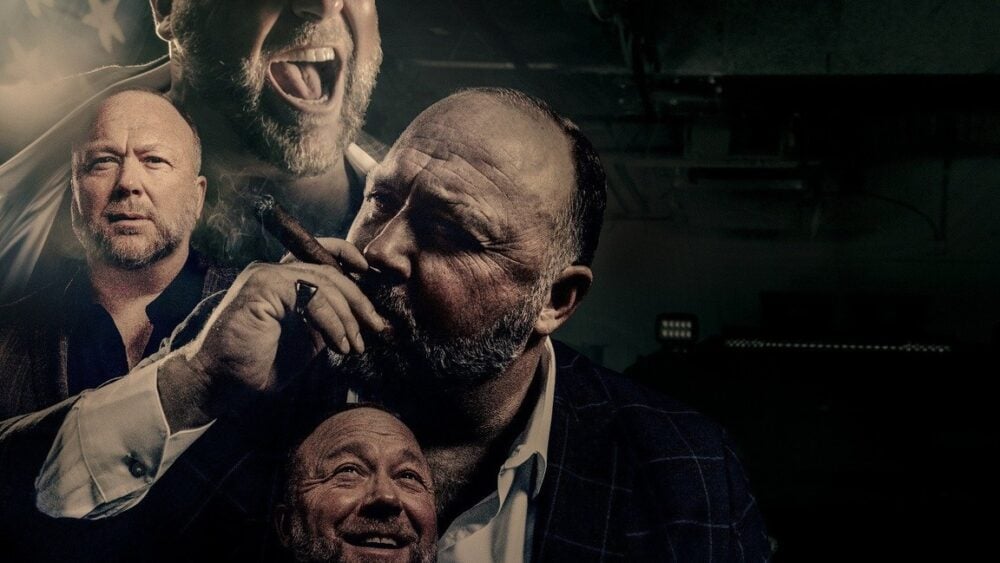 Alex’s War, a new documentary directed by Alex Lee Moyer, is an expansive documentary feature of America’s most famous conspiracy theorist, Alex Jones. The film is valuable in quite a few ways: It does a fine job assembling footage from throughout Jones’ life and career while demonstrating the dramatic changes in the American political and media landscapes over the course of the last 25 or so years.

Moyer had Jones’ full cooperation, and he sat for what appeared to be hours of interviews, even “breaking character,” so to speak, at various times. The film, now out in some theaters and most major VOD platforms, cuts back and forth between a chronological look at Jones’ life, and the lead-up to January 6 Capitol riot, and the InfoWars host’s participation in it.

That said, this is a film that very much misses the forest for the trees, and leaves the important part of the story unstated.

And that is this: The central fact about Alex Jones is that most of the major things he’s said throughout his career haven’t been true.

The 9/11 attacks were not a hoax, nor were any of the major school shootings. Barack Obama wasn’t born in Kenya, and Michelle Obama is not transgender. COVID-19 is neither fake nor a globalist plot to kill millions, and the 2020 election was not stolen from Donald Trump. There is not now, nor has there ever been, a secret plot to take away the guns of all Americans. And perhaps most importantly, global elites, rather than skillful evil conspirators who successfully rule behind the scenes, are actually bumbling incompetents more often than not.

That is, if you ask me, the only fact about Alex Jones that matters. Everything Jones has suffered, from social ostracizing to the numerous lawsuits to the social media banishments to whatever degree of punishment he faces for January 6, is entirely of his own making.

How could Moyer have dealt with this? There’s not really an easy way; she’s a documentarian and not a fact-checker, and this isn’t an Errol Morris-style nonfiction film in which a controversial character is confronted by an interviewer (I would love to see that sort of film about Jones, though he’d almost certainly never agree to it.) The director, per a lengthy disclaimer at the beginning of the film, states that “this film will contain coverage of real events, as well as ideas and perspectives held by the film’s participants which some viewers may feel upset by or disagree with.”

Moyer’s director’s statement describes the film as “in the spirit of Errol Morris or Werner Herzog,” although she leaves out the part about the director directly challenging the subject on camera.

Alex’s War isn’t exactly a full hagiography of Jones, nor an indictment of him. It mostly just assembles all of the footage, with no narration or really any point of view at all. But Jones is clearly happy with the product, having appeared at the movie’s premiere.

Speaking of which: The film arrives the same week that a lawsuit against Jones by some of the families of those killed in the 2012 Sandy Hook school shooting went to trial. No one else that I’ve ever heard of has ever gone on trial for encouraging the harassment of the families of children killed in a school shooting, including by implying that their kids never actually existed. Doing so was one of the more vile acts by a public figure in the last 25 years, and whenever Jones dies that will likely, deservedly, land in the first paragraph of his obituary. 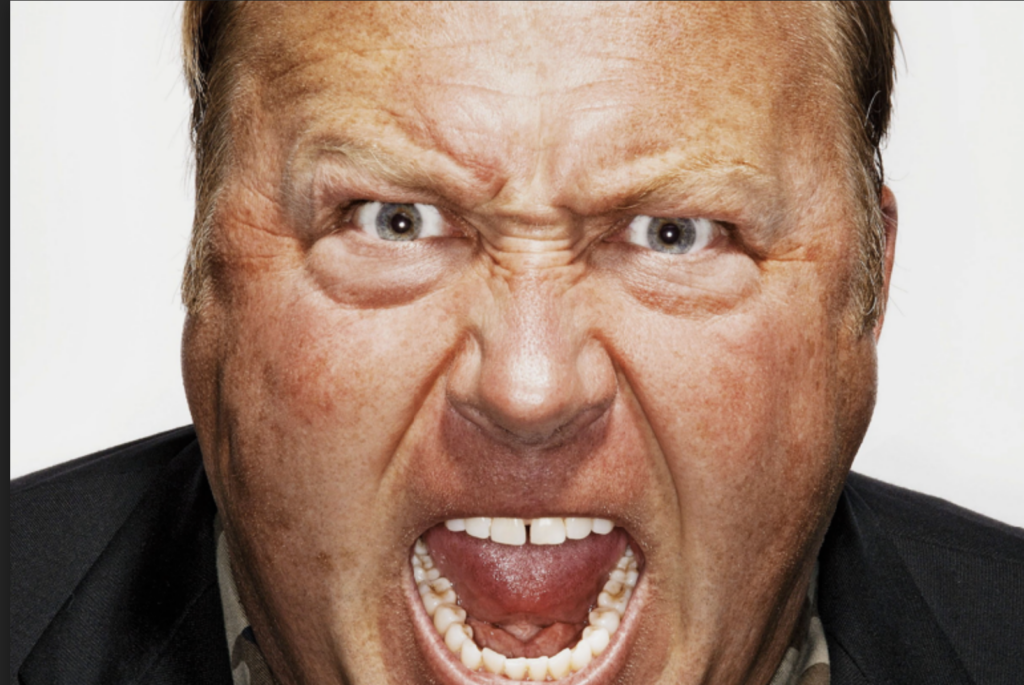 took a break from shilling for Vladimir Putin and January 6 insurrectionists to shill for Jones instead, during which he ludicrously referred to Jones’ spreading of Sandy Hook conspiracies as a mistake.

In another part of the documentary, we see more than five minutes of Jones ranting in front of an obscure, Stonehenge-like monument called the Georgia Guidestones, arguing for some nonsensical conspiracy theory about Satanists and Ted Turner. The Guidestones, long a hobbyhorse of conspiracy types, were destroyed in a bombing earlier this month.

The film, once again, is much more interesting for showing the historical evolution of Jones, as well as of the wider conspiracy subculture. Jones at one point was considered something of a harmless gadfly, the sort of Austin-dwelling oddball who might show up in one of Richard Linklater’s movies (as Jones did, in both Waking Life and A Scanner Darkly.)

Jones, as recently as 2004, was a guy who ripped both parties as equal servants of the globalist elite. His more direct alignment with conservatism, to the point where he participated in an effort to keep a Republican incumbent president in office, likely had a lot more to do with the party moving towards his worldview than any change on Jones’ part.

Like a lot of people on the right, Jones was something of a libertarian in the Obama years, while never batting much of an eye at the more activist, authoritarian right-wing government of the Trump years.

There are also some surprises in the old footage- especially a Hollywood-era Joe Rogan, on the morning of 9/11, calling into Jones’ show and disagreeing with his conspiracy theories. We also see Jones’ brief public friendship with Charlie Sheen. There’s the footage of his argument over guns with Piers Morgan, showing that Morgan’s main function in media is to go on TV and lose arguments with terrible people.

Moyer, the director, previously made 2020’s TFW NO GF,  an exploration of 4Chan and incel subcultures. It might have been a fascinating film if it had gotten beyond the stereotypes, but the film ultimately concluded that these guys are exactly who you thought they were. 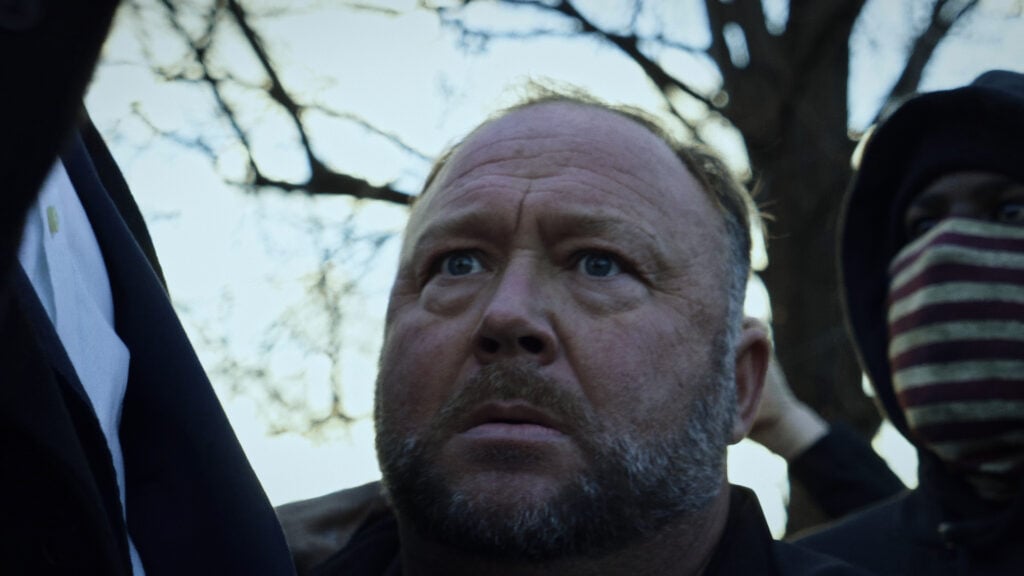 The film also uses interesting music, I’ll give it that. Jones is seen marching in a pre-January 6 rally to a knockoff of the Top Gun theme song, while also using a hilarious Bon Iver-style parody, by Nick Lutsko, called “Alex Jones As An indie Folk Song.” And if you thought Jones’ style was reminiscent of pro wrestling, as many have over the years, the movie also sprinkles the late-’90s version of the Monday Night RAW theme song.

Two postscripts: There are some who believe that it’s wrong to “platform” or “give attention” to Jones even by reviewing this documentary. I don’t subscribe to that reasoning; this is a project that is worth engaging with, and doing so does not mean endorsing or condoning Jones’ worldview, or anything close to it.

At the same time, I’ve developed a considerable distaste for movies about right-of-center subjects claiming persecution or censorship, especially if critics won’t review them. No, critics choosing not to review a film is not, in any way whatsoever, a form of censorship, nor is there any sort of critical conspiracy to suppress this movie.

“They Just Like to Lie There”: 8-Year-Old Arnold Schwarzenegger Executed a...

Ruben Randall - October 17, 2022 0
Money
Arnold Schwarzenegger has proved his versatility in various fields. Moreover, he hasn’t just tried but excelled in everything he did. In an interview in...

The 1990s Disney comedy that changed its name in one American...