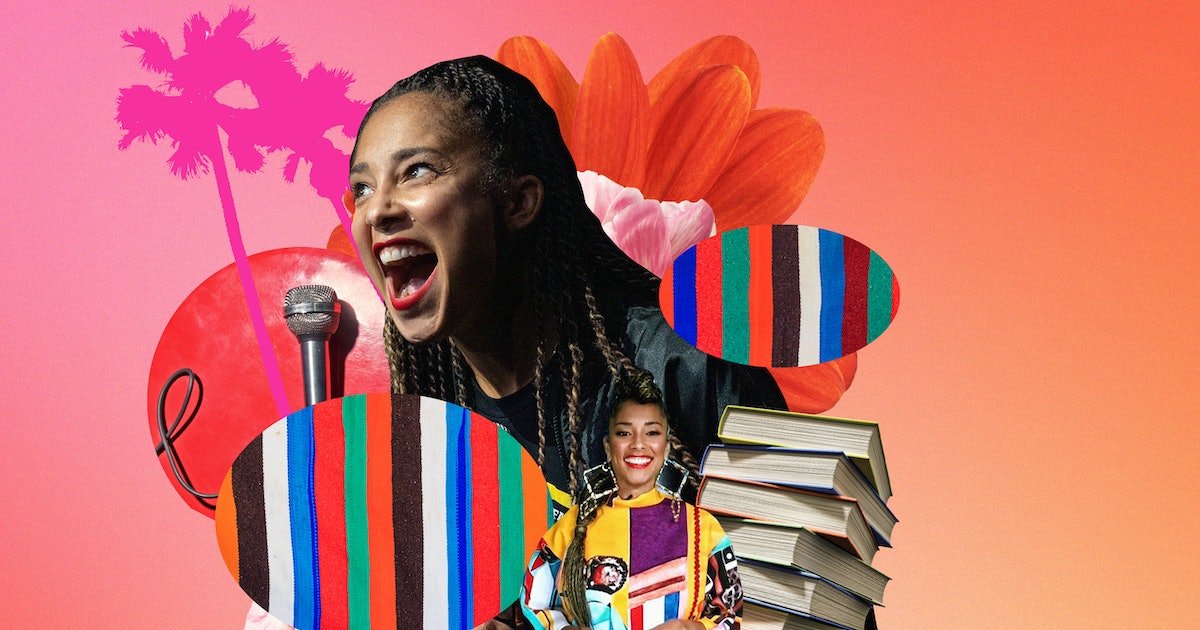 Amanda Seales tells me she knows there’s a large group of people who only hear from her when she’s saying something controversial, and based on my unscientific poll of my closest friends ahead of our virtual chat, she’s right. If you ask her why this is, she’ll blame social media algorithms. She’s less likely to trend or show up on aggregate pages such as The Shade Room when she’s saying something innocuous, she says. Instead, she’s more likely to become a headline when she’s sharing a controversial opinion or being brazen about the state of America.

When I tell my friends I’m prepping to profile the comedian and actress, they share their views of her as someone who is outspoken about important topics but also, maybe, a bit brash. Admittedly, I’ve thought this before, too. I’ve appreciated her frankness when she delivers soundbites such as “I think what annoys me most about white people is when they pretend that they’re the victim. What’s also annoying is when they, you know, when they kill us,” on Showtime’s series Everything’s Gonna Be All White. But I’ve also rolled my eyes when she tweets things like “If you’re buying Jordans and Nike Suits but you don’t have a PASSPORT, YOU’RE LOSING.”

“Brash” is, of course, a dangerous (and, often unfairly used) descriptor for a Black woman in any industry, but especially in entertainment where one’s public image can either help or hinder a person from securing work. Seales, who has been acting since she was a young child, knows this. She could decide to add a little more sugar to her words so that the next time she lands on a stranger’s explore page, she comes across a bit more inviting. But, she’s not interested in that type of attention, frankly. You can take her in totality or not at all.

When I speak with Seales over Zoom in February from a blush pink room in her home in Los Angeles, I’m able to get a glimpse of her beyond the social media snippets. She’s wearing a royal blue turtleneck cropped pullover that opens in the front to reveal a white tank top and stacked gold necklaces. Her minimum makeup reveals her freckles and warm smile. Seales, 40, wasn’t expecting to be on camera for our chat, but she graciously agrees to turn on her camera. She looks radiant and relaxed, occasionally running her hands through her brown curls as she searches for the answers to my questions. Less than two months since the end of HBO’s Insecure, on which she starred, Seales is intent on forging her own path in an unequal and unforgiving industry with the help of a Patreon-supported podcast, a virtual game show, and other projects. And, indicative of the masters she received in African-American studies from Columbia University, she’s adamant that discussions about race and Black history remain at the center of her work.

Although she was born in Inglewood, California, Seales’ family moved to Orlando, Florida when she was a young girl. By the time she was 8 years old, she was already immersed in the film and TV industry, inspired to give acting a try by the kids in her dance classes. “It was a time when Orlando was becoming a real entertainment town,” she recalls. “Nickelodeon had built a whole studio [there]…” By 1994, a teenage Seales had taken advantage of the TV channel’s local presence, appearing as a recurring cast member on Nickelodeon’s My Brother & Me series.

After high school, she enrolled at SUNY Purchase College Conservatory of Theatre Art but later left the conservatory to pursue another major. “They didn’t have a Black studies major at the time, so I made one up,” she says. “I was already just focused on [the idea that] if I’m going to be in school, this is what I want to learn about. All I care about is Black folk.” It wasn’t until she ran into a professor, Rich Bova, who was known on campus for his psychic abilities that she ever considered going to graduate school.

“As he always did, he would hold your hand and then give you a quick reading. And, he was like, ‘You need to get your masters. You’re going to change the world and you’re going to need your masters to do it,” she remembers. “When someone tells someone like me that they’re going to change the world, it’s not an ego thing. It’s more like, we’ve already established that this world is shit so if you have an opportunity to be a part of changing it, you have to take [that].” Seales eventually obtained her masters in African-American studies, with a concentration in hip-hop, from Columbia University, but she credits another professor of hers, from SUNY Purchase, with helping her to see the ways her loves of entertainment, popular culture, and Black history could intersect. “I use [my degree] every day. But, I also set up my life that way. I set a course that said I’m going to do me and that means being as Black as I want to be in all of the spaces I inhabit,” she says.

“All I care about is Black folk.”

While in college, Seales didn’t leave the entertainment industry behind, interviewing hip-hop legends such as MC Lyte and Grandmaster Flash for her papers, writing for publications such as The Source and XXL, and working as a “VJ” for MTV. During the early 2000s, Seales, who is also a singer, temporarily worked with the British R&B group Floetry, replacing founding member Natalie Stewart. Although she also appeared on Def Poetry Jam during this time, Seales said she didn’t fully return to Hollywood until 2015, one year before she first appeared on TV as Tiffany DuBois on the Issa Rae-created HBO show Insecure.

Over five seasons, fans watched as Tiffany adjusted to marriage and worked to keep her single friends incorporated in her new life, while also struggling with becoming a first-time mother and suffering from postpartum depression. The show’s audience might have been sad to see it end last year, but Seales says she woke up the morning after the finale feeling great. “We really were involved in that for such a long time and I feel like we didn’t leave nothing on the table,” she said. “We got to see Tiffany live a whole life. So, no, I wasn’t sad at all. When you’re in those shows, you’re contractually bound from doing a lot of other things, too. There’s a certain freedom I also get just in terms of my ability to create now.”

“When it’s time for my next role, it’ll be the right role and it’ll land exactly when it’s supposed to,” she continues. “That’s how I have to think about it.”

During her time on Insecure, Seales used the increased attention and success of the show to try out myriad new mediums. She appeared briefly as a co-host of the daytime talk show The Real, had her own TV comedy special on HBO titled Amanda Seales: I Be Knowin, and released a book of essays titled Small Doses before launching an interview-style podcast of the same name. She’s also launched the live interactive game show Smart Funny and Black. Some of these formats worked and others didn’t. Seales has remained unafraid to be outspoken about both. She’s not sure the panel-style format of The Real was for her, hence why she left in six months, but she’s not opposed to doing another comedy special. “I have some other stuff that I’d like to do in the stage space before I do another traditional standup special, but I definitely have some one-woman type formats that I am currently developing,” she says. “I’m very happy to be getting the support of folks like Kevin Hart, Jesse Collins and his partner Dionne Harmon. It affirms these things that have been living in my head.”

Seales has been outspoken about the lack of support she’s had in the industry, too. Notably, in 2019, the actress posted on social media that she was “being denied entrance to the Black people’s Emmy party” by Issa Rae’s publicist. Seales previously said the moment led to criticism from unexpected places. “It didn’t just come from Internet people. [It came from] peers and people I was close to,” she told E!. “That was kind of jarring for me and I had just underestimated the fact that I’m not just in LA anymore. I’m in Hollywood.”

Her disdain for the political nature of Hollywood isn’t exactly surprising. Looking back on her childhood, Seales says she’s always had an issue with following rules if she sensed they were about upholding unfair power structures. It’s a trait she believes she inherited from her Grenadian mother. “I’ve never been good with rules that don’t make sense,” Seales says. “Adults used to hate me.”

She’s admittedly not down to debate with random strangers on certain topics on social media, either. “I said on my Instagram that If y’all don’t agree with me, don’t comment,” she says, with a shrug. “I’m not interested in why you disagree. I’m not interested in your contrarianism and people were like ‘So, you just want people who agree with you on your Instagram?’ Correct. Yes.”

Based on her desire to circumvent the trolls that find her as a result of social media algorithms and her refusal to dilute her messaging to please white traditional white gatekeepers, it’s no surprise Seales has chosen a route of content creation that allows her to remain completely in control of her work and audience. In October, she launched a Patreon account for her brand Smart Funny & Black. Fans who are paying between $5 and $30 per month to engage with her content aren’t likely to be trolls or people looking to turn her worst moments into a trending topic.

But, Seales says the Patreon launch represents something more significant than that, too. For her, it’s symbolic of the fact that for the first time in her career, she finally has the courage to invest in producing her own Black ass ideas. The Smart, Funny and Black game show, for instance, has allowed her to pay homage to guests such as actors Kyla Pratt and Flex Alexander, and singer Durand Bernarr.

“My focus right now is getting my own productions off the ground and getting my own ideas moving … getting momentum behind them,” she tells me. “That’s something I just never really felt brave enough to truly do.”

Michael Jordan’s Teammate Once Got Punched for Picking Kobe Bryant, Set Up by Hollywood’s...