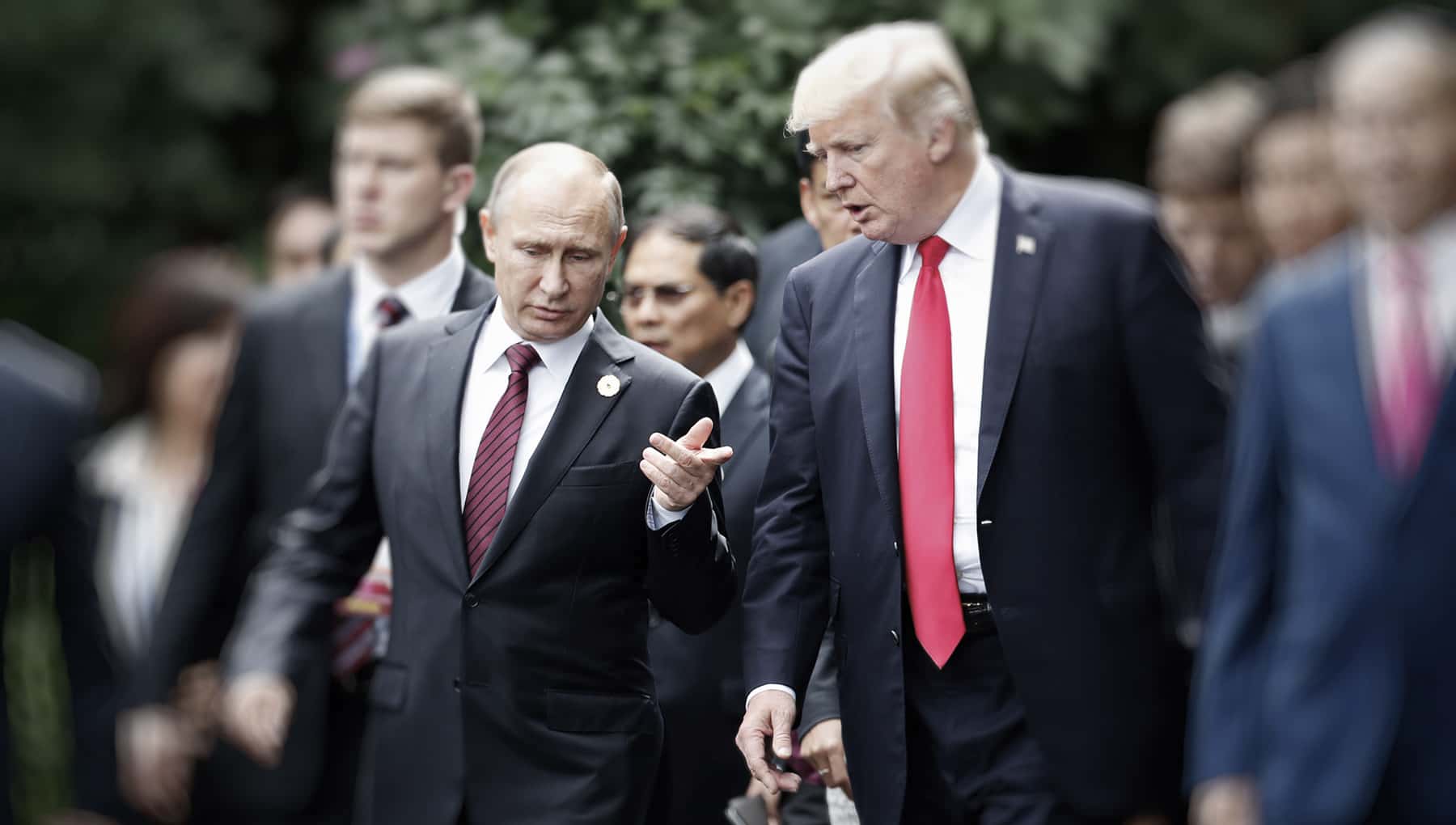 It was a vast social-media influencing project that took many forms as it sought to sow discord and confusion, even attempting to dissuade Black voters from voting. Additionally, Russian intelligence targeted voter rolls in all 50 states, which is not thought to have had consequences, but demonstrated the reach and ambition of online interference.

British investigative journalist Carole Cadwalladr said on Twitter, “We failed to acknowledge Russia had staged a military attack on the West. We called it ’meddling.’ We used words like ‘interference.’ It wasn’t. It was warfare. We’ve been under military attack for eight years now.”

As she noted, Putin’s minions were not only directing their attention to the United States, and included pro-Brexit efforts and support for France’s far-right racist National Front party. The U.S. interference – you could call it cyberwarfare, or informational invasion – took many forms.

Stunningly, a number of left-wing news sources and pundits devoted themselves to denying the reality of the intervention and calling those who were hostile to the Putin regime cold-war red-scare right-wingers, as if contemporary Russia was a glorious socialist republic rather than a country ruled by a dictatorial ex-KGB agent with a record of murdering journalists, imprisoning dissenters, embezzling tens of billions and leading a global neofascist white supremacist revival.

In discrediting the news stories and attacking critics of the Russian government, they provided crucial cover for Trump.

In her 2019 testimony to House of Representatives Permanent Select Committee on Intelligence, former National Security Agency staffer Fiona Hill declared, “Russia was the foreign power that systematically attacked our democratic institutions in 2016. This is the public conclusion of our intelligence agencies, confirmed in bipartisan congressional reports. It is beyond dispute, even if some of the underlying details must remain classified.

The impact of the successful 2016 Russian campaign remains evident today. Our nation is being torn apart; truth is questioned; our highly professional expert career Foreign Service is being undermined. US support for Ukraine, which continues to face armed aggression, is being politicized. President Putin and the Russian security services aim to counter US foreign policy objectives in Europe, including in Ukraine, where Moscow wishes to reassert political and economic dominance.”

The assertions of interference were compelling all along. On October 7, 2016, US intelligence agencies released a bombshell press release declaring “The U.S. Intelligence Community (USIC) is confident that the Russian Government directed the recent compromises of e-mails from US persons and institutions, including from US political organizations.”

In one of the weirdest days in US political history, the Access Hollywood tape of Trump boasting about sexually assaulting women was released half an hour later, and half an hour after that, “WikiLeaks began tweeting links to emails hacked from the personal account of Clinton campaign chairman John Podesta.”

Wikileaks is thought to have gotten its material from the Russian intelligence agency GRU; longtime Republican operative and Trump ally Roger Stone appears to have been a liaison between Wikileaks and the Trump team.

On October 30, 2016, then-Senate Majority Leader Harry Reidput out a furious letter to then-FBI director James Comey, charging “it has become clear that you possess explosive information about close ties and coordination between Donald Trump, his top advisors, and the Russian government – a foreign interest hostile to the United States, which Trump praises at every opportunity.”

He demanded, unsuccessfully, that Comey publicize this information. On October 31, Obama contacted called Putin on the nuclear risk reductions hotline to demand he stop this interference, but the public didn’t know about this until after Trump had lost the popular vote but won the electoral college.

Of course the most striking role of the Russian government in the 2016 US election was its many, many ties with the Trump campaign, including with Trump himself, who spent the campaign and the four years of his presidency groveling before Putin, denying the reality of Russian interference, and changing first the Republican platform and then U.S. policy to serve Putin’s agendas.

This included cutting support for Ukraine against Russia out of the Republican platform when he won the primary, considerable animosity toward Nato, and ultimately trying to blackmail Ukrainian President Volodymyr Zelensky in 2019 by withholding military aid while demanding he offer confirmation of a Russian conspiracy theory blaming Ukraine rather than Russia for 2016 election interference.

A stunning number of Trump’s closest associates had deep ties to the Russian government. They included Paul Manafort, who during his years in Ukraine worked to build Russian influence there and served as a consultant to the Kremlin-backed Ukrainian president who was driven out of the country – and into Russia by popular protest in 2014 – the Russian line is that this was an illegitimate coup and thus a justification for invasion is still widely repeated.

Manafort was, during his time in the campaign, sharing data with Russian intelligence agent Konstantin V Kilimnik, while campaign advisor Jeff Sessions was sharing information with the Russian ambassador Sergey Kislyak. Manafort, Donald Trump Jr and Trump son-in-law Jared Kushner held an illegal meeting in Trump Tower with a Kremlin-linked lawyer on June 9, 2016, where they were promised damaging material on the Clinton campaign.

After being seated next to Putin while being paid to speak at a dinner celebrating RT, Russia’s news propaganda outlet, Michael Flynn briefly became Trump’s national security advisor. He was soon was fired for lying to White House officials and later pled guilty to lying to the FBI about his contacts with the Russian ambassador.

Jared Kushner allegedly directed him to make those contacts and as the Washington Post reported in May 2017, “Jared Kushner and Russia’s ambassador to Washington discussed the possibility of setting up a secret and secure communications channel between Trump’s transition team and the Kremlin, using Russian diplomatic facilities in an apparent move to shield their pre-inauguration discussions from monitoring.”

It was reported the same year that “Donald Trump Jr has been forced to release damning emails that reveal he eagerly embraced what he was told was a Russian government attempt to damage Hillary Clinton’s election campaign.”

What is striking in retrospect is that all of this was made possible by corruption and amorality inside the United States. It was Silicon Valley’s mercenary amorality that created weapons and vulnerabilities and sat by pocketing the profit as they were exploited to destructive ends. It was corrupt Americans – from Manafort to Trump himself – that gave Putin his influence.

It was international players such as Wikileaks and Cambridge Analytica that helped. It was corruption of media outlets such as Fox News that continued – in Tucker Carlson’s case until last week’s invasion of Ukraine caught up with him – to defend Putin and spread disinformation.

The Republican party met its new leader by matching his corruption, and by covering up his crimes and protecting him from consequences, including two impeachments. The second impeachment was for a violent invasion of Congress, not by a foreign power, but by right-wingers inflamed by lies instigated by Trump and amplified by many in the party. They have become willing collaborators in an attempt to sabotage free and fair elections, the rule of law, and truth itself.

Seo In Guk Proves He Is Indeed A Multi-talented King, Find Out How :...

Ruben Randall - March 16, 2022 0
TV/Movies
Spring in Wisconsin is an interesting time. There are absolutely beautiful days when all you want to do is get outside. And there are...