Flicking through a magazine one day in 1983, Jerry Bruckheimer found himself transfixed by a photo. “It was a picture of this helmet with a visor down and a plane reflected in the visor, and then two airplanes beside the helmet, and the guy’s in a cockpit,” the Hollywood producer later recalled.

Three years later, the movie pitch that Bruckheimer dreamed up in that moment – “Star Wars on Earth” – became Top Gun, a blockbuster that grossed $350m from a $15m budget, sent Berlin’s Take My Breath Away to No 1 in six countries, turned a young Tom Cruise into the biggest movie star in the world, and made Ray-Ban’s Aviator sunglasses into a bulletproof summer style icon.

But, while the Star Wars franchise has racked up 12 films, it has taken 36 years for Top Gun: Maverick to bring back the cocksure grin and leather flying jacket of Pete “Maverick” Mitchell. Can Top Gun – an American high-school movie in military uniform, a western with fighter jets instead of horses, a film that has been dubbed “an infomercial for America” – charm the world in 2022?

A turn for the sweater … Cruise and McGillis. Photograph: Paramount/Allstar

With its high-fives and Budweisers, motorbikes and power ballads, Top Gun offers a nostalgic vision of the 1980s at a time of deep anxiety. Indeed, an appeal to a simpler, more wholesome past played a part in the popularity of the original film. Cruise in his James Dean-esque white T-shirt, McGillis with a baby pink sweater tied around her shoulders, the starchy whites of the military uniforms – these were all riffs on 50s iconography designed to beguile an 80s audience with their apple-pie wholesomeness.

Top Gun never positioned itself as a fashion film – unlike on the set of 1980s American Gigolo, Giorgio Armani was not on speed dial – but its jumpsuits, leather jackets and mirrored shades are indelibly inked into our pop-cultural memory. Costume supervisors Bobbie Read and James W Tyson chose Aviator shades for factual accuracy, the style having been commissioned by the US military as eye protection for pilots since the 1930s. A consistent bestseller since 1986, the style currently enjoys White House patronage as Joe Biden’s signature look. The backers of Top Gun: Maverick will be hoping such longevity is a good omen.

The leather flying jacket worn by Tom Cruise in the original was a centrepiece in a 2020 auction of film memorabilia that also included the thigh-high boots worn by Julia Roberts in Pretty Woman and the lightsaber used by Ewan MacGregor in Star Wars: Revenge of the Sith.

A replica appears to have been made for the sequel, with an early trailer for the new film lingering on a close up of Cruise shrugging on the iconic Navy G1 bomber, in tanned goatskin with a sheep wool collar and stars-and-stripes embroidery. The olive-green boilersuits worn for flying, and the tobacco camp-collar shirts for downtime, are reprised.

As Charlie Blackmore, Kelly McGillis’s wardrobe may not have had the knockout punch of Cruise’s but it offered an understated elegance that has stood the test of time. 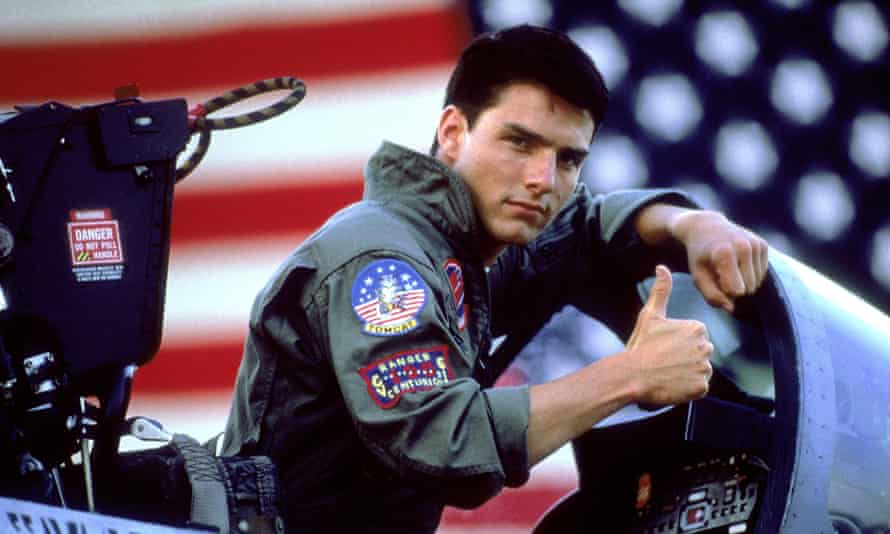 Stills of McGillis teaching class in an oversized white T-shirt with an unstructured dove-grey blazer, or teaming a streamlined version of the leather bomber jacket with a white shirt, dark pencil skirt and red lipstick are still spotted on fashion designers’ backstage moodboards as an icon of grown-up chic. Monica Barbaro, who plays a fighter pilot in the new film, is seen in the trailer playing sports in a crop top – a nod to the iconic beach volleyball scene of the original.

The biggest gamble of Top Gun: Maverick is not whether audiences are still charmed by Cruise, but whether they can still be tempted back into cinemas. As Maverick straps himself in and takes to the skies, a lot is riding on it.