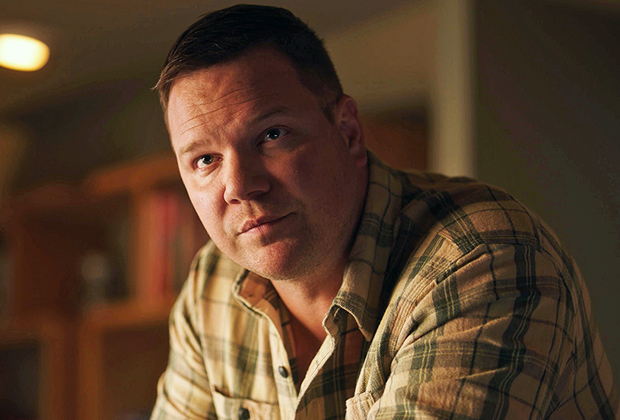 Just one week after 9-1-1: Lone Star made Judd Ryder a father for the first time, the Fox procedural did it all over again.

Monday’s episode introduced Judd to a young man named Wyatt, who claimed to be — wait for it — his son. It turns out that Wyatt’s mother (played by none other than Robyn Lively) had a one-night stand with Judd at a rodeo when he was just 22 years old. And just like that, Judd suddenly had a baby daughter and a grown son.

Elsewhere in the hour, Owen enjoyed a rocky first date with the governor’s chief of staff (played by Amy Acker), while Carlos’ impressive work on an abduction case got the attention of his superior, who suggested he take the detective exam.

Below, Jim Parrack walks TVLine through the specifics of Judd’s big surprise, including what the future may hold for his rapidly growing TV family:

TVLINE | Before we talk about Judd’s first kid, let’s talk about his “first” kid. Charlie might be the cutest baby I’ve ever seen on TV.
I’m going to wholeheartedly agree with that. I was just doing some baby Charlie work yesterday. It’s actually two young men who play that part, one baby named Cody and one named Kobe, and they just cut their front teeth. The last time I saw them, they were all gummy, and then they had new little teeth yesterday!

TVLINE | And how are you and Sierra McClain adjusting to your tiny new co-stars?
Neither of us has had a ton of time with them, but I like it. When you’re working with babies, you usually have what feels like virtually no time to get everything you need before they start crying, but these are really sweet babies. They’re very easy to work with as acting partners.

TVLINE | OK, let’s get to this week’s episode. I have to say, I kept waiting for someone to step in and reveal that Wyatt isn’t really Judd’s son.
I know! That’s exactly how Judd felt in the episode: “Let this be a con, let this be a game, let this be a mistake. Don’t let this really be my son, just weeks after I’ve had my child.” What on earth does he do now?

TVLINE | And what was Jim’s reaction when you found out? I imagine you were told about this before you read it in the script.
I was telling [showrunner Tim Minear] how excited I was to play a father. I’m turning 41, and I’ve gotten to play a dad in a few scenes in things, but I haven’t gotten to tell the story of being a dad yet. As I was telling him this, he said something like, “A father twice over.” I was like, “What the hell are you talking about?” And he said, “What if Judd has an estranged son that shows up weeks after the baby is born?” I couldn’t believe it.

TVLINE | It’s definitely among the harder-to-believe twists, so kudos to all of you for selling it.
Thank you, man. When I look at these stories and scripts, the first responsibility I have is to try and connect to them enough to make people believe that it’s all real.

TVLINE | I guess these things do happen in the real world. People are always crawling out of the woodwork.
Robert Duvall, my acting hero who became kind of a mentor for a while, used to say, “I don’t like it when people talk about things being ‘larger than life.’ Look at life!” I get the point, man. Nothing’s bigger than life. The sky’s the limit.

TVLINE | And how fun to have Robyn Lively on board as Wyatt’s mom. That was a fun surprise.
Oh, she’s terrific. We had a couple of days where we had a few scenes together, and she just folded in with the cast and crew and was such a fun person to be around. She’s doing a terrific job with that part, too. She brings a lot of dignity and strength to it. It could have easily been this disruptive, other-woman role, but her acting makes sure that the audience isn’t concerned about that. This is someone with the best of intentions.

TVLINE | When she gave that speech to Grace about doing anything to protect Wyatt, I respected her — and feared her a little, to be honest.
Yeah, she and Grace are both mama bears. They had that moment where they finally saw eye-to-eye and realized that on some level they’re dealing with the same sort of problems. If you let your defenses down long enough and really listen to where someone else is coming from, you find common ground. Tim structures these stories so that we get these very human moments.

TVLINE | Grace appears to be living up to her name, but has she really made peace with all of this?
Well, let’s just say that it’s the right thing to do, but it doesn’t mean she won’t have feelings about it. You don’t want to look at your husband and some woman and their son. She’s certainly entitled to her feelings about it, but I think she takes the right actions.

TVLINE | And is this the beginning of a long, complicated journey for Judd and Wyatt?
It sure feels like it. I took one look at his face, and I said, “This kid’s far too good looking to be my kid.” You have to have Robyn Lively as the mother to produce a kid like that. Jackson, the actor who plays him, is just an awesome young man. I’m really glad he got this part.

Want To Own Kanye West’s Publishing Catalog? It’s For Sale, But Considering The Annual...

‘House of the Dragon’: Emma D’Arcy and Olivia Cooke on Forgiveness...