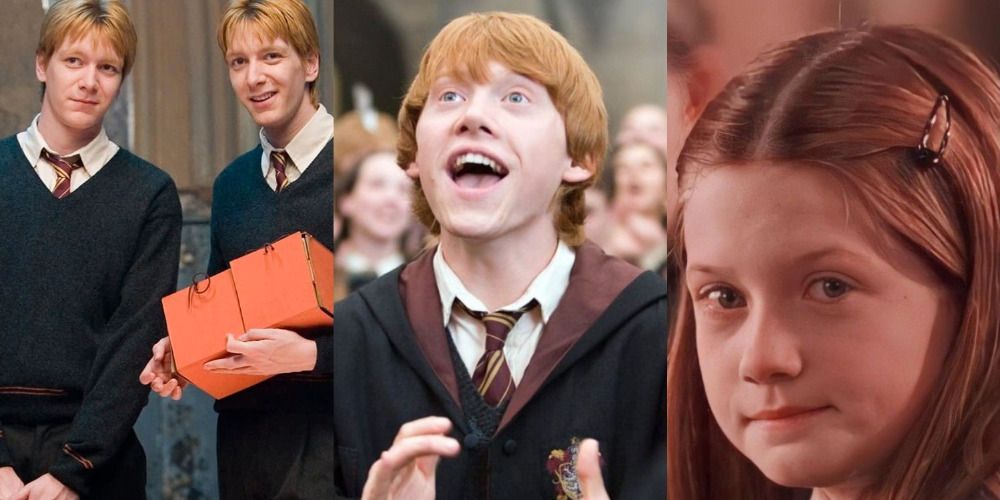 In the wizarding world, the Weasley family was often looked down upon by many higher class wizards and witches, Lucius (Jason Isaacs) and Draco Malfoy (Tom Felton) being two of them. But if you think about it, there wouldn’t be much of a wizarding world without this loveable family of redheads.

Fans of the wildly popular Harry Potter franchise instantly fell in love with this family of pure-bloods. From showing Harry (Daniel Radcliffe) the ropes in Harry Potter and the Philosopher’s Stone to Fred (James Phelps), George (Oliver Phelps), and Ron (Rupert Grint) rescuing him from the Dursley’s home in Chamber of Secrets. This kind-hearted and down-to-earth family became beloved fan favorites right from the start.

Taking Young Harry Under Their Wing

The first time we met the Weasley family was in the franchise’s first installment back in 2001. Right off the bat, Molly Weasley (Julie Walters) put her arm around Harry in a caring gesture when he asked if they could show him how to get onto platform 9 3/4, not hesitating to help him.

Over the years, Molly became a motherly figure to Harry, there for him whenever he needed as if he were one of her sons. This scene was their first on-screen appearance, and fans fell in love with them just as quickly as Harry did. Who wouldn’t want to be a part of this magical family?

Fred and George’s Not So Reassuring Words of Wisdom

After Harry became a seeker for the Gryffindor Quidditch team, Ron revealed that Fred and George were also on the team. While explaining their roles as Beaters, George told Harry, “our job is to make sure you don’t get bloodied up too bad. No promises, though. Rough game, Quidditch.”

Fans grew to love these boys very quickly, and this was one of the first insights into their loveable and cheeky personalities. There was just something about them that made it impossible not to like them. Despite the not so reassuring words of wisdom, you couldn’t help but giggle at their enthusiasm. And the look on Harry’s face after hearing that even if people disappear, they’ll turn up in a month or two.

Whip Your Wands Out For Everything

Have you ever wished you could whip out a magic wand and clean the dishes or do the laundry without actually having to do the task? Well, at some point in every Harry Potter fan’s life, you wished you were the proud owner of one of those handy wooden rods.

RELATED: How the Adaptation of ‘Harry Potter and the Order of the Phoenix’ Succeeded Where the Book Failed

In The Order of the Phoenix, Fred and George are now allowed to use magic outside Hogwarts. These troublemakers, of course, used this to their advantage. They apparated into the room right behind their mother, who screamed, “just because you’re allowed to use magic now does not mean you have to whip your wands out for everything!” From Molly’s fright to the cheeky grins on the twins’ faces, this is just one more reason that you can’t help but love these loveable tricksters.

Fred and George Give Harry the Marauder’s Map

In The Prisoner of Azkaban, the wizarding world introduced the Marauder’s Map. Passing down, as they put it, “the secret to our success,” Fred and George gave Harry the map they’d been using to sneak around Hogwarts since their first year.

The twins always had an act for causing mischief. It was part of their cheeky and loveable personalities, and it’s a big part of what made us love them from very early on. This scene brought one of the most iconic phrases of the franchise. “I solemnly swear that I’m up to no good” and “mischief managed” became beloved quotes that fans still use in their everyday lives even over a decade later.

While this is one of the saddest Weasley family moments, it no doubt proves what amazingly caring people they are. In Harry Potter and the Deathly Hallows Part 1, after the Battle of the Seven Potters, everyone regrouped at The Burrows. During the sky battle, George was injured by a Sectumsempra spell cast by Snape (Alan Rickman), who was aiming at a Death Eater but accidentally struck George instead.

From Molly’s concern at the sight of one of her children injured to Fred’s worry and heartache at seeing his twin brother lying bloodied and weak on the couch, this short but sweet Weasley family moment tugged on everyone’s heartstrings. It was impossible not to fall a little further in love with their bond every time they were on screen.

The Twins Finish Hogwarts With a Bang!

Fred and George were troublemakers and pranksters throughout their years at Hogwarts, never failing to bring a smile to the faces of everyone around them. In Harry Potter and the Goblet of Fire, they pulled off their best prank yet when they finished their time there in classic Weasley twin style.

RELATED: Why ‘Harry Potter and the Goblet of Fire’ is When the Danger Became Real

In an attempt to get back at the very much loathed Dolores Umbridge (Imelda Staunton) but also do something for the students under her power, the boys hatched a plan. They interrupted the O.W.L. exams with a bang, literally, and flew in on their brooms, unleashing fireworks in the exam hall. Their crowning performance ended with a massive fire cracking “W” in the sky. Who wouldn’t want to be friends with these boys?

The Opening of Weasley’s Wizard Wheezes

A magical joke shop? Yes, please. If there was one career the Weasley twins could’ve gone into, it’s no surprise that it involved pranks. Constantly up to no good, these troublemakers decided that their futures lay outside the world of academic achievement.

Following their fireworks display, they opened Weasley’s Wizard Wheezes. These boys would never shy away from encouraging others to join in on their antics. Situated down Diagon Alley, their store quickly became popular, especially among students, as the items sold there would often help them get out of class.

Rescuing Harry From the Dursley’s House

In The Chamber of Secrets, Ron, Fred, and George flew their father’s enchanted car to the Dursleys to rescue Harry. Telling him to hurry, he grabbed his trunk and Hedwig and made a move to leave with them. Seeing them come to save him from his situation made us love them even more.

From Ron wishing Harry a happy birthday to the boys taking him back to their house and welcoming him into their home, they really were the caring and loving family that Harry needed. Also, seeing Vernon Dursley fall out of the window as Fred floored it was an added bonus.

Taking Harry to Their House For the First Time

The first look Harry had into how a real wizard family lived was when he set foot into the Weasley’s home for the first time. Having never known anything other than the environment he’d grown up in, this 12-year-old was undoubtedly in awe of how magical everything was.

Molly wasn’t too happy that her sons had up and disappeared without a trace, which made for some hilarious facial expressions from the boys when she threatened to put bars on Ron’s windows. Despite her annoyance towards her sons, she welcomed Harry into their home for breakfast. And when Arthur came home, he was not only honored to meet him but couldn’t wait to ask him all about Muggles. We never did find out the exact purpose of a rubber ducky.

NEXT: Top Magical Objects From Harry Potter That Would Make Muggle Life Easier

Ruben Randall - August 19, 2022 0
Actress
Sarah Levy showed her appreciation for her husband Graham Outerbridge with the sweetest photo of him and their baby James Eugene. On Wednesday, the...