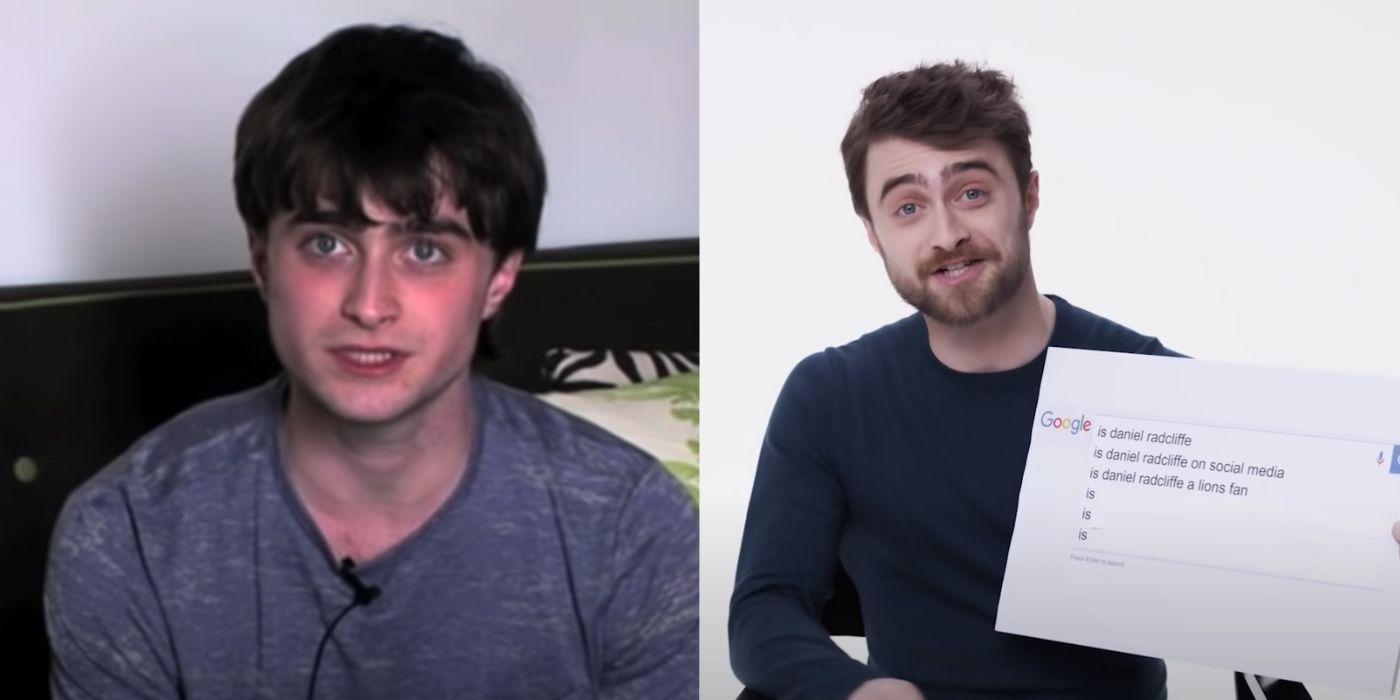 Fans will be seeing Daniel Radcliffe on the big screen again soon, as he stars in Weird: The Al Yankovic Story, which premiered at TIFF on September 8th and will hit the Roku Channel in November. The casting couldn’t be more perfect, as Daniel Radcliffe has proven himself to be a hilarious actor. Throughout his interviews, sketches he’s performed in, and even when answering fan questions, Daniel has great comedic timing that makes him the perfect person for this role.

After garnering a massive fan base due to his Harry Potter role, Daniel has proven to his fans to be a multifaceted actor, as well as extremely likable. During interviews, he easily bounces off the interviewer and rarely lets an awkward moment go by.

“I’m Always Trapped In An Elevator With Daniel Radcliffe …”

While answering questions for GQ, Daniel was asked what it would be like to be trapped in an elevator with himself, to which he gave this hilarious answer. Once again his delivery is everything, and it’s funny how continuously makes jabs at himself.

This is one reason why Daniel Radcliffe is so likable: because he doesn’t take himself too seriously. Radcliffe presumably doesn’t know the questions before the interview starts, so his quickness with these answers is what makes it all the better.

See also  Schwarzenegger and Sons Dress Up Like Yellowstone's "Dutton's"

“Yes, I Would Have Made A Very Good Spider-Man …”

Full quote: “… Not in the films. I just mean in real life, were I granted those powers.”

During the same interview, Daniel answered the question with this quote regarding him being a good Spider-Man. While he didn’t give a reason why he thought he would make a good real-life Spider-Man, his confidence in his answer is what made this moment so funny.

Not many people would wholeheartedly agree straight away that they would make a good superhero, not just for a movie, but in real life. His confidence and excitement at having the question asked, as well as his readiness to answer made this moment quite hilarious.

Full quote: “eating a massive hotdog … and then as soon as he was done, put the stuff away and went to sleep.”

When Daniel Radcliffe was being interviewed by Jimmy Fallon, he told his hilarious story of when he was performing Rosencrantz and Guildenstern Are Dead on stage, he saw an audience member pull out a huge foot-long sandwich from his bag, eat it over the course of two scenes, then proceeded to fall asleep after he’d finished.

Daniel Radcliffe is a great storyteller, and made this story hilarious and had Jimmy Fallon doubled over laughing. His disbelief at how this audience member behaved just made the interview that much funnier.

“Really? People are still asking that? Cool! I’m from England …”

Daniel does an Autocomplete Interview with Wired

Full quote: “… there’s not much to say in that, but I find it flattering that maybe you’ve heard me do an American accent and maybe that’s why you thought I wasn’t British.”

When Daniel was doing Wired’s auto-complete interviews, one of the questions was about where he was from. At this point in his life, all of the Harry Potter movies were out, and it was almost common knowledge where all the cast was from.

His response was hilarious because he acknowledges that it’s surprising that not everyone knows where he’s from, and not only that, but that he thought the only possible reason anyone would still be Googling this was because they saw him doing a convincing American accent.

“I’m not a naturally cool person …”

Daniel talks about jamming with The Roots

Full quote: “…and when I was given the opportunity to perform that with the Roots backing me up the whole time, I just thought well, I will never get another opportunity to do anything this cool ever again.”

Back in 2014, Daniel Radcliffe was on Jimmy Fallon and performed a jaw-dropping performance of Alphabet Aerobics and shocked viewers with his rapping skills. When asked about it on Wired, Daniel said it was the coolest thing that had been offered to him because he didn’t find himself particularly cool.

It was funny for him to address this question because so many people had seen it, (it garnered over 117 million views on YouTube), and as soon as Radcliffe starts to talk about it, he lights up. He ended the quote with “the original is better.”

“When you have an opportunity to annoy the paparazzi…”

Daniel talks about annoying the paps

Full quote: “… or you win a tiny petty victory over them, that’s fun.”

In the same Wired interview, Radcliffe was asked why he wore the same jacket every day. He explained that while doing a play, he decided to wear the same clothes because it would look like all the paparazzi photos were shot on the same day.

This quote is hilarious because, like in his quote, it’s so petty, yet so genius. He clearly has a bone to pick with the paparazzi, understandably so, so speaking about how he could have a small win against them was a funny reveal.

Full quote: “… I’m like a cut-price, much less-efficient version of Lauren.”

Daniel has done some pretty funny skits and “undercover” work for various late-night shows and magazines, and one, in particular, was when he went undercover as the new receptionist at Nylon Magazine. What started out as a funny, photo op crazy morning, devolved into a chaotic and stressful situation for Daniel.

When he started having to do the real duties of the receptionist, he became frazzled and said this hilarious line about who he was, at least recognizing that, as someone who’s never done this style of work, was much less capable at it.

In yet another hilarious moment on Jimmy Fallon, Daniel and Jimmy play a rousing game of, essentially, dodgeball, but with much smaller balls and wearing velcro suits, so the balls stick to them.

After the game finished, Daniel stood with his arms wide and said, “count my balls” to Jimmy. The eye contact he makes with Jimmy is hilarious, and the way he stood there waiting for Jimmy to move was also comedic gold.

“I thought I was an actor playing a wizard …”

When he does a sketch for Funny or Die

Full quote: “… but really, I was a wizard playing an actor.”

In this hilarious sketch with Funny or Die, Daniel does a so-called interview that begins by looking very realistic but then says he’s realized that he is actually Harry Potter, not just the actor who plays him. He then goes into his daily life as a wizard playing an actor, and the delivery is on point.

The sketch works so well because, at first, it seems like it’s just Daniel giving a normal interview, but when he, very convincingly, talks about being Harry Potter, it becomes a hysterical comedy sketch. The sketch shows off his acting skills in a comedic light, something that, at the time, fans had not seen a lot of yet.

Next: Daniel Radcliffe & 9 Other Actors Who Refused To Return To An Iconic Role For A Sequel