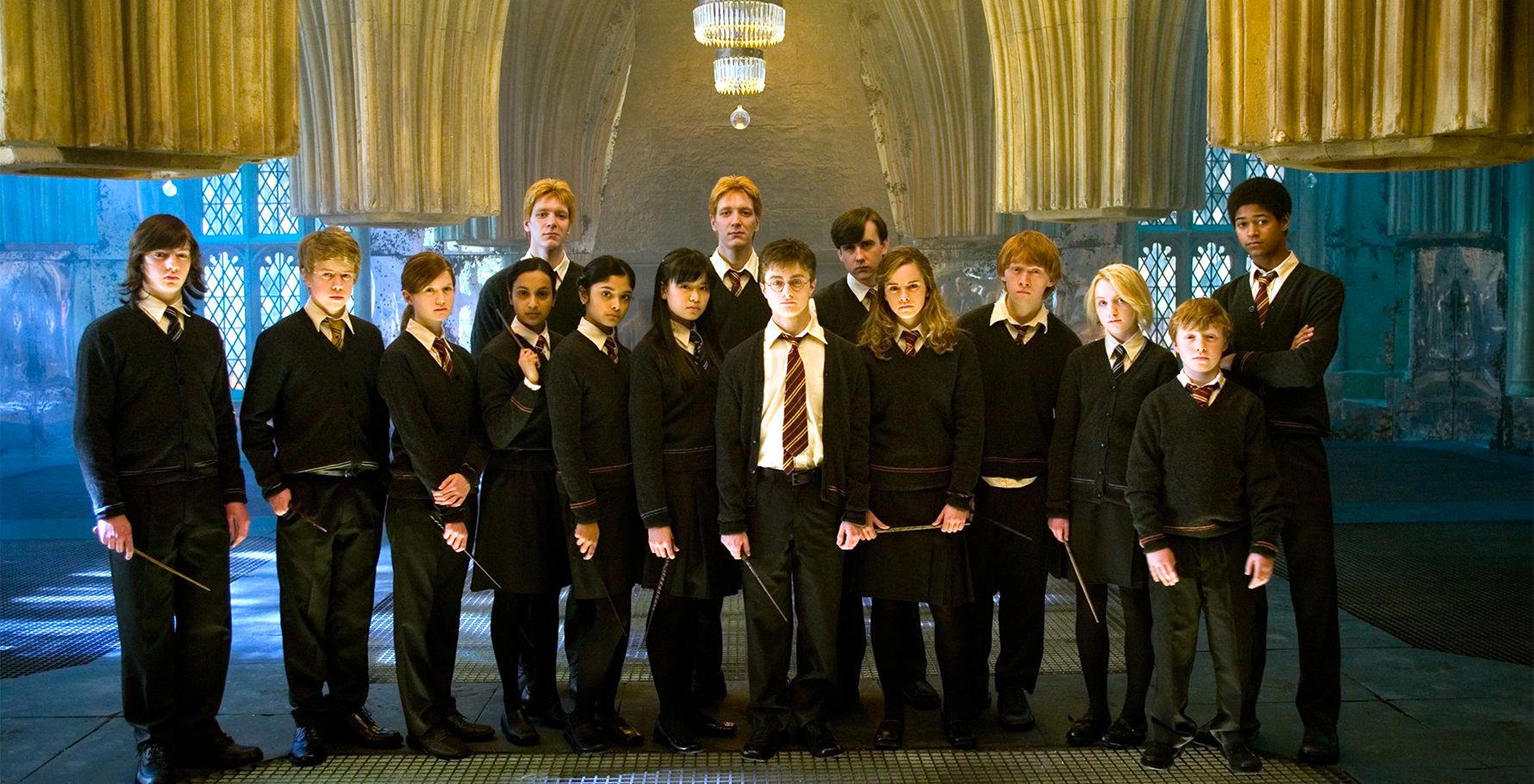 When JK Rowling wrote the Harry Potter series, she created a cast of iconic characters that are so complicated and realistic that people still debate whether or not Rowling paired them off with the right people in her (in)famous Epilogue.

From speculation that Hermione and Ron wouldn’t have been happy for long, to questions like “Who even is Astoria Greengrass?” fans aren’t likely to cool on this subject anytime soon. Now, the Myers-Briggs test isn’t perfect, but it’s definitely a good place to start to find out: Who really are the most compatible characters in the Harry Potter series?

Our eponymous hero Harry Potter is a classic ISFP. He is charming, intuitive, and imaginative…but he’s also easily stressed, unpredictable, and has fluctuating self-esteem throughout the books. ISFPs are often fiercely independent and don’t settle down easily, but once they do, they need to know most of all that they’re appreciated. An ideal match for an ISFP is an ESFJ, whose extraversion and judging traits can help an ISFP grow.

Good thing his wife, Ginny Weasley, is a classic ESFJ. Her extraversion can bring Harry out of the bubble he normally shuts himself in, as we see her do in Order of the Phoenix when Harry is hiding from everyone after Arthur is attacked. Harry’s introvert tendencies and flexibility will always temper Ginny’s hotheaded and stubborn traits. She is an excellent communicator, adventurous, and able to provide the emotional support an ISFP like Harry needs while Harry can be stable ground for an ESJF like Ginny to return home to.

Harry’s best mate Ron, is friendly, enthusiastic, and knows how to relax. In later books, as his self-confidence grows, he becomes extraverted and even popular, but he always stays both emotional and independent to a fault. ENFPs like Ron need someone who can match their enthusiasm and natural curiosity, but who can also get them to do the work. Sound like someone we know? That’s right– ENFJ Hermione Granger, who some argue is the real hero of the series.

Hermione’s organized Judging tendencies balance out Ron’s relaxed demeanor and improvisational Prospecting traits really well. As Intuitive Extraverts, they both have an enthusiastic love for life and are both emotionally intelligent. People wonder whether Ron’s lack of interest in altruism and intellectual pursuits would frustrate overly giving and always-learning Hermione, but their MBTI suggests that Ron’s easy ability to relax could discourage Hermione’s unhealthy workaholic tendencies.

Hot take: In a world where Draco wasn’t taught bigoted views about muggle-borns by his father and was allowed to be a normal teenager instead of an instrument for Voldemort, he and Hermione could be very compatible. Hermione is a natural leader who always wants to help other people. She is able to both think and feel her way through a problem, and she cares just as much for intellectual pursuits as she does the relationships she creates around her. They share an interest in knowledge for knowledge’s sake; we know from JK Rowling’s essay about him that adult Draco has a love for Dark artifacts, but he never uses them, and a deep interest in alchemy, though he never tries to make a Philosopher’s Stone.

See also  'Cafe Minamdang' Episode 7: Seo In Guk Probes the Murder Case of the Girl at the Sewer

RELATED:  20 Things Everyone Gets Wrong About Draco Malfoy

Hermione is a strong ENFJ. Draco, as a more turbulent INTP, matches her natural Intuitive traits, which she needs. Hermione’s Extraversion could help usually Introverted Draco expand his circle of friends, while his Prospecting tendencies could alleviate Hermione’s by-the-book Judging tendencies. Perhaps in a future where Draco gets better at talking about his feelings (even if he continues to prefer Thinking over Feeling) and sincerely apologizes to Hermione for his treatment of her during school and the War, they can at least become friends.

This one may sound a little out there at first, but according to the MBTI Fred Weasley and INFP Luna Lovegood could actually have been good friends…or something more. Fred is an ENFJ like Hermione—a natural-born leader, authentic, and (mostly) altruistic. But his love for a good time gets him into trouble. He needs an INFP like Luna, who is just as creative, idealistic, and passionate as he is, but whose introversion could lend his showmanship some gravity.

Fred’s intelligence and inventiveness creating everything for Weasley’s Wizard Wheezes may make him seem non-conformist and good at improvisation, but he tends to actually be very decisive and dogged, as we see when he chases Ludo Bagman for the money he’s owed, and with his detailed planning for his dramatic exit from Hogwarts. Luna’s flexibility and extreme non-conformity would complement Fred’s creative business pursuits well.

Like Harry and Ginny, the MBTI says that these two are just meant to be. As an ESFJ, Molly’s almost overbearing Extraversion brings warmth and excitement that balances out Arthur’s ISFP tendencies. Where Molly’s Judging tendencies make her the overprotective parent of the whole Weasley clan, Arthur’s Prospecting means he is more relaxed, balancing her need for order with curiosity and fun, as we see through their very different reactions to Fred, George, and Ron borrowing the flying Ford Anglia in Chamber of Secrets.

Molly creates a loving and colorful world where Arthur can safely explore his interests and create meaningful connections with his family, but where he can also retreat to recharge. Arthur loves experimentation, as we see with his obsession over everything Muggle, which draws Molly out of her more traditional wife and mother gender role to explore with him. They not only balance each other out well, but create space for each other to grow.

Did they ever even talk to each other in the books? Fleur was probably too busy trying to win the Triwizard Tournament to notice yet another young Gryffindor, but the MBTI suggests that Fleur’s ESFP personality is ideally matched by Neville’s ISFJ personality. Where Neville is generally shy, Fleur’s people skills and charisma ensure that they would never be lonely. But when Fleur’s flighty personality moves on, Neville could keep her grounded and keep both of them surrounded by loved ones.

Importantly, they share that Observant trait—they’re both practical, focusing on things that they can actually see, feel, and hear. Fleur might use her observations to jump into the next best path like any good Prospector, but Neville’s careful Judging can counteract her hot-headed impulsiveness. Since they both prioritize Feeling over Thinking, they should always be able to cultivate open communication. Too bad Fleur overlooked Neville, huh?

We’re not suggesting these two should be a romantic couple; compatibility goes much further than romance. Snape is a classic INTJ—his double life as a Death Eater/Order Member is only possible because he’s introverted in the extreme and keeps to himself. He’s imaginative and extremely strategic, relentlessly intellectual and frank.But he’s so arrogant that he has trouble connecting with others. Meanwhile, Albus Dumbledore is a classic ENTP. He is also relentlessly intellectual and frank, classic Thinking traits, but the E and P in his MBTI allow him to admit his mistakes and change course, where Snape’s I and J traits make it very difficult for him to do the same. Dumbledore is warm and loving toward a number of people, yet can be intolerant of people with no backbone, as we see with his consistent dismissals of Cornelius Fudge. Dumbledore does not seek the spotlight, but is interested in truth and advancement for their own sake. Snape, too, prefers the flexibility that being in the background allows him and dismisses anything he sees as weakness.

Their key oppositions allow them to see each other very clearly, but their common ground makes them relatable to one another. This compatibility is what makes it possible for Snape to go to Dumbledore to escape Voldemort when he can go to no one else. And their compatibility allows Dumbledore to trust Snape, even when no one else does.

Sirius Black’s MBTI is the hardest to pin down because he changes the most dramatically over the books. Which Sirius is the “real” one—the extraverted, fun-loving, trouble-maker teen that Lupin and Snape remember? Or the withdrawn, depressed, traumatized-by-Azkaban adult that Harry meets? Young Sirius might have been an ENFP, but Adult Sirius is closer to an INTP, despite how he tries to hold onto his emotional vulnerability and love for crowds and excitement for Harry’s sake.

RELATED: Harry Potter: 10 Things In The Movies That Only Make Sense If You Read The Books

But whichever Sirius you’re thinking of, he is most compatible with his childhood friend Remus Lupin. As teens, Lupin’s Introversion, Thinking, and Judging traits might have cautioned Sirius (and James Potter) against their most outlandish acts. As adults Lupin’s own struggles with societal acceptance compound his natural Introversion, which makes him best equipped to handle Sirius’ newfound Introversion after Azkaban. Sirius’ Extraversion and Prospecting might have forced Lupin to break out of his shell as kids, but his Intuition and Prospecting traits in adulthood probably encouraged Lupin to pursue Tonks. A good move, because despite his noted hesitation in Order of the Phoenix, ENFP Tonks is an ideal romantic match for INTJ Lupin.

2 Shouldn’t Work But Does: Fred (ENFJ) and George Weasley (ESFJ)

This might be a surprise since they seem like each other’s equal in many ways, and some people think they’re fundamentally the same. But these twins have key differences that show up in their MBTI indicators–differences that say these two should struggle to get along. Since they’re both creative Extraverts, they should wind each other up to impossible standards, but their careful Judging tendencies should mean they hold each other back on experimenting with new creations for Weasley’s Wizard Wheezes. Even worse, they both prioritize Feeling over Thinking, so when they encounter conflict, they should fight and struggle to get anything done.

And yet, sharing three letters (E, F, J) means that George and Fred are nearly always in sync. Where they differ, that N/S dichotomy, is key—when Fred fails to notice that he’s ruffling feathers, George can come in and sooth. Fred’s Intuition about a situation and dogged determination gets things done, but George’s Observing traits means he notices when to change tactics, as he encourages Fred to do when handling Ludo Bagman. We often see George calmly explaining things to Harry, showing he is slightly more on the Thinking side of the T/F scale than Fred is. According to MBTI, they shouldn’t work, but they do—call it a twin thing.

We don’t see enough of them to know whether either is more Extraverted or Introverted. Lucius’s machinations at the Ministry and with the Weasleys seem like Extraversion at it’s worst, or is it just careful planning and cunning? He is otherwise quiet, playing his cards close to his chest and only speaking in front of Voldemort when necessary. Narcissa is the opposite in public: quiet, reserved, and even cold. But behind closed doors, she could be a social butterfly. She hosts Voldemort in her home even while Lucius is in Azkaban, and she is comfortable going to Snape to ask him for help. We know she is an affectionate and loving mother for Draco. Narcissa is capable of warmth and bravery, as we see when she lies to Voldemort to save Harry. Or is that just cunning as well?

NEXT: Harry Potter: Which Wand Will Choose You Based on Your MBTI


Next
Harry Potter: 10 Hogwarts Students Who Would Make Great Professors


Valorie is a freelance writer living in Los Angeles, CA.