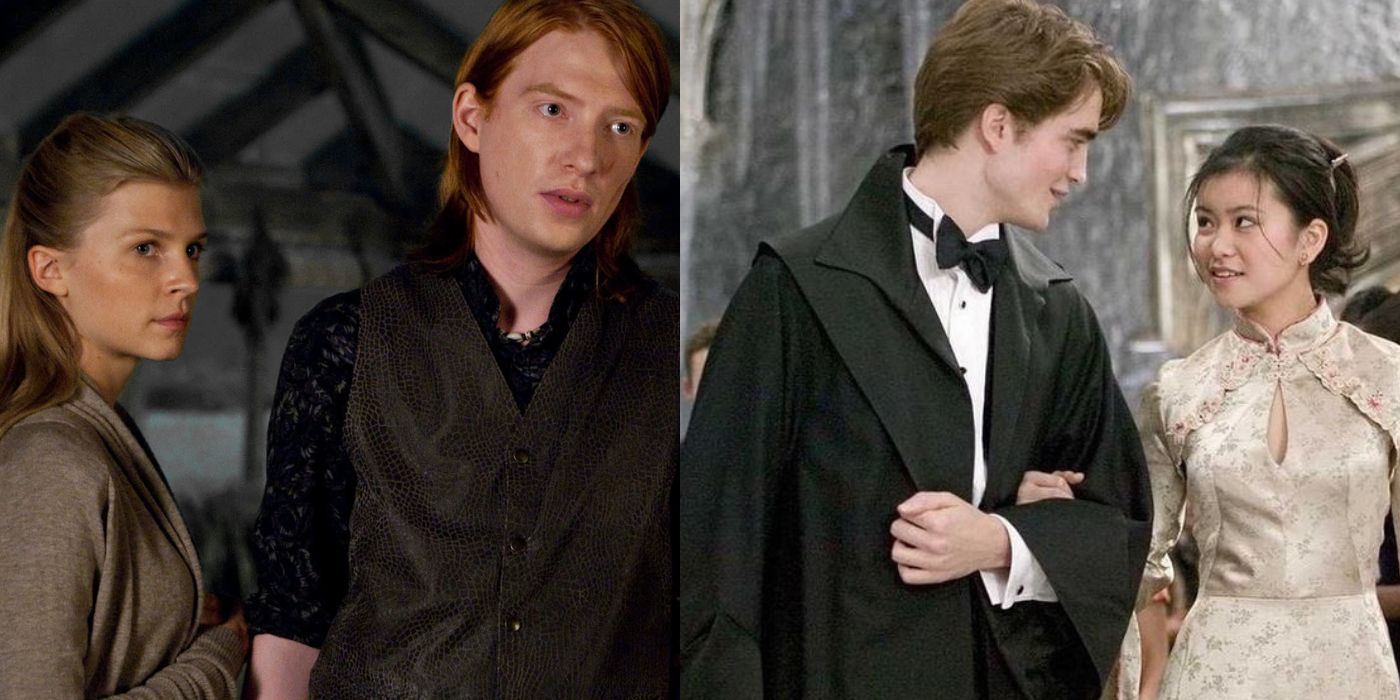 Harry Potter featured so many couples across the movies and books it can be easy to forgot some of the pairings that got less screen time. The latest franchise release, Fantastic Beasts: The Secrets of Dumbledore, explores the importance of relationships, both romantic and friendly, and how influential people can be.

While there are some couples less favorable than others for fans (Vernon and Petunia Dursley come to mind), there are others that don’t get as much love from fans as they should. Some are simply forgotten in the grand scheme of the events, but here’s a reminder why these couples deserve more attention.

Ginny and Dean were clearly mismatched from the start. Their personalities clashed, they were always getting on each others nerves, but deep down there was respect and adoration for each other. Ginny eventually dumps Dean claiming he was too clingy, but their relationship is a perfect example of a first teenage relationship.

RELATED: Harry Potter – 10 Memes That Sum Up The Hogwarts Staff

Fans almost forget entirely that these two were together, however the relationship was fundamental as building blocks for Ginny’s relationship with Harry later on. They might have been a little cringy, but they were teenagers so it comes with the territory.

Hermione and Viktor were never destined to last forever, but that doesn’t mean they should be overlooked all together. Viktor’s obvious attraction and appreciation for Hermione was a surprise for her, and Ron apparently, but his motives were nothing but kind.

They clearly enjoyed their time together at the Yule Ball, up until Ron’s argument ruined the evening, but Hermione must have had a mutual attraction to Viktor to accept his invitation. Their romance was short lived, but they were a cute couple, reminiscent of young love.

Harry spends a considerable chunk of time trying to chase Cho in Goblet Of Fire, and is devastated when he learns that she accepted an invite to the Yule Ball from Cedric. In the end, the two do get together, although they’re both wrapped up in the grief of Cedric’s death and don’t last long.

Cedric and Cho seemed well matched for each other from the get go. They were both kind, patient, and understanding. Their interactions, much like Hermione and Viktor’s, were few and far between, but every time fans watched them on screen or read about them, it was sweet.

Cho was devastated by Cedric’s death, as was everyone else. It was made clear after his murder the true feelings she harboured for him, making it even more bittersweet seeing how little time they had together. They’re often forgotten about by fans, seeing as Harry was trying to ask Cho out for the majority of Goblet Of Fire, but they did make a cute couple.

There’s something incredibly complex and interesting about Angelina’s relationships with the Weasley twins. She eventually marries George, but she attends the Yule Ball with Fred.

While fans see little of her and Fred’s time at the Yule Ball, they’ve become an underrated fan favourite thanks to fanfiction and fanart. Her eventually marriage to George makes her short lived relationship with Fred something that’s forgotten about, but from the limited interactions viewers saw of her relationship with Fred makes it one not to be forgotten.

Arguably one of the biggest surprise pairings of the books and the movies, Bill and Fleur find each other sometime after the events of Goblet Of Fire. Fleur is fiercely protective of her husband and their love for each other is never in doubt, as is made clear in their wedding scene in Deathly Hallows.

While book fans might have been treated to a little more of a glimpse into their life, their romance on screen is limited. Fans have overlooked this couple in the past, but they’ve cemented themselves as one of the healthiest, heartwarming, and strongest underrated couples of the series that deserve more love.

Bittersweet and short lived seems to be a common theme of these couples. Tonks and Lupin were quick to meet and fall in love, and unfortunately quick to sacrifice themselves at The Battle of Hogwarts.

Lupin was the opposite of Tonks. He was melancholy, soft-spoken, and convinced he’d never fall in love, whereas Tonks was outspoken and surrounded by love. The two were fated to meet, and had an incredible whirlwind romance that is too often ignored. Their love story was one of hope and loving despite the odds, something that should be celebrated.

Molly and Arthur are the definition of an admirable couple. They’ve survived every thing live has thrown at them, raised a family, and fought for what was right when it mattered. They were always the backbone of Harry’s time at the Weasley house, and provided him with the image of what a family should be.

They aren’t spoken about as much as some other couples, namely Lily and James Potter, but they have a lasting legacy. There are a hundred things that could be said about Molly and Arthur, but putting it simply, their love lasted. They were stable, strong and absolutely deserve more love from the fans.

NEXT: Harry Potter – 8 Unpopular Opinions About Hogwarts, According To Reddit

I begged Santa — let Trump lead the Republican Party to...

Ruben Randall - December 28, 2022 0
Celebrity
Prognostication is thankless work, especially when it comes to politics.But because it's the happy holiday season, I'm going to pay a little attention...