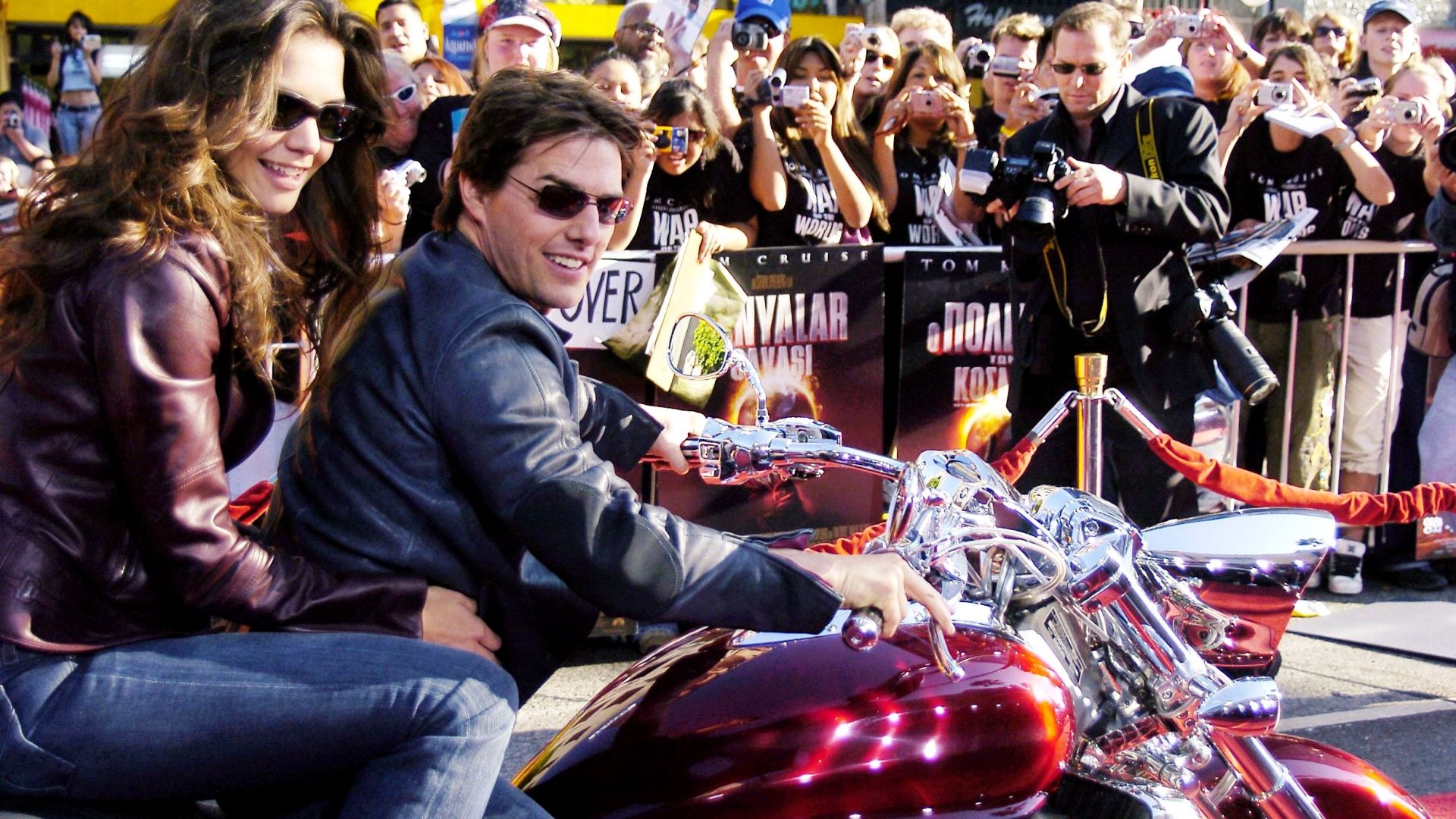 Tom Cruise, 60, is a name that really needs no introduction. With, the Hollywood superstar’s movies having grossed more than $10.1 billion globally and a current net worth of over $600 million, it goes without saying that Tom Cruise like so many celebrities who love bikes; has a garage filled with hundreds of thousands of dollars worth of limited-edition, record-breaking jewels that should leave you in no doubt about him being one of the highest-paid actors around.

From Maverick in Top Gun to Ethan in Mission Impossible, we love the man as he loves to perform his own stunts on screen, but did you know that the man also enjoys the same action-packedlifestyle in the real world as well? His impressive collection of vehicles – which even includes the priciest production motorcycle in the world – should unquestionably prove that. While the cover of this feature has Tom Cruise and Katie Holmes on a Honda Valkyrie Rune, it is unlcear if he owns it. In this post, we’ll dig a little deeper into five of the rarest motorcycles in his collection.

TOPSPEED VIDEO OF THE DAY

Since Top Gun was the movie that basically helped Cruise’s career to take off in a big way, it only makes sense that he would hold the iconic Kawasaki GPZ900R, featured in the film. In the 1986 classic, Cruise used the bike extensively to show off his biker attitude and skills, aside from being a daring fighter pilot that is. In the 2022 sequel ‘Maverick’, the GPZ900R (also remembered as the Ninja GPZ900) was replaced by the Kawasaki Ninja H2R, but Cruise was apparently impressed enough by the original to purchase a model for his personal collection.

A studio shot of a Kawasaki GPZ900R

With a top speed of 248 kmph, the middleweight motorcycle’s most innovative feature was its engine: for the first time in history, a production motorcycle was fitted with a liquid-cooled inline four-cylinder with a 16-valve cylinder head. The GPZ had a cubic capacity of 908cc and delivered a high power output of 115 horsepower. It also had a new timing system, bringing the chain from the usual central part of the cylinder block to the left side of it (not needing cooling fins), a peculiarity that achieved a narrower engine on one hand and easier maintenance on the other. Today we can confidently say that its revolutionary design directly inspired the modern sportbike.

Ducati is a world-famous Italian motorcycle manufacturer that has been in business since the 1950s. It is a well-known brand with an enviable reputation for producing sleek, high-performance machines. The Ducati 999R was introduced as a limited edition model in 2003 – only 200 exist in the world. One of them has made its way into Tom Cruise’s collection, and it is said to be a beauty. In the case of the 999R, the Italian brand was looking for a competitive bike for the World SBK, so they created one which was 25 pounds lighter and had 20 horsepower more than its younger sister – the 999S.

Both the S and the R had titanium connecting rods and cup-shaped crankcases to avoid problems with lack of oil pressure in extreme conditions, with the S fused at high pressure and the R fused at low pressure in a sand mold. The R is considered one of the most powerful motorcycles ever produced, powered by the super advanced Testastretta engine and equipped with a 6-speed gearbox; the top speed is an astounding 179 miles per hour. For his 46th birthday, Cruise got a gray version of the machine.

The Triumph Bonneville Scrambler MI3 was built specifically for Mission Impossible III. Triumph’s design brief called for emulating the vintage design of the late 1960s model while utilizing the greatest contemporary technology in the engine, transmission, and running gear. The motor unit had to be an air-cooled parallel twin with a 360-degree crankshaft in order to replicate the sound and feel of the original, and applying identical standards to the cycling parts required wire-spoked wheels and a twin-shock rear end.

The new eight-valve engine – which had an initial displacement of 790cc – was larger than any previous Bonneville; additionally, while the original model could also have used a balancer shaft, in this Triumph was felt absolutely necessary to reduce vibration caused by the old engine configuration. Once filming was over, it headed to auction, where the eventual buyer was none other than Cruise himself. By all accounts, Cruise spent $29,250 for his new ride.

While Confederate Motors may be a small operation with a limited reach, it clearly knows how to attract attention, not to mention celebrities: for one, in addition to Cruise, Brad Pitt is in fact also said to be a big fan. It was Cruise’s Confederate Hellcat that got everyone moving when he made his dramatic entrance to the premiere of “Mission Impossible 3” on the back of a motorcycle.

A studio shot of a Confederate Hellcat

The machine is a sight to behold with its one-of-a-kind and revolutionary design. It is packed with more technology and engineering than you think possible, and is described as an “all-American motorcycle.” This motorcycle was built to impress, with its 2.2-liter engine and a top speed of 121 mph. It is also credited as one of the most reliable motorcycles ever made, which may explain its $65,000 price tag.

Finally, if we’re looking into Tom Cruise’s motorcycle collection, we can’t forget the frankly bonkers and weird Vyrus 987 C3 4V. This bike – designed by Ascanio Rodorigo – aesthetically has a strong resemblance to its predecessors, but it definitely stands out for the innovations in its steering system, which increase the performance and safety of the front axle. In addition, to aid riding, the bike is equipped with a data acquisition system that acts as a control unit and detects the rider’s riding ability, adapting the engine as necessary to make riding easier.

There’s no denying that this is a beast of a bike, with a 1.2-liter engine and a top speed of 209 mph. Despite its power, it is still incredibly light and easy to handle, weighing only 154 kg – possibly making it one of the lightest bikes available of its kind. The motorcycle made its debut at Cruise’s 51st birthday party at the Chateau Marmont Hotel, where its quick start made headlines. The Vyrus 987 (which, by the way, is the world’s most powerful production motorcycle) is worth an astronomical $103,769, making it also one the most expensive motorcycle in the world.

See also  What Is Kumail Nanjiani's Net Worth In 2022?

Fresh off a $440 million raise, iCapital CEO Lawrence Calcano is...