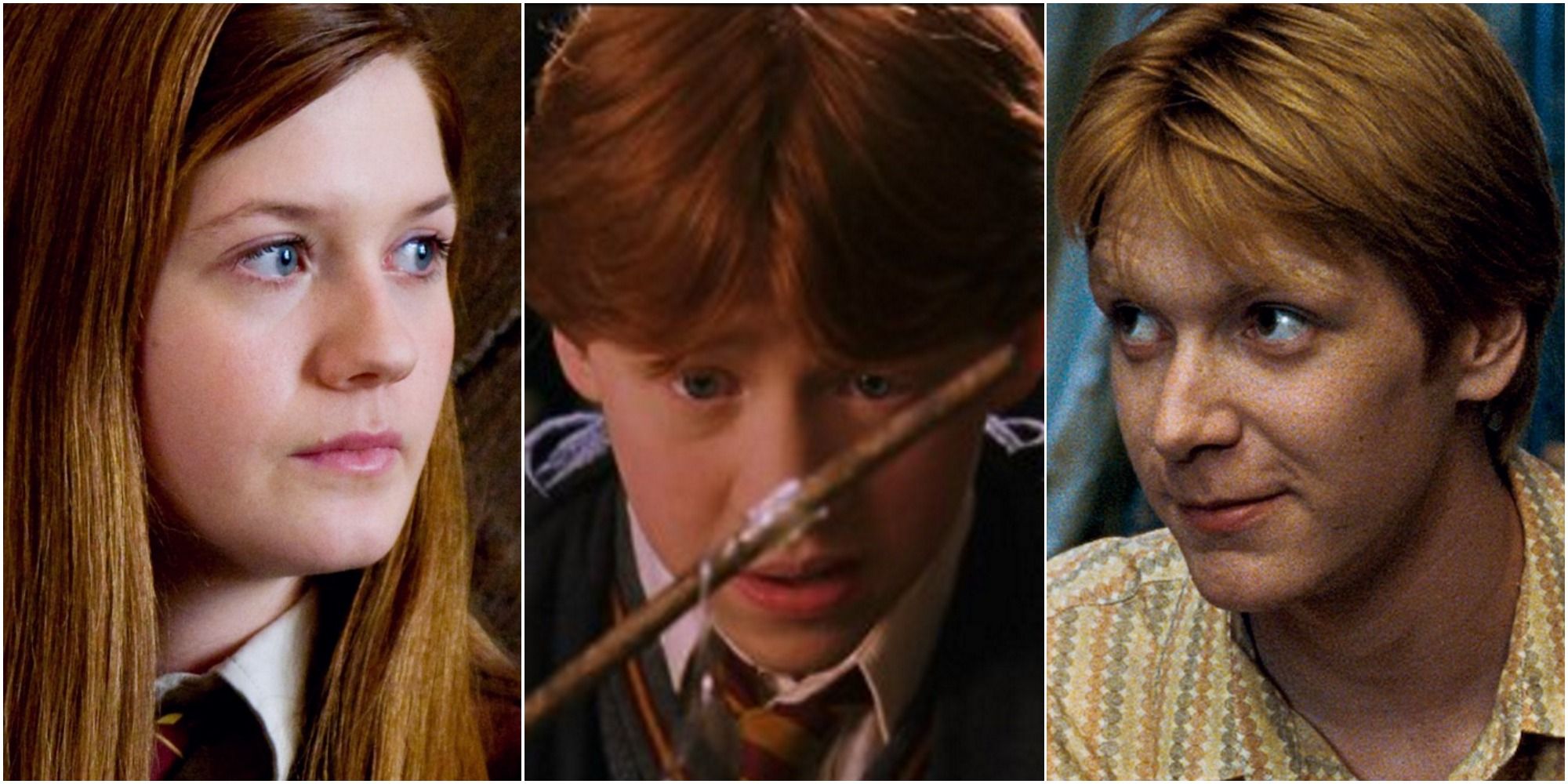 When Harry Potter first joins the Wizarding World, he is overwhelmed both by his reputation and by not having any real emotional support to cope with it. The protagonist of J.K. Rowling’s famous fantasy series is raised in an abusive household, constantly berated for his magic, and left friendless. Fortunately, the Weasley family steps in.

After Harry meets and befriends Ron Weasley on the Hogwarts Express, Ron’s family quickly begins to become very important. As the story progresses, Harry Potter fans learn more and more about the Weasleys and their quirks. Belonging to the notorious family of redheads comes with many advantages, but also numerous challenges.

10 PERK: The Weasleys Rely On A Large & Welcoming Family

The thing that defines the Weasley family is the level of kindness and warmth they always display toward each other. Naturally, they aren’t perfect people. Molly tends to smother her children too much and Percy’s ambition alienates him from the other Weasleys.

But in the end, they do support each other, and even Percy makes amends with his parents and siblings. The bond between the Weasleys is genuinely impressive and something to be appreciated. It shines as one of the most important elements in the series.

9 HARSH REALITY: They Can’t Always Afford To Satisfactorily Provide For Each Child

Having a large family can be great, but it isn’t always easy. Arthur Weasley’s Ministry job doesn’t pay nearly enough for him to properly provide for his family, and with Molly being a housewife, she cannot help financially. This is a huge disadvantage for the children.

Ron feels the weight of his own poverty, particularly after he receives a second-hand wand that used to belong to his brother Charlie. At one point, the only thing that keeps it together is Spellotape. It’s highly dangerous, as evidenced by Gilderoy Lockhart’s fate upon attempting to cast a Forgetfulness Charm with it. A similar, if not quite as risky, incident occurs in Ron’s fourth year, when Ron is forced to wear old-fashioned robes at the Yule Ball.

8 PERK: The Enchanted Ford Anglia Is A Perfect Way To Get Out Of Trouble

The Weasleys may not be wealthy but the belongings they do have are charming and iconic. One of the best examples is the family car. The blue Ford Anglia is enchanted to fly and can become invisible, additions made by Ron’s father, Arthur. It is also modified to be very roomy, capable of fitting eight people, their luggage, and their pets in comfort.

The flying Ford Anglia is notable for having been stolen by the Weasley twins when they come to retrieve Harry from the Dursleys. Ron Weasley also sneaks away with it when he and Harry miss the Hogwarts Express due to Dobby’s intervention. They crash the car into the Whomping Willow, but later, it comes to their aid while they are on the run from Aragog.

7 HARSH REALITY: Their Love For Muggles Marks Them As Blood Traitors

Despite being a pure-blood family and one of the members of the Sacred Twenty-Eight, the Weasleys display a very welcoming attitude toward Muggleborns. They are also very accepting of Muggles, far more so than a regular wizard. Arthur is in fact fascinated with Muggle inventions, and a source of much hilarity in Harry Potter is his attempt to discover the role of more unusual objects.

However, this love for Muggles isn’t always a good thing. They are proud of it but it marks them as blood traitors among their own kind, which isn’t a pleasant situation to be in. Additionally, Arthur doesn’t always seem to realize the fact that Muggles could genuinely be dangerous for a wizard. He is definitely well-intentioned but he and Molly don’t grasp just how much damage the Dursleys have done to Harry.

6 PERK: The Burrow Is Always Welcoming & Full Of Warmth

The family home of the Weasleys, the Burrow isn’t exactly a luxurious mansion. It is described as a stone pigpen, expanded with rooms on top. The structure is apparently held up by magic and is incredibly cluttered. But the Burrow is as homey and comfortable as it is weird.

There is always room for a guest in need, even if the Weasleys themselves wouldn’t have the financial means to provide accommodation. The Burrow is a magical, chaotic, but comforting home, much like the family that owns it.

5 HARSH REALITY: The Family Pet Is Secretly A Death Eater

As welcoming as the Burrow may be, it holds its fair share of dark secrets—ones that have nothing to do with the ghoul in the attic. Shortly after the first fall of Voldemort, Percy finds a rat and adopts it as his pet. The creature, called Scabbers, is later inherited by Ron, who takes it to Hogwarts with him.

Shockingly, the rat turns out to be the Death Eater Peter Pettigrew, hiding in his animagus form. Originally the Secret Keeper of the Potters, he betrays them to Voldemort, then blames Sirius Black for his crimes. Once the truth comes to light, the Weasleys are understandably horrified. Fans also remember with disgust that Ron has held Scabbers—a grown man—in his lap.

4 PERK: The Family Clock Keeps The Weasleys Informed About Each Other

Molly’s love and concern for her family are best illustrated by the family clock. Instead of hands to tell the time, the clock holds nine hands for each member of the family.

The hands point to different locations, like school, work, or home. A more alarming addition is ‘mortal peril’. The hands of the clock constantly lean in that direction after the resurrection of Voldemort, prompting Molly to always carry the clock with her.

3 HARSH REALITY: The Only Girl In The Family Is Possessed By Voldemort

Ginny Weasley is the first girl to have been born in the family in generations. She has a close and loving relationship with most of the other Weasleys, though she and her brother Ron can get into vicious fights. Tragically, in Ginny’s first year at Hogwarts, she comes in contact with Tom Riddle’s diary.

The Horcrux—given to Ginny by Lucius Malfoy—possesses her and forces her to open the Chamber of Secrets. It comes very close to killing her. Fortunately, Harry intervenes and saves her life, but the experience is scarring for both Ginny and the family.

2 PERK: They Adopt Harry Potter Within Their Fold

As Harry and Ron’s friendship develops, the Weasleys practically become Harry’s surrogate family. While Sirius Black is probably the closest thing Harry has to a parent, Arthur and Molly come very close. Molly is clearly a maternal figure and often treats Harry as if he were her own child, her overprotectiveness extending toward him even in moments when he may not want it to.

Molly’s love for Harry reflects in the form of her Boggart. Her worst fear is the death of her family, and within the Boggart, she sees Harry’s dead body, alongside those of her other family members. Harry reciprocates their feelings. He even marries Ginny after the war, and his addition to the family is welcome on both sides.

1 HARSH REALITY: They Lose An Important Member Of The Family After The War

The Second Wizarding War ends with a win for the side of the Light, and with Voldemort’s final destruction. But victory doesn’t come cheap, and the Weasleys have to pay a very personal price. Fred Weasley is killed in the Battle of Hogwarts by the Death Eater Antonin Dolohov.

Percy is later shown racing after the dark wizard to avenge his brother. The whole family takes a serious hit, with Fred’s twin, George, being particularly grief-stricken. He never truly recovers from his loss.

100 worst horror films of all time

Ruben Randall - October 9, 2022 0
Money
Joseph Bien-Kahn, Abby Monteil Baby Way Productions In the difficult economics of present-day Hollywood (where superhero movies and Dwayne "The Rock" Johnson seem to be the...