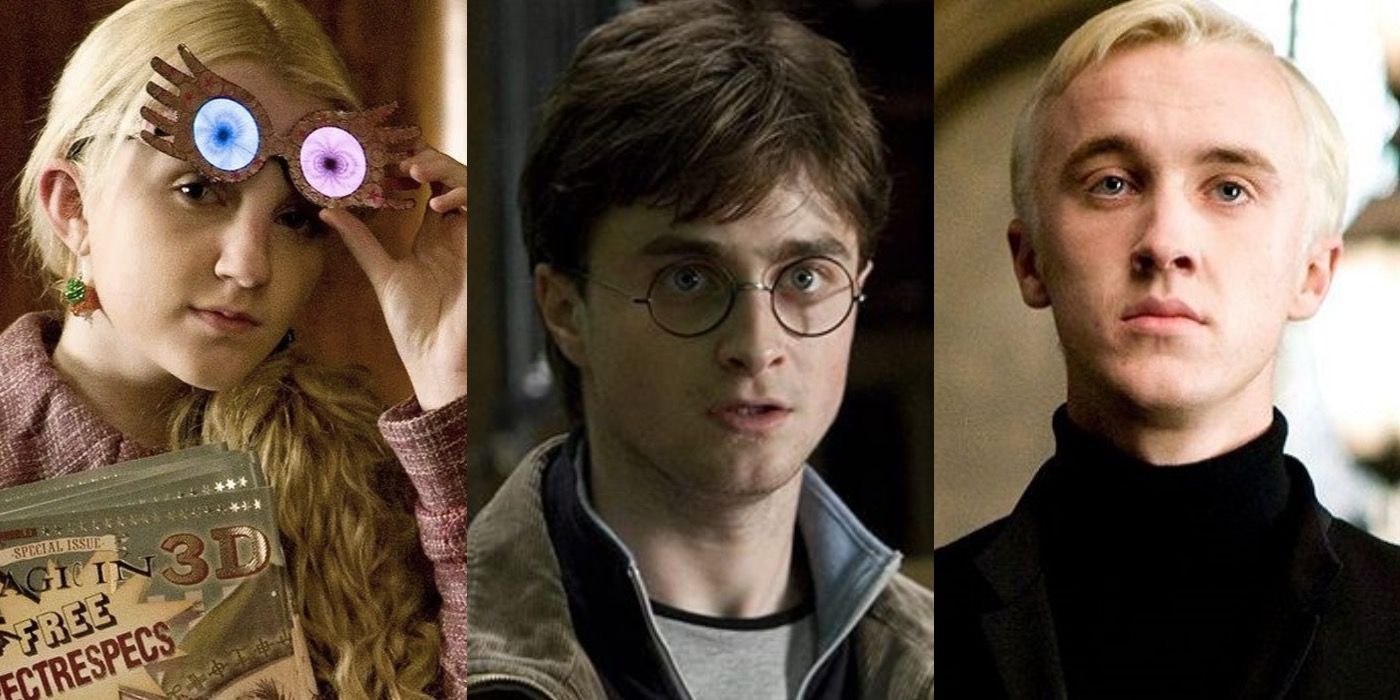 Everyone knows Harry Potter is a very talented wizard. After all, he managed to survive Lord Voldemort’s attacks on multiple occasions until he finally defeated the Dark Lord. Granted, many times Harry was lucky, but luck wouldn’t have been enough if he wasn’t also brave, quick on his feet, and a smart wizard who always learned from his own mistakes.

Although he’s the Chosen One, Harry isn’t the only wizard on the Potter Universe with great battling skills and proficiency in magic. During his time at Hogwarts, Harry met all kinds of wizards. Some of them match Harry’s level of skill, especially in battle, while others were simply not as good as the Boy Who Lived.

Fred and George Weasley are Ron’s prankster twin brothers. They’re two smart, witty, and fun Gryffindors who are always close to the Golden Trio up until they leave Hogwarts to open their store, Weasleys’ Wizard Wheezes. Unfortunately, Fred dies in the Battle of Hogwarts, but before this happens, he and his brother are just as skilled as Harry.

Even though the Weasley twins decide not to finish their magical education, they’re far from ignorant, especially when it comes to charms. Their skills with magic even allowed them to create magical objects to sell in their store. Additionally, they’re two prodigious Quidditch players. Together with Harry, they make the Gryffindor team one of the best of all time.

Zacharias Smith is a pessimistic and cynical Hufflepuff student who joined the Dumbledore’s Army after he heard Ernie MacMillan and Hanna Abbott talk about it. However, he was far from a proactive member, constantly criticizing Harry’s teachings even though he wasn’t able to produce a corporeal Patronus.

Courage and loyalty are probably Harry’s most important traits. Unfortunately, Zacharias Smith has none. After Hogwarts was attacked, he didn’t join the Dumbledore’s Army against Voldemort. In fact, he was last seen fleeing the castle alongside his father.

When Harry first met Neville, the Longbottom kid was a mess. He wasn’t academically skilled and his anxiety caused him to fail in class constantly. Ultimately, Hermione always rescued him. However, as he grew up, his courage and self-confidence blossomed and he gave his everything in training, slowly and steadily improving his magical skills.

By the end of the saga, Neville was just as good as Harry in battle. He even killed Nagini, proving his worth as a Gryffindor. Not only was he Harry’s equal according to Trelawney’s first prophecy, but he was also as proficient, brave, and dutiful as the Boy Who Lived.

Seamus Finnigan is a half-blood wizard of Irish descendant who studied with Harry at Hogwarts. Although he wasn’t exactly close to Harry, he was always around alongside his best friend, Dean Thomas. Since Seamus was a Gryffindor, he and Harry shared the Boys’ Dormitory.

Above everything else, Seamus Finnigan was an expert at blowing things up. This destructive skill was only useful on one occasion — when McGonagall tasked him with exploding the Hogwarts Viaduct. Apart from this, he spent the whole saga dealing with his mediocre magical skills, which never came even close to Harry’s.

The youngest of seven siblings and the only girl, Ginny Weasley learned to defend herself from a young age. To survive in her household, she became an independent, smart and tough girl, who never shied away from standing up for herself. What’s more, she was always a talented witch, especially proficient in curses.

More than once, Ginny showed to Harry, Ron, and Hermione her worth as an ally in battle. In the Battle of the Department of Mysteries, the Battle of the Astronomy Tower, and the Battle of Hogwarts, Ginny fought courageously. She never needed help even when facing truly dangerous threats like Bellatrix Lestrange. Undoubtedly, the younger Weasley was always the right match for Harry Potter.

Vincent Crabbe and Gregory Goyle were Draco Malfoy’s minions, two pure-blood wizards whose families belonged to the Death Eaters. Both Slytherin, Crabbe and Goyle were never smart. They were lazy and gluttonous. Often, when asked something, their answers were slow and even Angelina Johnson described them as “not bright enough to tell one end of a broom from another.”

During their time in Hogwarts, Crabbe and Goyle never succeded at anything but Cruciatus curses, according to Neville. As they grew up, they became better at dueling and Dark Arts, but only due to their sadistic tendencies. All in all, their abilities were never enough to be compared with Harry’s. The Boy Who Lived and his allies were always able to fool Crabbe and Goyle with no problem.

Cedric Diggory was a Hufflepuff student a couple of years older than Harry. He was a great Quidditch player, a prefect, and an excellent student. All in all, one of Hogwarts’ most popular Golden Children. Since he and Harry were Hogwarts’ champions in the Triwizard Tournament, he represented a great challenge for the Chosen One. During the tournament, Cedric showed he was a very skilled wizard.

For instance, he transformed a rock into a labrador during the first task. He also successfully used the Bubble-Head Charm to be able to breathe underwater during the second task. Ultimately, Cedric and Harry tied in the third task. Since the cup was a Portkey, this cost Cedric his life. If he hadn’t been murdered by Voldemort, Cedric would’ve been one of the brightest wizards of his time.

A Beauxbatons’ student, Fleur Delacour was a Part-Veela French girl who competed in the Triwizard Tournament against Harry Potter, Cedric Diggory, and Victor Krum. She was an arrogant but glamorous girl, often blunt when communicating with others. Regardless, she was also soft with the people she loved, like her husband Bill Weasley and her sister, Gabrielle.

RELATED: Harry Potter: 10 Wizards Who Should Have Been Muggles

Although she was smart, Fleur’s performance in the Triwizard Tournament left much to be desired. For instance, she managed to retrieve the golden egg in the first task, but the dragon set her skirt on fire. In the second task, her anxiety got the best of her and she didn’t manage to rescue her sister. In fact, Harry did it for her. Both poor performances landed her in the last place going into the third task while Harry snatched the first place.

Even though a lot of people underestimated Luna Lovegood for her kooky attitude, she turned out to be a great duelist, a courageous girl, and a very smart Ravenclaw witch. Luna was a skillful member of Dumbledore’s Army who helped Harry during the Battle of the Department of Mysteries and bravely fought in the Battle of Hogwarts.

During her time in Dumbledore’s Army, Luna learned a lot of difficult spells, including the Patronus Charm, a very advanced defensive charm that not all her schoolmates mastered. She also managed to use non-verbal magic, the most difficult form of magic, to stunt Alecto Carrow. In addition to this, she was a clever girl who gave great advice. All in all, Luna always proved she was way better than everyone believed. Harry always acknowledged her wisdom and her abilities.

One of Harry’s first enemies, Draco Malfoy is a pure-blood wizard who takes special pride in his heritage. Since Harry looks down on him from the very beginning after noticing his attitude, Draco spends the whole saga harboring hostility between them, which then turns into a serious rivalry when the Malfoy kid joins the Death Eaters.

Time after time, when Draco faced Harry (and his friends), he fell short unless someone helped him. For instance, he was only better at Potions because Snape was assisting him. Draco clearly had an advantage over Harry when they dueled in their second year. However, when he dueled Harry for the last time, the Boy Who Lived was ultimately faster. Although he isn’t particularly bad at magic, Draco was never as good as Harry Potter himself.

NEXT: 10 Harry Potter Spells We Wish We Could Do In Real Life


Next
Every Character In Encanto, Sorted Into Their Hogwarts House


Mayra García is a Comic Lists Writer for CBR. Her main interests include linguistics, superheroes, and food.

Teen Moms who TWIN with their kids featuring Jenelle Evans and...

Ruben Randall - October 8, 2021 0
TV/Movies
TEEN Mom fans have seen the transformation of the children on the show from newborns to teens and all ages in between. Many viewers...