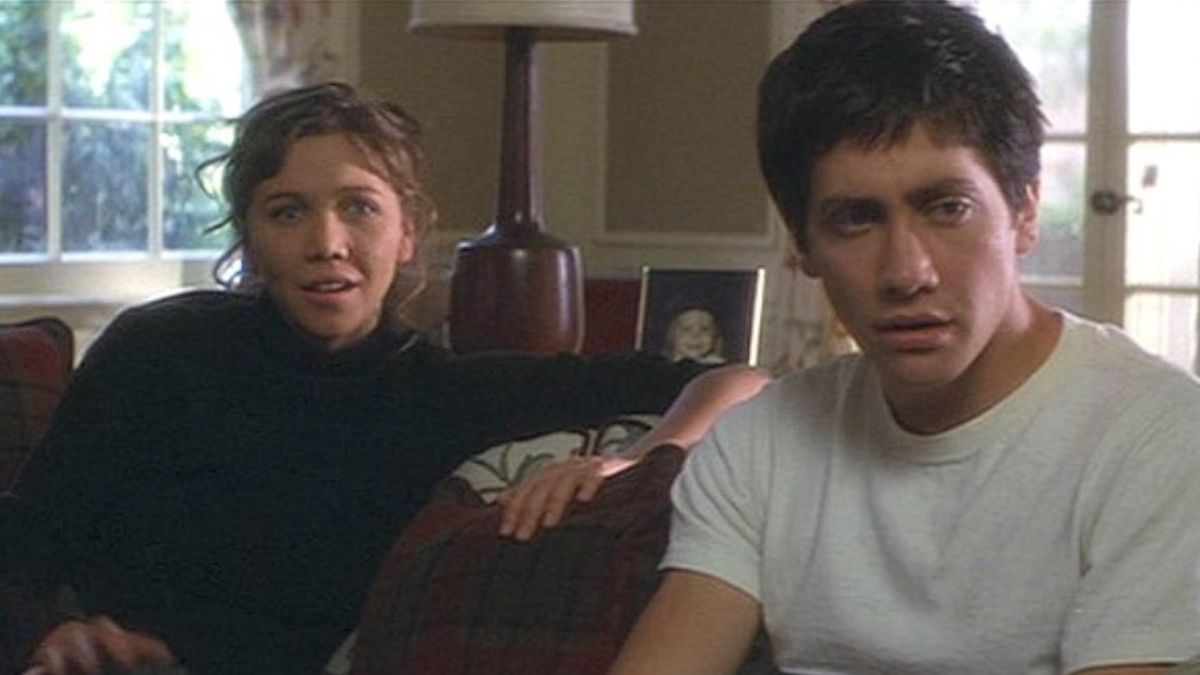 Oscar nominee Jake Gyllenhaal and his twice-nominated older sister, Maggie, are in three movies together: 1993’s A Dangerous Woman, 1998’s Homegrown (both were directed by their father, Stephen), and the eventual sci-fi cult classic, Donnie Darko, in 2001.

Oscar winner Jeff Bridges and his older brother, Beau, also played siblings in The Fabulous Baker Boys – a 1989 comedy in which the titular musicians become rivals after teaming up with a beautiful aspiring singer (Michelle Pfieffer).

Kate Mara of the House of Cards cast led the 2005 straight-to-video slasher, Urban Legends: Bloody Mary, in which her younger sister, Nightmare Alley’s Rooney Mara, made her acting debut.

Owen Wilson and his younger sibling, Luke have also acted alongside their eldest brother, Andrew, in 1996’s Bottle Rocket and The Royal Tenenbaums from 2001 – both of which Owen also co-wrote with director Wes Anderson.

Chris Hemsworth has yet to star in anything with his little bro, Liam, but the Australian Marvel movie star’s older bother, Westworld star Luke, did show up in Thor: Ragnarok as a dramatized version of the God of Thunder, whom he is set to reprise (along with Matt Damon as “Actor Loki”) in Thor: Love and Thunder.

Twin brothers Dylan and Cole Sprouse (the latter of which went on to join the Riverdale cast) have shared the same role in several TV shows (most notably Grace Under Fire) and movies (such as Big Daddy with Adam Sandler) and have played siblings just as often, most famously as the title characters of The Suite Life of Zack & Cody, its spin-off The Suite Life on Deck, and 2011’s The Suite Life Movie.

Twin sisters Tia and Tamera Mowry have shared the screen with their little brother, Tahj, several times – most notably as guest stars on each other’s respective sitcoms, Sister, Sister and Smart Guy, and in the 2000 Showtime original movie, Seventeen Again.

After years finding success in the business in separate projects, James Franco and his younger brother, Dave, played Tommy Wiseau and Greg Sestero of the infamous cult favorite, The Room, in the 2017 biopic, The Disaster Artist.

Haylie Duff would appear on three episodes of her younger sister, Hilary’s, Disney Channel show, Lizzie McGuire, and provided the singing voice of Isabella Parigi in the theatrical spin-off before they both played a singing group on an episode of American Dreams, sisters in the 2006 rags-to-riches story Material Girls, and both leant their voices to the infamous animated movie Foodfight!, which was released in 2012.

See also  IN School Bus Driver Gets Unexpected 'Thank You'

Singer-songwriter duo Aly and AJ Michalka first shared the screen in the 2006 Disney Channel original movie Cow Belles as sisters, again in the MTV original Super Sweet 16: The Movie the next year as rivals, followed by three episodes of Aly’s CW series Hellcats in 2011 as half-sisters. Most recently, they appeared in the 2015 drama, Weepah Way For Now, as what appear to be fictionalized versions of themselves.

Dakota And Elle Fanning (I Am Sam, Taken)

Elle Fanning has portrayed a younger version of her older sister, Dakota, on two separate occasions: first in the 2001 drama I Am Sam and secondly in the Steven Spielberg-produced, Syfy original miniseries, Taken, in 2002.

Academy Award nominee Abigail and her older brother, Spencer, played siblings in both Raising Helen and The Princess Diaries 2: A Royal Engagement in 2004, played elves in The Santa Clause 3: The Escape Clause in 2006, and later played cousins in the 2014 crime drama, Perfect Sisters.

Justine Bateman played her real-life brother, Jason’s, sibling in the 1986 TV movie Can You Feel Me Dancing? and a sex worker whom Jason’s Michael Bluth mistakes for his long-lost sibling on Arrested Development.

While beloved star John Cusack and his Academy-nominated sister, Joan, have appeared in more films together than most celebrity siblings can claim (including Say Anything… and High Fidelity), the only screen credit that they also share with both their sister, Ann, and brother, Bill, is 1997’s Grosse Pointe Blank, which John also co-wrote and produced.

Bill Murray and his older brother, Brian, are both Saturday Night Live veterans (although at different times) and have several classic movies in common – including Caddyshack, Scrooged, Ghostbusters II, Groundhog Day, and The Razor’s Edge.

Years before casting him in his amazing directorial debut, Gone Baby Gone, Ben Affleck shared the screen with his younger brother and fellow Oscar winner, Casey, in Good Will Hunting (which Ben co-wrote with Matt Damon) and Kevin Smith’s Chasing Amy in 1997.

Kieran Culkin (now more famous than ever since starring on HBO’s Succession) made his acting debut alongside his older brother (child megastar Macaulay Culkin) in 1990’s Home Alone cast as his cousin, Fuller – a role he would also reprise in the 1992 sequel.

In addition to playing Macaulay’s younger self in Richie Rich, the youngest Culkin brother, Rory, also played a younger version of Kieran as the title role in 2002’s Igby Goes Down.

Where do we start with the Wayans Siblings? Well, for instance, several of them (such as Damon and Kim Wayans) were a part of the In Living Color cast with star and creator Keenen Ivory Wayans, who later directed his younger brothers, Marlon and Shawn, in movies like White Chicks, the first two Scary Movie installments, and Little Man.

See also  Yellow City Comic Con Is Back, And I Hope You Like Hocus Pocus.

After playing siblings in the family-friendly horror film, Little Monsters, in 1989, Ben Savage made a guest appearance on his older brother, Fred’s, hit dramedy, The Wonder Years, in 1990 and later returned the favor by inviting him to the Boy Meets World cast for an episode in 1998.

After making several movies together – including Young Guns, Men At Work, and Rated X (the latter two of which Emilio Estevez directed), Charlie Sheen (née Carlos Estevez) reunited with his brother on an episode of his hit sitcom, Two and a Half Men, in 2008.

Both of these talented ladies had guest appearances on Dexter at different times in the series’ run, but Vanessa Marano and her younger sister, Laura, did appear together in the 2019 mystery, Saving Zoë, as siblings torn apart by one’s unsolved murder.

Hereditary’s Alex Wolff and his older brother, Peacock’s Joe vs. Carole cast member Nat Wolff, both debuted as fictionalized versions of themselves in Nickelodeon’s faux rockumentary, The Naked Brothers Band, its series continuation, and the 2009 TV movie Mr. Troop Mom before reuniting in 2018’s Stella’s Last Weekend, which was written and directed by their mother, Polly Draper.

Vera And Taissa Farmiga (Higher Ground, At Middleton, The Nun)

Scream Queens Vera and Taissa Farmiga, who are often mistaken for mother and daughter, played mother and daughter in 2013’s At Middleton after Taissa previously played her older sister’s younger self in Vera’s 2011 directorial debut, Higher Ground. However, interestingly, their characters in the 2018 Conjuring spin-off, The Nun, have no apparent familial ties.

Maude And Iris Apatow (Knocked Up, This Is 40, Funny People)

Euphoria’s Maude Apatow and her younger sister, Iris, have played siblings in 2007’s Knocked Up, its “sort-of sequel” This is 40 from 2012, and 2009’s Funny People – all three of which also starred their real mother, Leslie Mann, as their mother, and were written and directed by their father, Judd Apatow.

Mary-Kate, Ashley, And Elizabeth Olsen (How The West Was Fun)

After Full House made the Olsen Twins, Mary-Kate and Ashley, household names and  before the Marvel movies made their younger sister, Elizabeth, an A-lister, all three of them appeared together in the ABC original TV movie How the West Was Fun in 1994.

Years before his terrifying performance as Pennywise in It, Bill Skarsgård made his acting debut alongside his older brother, True Blood cast member Alexander, in the 2000 Swedish thriller, White Water Fury.

Despite plenty of years of experience between the them, it was not until 2017 when Star Wars star Domnhall Gleeson and his younger brother, Brian, shared the screen in Mother! before reuniting as co-creators and co-stars of the Amazon Prime original comedy Frank of Ireland – also starring their father, Brendan Gleeson.

Comedy icon Eddie Murphy worked behind the scenes a lot with his older brother, Charlie, who passed away in 2017, but the two would also share a few acting credits, – namely Eddie’s 1989 directorial debut Harlem Nights (also Charlie’s first movie), and in 2006’s Norbit, in which Charlie voiced a dog named Floyd.

Phylicia Rashad and her younger sister, Emmy-winning dance legend Debbie Allen, have made guest appearances on each other’s shows – The Cosby Show, on which Rashad played Claire Huxtable, and Grey’s Anatomy, on which Allen plays Dr. Catherine Fox (née Avery) – and both starred in a 2001 TV movie called The Old Settler, which Allen also directed.

You can find Clint Howard in just about every movie directed by his brother, Ron Howard – including his feature-length directorial debut from 1977, Grand Theft Auto, which was also the brothers’ third time acting alongside each other after the 1963 film The Courtship of Eddie’s Father and a handful of episodes of The Andy Griffith Show.

Audiences probably remember Angelina Jolie’s brother, James Haven, better for other reasons than all the times he shared the screen with his younger sister – namely Gia and Hell’s Kitchen from 1998, and 2001’s Original Sin.

In addition to being bandmates with his young brother, Oscar winner Jared Leto, in 30 Seconds to Mars, Shannon Leto also shared the screen with him on a couple of episodes of My So-Called Life (on which Jared played the iconic Jordan Catalano) and through brief appearances in the movies Prefontaine from 1997, 1998’s Highway, and Sol Goode in 2003.

Chris And Scott Evans (Before We Go, Playing It Cool)

Former Captain America actor Chris Evans has a brother named Scott who has also appeared in two romantic-comedies from 2014 with his older sibling, called Before We Go (which Chris also directed) and Playing It Cool.

Comedian and actress Sarah Silverman and her sister, Laura, played heavily fictionalized versions of themselves as series regulars on The Sarah Silverman Program, made guest appearances on Showtime’s Masters of Sex together, and have recurred on Bob’s Burgers as Jimmy Pesto’s twin sons, Andy and Ollie.

Back when they were the biggest thing to come out of Disney Channel, Kevin, Nick, and Joe Jonas played three brothers in a band not named the Jonas Brothers in the Camp Rock movies, and later played themselves to more comedic effect in their own sitcom, aptly titled Jonas.

Looks like talent really does run in the family.