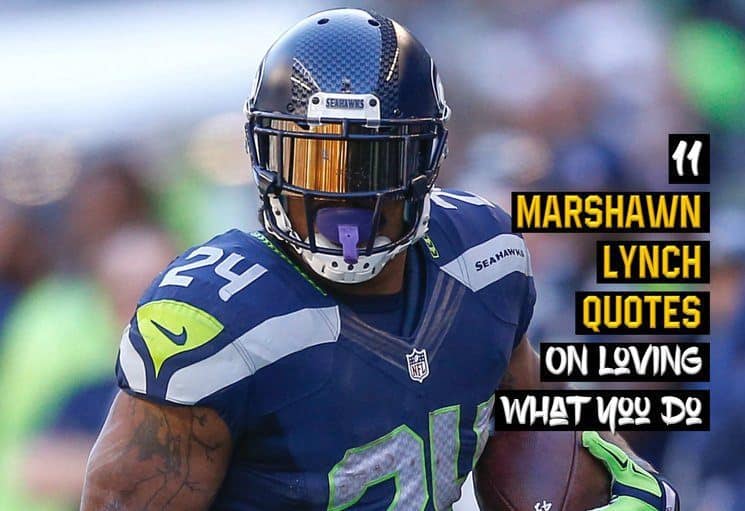 Marshawn Lynch was one of the most unstoppable running backs in the NFL, officially retiring this year in 2016.

Lynch played for the Buffalo Bills and the Seattle Seahawks, and you probably know him mainly from his nickname, “Beast Mode”.

With that said, you’re probably now interested in the best Marshawn Lynch quotes, that are about loving what you do. Take a look!

1. “I’m blessed. I’m blessed every day I wake up. So I just try to maximize every day to the fullest.” – Marshawn Lynch

2. “It doesn’t matter what you all think, what you say about me, because when I go home at night, the same people that I look in the face, my family that I love, that’s all that really matters to me.” – Marshawn Lynch

4. “It came about one of my coaches always called me a beast, from Pop Warner. And it kinda stuck with me. So when I got up to the league, that was my mindstate. That I was going to be a beast. I took it and ran with it.” – Marshawn Lynch

5. “Beast Mode, it’s part of the lifestyle. It’s pretty much self-explanatory. It gets thrown around loosely, I mean, all over. It’s not set to one specific thing like we’re football players or basketball players. Just if you are in your everyday life and you feel like you just accomplished something big that you had going on, then that’s Beast Mode. It’s an accomplishment, that you put yourself through something to get something better out of it. I feel that that’s Beast Mode.” – Marshawn Lynch

6. “When a defender comes up to tackle me, I want him to feel that ground. I would describe the point of impact as a wonderful feeling. It’s what I thrive on: contact.” – Marshawn Lynch

7. “I’ve never seen anybody win the game in the media. But at the same time, I understand what it could do for you, if you wanted to be someone who talks a lot. But that’s not me…” – Marshawn Lynch

8. “You never want to be the one who everyone is going to bust jokes on. The only way to prevent that is to be good at something.” – Marshawn Lynch

9. “I’ve been pretty good at reading people. If you rockin’ with me cause you’re just a solid individual, then we’re rockin’. But if you got a motive or something, I am going to probably see right through that.” – Marshawn Lynch

10. “As a running back, it takes five offensive linemen, a tight end, a fullback and possibly two wide receivers, in order to make my job successful.” – Marshawn Lynch

12. “When I go speak to these kids through my foundation and am able to sit down and tell them some of the things that I’ve been through, they can look up and relate to me, and they can understand the feelings I had that are similar to what they’re going through and feeling.” – Marshawn Lynch

See also  Vikings 53-man roster projection: Who’s in and who’s out after the final preseason game?

13. “Growing up in Oakland, we did things like white t-shirt, blue jeans and Nikes. That was my get down, how I was going to rock. And if you look at me right now, I’m pretty much black tee, blue jeans and some sneakers.” – Marshawn Lynch

14. “The Seahawks, their front office gets in the media; they talk a lot.” – Marshawn Lynch

15. “There are only so many times I can say, ‘I owe it to my offensive linemen,’ or, ‘The credit should go to my teammates,’ before it becomes run down.” – Marshawn Lynch

16. “You never want to be the one who everyone is going to bust jokes on. The only way to prevent that is to be good at something.” – Marshawn Lynch

20. “”Michael Phelps wouldn’t have been on the Wheaties box if I stuck with swimming. I’ve been swimming since I was a little kid. I still swim. I’m the best.” – Marshawn Lynch

21. “I ain’t never seen no talking winning nothing. Been like that since I was little. I was raised like that.” – Marshawn Lynch

Thanks for checking out these awesome quotes by Marshawn Lynch guys! If there’s any other NFL players that you want us to publish quotes on, let us know!

What’s your favorite Marshawn Lynch quote? Leave a comment below.

Ruben Randall - August 9, 2022 0
Money
Miley Cyrus is only 29 years old now, and while some may find that hard to believe since she has been around forever, it...