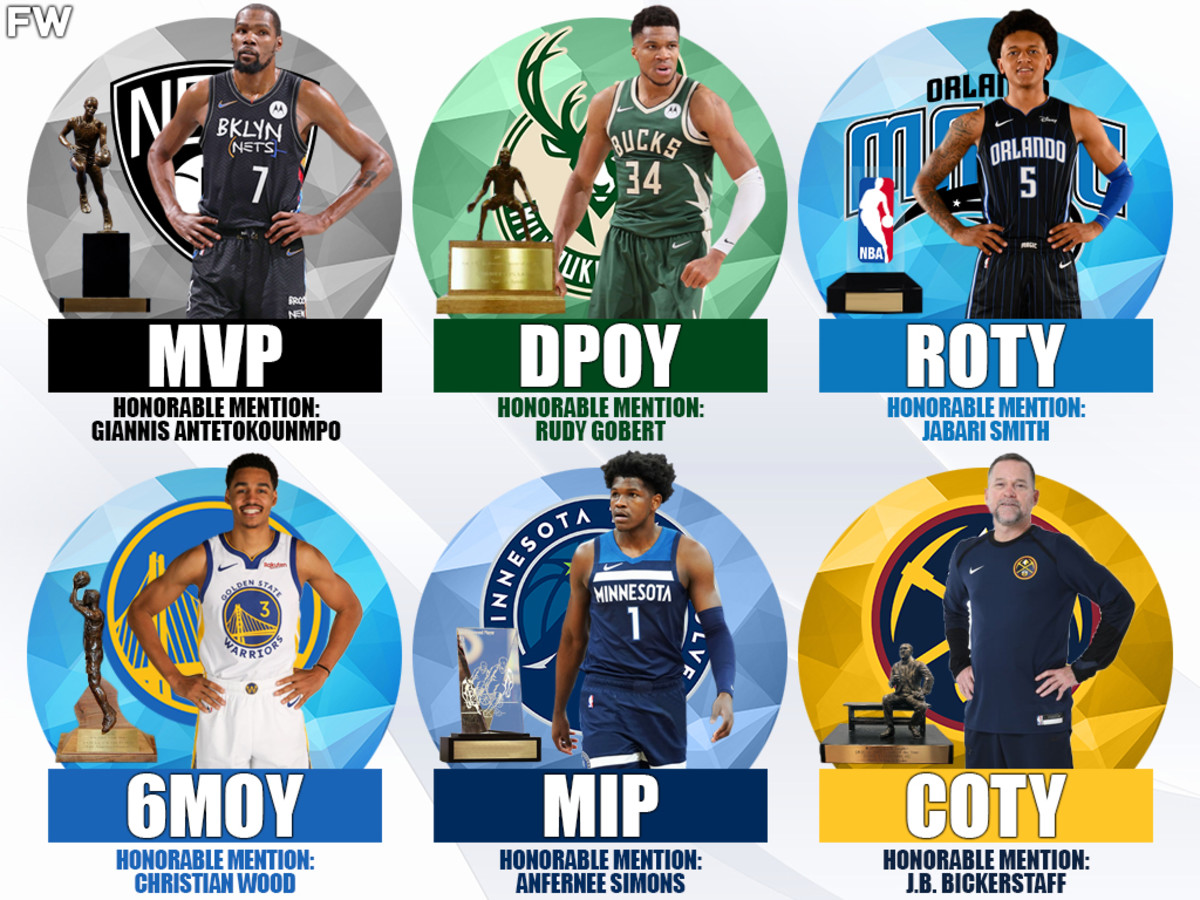 There have already been some significant developments in free agency ahead of the 2022–23 NBA season, including key players moving teams while contending teams have not gotten better. Such examples include the Los Angeles Clippers signing John Wall, the Lakers holding fort with Russell Westbrook, Brooklyn proceeding with Kevin Durant and Kyrie Irving, and the Timberwolves bringing in Rudy Gobert. Meanwhile, the Boston Celtics and Phoenix Suns are dealing with off-court issues that could be very damaging. Obviously, there has been a ton of drama this offseason.

It is reasonable to say that all NBA fans cannot wait for the start of the new season, especially with the Los Angeles Clippers superteam returning and the Golden State Warriors aiming to repeat as NBA champions. But who will be the season’s top performers in terms of individual performances in terms of impact and statistics? It is time to predict the award winners for the 2022-23 NBA season whereby we gain an indication of what to expect from the league’s best players and coaches.

Coach of the Year: Michael Malone

Jamal Murray and hopefully Michael Porter Jr will be back on the court for the Denver Nuggets, and that means the team will be one of the favorites to win it all in the Western Conference. Nikola Jokic is an absolute superstar, and he should be back to his place when it comes to leading a contending team in the Western Conference after winning his second straight MVP award. With the addition of two-way wing Kentavious Caldwell-Pope to the roster and the returning stars, Denver will be a massive problem in 2023. And guess who will be coaching the two-time league MVP and Jamal Murray? Michael Malone.

Malone could be the favorite to win Coach of the Year. Malone has proven to be an excellent tactician and motivator who always seems to find a way to motivate the role players to play hard and accept backseat roles. If the Nuggets finish with at least a top-three seed in the West and the stars play well together, Malone will be rewarded for his coaching efforts with the coveted Coach of the Year award.

Otherwise, expect J.B. Bickerstaff to continue to lead the Cleveland Cavaliers to top seedings in the Eastern Conference after the franchise acquired multiple-time All-Star Donovan Mitchell. Last year, Bickerstaff managed to get the whole team to buy into the defensive end, including budding star Evan Mobley, and also helped All-Star Darius Garland break through in a competitive Western Conference. If Bickerstaff can incorporate Donovan Mitchell well and also continue teaching Garland the ropes of being an All-Star point guard, he could be a legitimate contender for the Coach of the Year award.

Very few players have the ceiling that Anthony Edwards has right now. The budding All-Star guard has blossomed into a consistent scorer due to his elite athleticism. Edwards is returning to the Minnesota Timberwolves next year after a successful 2022 campaign, and alongside another All-Star in Rudy Gobert, he will be required to take a bigger role on the court. This could be the perfect opportunity for the budding star to actually make the All-Star Team and win the Most Improved Player of the Year award.

Last year, Edwards averaged 21.3 PPG, 4.8 RPG, and 3.8 APG while shooting 44.1% from the field and 35.7% from three. Next year, expect Edwards to work hard to return back to close to All-Star form and get his numbers up. Except for this time, Anthony might actually make the All-Star Team because the Minnesota Timberwolves will be a factor with a dominant frontcourt of Karl-Anthony Towns and Rudy Gobert teaming up.

Not to mention that Anfernee Simons, who had a career season in 2022, will play again the following year. The gifted guard was given a sizable contract to serve as Damian Lillard’s sidekick on the offensive guard. Simons averaged 17.3 points per game last season, and as a three-point shooter and ball-handler, he could increase that to at least 20 points per game. The 23-year-return old’s to his superb form from a season ago will excite Portland supporters because there isn’t much for the Trail Blazers to be confident about their roster other than Jerami Grant.

The Golden State Warriors claimed the 2022 NBA title, and the team appears to be moving forward with the intention of bringing the same roster back. Jordan Poole, Klay Thompson, Draymond Green, and Stephen Curry will all return. Poole proved in the NBA Finals that he is a superb offensive player with a wide field of vision while playing off the bench. With additional experience under his belt, Poole will probably have an even bigger part the next year.

Poole averaged 18.5 PPG last season, mostly off the bench, and he might have numbers close to those with the Warriors if he is able to contribute more on the court. One of the players that could be considered for his first All-Star Team is the shooting guard, but he could actually win the 6th Man of the Year award. The youngster is looking to convince the Warriors (or any other team) that he deserves a max contract, and he could look to acquire the goods by making an All-Star Team and winning the 6th Man of the Year award.

Christian Wood, a player who must replicate his performances from last year, will also be in the mix for the Sixth Man of the Year award. The big man averaged 17.9 PPG, 10.1 RPG, and 1.0 BPG last year but could take his numbers up across the board as he gains more exposure with the Dallas Mavericks. The offensively inclined big man is only 27 years old, so he can absolutely be a valuable member of the court alongside Luka Doncic whenever he comes off the bench. Wood will be lethal backing up the Mavericks’ frontcourt players because he is good enough to start and will make a killing playing against other bench players. A big man who can rebound, score inside, and even shoot, Wood will be a perfect lob partner to superstar Luka Doncic when he checks into the game.

Rookie of the Year: Paolo Banchero

The Rookie of the Year award race could be an exciting one to follow throughout the year. Obviously, only two players stand out for the award: Paolo Banchero, and Jabari Smith. Unfortunately, we will not get to see Chet Holmgren compete in the NBA in 2023 after hurting his leg and getting shut down for the year. The decision to shut Holmgren out was an easy one for the Oklahoma City Thunder, as they can continue tanking for picks and also resting their No. 1 overall pick.

Because he plays on arguably the worst team in the NBA and the fact he is the only real offensive weapon on his team, Paolo Banchero will likely win the Rookie of the Year award after going No. 1 overall in the NBA Draft. Banchero is 6’10” with elite strength and athleticism, meaning he will have no problem carrying the offense for the Orlando Magic. Orlando does not have much to celebrate at all right now, and Banchero could take advantage by having his way on the basketball court. Of course, the returning Jonathan Isaac could help Paolo settle in nicely.

As for the runner-up, Jabari Smith will challenge Banchero for the award because he is such a smooth operator on the floor on the offensive end. But he does not have the “grown man” body that Banchero possesses, meaning he will need a year or two to make a significant impact on the floor. But no doubt, Smith can play basketball because the Houston Rockets were ecstatic for the opportunity to take him No. 3 overall to pair with Jalen Green. But Green’s presence will slightly hurt Smith’s numbers and that will take him to the second-best rookie in 2023 behind the physical specimen that is Banchero.

Giannis Antetokounmpo is one of the top defensive players in the NBA thanks to his exceptional quickness and talent. The Greek Freak can defend four or even five positions at once, but he excels at guarding other forwards on the court. Giannis can use his power and size to his advantage when playing against weaker players despite being 6’11” and 242 lbs. Even while playing against larger opponents, Giannis possesses the speed to cover swiftly and effectively.

Regardless of what some people may believe about the Bucks’ title chances in 2023, Giannis is a very talented player on both sides of the court, especially on defense, and Milwaukee is a major threat. If Giannis can get close to his 2022 averages of 1.1 SPG and 1.4 BPG, he will be in the mix for the Defensive Player of the Year award and could be the absolute favorite.

Three-time Defensive Player of the Year Rudy Gobert may be a candidate for a fourth honor in terms of defensive accolades. The 7’1″ Frenchman has incredibly long arms and is a top defensive player, and will be hungry to prove his worth as a member of the Minnesota Timberwolves. No doubt, Gobert has been hearing the criticisms, and getting traded by the Utah Jazz could be a motivating factor for his performances in 2023. Rudy winning his fourth Defensive Player of the Year award would be a truly remarkable accomplishment because just two players have won four honors, Dikembe Mutombo and Ben Wallace.

Last season, Kevin Durant shot 51.8% from the field, 38.3% from three, and 91.0% from the line for averages of 29.9 PPG, 7.4 RPG, and 6.4 APG. At the beginning of the year, Durant was on track to contend for the MVP award, but Brooklyn’s catastrophic season was brought on by Kyrie Irving’s refusal to receive the covid vaccination and James Harden’s drama. Expect Kevin Durant to come back the following season with a vengeance and maintain his offensive efficiency. The forward will easily post MVP statistics while still in his prime, whether he plays for the Nets or elsewhere.

Quite frankly, an MVP Award for Kevin Durant is overdue. If the superstar forward can overcome a ton of drama with the Brooklyn Nets and lead the team to contending status, he should absolutely be in the mix for the coveted individual award. Durant is one of the top-two players in the NBA right now and is the single greatest scoring talent in the league. Standing close to 7 feet tall and armed with an unstoppable jumper, KD can get buckets anytime he truly wants. Again, team success will be the determining factor in Kevin’s MVP chances but he is the favorite.

Possibly the favorite for the Defensive Player of the Year, Giannis Antetokounmpo of the Milwaukee Bucks will also be in the mix for the MVP award. The Greek Freak is one of the best two-way players in the NBA because he can guard all five positions as required and can also score anytime at the rim. The Bucks will bounce back after last year’s disappointing exit in the playoffs because Khris Middleton will be back healthy and the rest of the roster looks very solid. At age 27, Giannis is in his prime and will absolutely be in the mix for the MVP award as the challenger to Durant for the title of being the best player in the world.

Stephen Curry’s Perfect Record Against NBA Rivals: 331 NBA Players Have Never Won A Game Against The Best Shooter In The World

10 Players Who Played The Most Minutes In NBA Playoffs History

NFL Free Agents Who Can Bail out Teams That Can’t Strike...