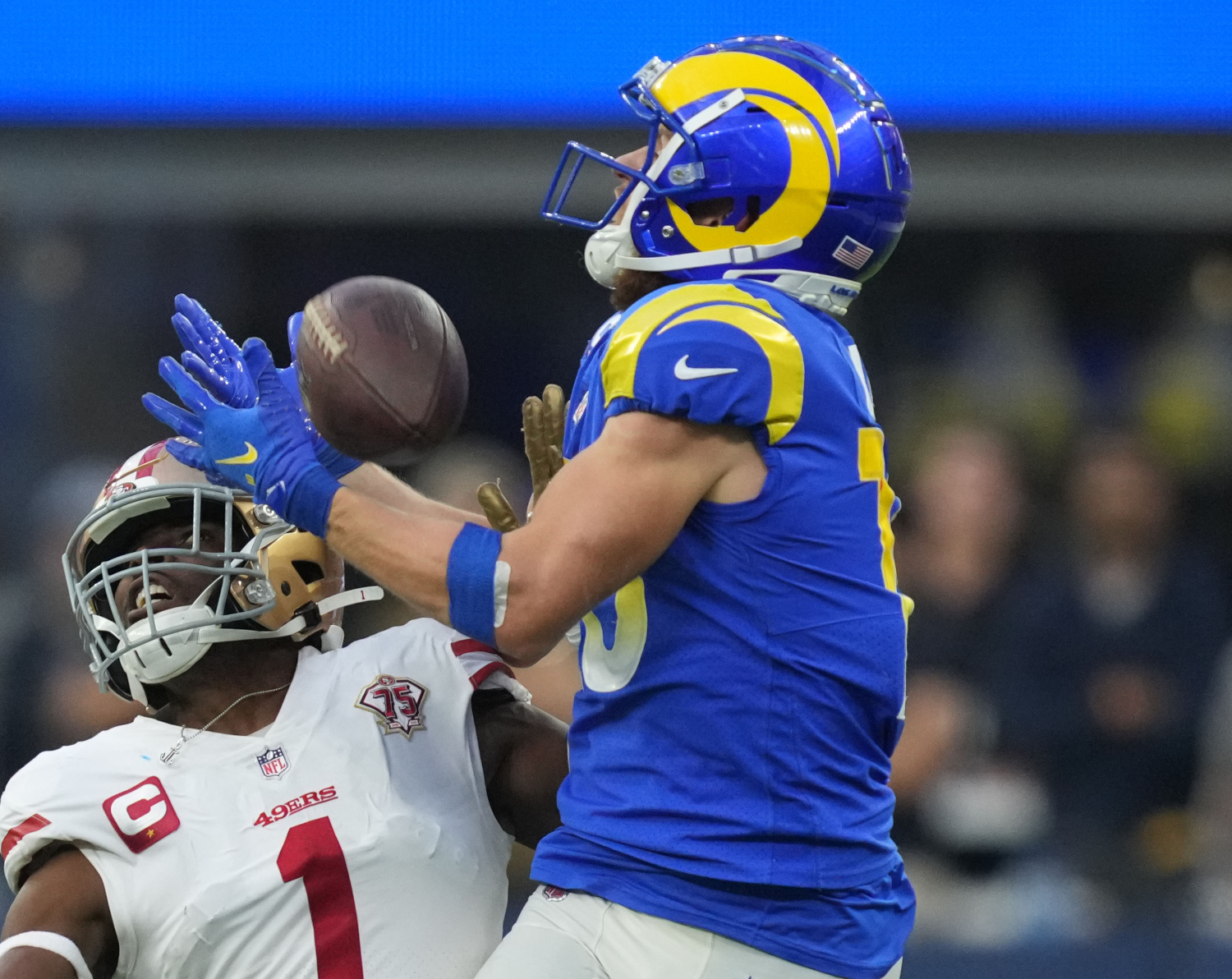 NFL Offseason – Our annual look at the advanced stats in the passing game continues with what has become a very NFC West-focused series this year. Last week, we talked about YAC+ and the dominance of the San Francisco 49ers. We also covered passing plus/minus, where Kyler Murray reigned supreme. But the 49ers and Cardinals didn’t win the Super Bowl last year; that was the domain of the Los Angeles Rams. And it was the Rams who had the receiver who shattered all of our DYAR records, as Cooper Kupp’s triple crown was just as good in advanced stats as it was in traditional ones. Today, we get to celebrate Kupp’s exceptional season once more as we switch to receiving plus/minus, just one more stat where Kupp stood head-and-shoulders above his competition.

Receiving plus/minus is a stat we annually track to help provide context to catch rate. Given the location of a receiver’s targets, it compares his catch rate in each area to historical baselines. This stat does not consider passes listed as “Thrown Away,” “Tipped at Line,” “Miscommunication,” or “Quarterback Hit in Motion” by Sports Info Solutions charting. The odds of a pass being completed are based on the pass distance, the distance required for a first down, and whether the ball was thrown to the left, middle, or right side of the field. This is a counting stat, so more targets are obviously a great thing for the purposes of what we’re talking about here.

Receiver stats are often tied very closely with quarterback stats, as it takes two to tango. A completion is the responsibility of both the receiver and the quarterback, and it’s unusual for a passer to be highly accurate to just one target. Since our numbers begin in 2006, the leading wideout in receiving plus/minus had a quarterback who, on average, ranked third in passing plus/minus, accurate to everyone at every depth. The only time we had a quarterback rank outside of the top 10 was in 2012, when Andre Johnson was clearly the superior half of his connection with Matt Schaub.

And Schaub, at least, finished with a +8.6 plus/minus. Kupp was working with Matthew Stafford, who finished 20th in passing plus/minus at +3.0—or, to put it another way, at -14.3 to everyone not named Cooper Kupp. There’s an argument to be made that Kupp’s numbers are even more impressive than they appear at first blush. In addition to celebrating Kupp’s numbers, we’ll also look at just what the heck was up with the rest of the Rams’ passing attack. Let’s dive in.

A total of 91 wide receivers qualified last season, but we’ll just show the 15 from the top and bottom of the rankings to save space here. Each receiver’s plus/minus can be found in Football Outsiders Almanac 2022.

Kupp’s +17.3 is impressive in and of itself. While it wouldn’t have topped the list in any of the past four years, it is the seventh-highest plus/minus we have seen since 2006—we have been in a run of very good seasons since the tail end of the Michael Thomas/Drew Brees era. The only players to have a higher mark than Kupp since 2006 are Thomas, Antonio Brown, Reggie Wayne, and Stefon Diggs.

It is worth noting that plus/minus is a counting stat, and Kupp did a lot of counting in 2021. Kupp had 191 targets (including pass interference), 22 more than anyone else last season and in the top 15 all-time. I think it’s more accurate to say that Kupp was very good over tremendous volume last season as opposed to being tremendous on a play-for-play basis. That’s extraordinarily valuable, and why Kupp broke so many Football Outsiders records, but it means that his numbers aren’t quite as impressive when you break it down as a rate rather than as a total. A +17.3 plus/minus on 186 qualifying targets comes out as a catch rate over expectation of 9.3%—once again, very good, but not generally league-leading. In fact, the only player with a lower CROE to lead the league in plus/minus was Andre Johnson in 2008 at 8.3%. Kupp’s 9.3% was seventh among qualified receivers, but he had at least 60 more targets than anyone up above him. Very good in tremendous volume equals league-leading numbers.

Kupp’s also interesting because he’s not the prototypical guy you would expect to lead the league in plus/minus. Since he entered the league in 2017, he’s seventh in plus/minus at +35.4. With the exception of Michael Thomas, however, everyone ahead of Kupp is more of a deep-ball threat—Tyler Lockett, Stefon Diggs, Adam Thielen, Davante Adams, and DeAndre Hopkins. Kupp is racking up his numbers by catching basically all of his diet of high-probability targets, nickel and diming his way to the top of the league. Since 2017, he is the plus/minus leader for all players with an average depth of target under 8.0 yards, more than doubling any other eligible player apart from Hunter Renfrow’s +19.7, most of which came from 2021 alone. I’ll be very interested to see if Kupp can come close to these numbers again next season; while he has improved in plus/minus every year he has been in the league, going from +6.4 to +17.3 in one season does somewhat shout outlier.

But, of course, Kupp’s improvement didn’t come in a vacuum—it came with Matthew Stafford replacing Jared Goff at quarterback, which is sure to improve things. After all, Goff’s career CPOE is a paltry 0.2%, which can’t hold a candle to Stafford’s … uh, -0.8%. Huh. That’s worse. Well, Goff was working with better receivers in Los Angeles than most of Stafford’s crew in Detroit, so we should instead look at Stafford’s connection with players more in Kupp’s caliber—after all, with Hall of Famer Calvin Johnson, Stafford had a career plus/minus of … uh, +14.2, or less than what he did with Kupp last season. And a CPOE of just 1.7%. In fact, Stafford’s 9.3% CPOE to Kupp dwarfs any other connection he has ever had, with the next-closest player with at least 100 targets being Golden Tate at 3.0%.

In fact, let’s go ahead and print the complete table of Rams receivers last season and their plus/minus numbers so you can see how much Kupp stood out over his teammates.

It is very, very strange for a league leader to overperform his teammates by this much. The average plus/minus for a second banana since 2006 was +7.5, with the previous low-water point being Jimmy Graham’s +3.7 in 2016 behind Doug Baldwin. Accuracy is not Stafford’s primary skill as a passer at any depth, making Kupp’s league-leading totals all the more impressive.

Christian Kirk was the most impressive on a play-for-play basis, as +13.4 is the third-highest plus/minus we have ever seen for a player with fewer than 100 targets. You can question whether or not he’s worth the $18 million a year Jacksonville is paying him, but he’s just a slight improvement over the hands of, say, a Laviska Shenault. Kirk is one of several of last year’s top finishers on the move, joining Tyreek Hill and Davante Adams. As receiving plus/minus is at least somewhat dependent on quarterback accuracy, it will be interesting to see how their numbers change in 2022.

Adams probably has the best chance of holding on to a top spot, considering Derek Carr helped Hunter Renfrow to a second-place finish in 2021. Adams joins Tyler Lockett, Justin Jefferson, Chris Godwin, and DeAndre Hopkins as players returning to the top 15 from 2020. Lockett and Hopkins have both been near the top of the leaderboard since 2018, but their streaks are in jeopardy due to Hopkins’ suspension and Lockett’s quarterback situation.

We also need to focus on the bottom of the leaderboards for just a moment, with Carolina finishing one-two at the bottom in the form of DJ Moore and Robby Anderson. Having Sam Darnold as your primary quarterback will do that for you, but even taking that into account, Anderson couldn’t catch a cold in 2021. A -17.0 plus/minus is historically terrible—fourth worst since our data began.

That’s not normal for Anderson, who was up at +3.8 in 2020. He struggled with drops all season long and just seemed to lack any sort of connection with any Panthers quarterback—he was technically worst with Darnold, but he had a -6.1 plus/minus on just 42 targets from P.J. Walker and Cam Newton too, so it’s not all on one quarterback. It was more normal for Moore, who joins Darius Slayton and Jalen Reagor as returnees from 2020’s bottom 15. Either way, Carolina’s receiver corps was a disaster last year, and we’ll continue to see more of that as we move to tight ends.

A total of 55 tight ends qualified last season, but we’re only listing the top and bottom 10 for space reasons.

Tight ends and running backs are less consistent from year-to-year than wide receivers as a general rule of thumb. Durham Smythe is the only returnee from 2020’s top 10 tight ends, while Noah Fant and Hayden Hurst both rose from the bottom 10 in 2020 to the top in 2021—Fant got a quarterback upgrade, while Hurst saw his usage shift dramatically with Kyle Pitts in town.

See also  A peek inside this $32.5 million mansion in Southern California

Tight ends do help explain one of the more surprising results from the quarterback plus/minus rankings: Lamar Jackson’s finish ahead of Justin Herbert. Jackson had Mark Andrews as a safety net, and Andrews set all sorts of franchise records during his career year. Herbert, on the other hand, had to deal with Jared Cook, seventh-worst among tight ends last season. The difference in tight end connection explains away all of the difference between Jackson and Herbert’s totals, and it’s worth noting that the Chargers have dumped Cook and added Gerald Everett, eighth best last season. A tight end that can catch should help Herbert immensely in 2022.

In terms of rates, the best tight end was actually rookie John Bates in Washington, who caught 20 of his 23 eligible targets. That’s a small sample size, but considering his teammate Ricky Seals-Jones was dead last with a -5.6 plus/minus, there’s something to be commended there. Bates may well be the Week 1 starter for the Commanders as Logan Thomas continues to heal from his December knee injury. At the other end of the spectrum, Carolina’s Ian Thomas had the worst year on a per-play basis—he had an expected catch rate of 75.5%, and only brought in 62.1% of his targets. Not a great year for the Carolina passing attack.

There were 57 qualified running backs, but we are just going to list 10 from the top and bottom here.

Hey, a Panther what done good! While Carolina hopes that Christian McCaffrey will be healthy enough to earn more than 40 targets in 2022, it’s nice to see him back on top of these rankings where he belongs. Despite missing most of the last two seasons, McCaffrey still leads all running backs in plus/minus since he entered the league with +18.8. A healthy McCaffrey is the league’s best receiving option out of the backfield, and goodness knows the Panthers need that.

The Jets could use literally anyone who could hold on to a football out of the backfield, with Ty Johnson and Michael Carter both finishing in the bottom 10. Drops were the major culprit, especially for Johnson, which doesn’t help a developing young quarterback like Zach Wilson! Enter Breece Hall, who was a substantial contributor in the receiving game at Iowa State, and will hopefully keep the Jets off the bottom of this list in 2022.

Famous WAGs who out-earn their sport star husbands – from legendary...