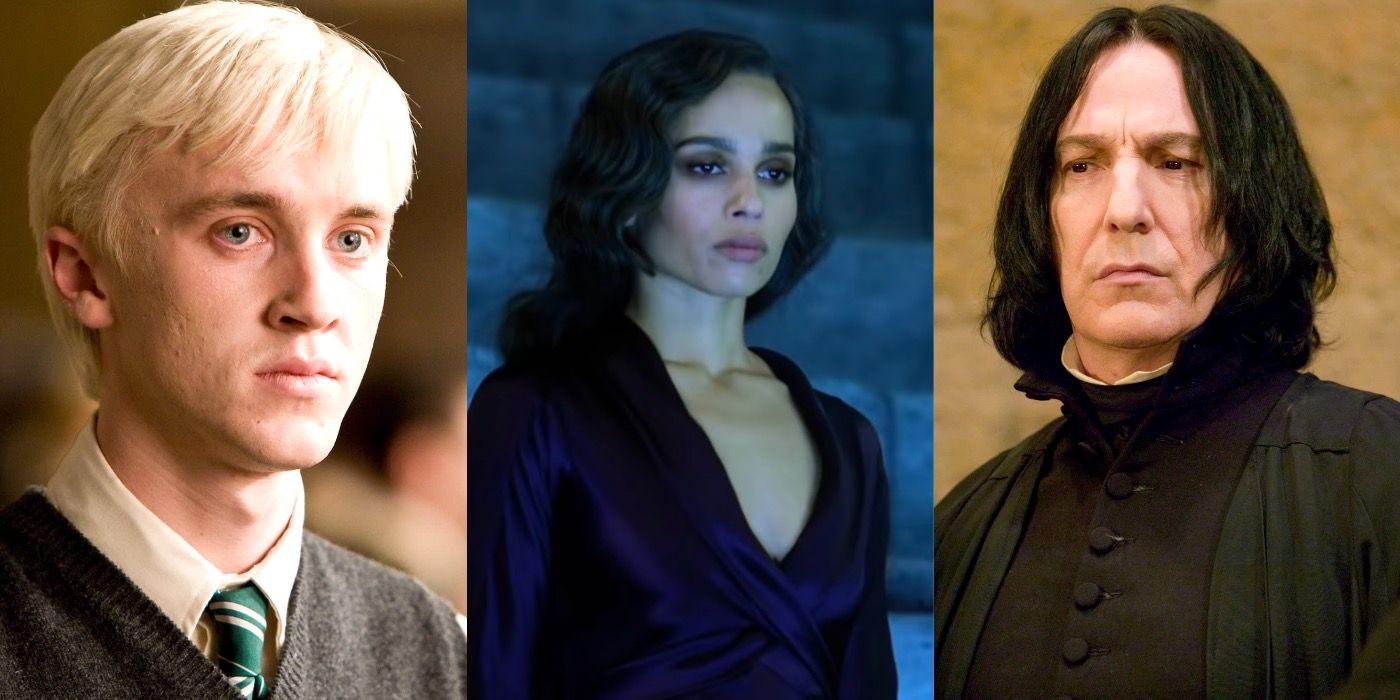 Within Hogwarts School of Witchcraft and Wizardry, the magical school setting of Harry Potter, each of the school’s houses has certain stereotypes that people assume apply to every student who resides there. This is particularly true for Slytherin, which has an unfair reputation for being the “evil” house in Hogwarts.

The traits that make Slytherins so suitable for their house (cunning and ambition) do tend to lean more “evil” than the other houses, so it’s easy to see how this could be spun into a negative more than a positive. However Slytherin, like every other house, has students and former students of all moralities. Plenty of Slytherins have done good things for the Wizarding World, but unfortunately, they don’t often get recognized for it.

As Harry Potter’s son and the only of Harry’s children to be sorted into Slytherin, it doesn’t come as much of a surprise that Albus did quite a bit of good for the Wizarding World.

One of the protagonists of Harry Potter and The Cursed Child, Albus made a number of mistakes, but he ultimately saved the day with the help of his friends and family. In doing so, Albus prevented Delphi from saving Voldemort in the past, a plot that would have restored the Dark Lord to his full power.

The son of Draco Malfoy and Astoria Greengrass, Scorpius Malfoy had a central role in The Cursed Child, where he is Albus’ best friend. It then makes sense that he became a vital component in the scheme to save the world, and prevent Voldemort from coming back. Not only that, but Scorpius also saved Albus after he inadvertently got wiped out of the timeline by misusing the Time-Turner.

If it weren’t for Scorpius there is a good chance that Albus wouldn’t even exist in their time anymore. Like his father and grandmother before him, Scorpius managed to prove that not all Malfoys are inherently bad.

Even though Lucius Malfoy did countless terrible things in the Harry Potter series, he made one great choice in his dark wizarding career when he defected from the Death Eaters alongside his son and wife, in a moment of courage that shows how Gryffindors and Slytherins are basically the same.

As well as abstaining from fighting in the final Battle of Hogwarts in favor of finding Draco, Lucius also gave valuable information and intel to the Ministry of Magic which led to the arrests of several Death Eaters after Voldemort was gone, ensuring that many of the Dark Lord’s most avid followers were imprisoned.

Vincent Crabbe was one of Draco Malfoy’s infamous cronies alongside Gregory Goyle. His good deed occurred in the final Harry Potter book in the Room of Requirement, although it was accidental. Crabbe set a dangerous Fiendfyre spell and lost total control over it, which resulted in his own death.

However, in the process, Crabbe’s spell also destroyed one of Voldemort’s Horcruxes; the Ravenclaw Diadem. While Harry likely would have found another way to destroy it eventually, this move aided Harry in his arduous and time-sensitive quest.

Very little is known about Abraxas Malfoy, father of Lucius, but he was a respected wizard in his time at Hogwarts, held in high esteem by Horace Slughorn. Even Draco was aware of his grandfather’s popularity, as he tried to impress Slughorn enough to get an invitation to his club (as Abraxas once has) by mentioning him.

Given that Slughorn didn’t want anything to do with Death Eaters or criminals, it is unlikely that Abraxas was an evil wizard, at least not in any way that Slughorn could perceive. However, this didn’t mean that Abraxas’ son wouldn’t be led down a dark path himself.

It took a lot for Draco Malfoy to outgrow his arrogant, prejudiced, and cruel behaviors, but he deserves credit for actually getting there eventually.

Malfoy experienced a lot of trauma when he was coerced into becoming a Death Eater, assigned to kill Albus Dumbledore, and after his experiences, he made a drastic turnaround when it came to his feelings towards Muggles and Muggle-born witches and wizards. This caused some tension between Draco and his parents, but he went out of his way to raise his own son to not look down on the people he had been raised to hate, proving once and for all that he was the least evil Death Eater.

Not much is known about the younger Phineas Black, except for the fact that he distinguished himself from his purity-obsessed family when he stood up in support of Muggle rights, which led to his father disowning him. The father in question, Phineas Nigellus Black, had the dubious distinction of being the least popular headmaster in Hogwarts history.

Phineas Nigellus hoped that all of his children would follow in his footsteps, but his eldest son and namesake rejected his views. In doing so, though, Phineas no doubt made the Wizarding World a bit of a better place.

Though Horace Slughorn was a social climber easily manipulated by Tom Riddle into revealing the secrets of Horcruxes, he eventually came clean about this to Harry Potter in a moment of Slytherin heroism which ultimately helped Harry to defeat Voldemort.

Even though Slughorn was at fault in the first place, Tom Riddle’s powers of persuasion cannot be underestimated, and for a man as vain as Slughorn, it was a big deal that he shared his most shameful moment with Harry to assist in the greater fight.

Although Narcissa Malfoy had a reputation for caring little for anything or anyone outside of her own family, the Slytherin proved everyone wrong when she played a surprisingly crucial role in the defeat of Voldemort.

When Narcissa was given an opportunity to declare Harry Potter alive, allowing Voldemort to defeat him for good, she prioritized the safety of her son Draco above all else, and she lied to Voldemort, a moment of humanity which ultimately resulted in Harry’s victory and Voldemort’s destruction.

Leta Lestrange was a somewhat lonely girl, and she didn’t seem to have many friends during her time at Hogwarts. Even so, she was ultimately a much better and braver person than many other Hogwarts students.

When the only people that Leta seemed to truly care for in her life, Theseus and Newt Scamander, were in mortal danger because of Gellert Grindelwald, Leta chose to provide enough of a distraction for the two of them to escape, and she sacrificed her own life in the process. She certainly knew that her attempt to hoodwink Grindelwald would get her killed, but saving her friends was worth it for her.

The Black family is one of the oldest, most powerful, and purest wizard bloodlines in the entire Wizarding World, and to say that they take great pride in that fact would be an understatement. When a member of the Black family decides to defect in any way, then, the repercussions are fierce, and they are completely disowned, literally burned away from their family tree.

This happened to Andromeda Black when she decided to marry a Muggle-born wizard named Ted Tonks. Nymphadora Tonks’ mother, Andromeda, and her husband Ted were also allied with the Order of the Phoenix, showing just how much distance Andromeda eventually got from her birth family as she followed her own path, certain of her convictions.

While Sirius Black’s younger brother Regulus seemed like he was more than willing to follow into the traditional Black family footsteps, as a wizard enamored with the Dark Arts and a true believer in Voldemort, he ultimately had a change of heart.

See also  Murph Training Plan: PR Your Murph Time for a Good Cause

Though Regulus was a loyal Death Eater in the First Wizarding War, he had doubts when he learned of Voldemort’s Horcrux plan, and with the help of the house-elf Kreacher, he stole one of the Horcruxes, and attempted to destroy it.

With a complex morality that fans still debate about today, Severus Snape is a divisive character, but it’s undeniable that his secret loyalty to Dumbledore and long-held love for Lily Potter led him to do some good.

Severus Snape did a great job embodying the life of a dark wizard, but this was ultimately a years-long deception. He spent ages pretending to be loyal to Voldemort, all the while undermining him and waiting for the right moment to strike. In doing so, he provided the Order of the Phoenix with vital information to assist in their fight against the Dark Lord.

Salazar Slytherin certainly had some troublesome qualities as a wizard, but that doesn’t erase the fact that he was one of the founders of the greatest magical school in the world. Salazar had unjust notions of how the Wizarding World should look, and he was unfairly prejudiced against Muggles and Muggle-born witches and wizards, but even so he shaped Hogwarts into what it would become.

Slytherin house’s negative reputation may be in part because of its founder, but at the same time, Salazar Slytherin created a house that allowed those who prized ambition and cunning to maximize their abilities and get the most that they could out of their education.

It’s interesting that Slytherin has such a negative reputation among students because the wizard that arguably did the most for Muggle-wizard relations was actually a Slytherin himself.

Merlin was a wizard so famous and so open about his magical abilities that he’s famous within both the wizarding and Muggle communities, and a huge reason for that is because he intentionally revealed himself to Muggles in the hopes that the Wizarding and Muggle worlds could eventually become one. His grand ideas and impact on wizards led to the figure becoming immortalized on a Chocolate Frog Card.

NEXT: The 5 Most Admirable Slytherin Traits In Harry Potter (& The 5 Worst)

Will Mission: Impossible 8 Be The Last One?

House of the Dragon: Olivia Cooke Asks Fans Not to Take...

Ruben Randall - October 29, 2022 0
Actress
Recently Cooke told Deadline that she doesn’t see Alicent as the villainous figure that some people are making her out to be saying “I...

Edward Herrmann Once Bashed the Real Town Stars Hollow Is Based...