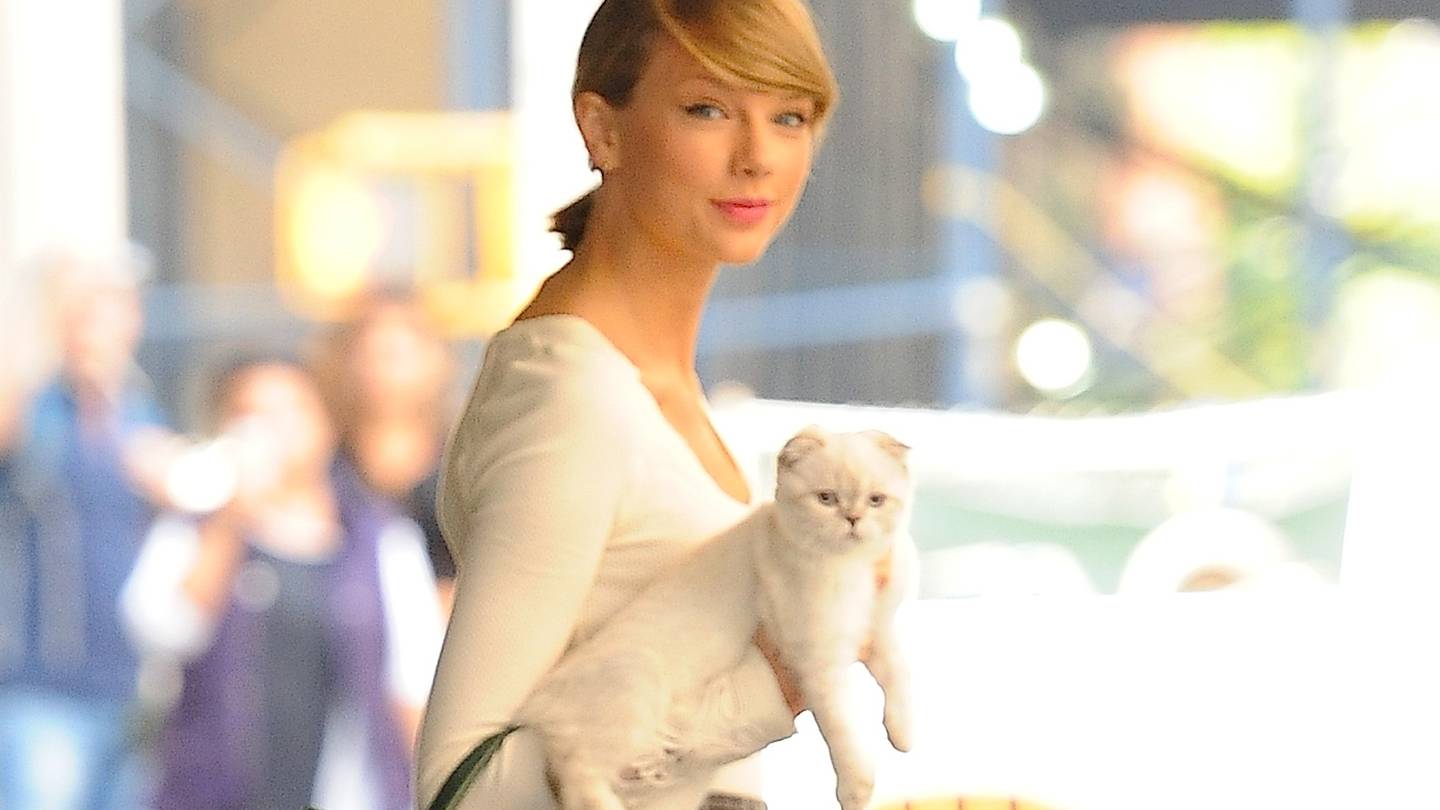 As we mark International Cat Day on August 8, celebrities across the world have been paying homage to their feline family members.

Some of the most famous names in the world have a brood of pets at home, and here’s just a handful of those who have chosen cats as companions.

The British comedian has professed his love for cats in the past and adopted a feline family member during the Covid-19 lockdowns. He even appeared on The Tonight Show Starring Jimmy Fallon with his furry friend, who he called Pickle, last year.

At the start of lockdown, Gervais’s cat Ollie, aged 16, died, so he and his wife Jane decided to foster another. It didn’t take long for the couple to fall in love with their new addition, though. “We got this beautiful cat that we fostered, a rescue cat that we found and it was sort of shy,” the After Life creator said on the show. “But within one day, it got on my lap and looked at me and I went, ‘We’re keeping it!’”

Katy Perry’s cat was almost as famous as she is. Kitty Purry, as she was known, sadly died in April 2020, but Perry had had her feline friend for 15 years. Kitty Purry even made a cameo in the I Kissed a Girl museum video and was widely considered as the singer’s mascot.

“Kitty Purry crawled through my then-boyfriend’s window 15 years ago, fully pregnant and seeking shelter. Two litters and many moons later, this street cat became a loveable mascot to many,” Perry, who also has a dog, wrote on Instagram when the cat died, alongside many throwback photos. “I hope she rests in salmon fillets and tuna tartare way up in catnip heaven. Kitty, thanks for the cuddles and companionship along the way.”

The Love Story singer is a notable cat lover, and has three pets as part of her entourage, each one named after a famous fictional character: Meredith Grey, Olivia Benson and Benjamin Button. Taylor Swift even starred in the 2019 film Cats and referred to her feline companions at the film’s New York premiere as her “little lazy bears”.

It’s even been reported that Olivia, which has had cameos in music videos and ads, is one of the world’s richest pets, with a “net worth” of $97 million on the 2018 Rich Pet List. She even has her own Instagram account.

Russell Brand’s Oxfordshire house is overrun with animals, his wife Laura previously told UK media. This includes two dogs, eight cats and five chickens, according to a 2021 interview, with six kittens among them.

In April 2020, Brand’s feline companion of 16 years, Morrissey, died. When it happened, the comedian took to social media to post a video about how his cat’s death “affected me viscerally”. “I’ve never been more affected by a death in my life,” he said.

The Kardashian-Jenner clan are generally fans of cats and Kim Kardashian is no exception. In December, the lawyer-in-training revealed her latest addition to the family, a cat called Mercy, on her Instagram Stories. The new pet comes a decade after her last pet cat, a Persian kitten also called Mercy, died from a rare form of stomach cancer at only 4 months of age. “My heart is completely broken,” Kardashian said at the time. Khloe Kardashian and Kylie Jenner are also cat people.

The American rapper and his partner Megan Fox revealed their Bengal kitten Whiskey earlier this year. He posted in February about their new family addition, with photos of the pet resting on a cat tree and posing with the couple. He attracted the ire of animal rights group Peta, however, as the cat was not adopted.

“In addition to having Whiskey neutered, if you decide to add to your family again, can we please ask that you get a friend for him at one of LA’s shelters so that you can help ease the overpopulation problem rather than exacerbate it?” wrote Peta celebrity relations manager Matt Kilbourne in a letter to the pair.

Newly-wed Britney Spears, who adopted an Australian shepherd pup called Sawyer in February, introduced Wendy to her Instagram followers in May. The Toxic singer, who also offered a glimpse of her wedding attire, which she wore during her ceremony with husband Sam Asghari, wrote: Introducing Wendy,” next to a cat emoji. “It’s MEOW time boys and girls. And yes, this is the veil to my wedding dress.”

Ahead of her wedding to Ben Affleck and just in time for the Christmas holidays, JLo added a new kitten to the family. The two-time Grammy nominee introduced the new pet cat to her 230 million followers on Twitter and Instagram. “Introducing … #Hendrix!!!” she wrote alongside a 10-second video of her new furry friend, also offering a glimpse of her lavish holiday decorations.

Mark Ruffalo isn’t afraid to post a cat photo on his social media platforms. The actor and director, who is also a well-known climate justice and renewable energy advocate, is a big fan of felines, and has often spoken about his pets in the past. This has included Biscotti, Hansel, Felix, Inky and Magnus. Last year, on US National Cat Day, he posted a picture of him with one of them, writing in the caption: “Cats for days, all ways, happy.”

Miley Cyrus is another star with a veritable menagerie. It’s hard to keep track of the Can’t Be Tamed singer’s list of pets. She was said to have a total of 14 animals during her relationship with Chris Hemsworth. In 2015, she adopted rescue cat Keke and has since added three more felines to her brood which also includes dogs, pigs and horses. One is Shanti Om, which has its own Instagram account.

Ed Sheeran makes headlines for his musical prowess as well as his pet cats. The British singer-songwriter famously lost one of his feline friends, Graham, his first cat, in 2019. Sheeran had rescued Graham, later renamed Baby Ba Boo. His manager looked after the pet while the star was on tour.

“We are absolutely heartbroken,” Sheeran wrote at the time. “He was such a dude. Funny and clever and best mates with a massive German Shepherd.” Sheeran also set up an Instagram account for his other feline companions Dorito and Calippo in 2018.

Wife of actor Alec Baldwin, Hilaria Baldwin, who is pregnant with their seventh child, is also a mum of two dogs and three cats. The most recent feline addition to their family was made in November, when she announced the couple had adopted a Bengal kitten. “We have a new member of our very large human and fur family…the kids have named her Cayetana Magdalena Baldwin,” she wrote on Instagram.

Ruben Randall - October 31, 2022 0
Money
Tristan Tate is a well-known entrepreneur, influencer, and former British-American kickboxer. He has worked as a...

Alicia Keys, 41, puts on loved-up display with husband as she...

2022-23 NBA Awards Predictions: Kevin Durant Will Win The MVP After...