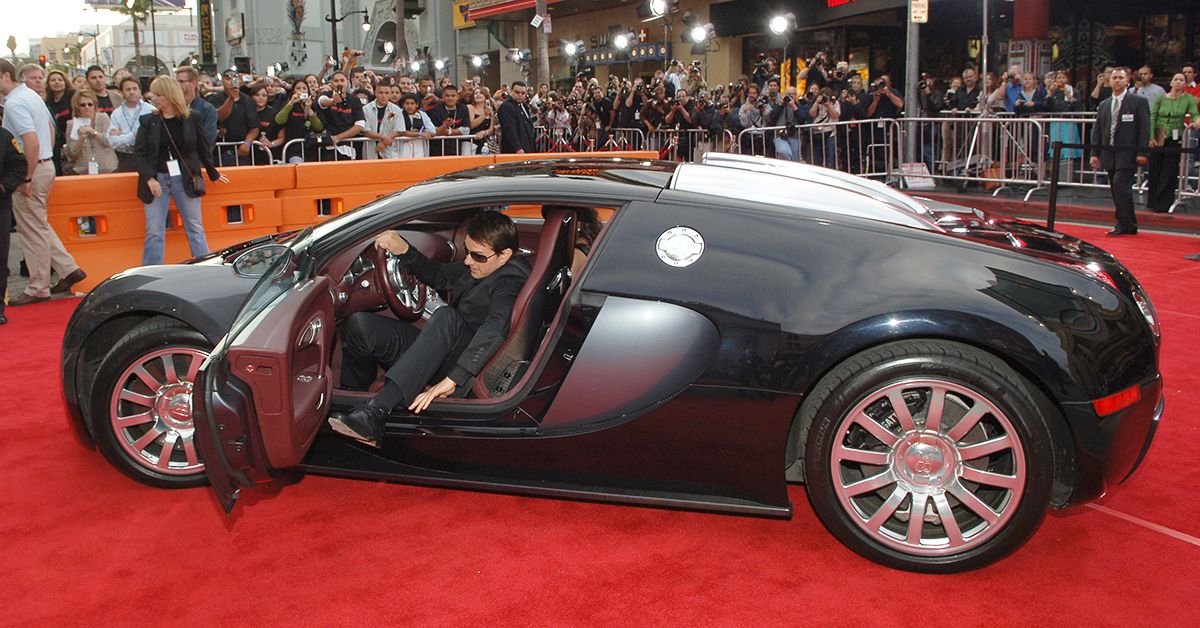 The three-time Oscar-nominated American actor and a multi-millionaire Tom Cruise needs no introduction. He has a net worth of $480 million and started making huge bucks after his first major success, Risky Business.

Updated March 2022: A thrill-seeker and gearhead at heart, Tom Cruise owns a plethora of exciting cars and fast bikes. So many, in fact, that we’ve had to update this list to include more of the incredible vehicles in his collection!

Tom Cruise is an automobile enthusiast, a passion he inherited from his friend Paul Newman. He has a massive collection of cars and motorcycles in his garage. Cruise has also been an active participant in the “Celebrity Championship” car races for more than a decade.

Tom Cruise is known to love the thrill of living life on the edge. Performing stunts and racing at high speeds on expensive cars and bikes give him joys and satisfaction. His love for fast and powerful automobiles has resulted in having a garage full of collectibles. Cruise has both vintage cars and newly released cars in his collection. He shares the same enthusiasm for the motorcycle as well. You can spot Tom Cruise driving (and riding) his collection at high speeds both in his films and real life.

Edge of Tomorrow is arguably an awful action flick, yet Tom Cruise still got paid. And he got to ride a Triumph Thruxton. In fact, when all of the equipment was shipped, Cruise picked up the Thruxton and rode it himself back to the set.

The 865cc bike has a top speed of 115 MPH, plenty fast to do all the crazy stunts! Featuring a four-stroke parallel twin-cylinder engine, the Thruxton can make 69 horsepower, and the iconic Triumph styling makes it one of the most incredible bikes Cruise has driven on or off set.

Tom Cruise owns the most powerful and most expensive production motorcycle globally. The cost of this motorcycle is estimated to be around $103,769. Cruise was seen speeding away on his Vyrus from his 51st birthday.

He rode his flashy motorcycle and made a dramatic exit from the Hotel Chateau Marmont. It is a chopper made by an Italian manufacturer and powered by a 1.2-liter engine. It is a lightweight motorcycle that weighs around 154 kgs. It can hit a high speed of 209mph. Despite being fast, it is stable, making it safe and secure.

This is a middleweight motorcycle with a 998cc engine with a maximum power of 322bhp. The top speed of this bike is 248mph.

Ducati is always on the top of the list when it comes to celebrity motorcycle collections. Cruise got himself a grey color Ducati 999R for his 46th birthday. He was spotted cruising with his Ducati 999R in LA, where he almost ran into a tree. His Ducati 999R was one of the 200 units that were ever manufactured.

The top speed of this Ducati 999R is estimated to be around 179mph. It was one of the most potent bikes ever built and claimed positive reviews from bike enthusiasts. This sporty bike was specially designed for racing purposes. It has a 6-speed gearbox.

Mission Impossible: Rogue Nation featured BMW motorcycles. In the movie, the black BMW S1000 RR was used as a getaway bike. The top speed of this sports bike is around 188mph.

Michael Dunlop, a bike racer, won many races and championships with this bike making it iconic for BMW. It is one of the most potent, stable, and dependable bikes in the world. The production started off with 1,000 units, but that number increased to meet commercial demand.

Tom Cruise’s passion for bikes led to him giving a dramatic entry on his Confederate Hellcat for the premiere of Mission Impossible 3. The Hellcat is known for its unique design. This bike is well ahead of its time. This bike has a special place in the hearts of bike enthusiasts.

M.S.Dhoni also owns this Confederate Hellcat, powered by a 2.2-liter engine that makes 121hp. The bike is mighty and stable compared to other bikes on the market. The cost of this bike is estimated to be around $65,000.

Launched in 2015, this was a redesigned version of the Honda 450 model. It had a four-valve engine, single-cylinder, and four-stroke 449cc engine. The weight of this bike is around 110kgs. It has 5-speed transmissions. Cruise drove this bike in the movie Oblivion, and it featured a futuristic design for the film.

Unlike Cruise himself, who performs most of his own onscreen stunts, the bike is simply present in the film to showcase the design and is not involved with any notable performances. The top speed of this futuristic bike is estimated to be around 105mph.

The seating position of this motorcycle is perfect and helps him glide along the road. The 55-year-old actor seems to be enjoying doing stunts and racing with this fantastic bike. It is not just a rugged bike but a legend. This bike can hit a top speed of 124mph.

Related: In Risky Business, It Was The Porsche 928 That Looked Better Than Tom Cruise

Ducati Desmosedici was a symbol of both pride and passion for motorcycle lovers. Back in 2008, Cruise was spotted sharing a ride on this rare bike with Cameron Diaz, his co-star from the famous movie Knight and Day. The Desmosedici was a limited edition motorcycle and was one among 1,500 units that were built. It had a powerful 800cc V4 engine that could hit a top speed of 200mph. The price of a Desmosedici was estimated to be around $72,500.

Tom Cruise rode a 1999 Triumph Speed Triple in his movie Mission Impossible II. The film was action-packed, and Cruise himself performed many stunts. Cruise is known for doing fantastic motorcycle stunts without a helmet, and this movie was no exception. The Triumph Speed Triple is considered the most engaging sports bike of its time.

It was powered by an 885cc and can hit a high speed of 143mph. This bike is easy to handle, and the seating position gives the proper comfort for riding this, making it great for long drives.

Although this movie didn’t feature Cruise performing major stunts like many of his others, that didn’t stop him from riding the famous Triumph, the bike that was used in this movie was later auctioned off to the Bonhams and was sold at a high price of $29,250.

The Bugatti Veyron is an ultimate classic with a special place in Tom Cruise’s garage. The stylish design of this Bugatti Veyron makes it the best-made cars to date. The high speed of the 16.4 variant, which Tom Cruise owns, can reach the speed of 253mph, making it one of the fastest cars in the world.

Despite being fast, it is easy to drive. Tom Cruise is among the first buyers of this fantastic car. For the premiere of Mission Impossible III, Tom Cruise showcased his new Bugatti Veyron.

Tom Cruise’s Ford Mustang Saleen S281 was one among the 100 that were initially built. Cruise drove a Mustang Saleen S281 in his movie Mission Impossible III which might be the reason for his connection to this car. After frantically trying to get that car for Tom Cruise, producer John Ficarra could get the car shipped from California to New Jersey overnight.

Cruise showcased this supercar during three movie openings in Manhattan that took place on the same day. The top speed of this Ford Mustang Saleen S 281 is around 150mph.

Tom Cruise owns a 1958 original series Chevrolet Corvette, an extremely iconic muscle car. In 2007, Cruise was spotted driving this car along with Katie Holmes for a romantic evening in LA to the eatery Mastro’s Steakhouse. Cruise was also having some trouble starting his Chevrolet Corvette while the couple was leaving the restaurant.

The 1958 Corvette was a two-door coupe with exclusive hood louvers and twin trunk spears. Cruise’s Chevrolet Corvette was one among the 9,168 units produced. It has a four-speed automatic transmission with an output range of 230 to 290hp.

Porsche is one of the famous luxury brands which has consistently topped the list of celebrity collections. The Porsche 911 is considered the most successful competition car in its era. Cruise has a black Porsche 911 in his garage.

The Porsche 911 is a two-door coupe that has an elegant exterior. The 996 series was in production from 1997 to 2004. This fantastic sports car was well ahead of its time and used Tiptronic automatic transmission.

Cruise owns a Mercedes CLK W209, powered by a 5.5-liter V8 engine. The CLK W209 launched in 2002, and the one Cruise owns has a five-speed automatic transmission. This legendary actor is known for collecting not just the fastest cars but also cars that come in style.

The Mercedes CLK W209 may not be the fastest, but it sure does give a comfortable and quality ride. This car might not be an expensive addition to his collection, but it certainly has excellent features. Cruise’s Mercedes CLK was last seen while the actor was still married to Katie Holmes.

See also  Who Is Tyler Henry? Net Worth, Grandmother And Key Facts Explained

This luxury sedan car has always been a celebrity favorite. The vehicle is powered by a 3.0-liter V6 engine. It has driver assistant features that can drive for extended periods without intervention, even though keeping an eye on it at all times is always advised.

This car is loaded with technology which makes the ride fun. This luxury sedan can read traffic signals and change lanes at 50 to 112 mph. It can even navigate using the GPS. The cost of this car is high, but that doesn’t stop multi-millionaires like Tom Cruise from buying it.

One of the biggest cars that Cruise owns is his Ford Excursion. Cruise has always been in love with SUVs, and owning this is significant proof. It is a heavyweight automobile as it should be.

Tom Cruise used a decoy Ford Excursion to escape the paparazzi while leaving the hospital after his baby Suri was born. Cruise used two decoy Excursions which left at the same time in a different direction, to divert the paparazzi from stalking him.

Cruise was first seen driving this 1949 Buick Roadmaster in the Oscar-winning film “Rain Man.” Cruise has a great love for vintage cars, and owning this car is evidence of that. Cruise owns a 1949 Buick Roadmaster, a two-door sedan that introduced the concept of VentiPorts.

The Chevrolet Chevelle was owned by Cruise before his stardom days. It is one of the oldest cars in Tom Cruise’s car collection. The Chevelle SS was a two-door coupe powered by a 6.8-liter V8 engine that gave an output of 370hp. This car was in production from 1969 to 1977 and was later discontinued to give way to other new vehicles.

Tom Cruise is seen driving and performing stunts in the movie Jack Reacher with this midsized automobile. The top speed of this car is around 162 mph, and about 86,000 units of Chevelle were sold during its production run.


Michael Stroup is an emerging author with experience writing for academics and personal portfolio pieces. Articles featuring JDM cars have been popular on his website. His love for cars combined with a passion for writing creates content that is engaging and fresh! Michael’s hobbies include snowboarding and family time.

Ruben Randall - June 23, 2022 0
Money
When Alexa first came on the market, many people did not hesitate to go and buy one, as new gadgets certainly have a way...