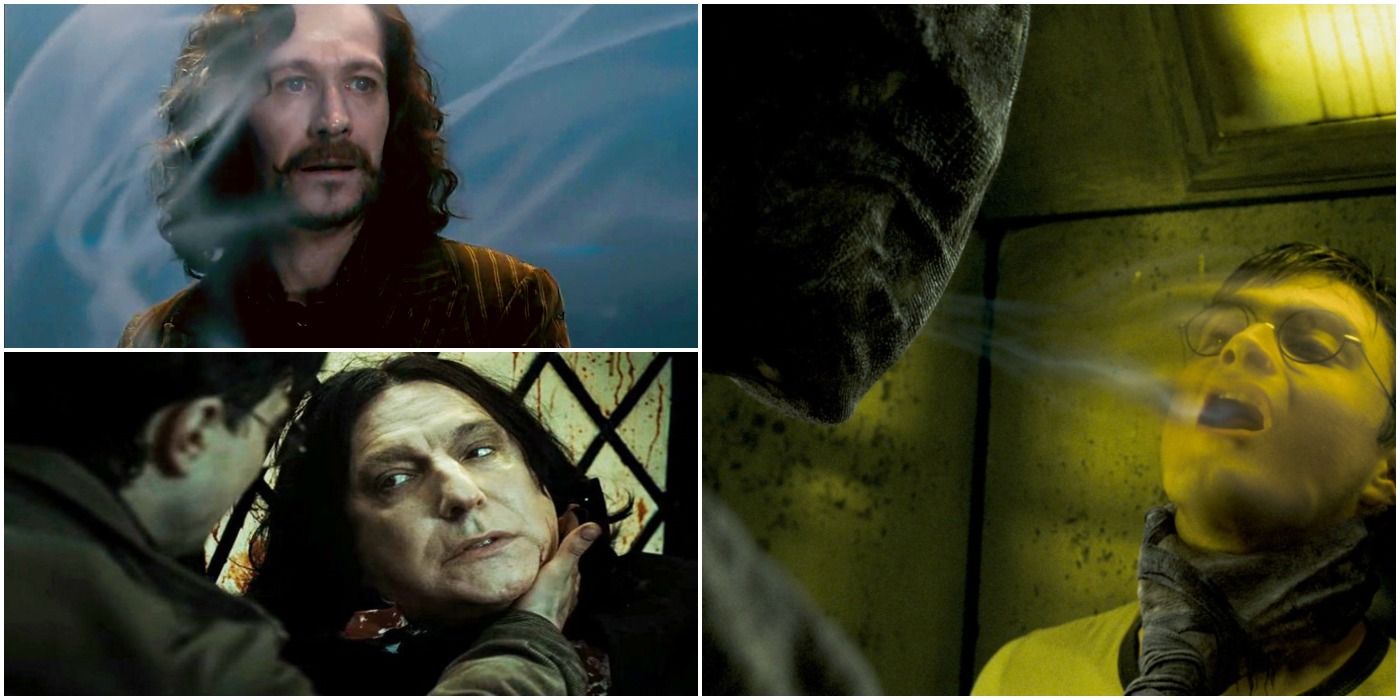 When first introduced to the magical world of Harry Potter, viewers are delighted by its colorful and reassuring façade. Much like the protagonist of the series himself, they are ignorant of the Wizarding World’s true depth, and of how vicious it can actually be.

In reality, the Wizarding World holds many gruesome secrets, and many of them manifest in lethal consequences for its inhabitants. Indeed, there are numerous ways to die in the series, and many of them are so horrific they almost make viewers happy they are simple Muggles.

10 Avada Kedavra Is A Terrible But Swift Death

The most infamous Unforgivable Curse, Avada Kedavra, is aptly named the Killing Curse, as its sole purpose is to kill. It is Lord Voldemort’s preferred method of targetting opponents, as it is fueled by hate and the desire to murder. But as notorious as this form of dying is, it is in fact far less horrific than others.

It may be terrible, but it is swift and painless, which is more than can be said for other ways of dying in the Wizarding World. Notable victims of this spell include the Potters, the Muggle Riddle family, Harry’s owl Hedwig, Albus Dumbledore, and Gellert Grindelwald.

9 The Unbreakable Vow Is Lethal If Broken

Magic has its own, rather brutal way of upholding contracts. One such example is the Unbreakable Vow. The spell involves a magical promise made between two parties, sealed by a third. Should either party break their vow, the result would be death. The actual method of dying isn’t revealed, and no notable victims are mentioned in the series. Viewers speculate that it will most likely kill instantaneously. If it had been gruesome, the details would have been mentioned.

Severus Snape makes Narcissa Malfoy such a vow, swearing to protect Draco. What makes the spell scarier is that it can apparently be performed by children. Fred and George Weasley almost make their brother swear an Unbreakable Vow when he is only five. One wonders how many reckless deaths such a magical promise has caused.

In Harry’s second year at Hogwarts, a series of petrifications befalls the famous school of magic. The culprit is eventually discovered by Hermione Granger and turns out to be Salazar Slytherin’s basilisk. Freed from the Chamber of Secrets by Tom Riddle’s shade—possessing Ginny Weasley at the time—the basilisk can kill with a single look.

The petrification victims avoid death because they set eyes on the basilisk through reflections or, in one notable case, through a ghost. However, Myrtle Warren isn’t so lucky. During Tom Riddle’s time at Hogwarts, she is killed by the basilisk and remains to haunt Hogwarts, in the bathroom where she met her end.

Harry’s godfather Sirius Black suffers from a tragic and unfair fate. Framed by Peter Pettigrew for betraying the Potters, he spends twelve years in Azkaban. After he escapes, he is forced to remain on the run, unable to clear his name. During Harry’s fifth year, he comes to his godson’s aid in the Department of Mysteries.

This leads to a confrontation with his cousin, Bellatrix Lestrange. While in the movie, he is hit with Avada Kedavra, in the books, Bellatrix shoots him with an unknown curse that shoves him into the Veil in the Death Chamber. Appearing to be a manifestation between the land of the living and the dead, the Veil instantly kills Sirius, not even leaving a body behind.

6 Illnesses Can Claim The Lives Of Witches & Wizards Too

Witches and wizards may live longer than Muggles but even they are susceptible to illnesses. One of the most well-known illnesses is Dragon Pox, which claims the lives of Draco’s grandfather, Abraxas Malfoy, and Harry’s grandparents, Fleamont and Euphemia Potter.

Vanishing sickness can make body parts disappear and has presumably led to at least one person vanishing altogether. Meanwhile, Draco’s wife, Astoria Greengrass, suffers from a blood malediction that causes a debilitating state. This condition leads to her premature death in 2019, as revealed by Harry Potter and The Cursed Child.

The Wizarding World is home to many magnificent magical creatures. Even excluding ancient basilisks, these beasts aren’t always friendly, which can sometimes lead to deadly consequences. It’s not uncommon for Tom Riddle’s familiar and Horcrux Nagini to make such attacks. Some of Nagini’s most notable victims include Arthur Weasley—who miraculously survives—and Severus Snape, who unfortunately doesn’t.

See also  'It's the Best Feeling in the World'

Other notable attacks of this type are actually caused by werewolves. Fenrir Greyback has a preference for targeting children and kills numerous people before finally being brought down. One example is the young Lavender Brown, whom he attacks during the Battle of Hogwarts. Hermione attempts to save her, but she dies later of her injuries.

Avada Kedavra isn’t the only dangerous curse around. There are countless cases of such curses, including the Blasting Curse, the Entrails-Expelling Curse, and Severus Snape’s Sectumsempra, which Harry Potter casts on Draco Malfoy. Many of these spells kill far more painfully than Avada Kedavra.

In some cases, objects also have horrible curses placed on them. An expert at such magical arts, Lord Voldemort uses it to protect the Horcrux in the Gaunt Ring. Albus Dumbledore falls prey to the curse and only survives through a combination of his own magical prowess and Severus Snape’s skills. The curse still causes severe necrosis in Dumbledore’s hand and would have painfully spread had Albus not been killed with Avada Kedavra. Another example of such a curse is the spell on the opal necklace Katie Bell nearly falls victim to.

Fire is a favorite element in many spells, so it comes as no surprise that numerous magical deaths involve it. Some examples include Fiendfyre, which kills Vincent Crabbe, and Gellert Grindelwald’s Protego Diabolica, which claims the life of Leta Lestrange. The sacrificial protection on Harry Potter also burns Quirinus Quirrell to ash when Harry touches him, while Protego Horribilis vaporizes the Snatchers attacking Hogwarts.

Finally, magical creatures can also cause such deaths, and the Goblins of Gringotts learn this the hard way after the Golden Trio break into the bank. When they escape through a captive dragon, the goblin Bogrod is killed by its flame.

The Fantastic Beasts franchise adds a great number of intriguing details to the Wizarding World, but one of the most horrific ones is the chosen method of execution of the MACUSA. Prisoners are taken into the Death Cell, where their pleasant memories are used in the Death Potion.

The prisoner’s chair would levitate over the potion as they viewed these memories one last time. The condemned would then be lowered into the highly corrosive potion. It’s a horrific way to die, and Tina Goldstein only escapes it at the last second.

The worst way to die in the Wizarding World is easily the Dementor’s Kiss. Having been described as a fate worse than death, this form of capital punishment involves the Dementor sucking out the soul of its victim. This leaves the body an empty shell, alive, but in a permanent vegetative state. Worse still, this method of execution leads to the Dementor consuming one’s soul, so much so that people can’t even return as ghosts.

It’s unclear what happens to the soul once it is inside a Dementor, but it may very well be an eternity of misery. Known victims of this form of death are Barty Crouch Jr. in the main universe, and Severus Snape, Ron Weasley, and Hermione Granger in Harry Potter and the Cursed Child.

NEXT: Harry Potter: 10 Harsh Realities Of Being A Wizard


Next
Harry Potter: 15 Strongest Spells In The Wizarding World, Ranked

Ruben Randall - October 15, 2022 0
Celebrity
Love Island star Gemma Owen has responded to the announcement that Maya Jama will become the new host of the show.Speaking to Digital...

‘He’s so charming and so confident and so capable’: Stars who...