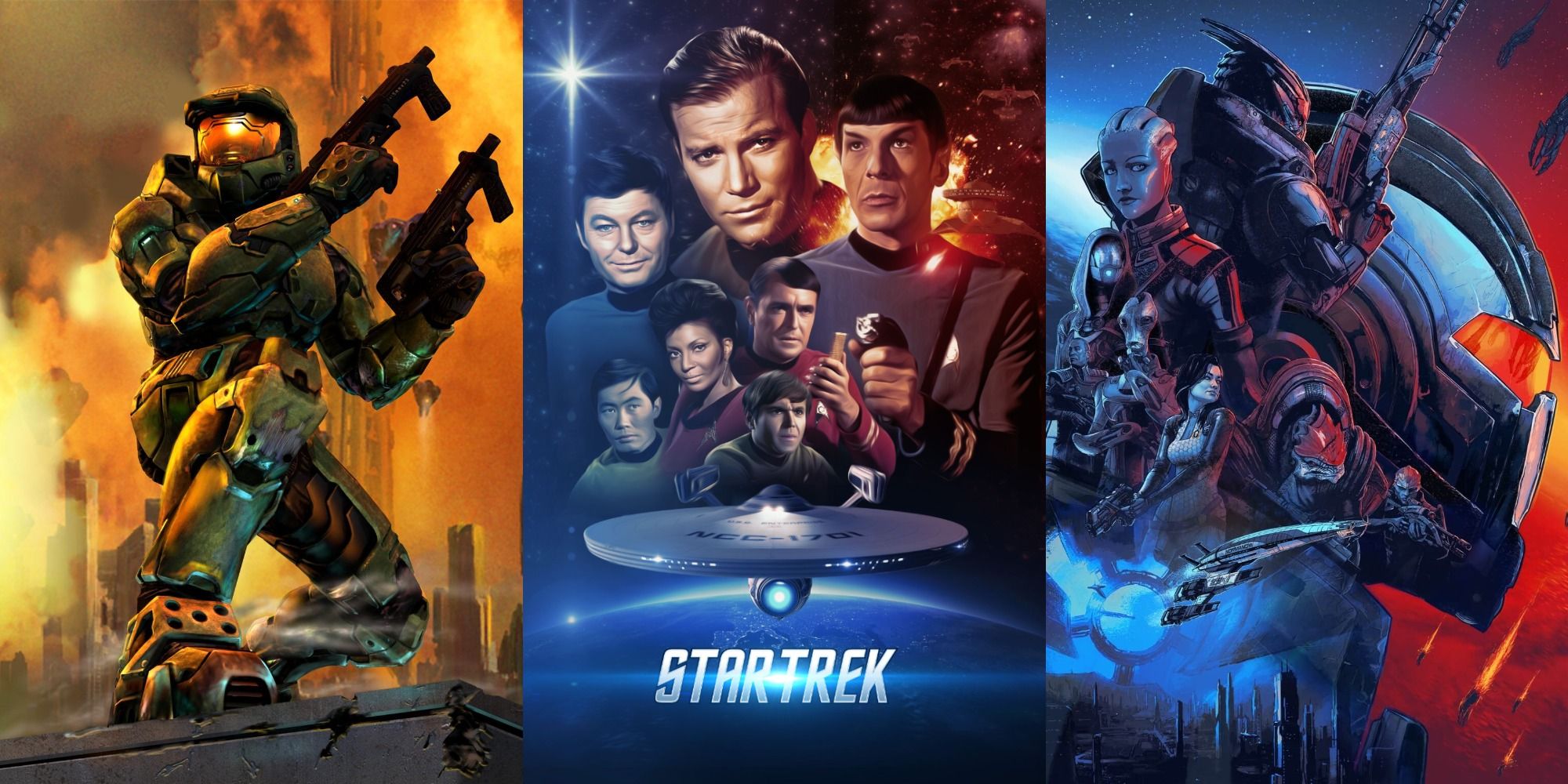 Star Trek is a franchise that has proven far more significant than even its creator Gene Roddenberry could have anticipated when he initially dreamt up the idea. With the recent success of Strange New Worlds alongside the current Trek-verse hits Picard and Discovery, this fictional galaxy shows no signs of slowing down. For decades, the franchise has proven to be an influence on other television shows, feature films, comic books, and of course, video games.

While the Star Trek universe has a healthy of video games to its name already, to be honest, seeing how Star Trek has played a part in the creation of acclaimed video games unrelated to the franchise is more interesting. With that being said, here are some of the best Trek-like games Trekkies will undoubtedly love.

No Man’s Sky is a controversial game, as Hello Games were seemingly promising the world in the time prior to the game’s release. While it was a solid stress-free game, the initial product proved massively disappointing, as the multiple galaxies and beautiful environments couldn’t make up for how barren it was.

RELATED: The 10 Best Star Trek Video Games, According To Ranker

In fairness, Hello Games has been updating the game with new content that has made the quality skyrocket, but even before that, the game was very similar to Star Trek. The game has a relatively optimistic view of the future, and exploring strange new worlds and new civilizations is a core part of the game.

On the surface, Halo, a well-known Xbox exclusive series, has little in common with Star Trek other than being a space epic. Far more militaristic than the franchise’s view of the future, the armored, gun-toting Master Chief doesn’t bear many similarities with the likes of Captains Kirk and Picard.

That said, there are some connections between Halo and Trek, not only because Master Chief and crew are exploring worlds unfamiliar to them, but there are also similarities in the enemy types. These include warrior-like aggressors known as Elites and the individuality-destroying Flood, bringing to mind Trek-baddies The Klingons and The Borg.

Ratchet and Clank generally tend to dabble in Trek aspects quite often, but the third entry bears the strongest resemblance to the franchise. In Ratchet and Clank: Up Your Arsenal, the iconic duo is enlisted into a very Galactic Federation-esque group known as The Galactic Rangers to battle the robotic Dr. Nefarious.

RELATED: 9 Playstation Productions Projects To Look Out For After The Release Of Uncharted

The worlds that Ratchet and Clank explore in Up Your Arsenal feel much more alien and strange than the previous two games, calling back to the main mantra of Star Trek. Simultaneously, there is a tie to the reality of Star Trek, as the fan-favorite character Captain Quark has a similar ego to Captain Kirk actor William Shatner.

As a franchise, the Metroid series has drawn more from Alien, especially the 1979 horror classic’s ominous atmosphere, but when the Metroid Prime series kicked off, some Star Trek elements could be picked up on. The third game, Metroid Prime 3: Corruption, has the most in common with Star Trek, as the iconic bounty hunter Samus Aran is now teaming up with The Galactic Federation to combat the threat of Dark Samus…it’s complicated.

The exploration of bizarre worlds previously thought unfathomable is a facet that Star Trek and Metroid share, but the latter franchise is slightly less jovial about that prospect. Aside from the Star Trek parallels, the game is a blast from start to finish, a worthy ride for any Trek fan to dive into.

While Star Trek itself has a pretty famous MMO, anyone who wants to try a Trek-like MMORPG that isn’t tied to a brand should give EVE Online a go. Kicking off only a few years before World of Warcraft took the world by storm, EVE Online managed to brave the blizzard and its servers are still running to this day.

EVE Online does have typical MMORPG cliches, but it’s still a solid space-based game with profound lore and a fun combat system. The game is now free-to-play, thus making it more accessible to the general public.

In the real world, the day-to-day operations of a ship like The U.S.S. Enterprise would be an absolute nightmare, with FTL: Faster Than Light giving Trekkies and gamers alike a taste of what that would be like. FTL is an indie strategy game where the player struggles to maintain a starship in the middle of a conflict with an enemy faction known as The Rebellion.

RELATED: The Ten Most Popular Live-Action Versions Of The Starship Enterprise, According To Reddit

FTL: Faster Than Light has gained a lot of attention due to its unique setting and excellent gameplay, with the developers wearing the game’s influence on their sleeve, Star Trek clearly being among them. That said, anyone who wants to jump into this game should be warned that even the easy difficulty setting is brutally difficult.

While it is an old-school RPG, albeit online, Space Station 13 has an outrageous level of detail that betrays its visual simplicity. The game places multiple players on a lowly space station, with each filling a specific role. During their playthrough, they are bombarded by a variety of different threats including shape-shifting aliens, rogue factions, and Eldritch abominations.

Much like FTL, the game shows what it would be like to operate one of the many ships or stations like those seen in the Star Trek universe, but depending on the player, it could be far more chaotic. However, if that is how someone wants to play the game, they should be warned that many of the game’s admins seem to be allergic to fun.

Developed by Obsidian Entertainment of Fallout: New Vegas fame, The Outer Worlds is a spiritual successor to the Fallout series, albeit in space. Taking place in an alternate timeline where the assassination of William McKinley never happened, the terraforming and colonization of alien planets have run rampant.

Oddly enough, in Star Trek: The Original Series, the galaxy wasn’t the socialist utopia it’s become known for, with the universe bearing a resemblance to the more lawless environment the characters of The Outer Worlds find themselves in. Nonetheless, The Outer Worlds has a classic sci-fi feel with environments the player can easily get lost within.

StarCraft is obviously reminiscent of Star Trek, but it does feel a little removed from the optimistic tone the franchise was known for at the time of the game’s release. In all honesty, StarCraft has more in common with Starship Troopers than Star Trek, as the game deals with a war between the jingoistic Terrans, the religious Protoss, and the predatory Zerg.

See also  Ferrari’s Website Launched a Fake NFT Collection After Getting Hacked! How Much Was Stolen?

RELATED: The Grandest Strategy Games Of All Time, According To Ranker

However, Star Trek hasn’t always been known for being sunshine and rainbows, as Deep Space Nine, which does have a lot in common with StarCraft in both setting and themes, is known for being a lot darker than Star Trek typically was at the time.

Ignoring the more recent spinoff Andromeda, the Mass Effect series has proven to not only be an acclaimed series of video games, but an acclaimed sci-fi series in general. The revered trilogy, telling the story of The crew of The Normandy, especially its commander, and their battles with the alien menace known as The Reapers, has absurdly deep lore that could be explored forever.

Though the third game came equipped with an ending that many saw as a letdown, Mass Effect proves it isn’t about the destination, it’s about the journey and the friends that are made along the way. Not only does Mass Effect pay homage to the likes of Star Trek, but it also stands right alongside it in the annals of fantastic science fiction.

NEXT: 10 Alien Races From The Mass Effect Universe, Ranked


Ever since he was a young lad, Seth Rector has had a love for all things that reek of geek. Movies, tv shows, comic books, and video games are what he considers his wheelhouse. A writer at heart, Seth says he’s over the moon now that he can write about what he loves. When he isn’t writing for Screen Rant, he is putting his film degree from Lights Film School to good use by working on future film projects.