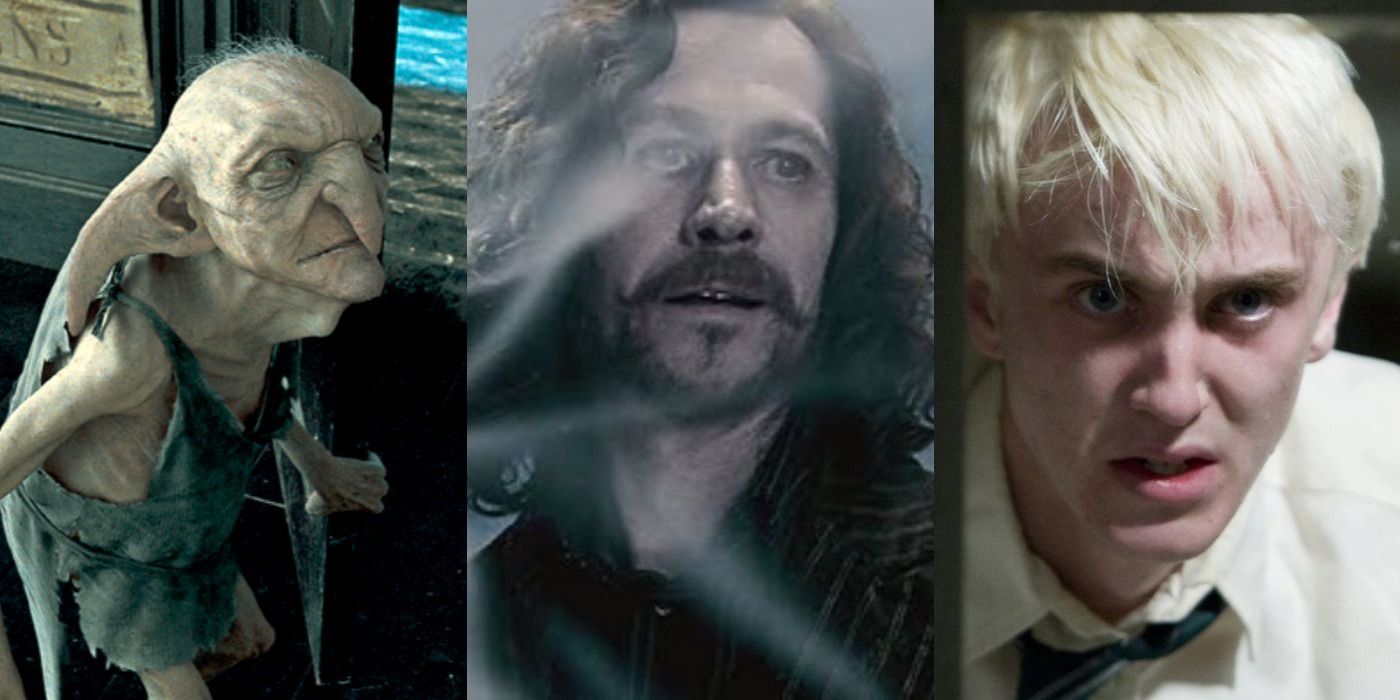 The world of Harry Potter created some of the most beloved characters in any franchise, but they didn’t all start that way. At their first introduction, fans initially despised some characters but grew to love them over time.

Viewers hated some characters due to their annoying personal traits or storylines that painted the characters in a bad light. While fans loved other characters, these players in the Wizarding World had personalities that could’ve made them unlikable. Whether they were strict, a little hard to handle, or simply evil, many unlikable characters grew on fans over the seven books and eight movies and became favorites.

10 Draco Malfoy Was Deeper Than He Appeared

Draco Malfoy was Harry’s nemesis at Hogwarts and the son of the Death Eater Lucius Malfoy. Draco was wealthy, spoiled, and a brat, often stating that his “father would hear about this.” In addition to this, he bullied students frequently and targeted slurs toward the Muggle-born Hermione.

On the surface, Draco was shallow and mean, but fans learned that there was more to him than met the eye as the stories progressed. As fans came to see the life that Draco was born into, and the way he struggled with what his father expected of him, it was hard not to come to love him.

Severus Snape was the Potions professor who disliked his students, especially Harry, and had little patience for mistakes. He was snarky and mean and even became Neville Longbottom’s biggest fear. He also was secretly a Death Eater, infiltrating Hogwarts for Voldemort.

As viewers learned, Snape acted as a triple agent, working for Dumbledore but making Voldemort believe he was a Death Eater disguised as a professor. Although he was on Voldemort’s side in the First Wizarding War, Snape switched allegiances when Lily Potter, the woman he loved, was killed. Fans often debated Snape’s actions and intentions, whether good or bad, but ultimately many grew to love him when he revealed his role in stopping Voldemort.

8 Bellatrix Lestrange Was So Bad, She Was Good

Bellatrix Lestrange was Voldemort’s most vicious and loyal Death Eater, giving her life for his cause and taking many lives along the way. She had little regard for anyone other than Voldemort and escaped from Azkaban after being imprisoned for her torture of Frank and Alice Longbottom so that she could continue serving him.

Bellatrix affected many characters’ lives negatively, such as making Neville an orphan and killing Harry’s godfather, and her actions were inexcusable. However, her sheer evilness and willingness to do Voldemort’s bidding captured fans’ interest, and she became one of the most loved Death Eaters.

7 Minerva McGonagall Was Strict With Her Students

Minerva McGonagall was the beloved Transfiguration professor who could transform into a cat, taught her students how to turn objects into something else, and was one of the best Hogwarts professors. However, while many fans have loved McGonagall since day one, her personality could’ve easily made some dislike her at first.

McGonagall was strict with her students, not allowing any horseplay. While the students needed a teacher like her, it wouldn’t have been surprising if fans didn’t like McGonagall due to her teaching style. McGonagall might have even reminded some fans of a difficult, unlikable teacher they had in their own lives. However, while she may not have been the “fun” professor, McGonagall was incredibly effective and would do anything for her students, making her a favorite among characters and fans alike.

6 Pansy Parkinson’s Popularity Grew Through The Rise In Fanfictions

Pansy Parkinson was one of Draco’s friends who often clashed with Hermione. While Pansy played little to no role in the films, she was much more prominent in the books, often seen alongside Draco, Crabbe, Goyle, and other Slytherin students.

RELATED: 10 Weakest Harry Potter Characters Who Deserve To Be Strong

Pansy treated anyone who wasn’t a Slytherin badly and encouraged Draco’s bullying of other students. Pansy was unlikable in the books and movies, but thanks to the world of fanfiction, in which fans could expand on her character and personality, many readers came to like her. Even if her actions in fanfiction aren’t canon, they still made her much more favored among longtime fans.

5 Dobby Was An Independent House-Elf

Dobby was the Malfoy’s house-elf who intruded in the Dursley’s home to keep Harry from coming back to Hogwarts in his second year. Despite Dobby’s efforts, Harry went back to school and eventually helped free the elf from his enslavement to the Malfoys. Dobby played a much more significant role in the books, but he was still essential in the films.

In Malfoy Manor, Dobby dove in front of Harry and his friends to protect them from Bellatrix’s knife, which killed him. His death was highly emotional and devastated fans. Dobby was a little obnoxious and loud but quickly became one of the most beloved characters in the series.

Hermione Granger was the brilliant, astute, by-the-books student who quickly became best friends with Harry and Ron. She used her academic and practical smarts to steal the show, saving Harry’s life multiple times and uncovering the secrets of Hogwarts.

Hermione’s know-it-all attitude in the early movies tended to rub some teachers and students, as well as fans, the wrong way at first. While most fans loved and admired her since the beginning, Hermione had the type of personality that was unlikable on the surface, and it’s not surprising that many of her classmates thought she was annoying.

Percy Weasley was a teacher’s pet, the prefect of Gryffindor, and the Head Boy of Hogwarts. Percy was the third son of Molly and Arthur, the older brother to Fred, George, Ron, and Ginny. When he graduated from Hogwarts, Percy took a job at the Ministry of Magic and distanced himself from his family when they insisted that Voldemort had returned.

Percy entirely ignored his whole family until the Battle of Hogwarts, when his allegiances shifted. Fans generally disliked Percy throughout the series due to his stuck-up, stick-in-the-mud attitude and his betrayal of his extremely likable and loving family. However, his return at the end of the series to fight alongside his brothers made him more likable.

Sirius Black was a boogeyman-like figure when he escaped from Azkaban to find Harry. He spent years in prison after the First Wizarding War for the murder of Lily and James Potter, along with twelve Muggles, and the attempted murder of Peter Pettigrew. Viewers later discover that Peter, a Death Eater who led Voldemort to the Potters on that fateful Halloween, framed Sirius.

Harry and Hermione helped Sirius escape and go into hiding for two years, and he developed a very close relationship with his godson. Tragically Bellatrix killed Sirius in The Order of the Phoenix, taking him away too soon. Fans initially hated Sirius, thinking he was a dangerous monster, but they quickly grew to adore him when they discovered his genuine nature, and he became one of the most loved characters.

1 Kreacher Grew To Respect Harry And His Friends

Kreacher was the house-elf for the Black family who was undyingly loyal to Sirius’s mother, Walburga. So Sirius returned to 12 Grimmauld Place as the rightful master, Kreacher begrudgingly followed his orders, though he made it clear he wasn’t happy.

Kreacher was angry when the Order of the Phoenix took up residency in the home, and he especially hated Hermione, as the Black family infamously despised Muggles and Muggle-borns. After Sirius died, Harry became Kreacher’s master, which enraged the elf, but his attitude changed after Harry gave him the fake locket and note from Regulus Black. He grew loyal to Harry and even led the other house-elves at Hogwarts into battle against Voldemort and the Death Eaters. Kreacher started the series as unbearable and extremely rude, but fans began to love him once his attitude changed.


Madisyn Espinoza grew up in Las Vegas, Nevada, and graduated college from UNLV in 2019. She then went on to become a criminal investigator for a few years before deciding to go a different route. She now lives with her husband, puppy, and bearded dragon and plans to get a Master’s degree in English. Madisyn loves Disney, reading, and funny Tiktoks.

With ‘Smart, Funny & Black,’ Amanda Seales has created a showcase for ‘ebony excellence’