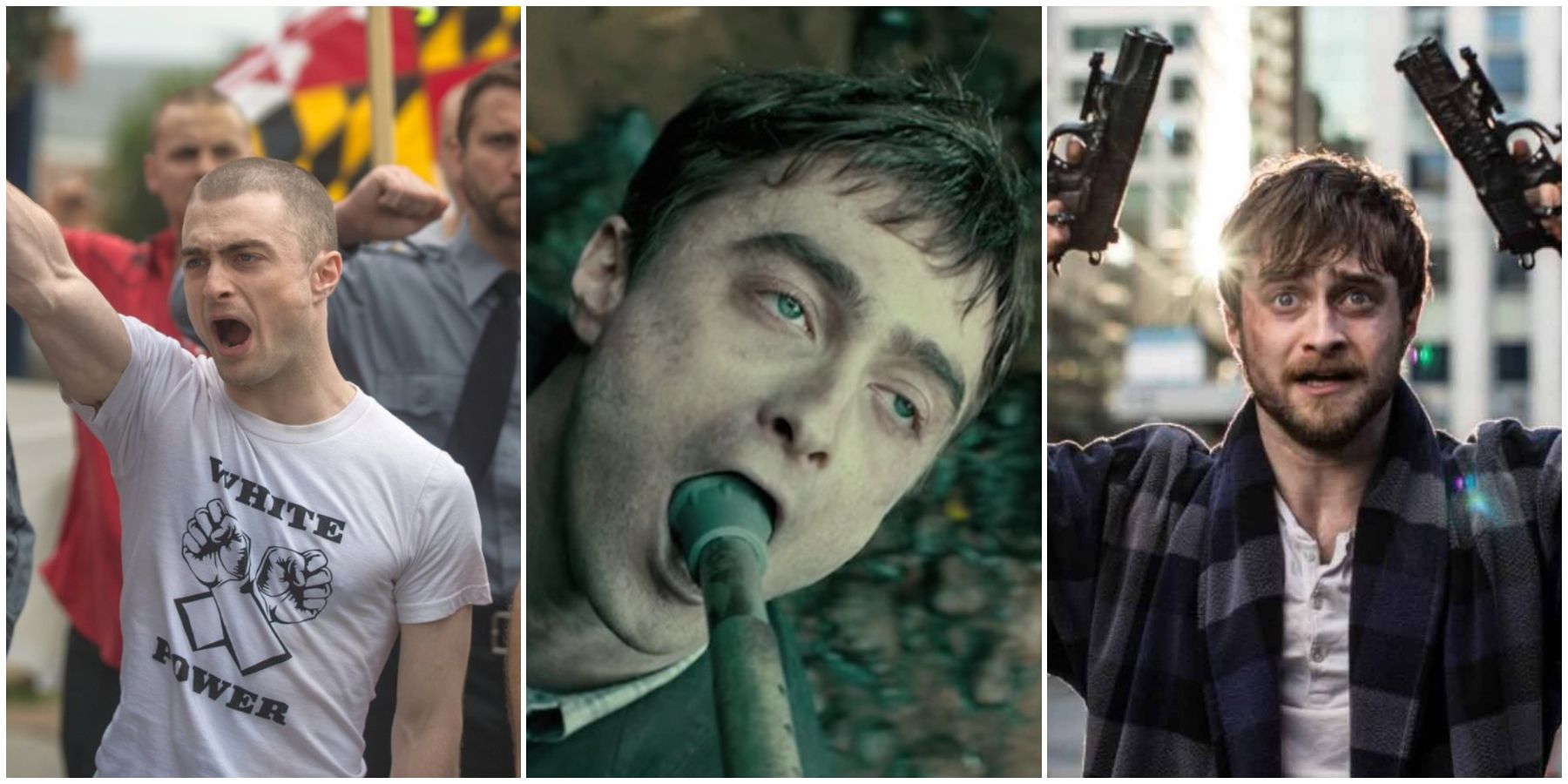 Despite taking on numerous daring and dynamic roles, Daniel Radcliffe will likely be forever known as the boy who lived, Harry Potter. It’s his most famous and extensive role and he could probably slip back into Potter’s character effortlessly even now after spending so many films as that character. This somewhat leaves a bittersweet reputation for Daniel Radcliffe.

RELATED: Harry Potter: Things About Lord Voldemort The Movies Changed From The Books

Because he actually has so many other roles that challenged his skills and range as an actor. In fact, he’s dipped into many genres including comedy, action, horror, and political movies. Most of his roles are underrated or underappreciated, for that matter. So how about we all tuck old Harry Potter back to his cupboard and check out some of Daniel Radcliffe’s other movies?

Kill Your Darlings is a daring role for Daniel Radcliffe as the film is a true-to-life story based on American novelist Jack Kerouac’s circle of friends who got entangled in a murder case and mystery back in the 1940s. Daniel Radcliffe is cast Allen Ginsberg, a literature prodigy who was competing for the affection of his charismatic classmate, Lucien Carr.

Problems arise when Lucien Carr is murdered and Kerouac and another of Allen’s friends were arrested. Allen and his friends’ lives then spiral into a drama filled with LGBTQ+ themes and Beat poet writer culture along with some quirky jazz fitting of the 1940s.

Yet another mad role for Daniel Radcliff, in this film he becomes a reluctant member of the criminal battle royale promoted by a group called Skizm. It all began when a bunch of thugs broke into his house, kidnapped his girlfriend, and bolted pistols into both of his hands. Next thing he knew, he now has to participate in Skizm’s contest to see which criminal, psycho, or contender wins.

While he has already somewhat proven his acting chops as a heartthrob in the later Harry Potter films, Daniel Radcliff went above and beyond with his own romance genre film named The F Word. To be more precise, it’s actually a rom-com film where his character, Wallace, falls in love with his friend who already has a boyfriend.

So, Wallace desperately tries to hide his affections while still interacting with her friend. To add to Wallace’s apprehension, he’s also a medical school dropout, and he fears this might ruin his shot at a romance with his friend. Alongside Daniel Radcliffe is an equally impressive dark horse actor, Adam Driver where their scenes have become a meme these days.

Ever wanted to see Daniel Radcliffe take on the elements of nature and be at his most vulnerable role in a film? Then Jungle will surely prove that he’s capable of uncomfortable roles. It’s a survival thriller film where he stars as Yossi Ghinsberg, a thrillseeker who blindly accepts an “adventure” into the Amazon rainforest.

RELATED: Harry Potter: Characters That Are Far More Important In The Books Than The Movies

Things took a turn for the worse and Yossi got separated from his friends, all alone and clueless in an alien environment. It’s also worth noting that this is a true story and Daniel as Yossi tapped into hardcore survivalism in order to portray Yossi’s incredible plight.

Another film that’s based on a real-life story where Daniel Radcliffe gives his all is Escape From Pretoria. This one is a political film where he takes on the role of Tim Jenkin. Jenkin, along with another close friend, was imprisoned in South Africa for working on behalf of the African National Congress during the anti-apartheid movement.

Determined to escape, Jenkins and his friend hatch up one of the most daring and cleverly planned prison breaks. The story does focus more on the thrilling prison break tale but intersperses some political discourse amidst all the suspense. Seeing a bearded and mature Daniel Radcliff here definitely helps in changing shedding off the default Harry Potter image.

Victor Frankenstein is a movie with a dream duo casting of James McAvoy who plays the titular mad scientist and Daniel Radcliffe as Igor. It’s a different spin on a classic tale as even Igor’s character got an extreme makeover in the form of Daniel Radcliffe’s gorgeous facade.

That, however, was explained in the film, so it can be forgiven. In any case, Daniel Radcliffe assumes his standard part here where he often acts as a conscience to Dr. Frankenstein, which is a bit of a far cry from the original character. Still, it works especially since Daniel Radcliffe’s acting makes their friendship seem more endearing and his concern as the mad scientist’s partner more believable.

Thanks to Prisoner of Azkaban, Daniel Radcliffe is possibly no stranger to horror-oriented acting or stories. Because he was fit right in The Woman in Black. It’s one of his few horror films in existence and in here, he’s a lawyer named Arthur Kipps who gets entangled in a horrific village haunting after he’s tasked to assess the value of a provincial estate.

Turns out the house he’s surveying is home to a vengeful spirit whois taking out her hatred against everyone in the village. Sure enough, they all have something to do with it and it’s up to Arthur Kipps to find out how to solve this riddle. This role has certainly been done before in films like Sleepy Hollow but Daniel Radcliffe still manages to bring in his own respectable performance for this gothic horror.

RELATED: Harry Potter: The Most Powerful Characters In The Lore

He wakes up one day to find that he has grown horns and now has supernatural powers. So he sets out to clear his name by finding his girlfriend’s murderer in the most violent and rebellious way possible. In a sense, this is Daniel Radcliffe also rebelling from his usual role, which makes it even more poetic.

The bold thing about Daniel Radcliffe is that he doesn’t shy away from highly-political roles and his best one yet in this category is Imperium. It’s an anti-fascism film that shifts its lenses into the white supremacy neo-fascist pockets of US. As an FBI agent, Nate Foster is tasked with infiltrating one of these groups to uncover some kind of terror plot.

Daniel Radcliffe goes all in on portraying one of their types and even shaved his head to look the part. Not only does the film offer an insight into the layers of neo-fascist groups in the US but also gave Daniel Radcliffe a chance to become a subtle and unsung hero who didn’t need magic.

By far, Daniel Radcliffe’s wierdest role ever was in Swiss Army Man. Here, he turns into a living and paralyzed corps who could talk, is immune to damage, and has a million practical uses from being a purified water dispenser to turning into a makeshift speedboat who propels himself by farting.

It’s best not to question the logic of this arthouse movie. Everyone simply watched it to see Daniel Radcliffe act like a multipurpose corpse which has never been done before in cinema. And yes, now it’s difficult to see Harry Potter in this kind of role as Daniel Radcliffe’s corpse character resembles Harry’s flying broomstick here more than anything else. At this point, Daniel Radcliffe succeeded into finally changing his image though the cost was probably a bit too high… as a kite.

Pokemon Unite will be adding Sylveon and Mamoswine in the near future, but many fans will want to see more Eeveelutions added before long.


Sid was born, did some stuff, then decided to become a writer.

He finds respite in the sweet embrace of mass media escapism after having risked his life too many times as a journalist covering warzones and depressed areas. Nowadays he mostly risks his bladder as he tries to hold his urine waiting for those precious post-credits scenes at the movies or trying to kill Souls-like bosses. So far it’s going well. Probably.

FreightWaves Classics/Pioneers: Women made their marks on aviation history (Part 5 – the 1970s)

Olivia Cooke shows off her toned figure in a sheer black top as she...