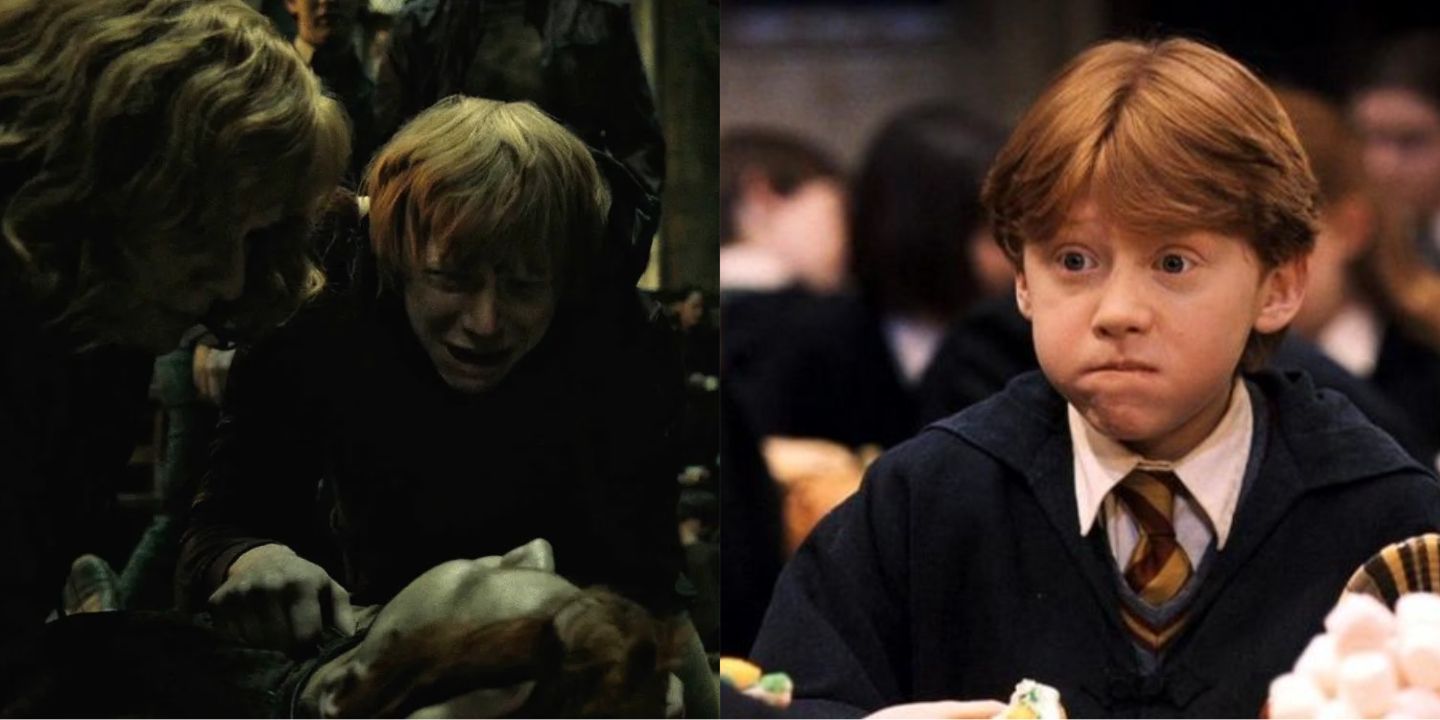 Ron Weasley, the best friend and sidekick of the Harry Potter film franchise’s title character, is well-known as a funny friend and a class clown. Ron often steals the spotlight with many memorable scenes, witty lines, and a lot of the comedic moments in the series, along with his twin brothers. However, Ron also experiences many difficult and sad situations during his time at Hogwarts and the Second Wizarding War.

RELATED: 10 Anime Characters Ron Weasley Would Be Friends With

Being Harry and Hermione’s best friend subjects Ron to many harrowing moments that deeply affect both him and the viewer. Surrounded by deaths and sacrifice, Ron goes through more heartbreaking moments than any young wizard should have to.

10 Ron Is Mocked By Draco Malfoy

Ron Weasley has a huge, loveable family, with six siblings and two wonderful parents. However, his family is frequently the target of jokes and mean comments. Ron’s family does not have a lot of money and, being the youngest boy of six, he is often seen wearing faded, hand-me-down robes.

When Harry Potter audiences first meet Draco Malfoy, he attempts to use Ron’s poor family as leverage to befriend Harry Potter. However, luckily, Harry chooses Ron due to his personality, not who his family is.

9 Ron Sacrifices Himself During The Chess Game

Despite having a nervous disposition and being scared easily by many things, Ron steals the spotlight and proves many times that he is a brave Gryffindor when it counts. In Harry Potter and the Sorcerer’s Stone, the Golden Trio have to play chess to pass through a room on the way to the stone.

Ron takes charge as a knight and sacrifices himself so Harry can win. The horse is crushed and Ron falls to the floor, being knocked out. Whilst it is nice to see Ron be the hero, seeing such a young boy put himself in harm’s way to help a friend is something he should never have to do.

8 Ron Defends Hermione But It Backfires

By the time Second Year rolls around, Hermione and Ron are on very good terms, despite the rocky start to their friendship. In Harry Potter and the Chamber of Secrets, Malfoy insults Hermione, calling her a Mudblood. Knowing the severity of this word, Ron attempts to cast a spell on Draco, but due to Ron’s broken wand, it backfires. This leaves Ron uncontrollably vomiting slugs.

It was nice to see Ron stand up for his friend, but it was also incredibly sad to see the action cause him so much pain. Any fan could sympathize with how awful it must be to be in Ron’s position.

Often seen as just “Harry Potter’s stupid friend”, Ron feels betrayed when Harry is chosen to represent Hogwarts in the Triwizard Tournament. While Harry swears he never entered his name, Ron can’t help but think that Harry wants to achieve another moment in the spotlight.

This is a heartbreaking moment as, not only does Ron not believe his best friend, but it shows just how much living in Harry’s shadow gets to him. The two are on bad terms for a while, but they eventually manage to work their friendship out.

In Harry Potter and the Deathly Hallows, Hermione has developed the ability to apparate, and the trio frequently uses apparition to get to their next destinations without being followed. However, on one occasion, their teleportation goes wrong and Ron is left splinched, leaving a portion of his upper arm behind during a journey.

Luckily for Ron, Hermione has just about every potion and elixir in her bag to help him through the pain, heal his wound, and care for him. Seeing Ron in pain, and Hermione desperately trying to help him, is both incredibly sad and also a key moment in their relationship.

When on the run, Ron travels with a radio that informs him of any witch or wizard disappearances. When wearing the locket Horcrux, which worsens everyone’s mood, Harry becomes annoyed by Ron’s constant listening to the device.

However, Ron is only listening to make sure that his family is okay. Being away from them for so long, with no means of communication, is something that Ron struggles with. All he wants is to know that they are safe, which is difficult information to obtain when on the run.

4 Ron Leaves The Group In Harry Potter And The Deathly Hallows: Part One

Having been wearing the locket Horcrux for a while, Ron finds himself in a very volatile mood in Harry Potter and the Deathly Hallows: Part One. Annoyed at the trio not getting very far in their search, and being kept from their loved ones, Ron lashes out at Harry and Hermione.

Ron tells Harry that he cannot understand Ron’s pain because he “has no family,” which, knowing Harry’s past experiences, is an incredibly harsh thing to say. Seeing the Golden Trio fights is always heartbreaking to witness, but this is quite possibly their worst argument in the entire franchise. Ron leaves Harry and Hermione behind, going off by himself for weeks.

3 Ron Believes Everyone Will Always Love Harry More Than Him

Ron lives a lot of his life, especially at Hogwarts, in Harry’s shadow. For the most part, he does not complain, but there are a few moments in the series when it gets to him. The Horcrux locket sees this as one of his biggest fears, that everyone will always love Harry more than him. Therefore, this fear manifests as Hermione choosing to be with Harry instead of Ron.

Initially, this catches Ron off guard, but in the end, he fights against this fear and manages to destroy the locket. This doesn’t make the idea that he feels less important than Harry any less heartbreaking, though.

The romantic feelings between Hermione and Ron begin to become more and more obvious during the final two years. In Harry Potter and the Deathly Hallows: Part One, the trio is captured by Death Eaters and Hermione is tortured by Bellatrix Lestrange.

While seeing Hermione screaming in pain is one of the most harrowing moments of the series, seeing Ron’s reaction to her pain is also very sad. It is clear how much Ron cares for Hermione and being unable to help her, as he is locked in a dungeon, causes him immense stress.

The Weasley family is an incredibly close unit, especially between the youngest four siblings, Fred, George, Ron, and Ginny. Therefore, Fred’s death is one of the most heartbreaking moments in the entire Harry Potter series.

Seeing Ron at his most vulnerable and experiencing such a harrowing moment is a lot for fans and his friends to witness. Surrounded by his equally heartbroken family, Ron cries and cradles Fred’s body. This moment highlights just how much everyone has sacrificed to help Harry and the Wizarding World triumph over evil.

NEXT: Every Harry Potter Horcrux, Ranked In The Order They Were Destroyed