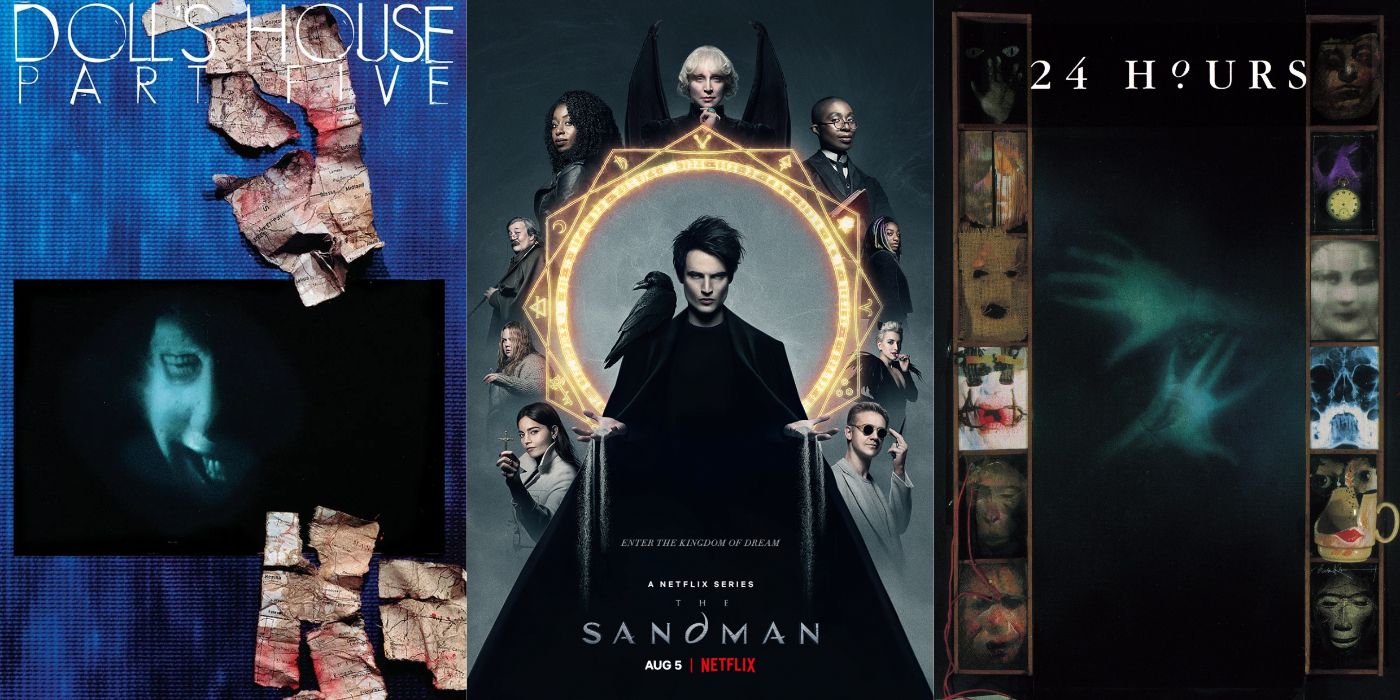 The Sandman’s Netflix adaptation comes after years of stops and starts with the property. For over thirty years, the comic has been a perennial favorite of readers and critics alike. It’s been lauded in every way possible, and the show will surely bring more eyes to the comics.

First-time readers are going to discover just how different the comic is, but they’re also going to discover something else. Simply put, the comics do a lot better than the show did. The show is great, both as an adaptation and as a viewing experience for a new fan, but the comic is a masterpiece. It’s better in many ways.

10 The Comics Have Better Atmosphere

One thing that is easily forgotten about the early days of The Sandman is that it’s a horror comic. It would morph into something completely different as the years went on, but it originally played off the success of Alan Moore’s Swamp Thing. It was intelligent horror; as such, the art, by artists Sam Keith and Mike Dringenberg, along with inker Malcolm Jones III and colorist Robbie Busch, fit the tone.

The art team on the book gave the comics the right atmosphere. It’s one of many ways comic horror can work better than live-action horror. The show suffers from the fact that it’s real, or CG made to look real, so there’s really not much of a horror atmosphere. In fact, the show never really feels like there’s any horror to it.

9 John Dee Was Better In The Comics

Not to take anything away from David Thewlis’s brilliant performance as John Dee, but the Dee in the comics was a much better villain. The show’s John Dee is a man molded by lies who wants to fix the world, but his idea of fixing the world is causing widespread destruction, as evidenced by the news reports in “24/7”. It doesn’t fit his motivation at all.

The John Dee in the comics is the former Doctor Destiny, a Justice League villain. He wants to cause as much chaos and pain as possible, orchestrating it like a monstrous god. He works better as a villain because there’s nothing to sympathize with.

8 The Pacing Is Better In The Comic

In the comic, Preludes And Nocturnes and The Doll’s House, the two stories adapted in the show’s first season are sixteen issues, eight a piece. The pacing in each story is just right, with each chapter getting across exactly what it needed to without feeling too rushed or too bloated. The same can’t be said for the show.

RELATED: 10 Worst Things Dream Has Done In The Sandman Comics

For example, “The Sleep Of The Just” is too loaded with events from the early years of Dream’s captivity but skips over things the comic doesn’t. “The Sound Of Her Wings” is amazing, but combining it with “Men Of Good Fortune” destroys how important it is on its own. The Doll’s House adapting episodes all feel rushed in a way the comic never did.

The Sandman comics do some amazing world-building. Gaiman and the many artists he worked with created amazing characters and vistas that drew the reader in. The show does a pretty good job of this, but it leaves out a lot of characters who would make the world-building work all the better.

While the show hits the major characters, there are some great minor characters that the show skips over or consolidates. It’s truly amazing how much world-building Gaiman was able to do in the first two storylines, which were very busy. The show does a commendable job, but it can’t really match the comic.

The Sandman is considered the pinnacle of the comic medium by many. Neil Gaiman’s prose is a key part of this. One area in which comics will always better than TV or movies is that they can put readers into the characters’ heads. A good writer can give the reader multiple points of view in a single panel, investing each with an individual voice.

On top of that, the way a writer writes is also important, giving the whole thing a unique style. Gaiman is a master of all this. His comic captions really put readers in the panel in a way the show can’t. His voice gives the whole thing a feel that the show just doesn’t have.

Reading The Sandman before watching the show is a great idea for many reasons. That said, it’s also going to ruin some parts of the show. A perfect example of this is the Dream Vortex scene. In the show, the dream scenes of Rose’s housemates don’t compare to the comic in general, but the Vortex scene is way too on the nose, as it’s just a literal vortex pulling everyone in.

The Sandman #15 presents the vortex in a very different way. Mike Dringenberg’s pencils, Malcolm Jones III’s inks, and Robbie Busch’s colors combine to create a hallucinogenic scene that will stick with readers forever. It’s beautiful and terrifying in a way the show’s scene just isn’t.

4 Desire And Despair Are Wasted In The Show

The Endless are a beloved aspect of The Sandman. While the Kirby Howell-Baptiste’s Death is wonderful, Desire and Despair ironically leave something to be desired. The actors playing them, Mason Alexander Park as Desire and Donna Preston as Despair, do a wonderful job portraying the characters, but they never feel important to the story.

It’s strange because Desire and Despair play the exact same roles in the show and the comic. The problem is their machinations never feel crucial to the story like they do in the comic. Part of this is the fact a very important part of The Doll’s House is left out of the show.

The Sandman is known for amazing one-off stories. An early example of this is The Sandman #9, titled “Tales In The Sand”. The issue tells the story of the doomed love affair between Dream and Nada, while heavily implying that Desire had something to do with the whole situation. It’s a brilliant early issue of the comic.

The show leaves it out. This is more than likely because the next thing the show is adapting is Season Of Mists, and that’s when it will be adapted. However, the absence of this crucial piece of The Doll’s House hurt the show.

Boyd Holbrook’s performance as the Corinthian is one of many great ones in the show, but the Corinthian is overused. He’s given a season villain arc that just doesn’t work for the character at all. In fact, the show bungles him and the Cereal Convention completely compared to the comic.

Having the Corinthian show up immediately in the show is a mistake the comic doesn’t make. It also builds to the Cereal Convention in a more organic way. It’s much more surprising in the comic and made all the better by Gaiman’s prose and Dringenberg, Jones III, and Busch’s art.

The Sandman contains brilliantly written horror. The Sandman #6, titled “24 Hours”, is a perfect example of that. Gaiman digs deep into the characters and peels away the layers, tearing through them with horrific abandon. The art by Dringenberg, Jones III, and Busch expertly captures the pain and torment, working with the prose to create a macabre masterpiece.

“24/7”, on the other hand, isn’t horror. It tries to be, but it’s pretty much just about sex, relationships, and how they affect people. It’s not a bad episode, but there’s nothing frightening about it at all. It’s a forgettable experience, whereas “24 Hours” is something a reader will never forget.

NEXT: 10 Things From The Sandman Comics Netflix Changed

What Is Rob McElhenney’s Net Worth? ‘Welcome To Wrexham’ Star Cashes In From TV...

Racism and the roots of conservative philanthropy in the US |...