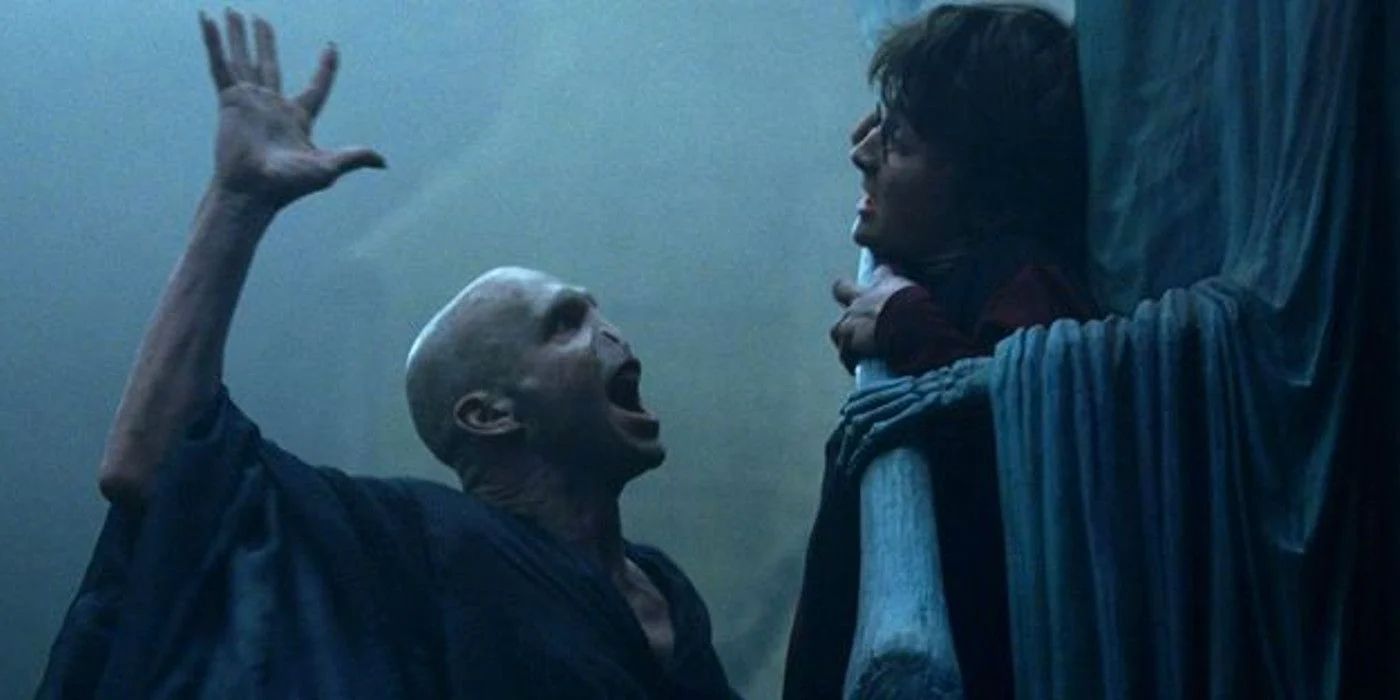 Since the first book’s release in 1997, the Harry Potter franchise has become one of the greatest media franchises in the world. The books changed the structure of young adult novels, and the film series became one of the highest-grossing in the world. This is thanks to the strong characters and story, which evolved with the audience from a fun wizard story to a complex understanding of death.

RELATED: How to Watch the ‘Harry Potter’ Movies in Order (Chronologically or by Release Date)

Regarding which medium gets this across better, the books trump the films. Along with being as long as the author wants and thus lacking time restraint, the films were produced while the books were still being written. Hence, directors and producers often cut material from early films that were important later on. This results in some confusing moments for film-only audiences.

Voldemort’s Knowledge of the Tri-Wizard Tournament

To regain his full strength and bypass the love magic protecting Harry (Daniel Radcliffe), Voldemort (Ralph Fiennes) prepares a long plan to kidnap Harry during the Tri-Wizard Tournament. But when you think about it, how could Voldemort have known that the tournament was being held? By this time, Voldemort’s spirit was hiding in Albania, waiting for a chance to return.

In the book, this chance came in the form of Peter Pettigrew, who, while looking for Voldemort, came upon a member of the Ministry of Magic named Bertha Jorkins. She wasn’t the brightest witch, so Pettigrew tricked her, captured her, and brought her to Voldemort. He then tortured her to death for information about the tournament and the location of Barty Crouch Jr.

Prisoner of Azkaban saw the entire wizarding world lose their minds when Sirius Black (Gary Oldman) became the first wizard to escape from their maximum security prison. In Goblet of Fire, Barty Crouch Jr. (David Tennant) became the second and found his master Voldemort. Using polyjuice potion, he took the form of Mad-Eye Moody (Brendan Gleeson) to infiltrate Hogwarts and ensure Harry Potter would win the Tri-Wizard Tournament and bring Voldemort back to full power.

Yet the film doesn’t explain how Crouch got out of Azkaban, nor do the characters seem to care, especially since he was believed dead. In the book, Couch’s dying mother used a polyjuice potion to swap places with her son while his father kept him hidden under the Imperius curse. This actually makes him the first person to escape from Azkaban.

Percy Weasley Against His Family

Percy Weasley (Chris Rankin) appeared several times in the early films as Ron’s (Rupert Grint) perfectionist older brother, but he wasn’t too bad a guy. However, when he appears in movie five, he’s suddenly loyal to Cornelius Fudge (Robert Hardy) in taking down Harry and Dumbledore (Michael Gambon). Then in movie eight, he can be seen in the background with his family fighting Voldemort.

RELATED: ‘Harry Potter’: 9 Times The Weasley’s Made Us Love Them Even More

Percy’s story was cut entirely from the movie, which saw him get good positions within the Ministry of Magic, eventually becoming Fudge’s assistant. This drove a wedge between his family when he sided with Fudge in saying that Voldemort had not returned. He did make amends before the battle of Hogwarts and tragically was with Fred when he was killed.

After Umbridge (Imelda Staunton) captured Harry when he was trying to talk to Sirius Black, she calls in Snape for some Veritasium truth serum. Fortunately, he explains that he has no more to give her and turns to go. As he does, Harry sends tells him that “he has Padfoot at the place where it’s hidden,” which is meant to warn him about Sirius and the Ministry of Magic.

RELATED: How the Adaptation of ‘Harry Potter and Order of the Phoenix’ Succeeded Where the Book Failed

Except this only works if you know who Padfoot is. Moviegoers would only know the name as one of the four creators of the Marauder’s Map. The names reference Sirius, Lupin, James, and Peter, with Padfoot referencing Sirius’ animagus form of a dog.

The Centaurs Hatred of Wizards

A centaur named Firenze first appeared in The Philosopher’s Stone to rescue Harry from Quirrell (Ian Hart) and warn him about the danger in Hogwarts. An entire herd later appeared in the fifth, though they are more aggressive to the characters than Firenze. Hagrid alludes to the Ministry of Magic restricting their territory, but this is just the tip of the iceberg.

The books go into great detail about how the centaurs are seen as sub-human by the wizarding community, even though their culture and intelligence are on par with humans. Firenze being willing to help Harry, is seen as an anomaly among his people, who would rather harass or even kill humans in their territory. While at first, they refuse to kill children, by book five, they had gotten so aggressive that they considered turning on Harry and Hermione (Emma Watson) before Grawp showed up.

Trelawney’s Voice In The Prophecy

Introduced in The Prisoner of Azkaban, Professor Trelawney (Emma Thompson) is Hogwart’s divination teacher, though her gift for prophecy is rather lacking. Yet when Harry goes to recover his prophecy from the Ministry of Magic in the fifth film, Trelawney’s voice emerges. She also appears in a flashback in movie eight when Harry looks into Snape’s memory.

In the books, Trelawney made Harry’s prophecy during an interview with Dumbledore, and Snape listened in and reported half of it to Voldemort. Dumbledore then hired her on as a teacher, but unfortunately, she can’t control when her predictions happen. Still, it could have led to a funny scene of Harry realizing the importance of his eccentric teacher.

Audiences cheered when Fred and George Weasley (James and Oliver Phelps) made their triumphant departure from Hogwarts in the fifth film. Then in Half-Blood Prince, we find them as entrepreneurs opening the Weasley’s Wizard Wheezers joke shop. However, this is the same film that shows Diagon Alley in squalor thanks to Death Eater activity, so one has to wonder where two drop-outs got the funding for such a venture.

The seeds of the joke shop were planted back in the fourth book when Fred and George bet on Ireland winning the Quiddich World Cup. Unfortunately, the guy they bet against cheated them, so Harry gave them his winnings from the Tri-Wizard Tournament. Then in book six, Fred and George explain that people need to laugh more than ever, hence why their business is booming.

Re-build The Weasley House In The Same Spot

During The Half-Blood Prince, Harry spends some time at the Weasley house, informing members of the Order of the Phoenix about Draco Malfoy’s (Tom Felton) actions with the Vanishing Cabinet. The evening is ruined when a group of Death Eaters attack and separate everyone in the nearby fields. Though nobody is hurt, the house is destroyed.

This scene didn’t exist in the book and, frankly, doesn’t make any sense in the films. Voldemort has said many times that he wants to kill Harry personally, so why would the Death Eaters attack him? The Weasleys then rebuild the house in the same spot and keep using it as a safe house, even though it has been attacked and gets attacked again like it did in book seven.

Why is Harry Obsessed With a Mirror

During Deathly Hallows – Part 1, Harry is often seen staring into a shard of glass that he keeps in his sock. Sometimes he even sees Dumbledore’s eyes staring back at him. It’s revealed in Part 2 that the mirror is a two-way mirror from Sirius Black’s house that found its way to Dumbledore’s brother, Aberforth.

Except the audience has never seen this mirror before. It’s quite tragic in the book: Sirius gave it to Harry as a gift whenever he needed to talk to him, but Harry forgot about it after everything that happened with Umbridge. Harry smashed it in a fit of grief, which is why it was cracked.

Kreature, the house elf, is sworn to the house of Black, as his parents were before him. Unfortunately for him, his current owner, Sirius, is way more accepting of half-bloods and blood traitors, which the late Mrs. Black would have hated. He’d much rather serve Bellatrix Lestrange, the next of kin in the Black family.

So why does Kreature answer Harry’s questions in movie seven when he, Ron, and Hermione, and why hasn’t he gone to Bellatrix? In book six, Sirius Black left everything he owned to Harry, including Kreature, which meant he was bound by magic to obey any of Harry’s commands. Harry patched up relationships with Kreature when he realized Sirius treated him poorly and gave him the fake locket as a token of friendship.