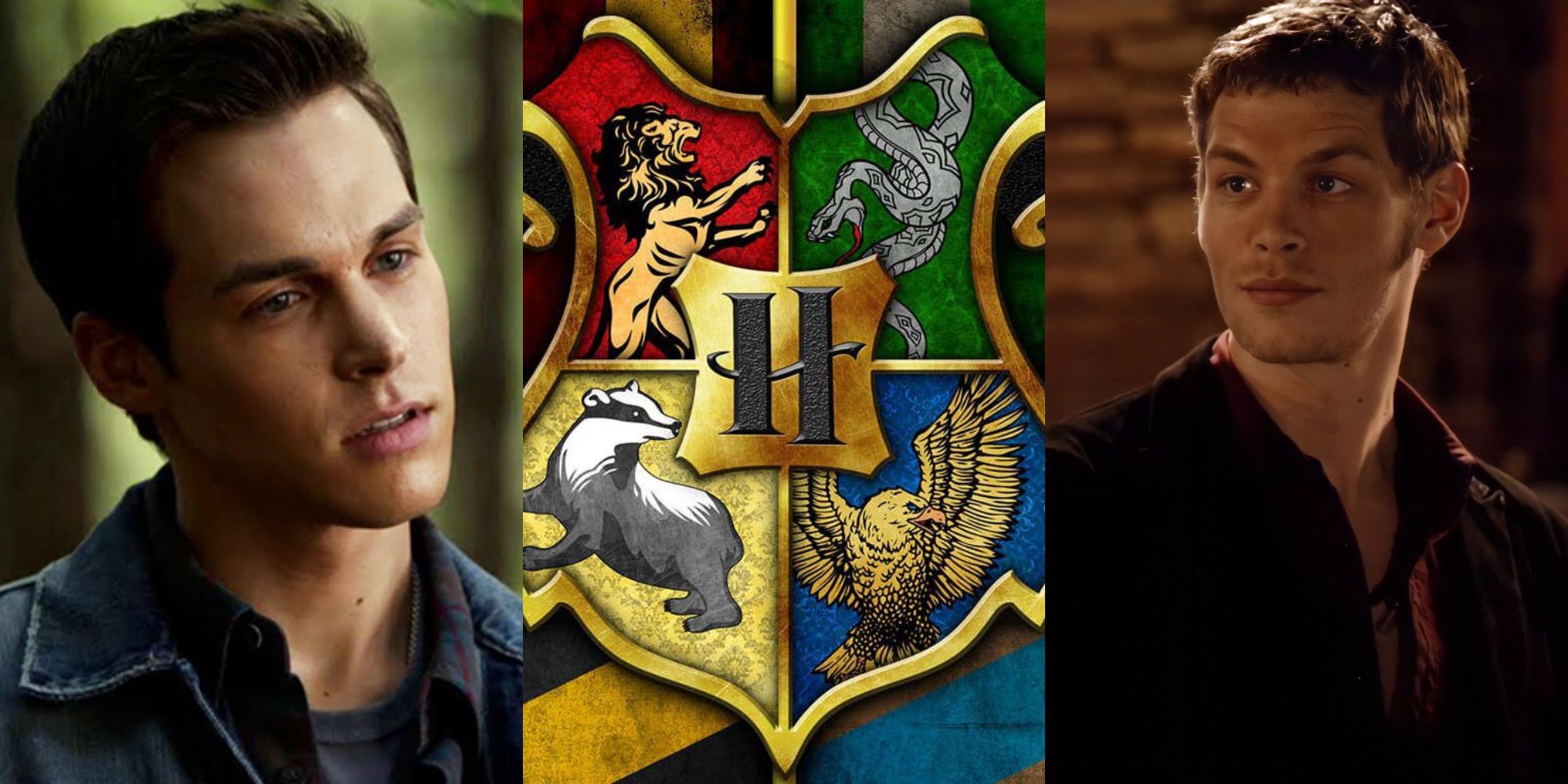 After 4 years, Klaus Mikaleson (Joseph Morgan) came back to screens in the Legacies season finale in June 2022. He was a villain within The Vampire Diaries and a recurring character that always provided lots of humor and interesting plot advancements.

While Klaus was well-loved, there were many other villains across the show that were fan favorites. Each villain had their own unique personalities and characteristics that shine through and, in a crossover universe with Harry Potter, would have made some interesting Hogwarts students, but which houses would they have been in?

Katherine Pierce (Nina Dobrev) was one of Elena’s doppelgangers that appeared throughout the entirety of the show’s eight seasons. She was a love interest to both Stefan (Paul Wesley) and Damon (Ian Somerhalder) and had many plans, which included destroying the town of Mystic Falls.

Related: 10 Ways Katherine Changed From Season 1 To Her Last Episode in Vampire Diaries

Katherine was a cunning and manipulative person with an immense ambition to find her daughter. She was determined to destroy the town that gave her a lot of pain using the resources available, from persuading citizens that they should follow her to using her previous attachments to the Salvatores to complete her plans. These place her into Slytherin.

A Professor at Whitmore College, Wes Maxfield (Rick Cosnett), dedicated his academic research to the study of supernatural creatures. While this was a normal occurrence, he later wanted to experiment on vampires – trying to rid the world of the species by having them turn on one another.

Wes Maxfield would be a Hufflepuff, similar to Newt Scamander from the Fantastic Beasts movies. Hufflepuffs have an ethic for hard work and patience, which would come hand in hand with the dedication to researching a mythical species. While he has some traits of Ravenclaw, such as his intelligence, his loyalty to his craft and the school push him to be sorted into Hufflepuff.

Being the husband of Qetsiyah and one of the first doppelgangers to Stefan Salvatore, Silas had one goal: Destroy The Other Side, where all supernatural creatures reside after death, and save his love, Amara (Nina Dobrev).

Related: The 10 Worst Things Silas Ever Did In The Vampire Diaries

Resourcefulness, cunningness, and determination are some traits demonstrated by the Slytherin house, all of which Silas has. He has to make do with what he has, being from 1st Century B.C.E and brought into the modern-day. His determination spanned across centuries, trying to escape as well as the cunningness to manipulate those around him into completing his goal.

One of the antagonists from Season 8, Sybil (Nathalie Kelley), was a siren known as the Amory monster who compelled Damon and Enzo (Michael Malarkey) into working for her, Tasked with bringing her sinners for her to stay young and immortal.

Sybil shows signs of a Hufflepuff but is ultimately better as a Slytherin. As a Hufflepuff, she shows loyalty towards Cade as his soul harvester; however, the classic traits of a Slytherin crop up more with her cunningness and ambition. Her manipulation of Damon and Enzo is a big one, with her using other people to do her bidding. However, she is also ambitious with her goal to be young forever, using the resources of sinners around her to achieve this.

Esther Mikaelson is the matriarch of the Mikaelson family and an accomplished witch. She had been the one to create the first Vampires, turning her children after the loss of one of her sons in order to keep them all safe. She is a brief antagonist in Season 3 of the show, responsible for opening a gateway to The Other Side.

While many of the powerful witches of the show could be easily placed into Ravenclaw, Esther can be easily sorted into Hufflepuff. The motivations behind the creation of vampirism were loyalty and dedication to her family, wanting them to be together forever. These are both traits of Hufflepuffs, along with Hard-work and friendliness, which is seen in flashbacks and in the spinoff, The Originals.

Considered one of the evilest villains of the show, Kai Parker was Season 6’s antagonist. He was a powerful warlock and siphoner who forcefully merged with his twin sister, Josette, after murdering his family and coven in order to be the leader of the Gemini Coven.

Related: 10 Kai Parker Quotes That Are Totally Meme-Worthy In The Vampire Diaries

Kai is a clear Slytherin. He is incredibly cunning, manipulating his family, friends, and foes into working for him. While he is clever, a trait of Ravenclaws, he is innovative, figuring out new ways in order to achieve his ambitions of being the dominant twin and leader of the coven.

As a final villain in Season 8, Arcadius was The Vampire Diaries’ embodiment of the Devil, nicknamed Cade. He had been someone who was treated badly in the past, so wanted to punish those with any dark secrets.

While the motivations of his punishments were questionable, Arcadius would be sorted into Hufflepuff. He has a friendly demeanor when not terrorizing the sinners and is hard-working to keep the world peaceful. He has a high dedication to his goals as well as a high tolerance for those who work for him, such as Sybil and her selfish actions.

Season 7’s antagonist, Rayna Cruz (Leslie-Anne Huff), was a vampire hunter who was a part of the Brotherhood of Five. This group was dedicated to trapping vampire’s souls into the Phoenix Stone, a powerful talisman.

Throughout her pursuit of Stefan, she was shown to be incredibly clever and sharp-minded, with her tactics into capturing him and those around him, as well as showing herself to be intelligent with her knowledge of the species from her adamant studies with the Brotherhood. These traits put her to be in Ravenclaw.

See also  ‘I had to grow up so quickly’: Olivia Cooke on auditions, ageing, and House of the Dragon | Game of Thrones

Klaus Mikaelson, one of the Originals and beloved antagonist turned ally throughout the show. His goals had been to break a curse concealing his werewolf bloodline as well as to create a hybrid army of vampires.

While many would argue that Klaus is a Slytherin, he has many traits that would put him into Gryffindor. Klaus is a courageous and brave man who sacrifices himself for his family while also helping to tackle dangers far bigger than himself. While he is a cunning, ambitious person, which are traits of Slytherin, he is confident in himself and his abilities as a hybrid vampire-werewolf, as well as his previous position as King of New Orleans.

Next: 10 Vampire Diaries Villains, Ranked By How Evil Their Plans Were


Next
Star Trek: 10 Best Uhura Quotes From The Original Series


Recently having completed a BA in Film Production and Screenwriting, Gueniver has a love for TV and Movies. During her free time, she writes prose screenplays, having been a Quarterfinalist in writing competitions. She has also spent time campaigning and raising money for LGBTQ+ charities during her time as LGBTQ+ President.

Idris Elba was ‘done with love’ before he met wife Sabrina

Ruben Randall - July 17, 2022 0
Celebrity
Idris Elba has revealed he had given up on love before he met his wife, Sabrina Dhowre Elba.The Luther star opened up about...