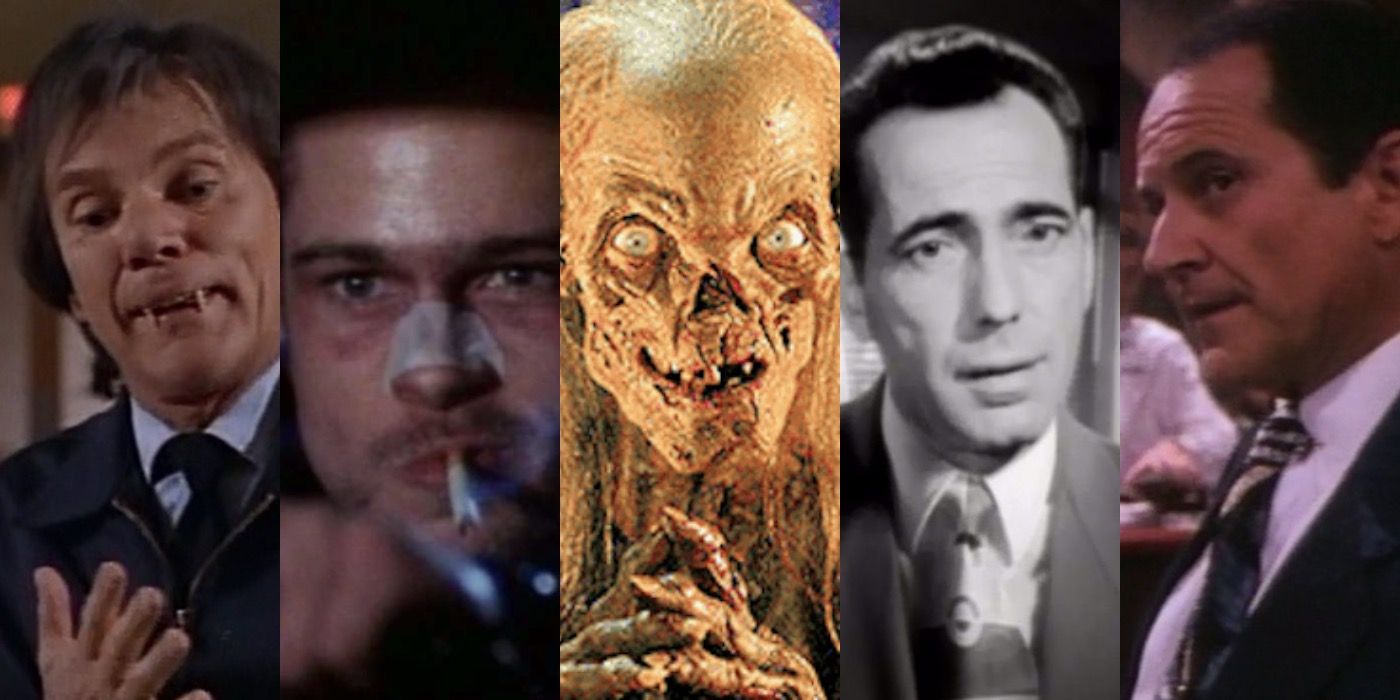 Based on the EC comic of the same name, Tales From the Crypt delivered a terrifying anthology tale with each weekly episode. Hosted by the venerable Crypt Keeper, the stories usually featured a character getting their comeuppance through supernatural means or an evil twist of fate.

Despite existing in the realm of horror, Tales From the Crypt never failed to pull in big-name stars to appear in their frightening fables. Whether it was Hollywood legends like Kirk Douglas or soon-to-be stars like Brad Pitt, the series was as star-studded as it was terrifying.

Shortly after his career-defining turn as Special Agent Dale Cooper on Twin Peaks, Kyle MacLachlan showed his range in the terror tale “Carrion Death”. The episode sees MacLachlan as a sadistic killer on the run from the cops toward the Mexican border. When a persistent cop stays on his trail, the killer has his hands full in more ways than one.

Harkening back to silent film classics like Greed, “Carrion Death” allows MacLachlan to shine as he spends most of the episode alone. Though known for his more affable parts, MacLachlan showed he was up to the challenge of playing a thoroughly unlikable character.

From the big screen as James Bond to the small screen as a self-proclaimed “werewolf hunter”, Timothy Dalton showed there wasn’t much he couldn’t do. “Werwolf Concerto” is the harrowing tale of rural hotel that is seemingly besieged by an onslaught of werewolf attacks. Fortunately, an expert in the subject is staying at the hotel and vows to help.

Though Dalton’s turn as Bond was underrated, he was still a large get for the series. With undertones of classic mystery stories, the episode manages to take a somewhat forgettable tale from the comics and pump it full of exciting new life, with a big star at the helm.

While most episodes of Tales From The Crypt are terrifying, they are usually also quite humorous in a darkly comic way. Screen legend Malcolm McDowell graced the series in the episode “The Reluctant Vampire” in which he plays a kind vampire who works nights at a blood bank in order to satiate his hunger for human blood.

Though most known for his terrifying turn in the Stanley Kubrick classic A Clockwork Orange, McDowell showed that he could do horror comedy as well. He manages to be a very likable character despite his vampirism and by the end of the episode, viewers are rooting for him to succeed.

Tim Curry has repeatedly shown throughout his career that he is capable of inhabiting any part that he is cast in. “Death of Some Salesman” follows a con-man who calls on a rural family in order to swindle them out of money while posing as a salesman. Unfortunately for the salesman, he soon learns that he knocked on the wrong door.

RELATED: 10 Roles Tim Curry Turned Down Or Was Rejected From

Amazingly, Tim Curry played all three members of the strange family and was able to give a stunning performance through thick makeup. His pliable abilities as an actor made him perfect for the roles and he had already had previous experience with heavily made up roles when he played Darkness in Legend.

When not making classic rock hits with his band The Who, Roger Daltrey had a surprising turn as an actor in films and television. “Forever Ambergris” follows a washed up news photographer who plots to get rid of his younger, and more talented competition when they are on assignment in South America.

Shedding his usual rock star charisma, Daltrey conveys the smarmy unlikable energy of his character to perfection. Though it is most known as one of the goriest episodes in the entire series, “Forever Ambergris” is still anchored by brilliant performances from its leads, particularly Daltrey himself.

Shortly before he would become an international sensation on the big screen, Brad Pitt starred in his own memorable episode of Tales From the Crypt. “King of the Road” follows a hot-rod racer who comes to a small town to goad the local Sheriff into having one last street race.

Helmed by legendary horror director Tom Holland, “King of the Road” is one of the most straightforward episodes of the show. Relying on the tension between the characters instead of gore and monsters, the episode shines through its strong performances. Pitt both looks and plays the part well and it is one of the most memorable highlights of his early career.

While Tales From the Crypt was resurrecting undead monsters on a seemingly weekly basis, they used one of their strangest episodes to resurrect a Hollywood legend. “You, Murderer” tells the story of a criminal who uses plastic surgery to make himself look like Humphrey Bogart. After becoming a successful businessman, he is hunted down by shady characters from his past.

The filmmakers used archival footage of the long deceased actor and clever camera work to have Bogart appear in the episode. Though a somewhat forgettable episode in the long run, the appearance of Bogart was enough to carry the viewer’s interest throughout.

Despite being one of the screen’s biggest stars at the time, Arnold Schwarzenegger not only appeared in an episode of Tales From the Crypt but directed the very same episode as well. In “The Switch”, an older man hopes to win the heart of a much younger woman and spends his entire fortune to have his body parts swapped with those of a much younger man.

Though he only appears in the opening scene with the Crypt Keeper, Arnold Schwarzenegger’s cameo is enough to elevate an already memorable episode. Schwarzenegger showed his penchant for direction when joining the likes of other notable Tales directors like Robert Zemeckis and Richard Donner who directed some of the most memorable films of the 1980s.

Though a celebrated star of the big screen, Joe Pesci’s turn on Tales From the Crypt was one of his few televisions appearances. “Split Personality” tells the story of a con-man who begins dating a pair of twins in order to steal their large inherited fortune.

Most known for his gangster roles in some of Martin Scorsese’s greatest films, Pesci was in his element as the smooth talking swindler. Though not a big stretch for the actor, his appearance is an example of excellent casting and the overwhelming star power that the series could call in during its heyday.

By the 1990s, Hollywood legend Kirk Douglas had done it all and his children were already years into successful acting careers as well. “Yellow” was a deviation from the usual pre-code horror comic formula, and pulled its story from an EC war comic from the same era. The story follows a soldier during WWI who is accused of cowardice and put on trial by the general who is also his father.

Though it wasn’t a horror story per se, “Yellow” still managed to be one of the tensest episodes of the entire series. With Kirk Douglas on board to anchor the episode, he stars in a story that is reminiscent of the Stanley Kubrick film Paths of Glory which he also starred in. Feeling more like a short film than an episode of a TV show, “Yellow” stands head and shoulders above the rest of the series and Kirk Douglas is a big reason for that.

NEXT: 10 Episodes Of Tales From The Crypt That Still Scare Us Today


Dalton is a freelance writer and novelist from Orlando Florida. He currently lives in Los Angeles and pursues writing full time. He is an avid reader and film buff.

Ruben Randall - March 30, 2022 0
Actress
Tributes have poured in for Sopranos actor Paul Herman after he died, aged 76.Herman’s death was confirmed by Michael Imperioli who starred with him...

‘The Bear’ Questions Everything Restaurants—And Men—Are About