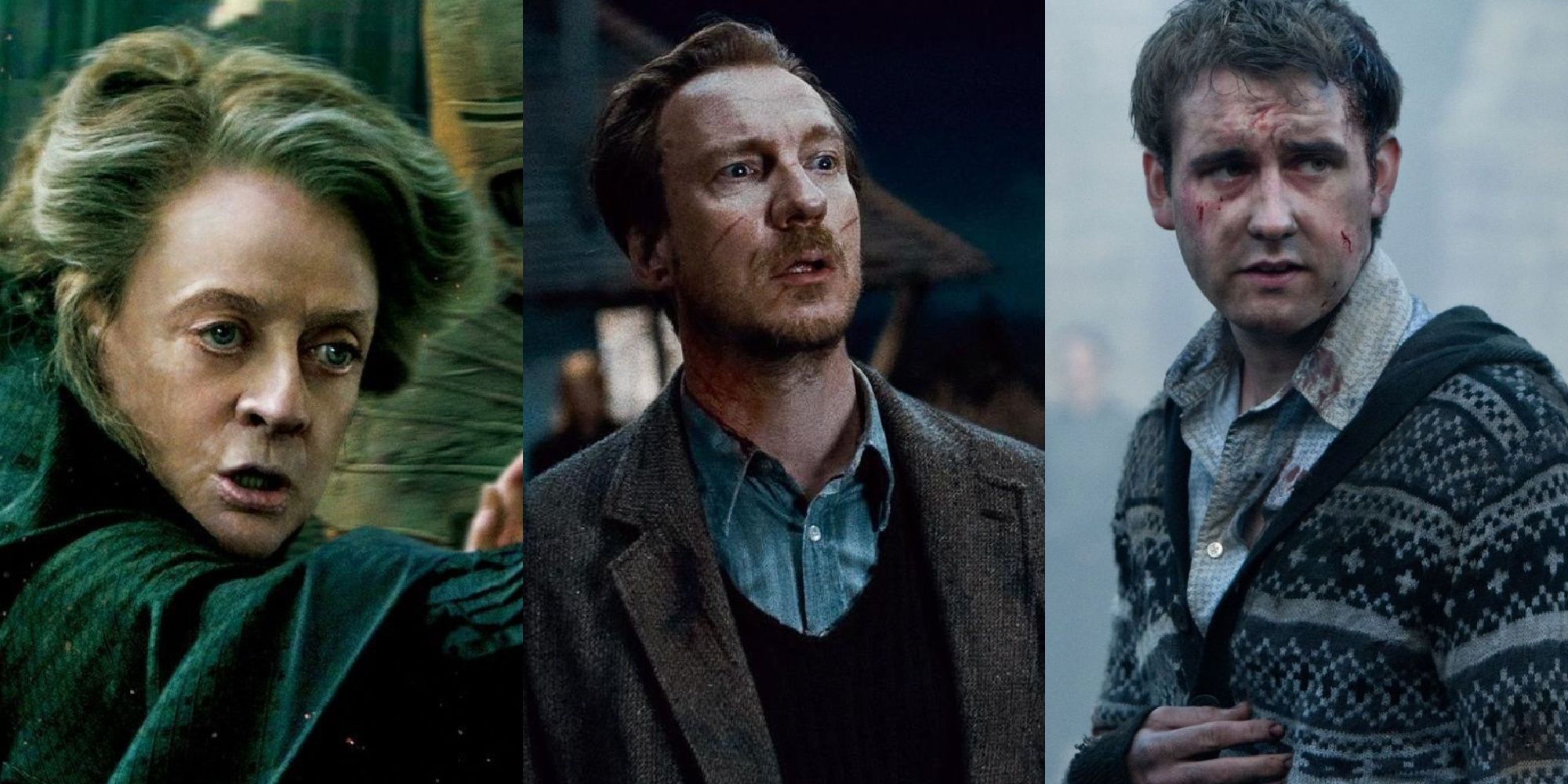 In the Fantastic Beasts And Where To Find Them series of films, long-time fans of Harry Potter are given an inside look at Albus Dumbledore’s backstory. They get to see a young Dumbledore spring into action, teaching at Hogwarts, and even having complicated relationships with other characters, like Grindelwald.

RELATED: 10 RPGs That Were Critically-Panned But Popular

For fans of the franchise, it’s been great to see a familiar face and learn more about his life. But, Dumbledore is not the only interesting character from the Harry Potter books and movies, and there are quite a few others that fans would love to see in their own spin-off films.

Neville may have started his Harry Potter journey as a nervous student who almost tattled on Harry, Ron, and Hermoine as they snuck out, but he transitioned into a force to be reckoned with. By the end of the series, Neville was one of the bravest fighters in the school and smart enough to become a Hogwarts professor, himself.

After the war, Neville became an Auror for a period of time, and those adventures would make for a great film, especially if he worked alongside Harry, who also worked as an Auror. Neville eventually started teaching Herbology at Hogwarts, and fans could get the perspective of a teacher at the school.

Bill Weasley barely got any screen time in the actual Harry Potter films, but he would make an amazing main character in his own feature film. Bill was the oldest of the Weasley family and spent time in Egypt working as a Curse Breaker for Gringott’s.

He’s one of the few people to survive a werewolf attack at the hands of Fenrir Greyback, proving that there’s something special and strong about him. He was also getting married to Fleur Delacour during a war, which is a beautifully tragic love story.

McGonagall has long been a fan-favorite professor, most likely for her sometimes sassy demeanor and expert skill as a duelist during battle. Even after teaching at the school for several decades, she still sprang into action to defend Hogwarts and its students.

McGonagall was also Headmistress after Dumbledore, and it would be interesting to see her as Headmistress and compare and contrast her decisions with the school.

Fans get short glimpses of Harry’s father’s days at Hogwarts with his friends, but from what Harry learned, James and the other Marauders were fearless troublemakers who had a blast at Hogwarts and eventually became fiercely talented wizards.

RELATED: 10 Times Harry Potter Ignored Its Own Logic, According To Ranker

Although Peter ended up on the wrong side of Wizard history, the other Marauders fought against Voldemort during his first attempt at taking over the Wizarding World and were integral in his defeat. They also were there for the creation of the Order of the Phoenix.

Luna is most well-known for being unapologetically herself. She is one of the strangest people Harry meets on his journey, but she’s also the kindest and most pure-hearted. She’s a Ravenclaw, proving that she’s intelligent and loves to learn.

Her story even has a connection to the Fantastic Beasts films, as she becomes a Magizoologist after the war and eventually meets and marries Rolf Scamander, Newt Scamander’s grandson. Potentially seeing Newt again could be an interesting callback to the films.

Nymphadora Tonks is a Metamorphmagus, meaning that her appearance can change whenever she wants it to. Knowing the fiery spirit that Tonks has, there’s no doubt that she used her abilities for many fun shenanigans during her time as a Hufflepuff at Hogwarts.

She was mentored by Alastor Moody when becoming an Auror, which would give fans more backstory about Moody, whose strong sense of humor and expertise was only briefly seen in the series. Lastly, Tonks’s love story with Lupin was passionate and heartbreaking–perfect for a film.

See also  9 Characters Who Barely Changed Since The Beginning

While Snape is a controversial character, with some fans not believing that he should be shown any sympathy, other fans think that Snape is actually a hero within Harry’s story. If anything, a film about Snape’s story would highlight what it was like to be a double agent during the war.

There are short segments where fans see into Voldemort’s inner circle, but a more in-depth look at how difficult Snape’s journey was would be very interesting. Fans would also get more of the Lily Evans and Snape backstory, which has much room to be fleshed out further onscreen.

Cedric lived entirely within the Wizarding World, which is something that audiences didn’t get to see when following Harry. From what is shared by Cedric and his father, they were a very worldly and talented wizard family.

RELATED: The 10 Best Harry Potter Video Games, According To Ranker

Cedric was well-liked by teachers and classmates, even becoming a prefect at Hogwarts. In an alternate timeline that could be explored in a film, Albus Potter and Scorpius Malfoy–Harry’s and Draco’s sons–reverse Cedric’s death only for him to become a Death Eater, which would be great to see in a film.

Draco Malfoy may have been an antagonist in the Harry Potter films, but he was one of the least evil antagonists Harry faced. When push came to shove, Malfoy couldn’t commit to being a bad person. At his core, he was just a scared kid with bad influences.

It would be amazing for fans to get to see how Malfoy’s childhood and role in the Second Wizard War affect him later on in life. He marries a witch named Astoria Greengrass and has a son, Scorpius, which would humanize Malfoy and give him his own love interest.

Hermoine Granger is one of the most well-rounded characters of the series besides Harry–if not more so. She has an interesting upbringing because she was raised by two muggles before discovering that she was a witch, and it would be very entertaining to see her discover her magic onscreen.

She is smarter than most, she can fight against Death Eaters and be evenly matched, and she had a dynamic and intriguing love story with her lifelong friend, Ron. She went on to become an activist for the treatment of elves and worked to eradicate laws in favor of pure-blooded wizards and witches.