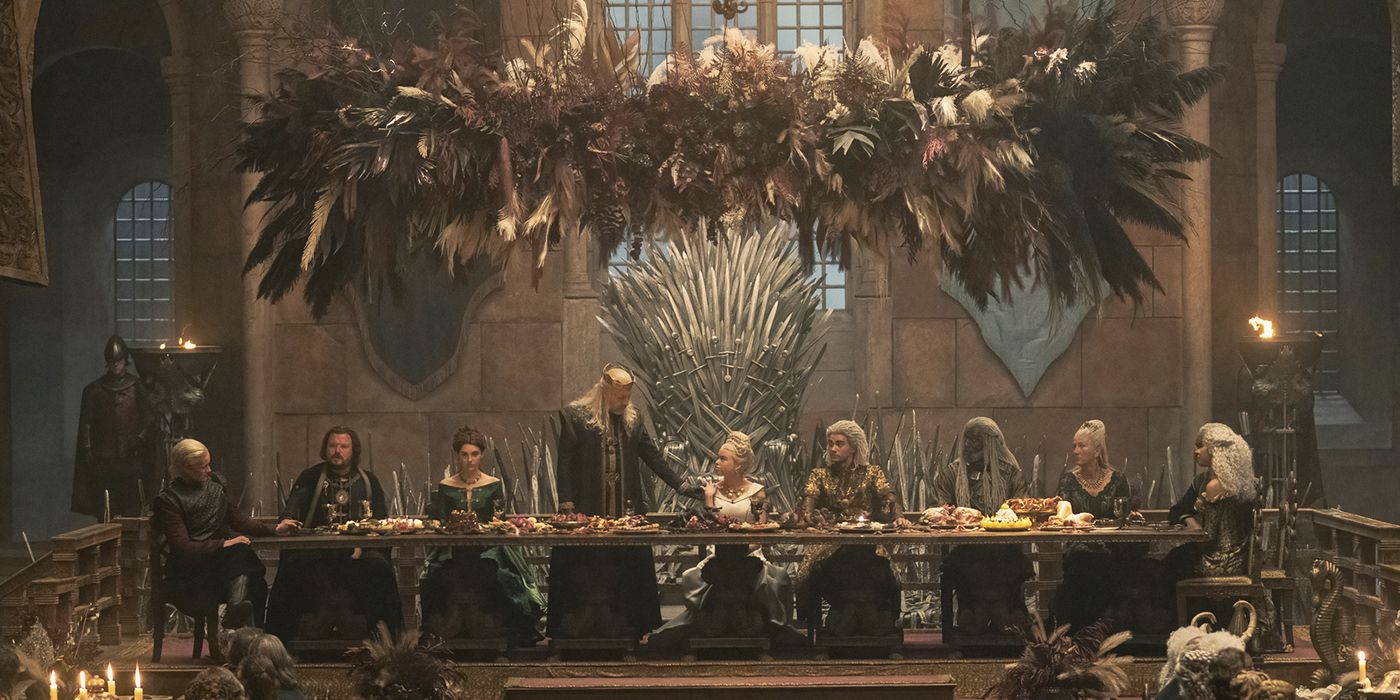 In today’s entertainment industry, everything is a franchise. Every movie or TV show is ripe for sequels, spin-offs, and, perhaps the hardest to pull off, prequels. In the last few years, prequels have become all the rage, filling in the gaps in the stories we know and love.

What makes a prequel hard is that you have to tell a story in a way that justifies its existence. We already know how the story ends, so why are we going backward? In the history of prequels, several examples have not only justified their existence but also created great stories that may be better than the originals.

After the disappointing final season of Game of Thrones, it was unclear what the franchise’s future would be. If House of the Dragon is any indication, the future is brighter than ever.

RELATED:’House of the Dragon’ Brings Us Back to Westeros With Renewed Hope | Review

Set hundreds of years before Game of Thrones, this series follows the Targaryen family back when they were the royal family of Westeros. What makes the show work so well is that it focuses on the strengths of GoT. Whereas GoT arguably followed too many characters, HotD is centered on a core family, creating a deeper sense of character than was often possible in the original series. It also tells a more coherent story, honing in on the power struggle building over time. Time will tell if its legacy will match Game of Thrones, but House of the Dragon is making a real case for itself in its first season.

While Ti West‘s X took place in the 1970s and was an homage to the slasher movies of the time, Pearl has more in common with The Wizard of Oz than The Texas Chainsaw Massacre.

RELATED:’Pearl’ and 9 Other Great Horror Movie Prequels That Were Scarier Than Their Predecessors

The film is the origin story of the killer in X, following Pearl as she pursues her dream of being a star while battling the close-minded, repressed world of 1918 America. The movie is bright and colorful, with some of the most stunning cinematography you’ll ever see, capturing the essence of old Hollywood technicolor. Mia Goth’s performance as Pearl is a revelation. It’s genuinely Oscar-worthy, imbuing this tragic character with a deep desire for a better life than she has: it’s one of the year’s most disturbing, engaging, and brilliant movies.

The mystery of “Who killed Laura Palmer?” engrossed audiences throughout the first two seasons of Twin Peaks. The prequel movie Fire Walk With Me follows Laura Palmer in the days leading up to her death, asking the audience if her death was inevitable.

While the original TV show mixed the mystery and soap opera genres with touches of David Lynch‘s weirdness, Fire Walk With Me is full-on Lynch, feeling like a fever dream of anger and fear. Sheryl Lee‘s performance is incredible, finally giving life to one of television’s most famous dead characters. Like a good prequel, Fire Walk With Me doesn’t quite work as well if you haven’t seen the original, but its more stylized and striking story makes it a movie you cannot miss.

One Flew Over The Cuckoo’s Nest is a masterpiece. It was the second film ever to sweep the major categories at the Oscars. That’s quite a lot for Ryan Murphy‘s Ratched prequel to live up to. So, instead of competing, Murphy makes a prequel that’s so different from the movie it practically stands on its own.

Ratched feels more like American Horror Story than the original movie, and it surprisingly works. Serving as an origin story for the notorious Nurse Ratched, Sarah Paulsonplays the role with real humanity, separating her Ratched from Louise Fletcher‘s more intense villain. What makes this prequel stand out is how the show carves its own path instead of trying to live up to an impossible legacy.

Famously, the original pilot of Star Trek featured a slightly different crew than the one we saw in the final product. That pilot was retconned as having occurred before the show began in a two-part episode called “The Menagerie.” That history is now being fleshed out in the newest Star Trek series, Star Trek: Strange New Worlds.

The show follows the crew of the USS Enterprise, led by Captain Christopher Pike (Anson Mount). Along with new characters, there are also plenty of faces you’ll recognize from the original series, including Spock (Ethan Peck), Uhura (Celia Rose Gooding), and even a younger James T. Kirk (Paul Wesley). What makes the show so good is that it combines the best aspects of the two eras of Star Trek: the episodic structure of the older shows and the scope and scale of the Paramount+ series. It’s the show every Star Trek fan has been waiting for.

Most of the time, the Batman origin story is told in just a few minutes, and then we jump to the fully-formed vigilante. Gotham dives deep into how the young billionaire orphan became a crime-fighting machine while highlighting the rise of some of his greatest villains, including Catwoman, The Penguin, and The Riddler.

What makes Gotham incredible is that the story isn’t told just from Bruce Wayne’s perspective. It’s the story of the city itself, including villains and hero cop Jim Gordon (Ben McKenzie). Not taking a specific style from any Batman movie, Gotham charts its own course and becomes one of the definitive versions of the Batman myth.

Predator is an action/horror classic. The sequels? Not so much. That’s why it was so surprising that Prey, a prequel to the original, may be the best Predator movie to date.

Prey is one of those prequels that doesn’t try to connect too much to the original. While the original takes place in the modern era, Prey goes back to the year 1719 and follows a young Comanche warrior named Naru as she struggles to prove herself by protecting her people from the Predator. Amber Midthunder‘sperformance as Naru is what elevates Prey above Predator. We all love Arnold Schwarzenegger, but Naru is a real character that the audience can rally behind.

Alfred Hitchcock‘s Psycho is one of the most iconic horror movies ever. Everyone knows Norman Bates and his murderous motel. But on Bates Motel, we get to know Norman better than we ever had before.

The show tells the story of Norman and his mother, Norma, leading up to the original film’s events. Featuring incredible performances by Freddie Highmore and Vera Farmiga as the mother/son duo, the show dives deep into how Norman becomes the psychopath he’s destined to become. You may think that a serial killer is a tough protagonist for a TV show, but much like the original movie, the show pulls it off, humanizing Norman and Norma to the point that you even understand why they do what they do. The best prequels justify their existence by adding new layers to the original, and that’s what Bates Motel does.

Taylor Sheridan’s Yellowstone is one of the most popular shows on TV, with the season four finale drawing 9.34 million viewers. While the show has connected with a large audience, its prequel series 1883 takes what works in the neo-western series and tells a more ambitious story of the Wild West.

While Yellowstone is a mix between Dallas,The Sopranos, and Succession, 1883 is a full-blown western, following the post-Civil War generation of the Dutton family as they travel west to establish the Yellowstone ranch. 1883 swaps out the melodrama and soap opera storylines from Yellowstone with a serious, well-crafted story about the struggles that must be endured when looking for a better life. Yellowstone may be more popular, but 1883 is the best western show on TV.

Breaking Bad is considered one of, if not the greatest, TV shows of all time. Once it ended, it was hard to believe that another show would top it anytime soon. Then came Better Call Saul. The show takes place years before Breaking Bad and shows how con-man lawyer Saul Goodman, aka Jimmy McGill, came to be involved with the criminal underworld of New Mexico.

You may think that it’s just going to be Breaking Bad again, following Jimmy as he descends into evil, but it’s really not. It’s a nuanced exploration of the gray areas of morality with an incredible lead performance by Bob Odenkirk. It feels like Better Call Saul is a logical progression of the themes of Breaking Bad, without the growing pains of a brand new show and with the artistic freedom of an experienced team of creatives.

KEEP READING: Every ‘Game of Thrones’ Spinoff Series in Development or Cancelled

Ruben Randall - October 10, 2022 0
TV/Movies
How many companies that have done work for Donald Trump’s businesses have been stiffed? According to articles by “USA Today,” “The Week,” “The Hill,”...