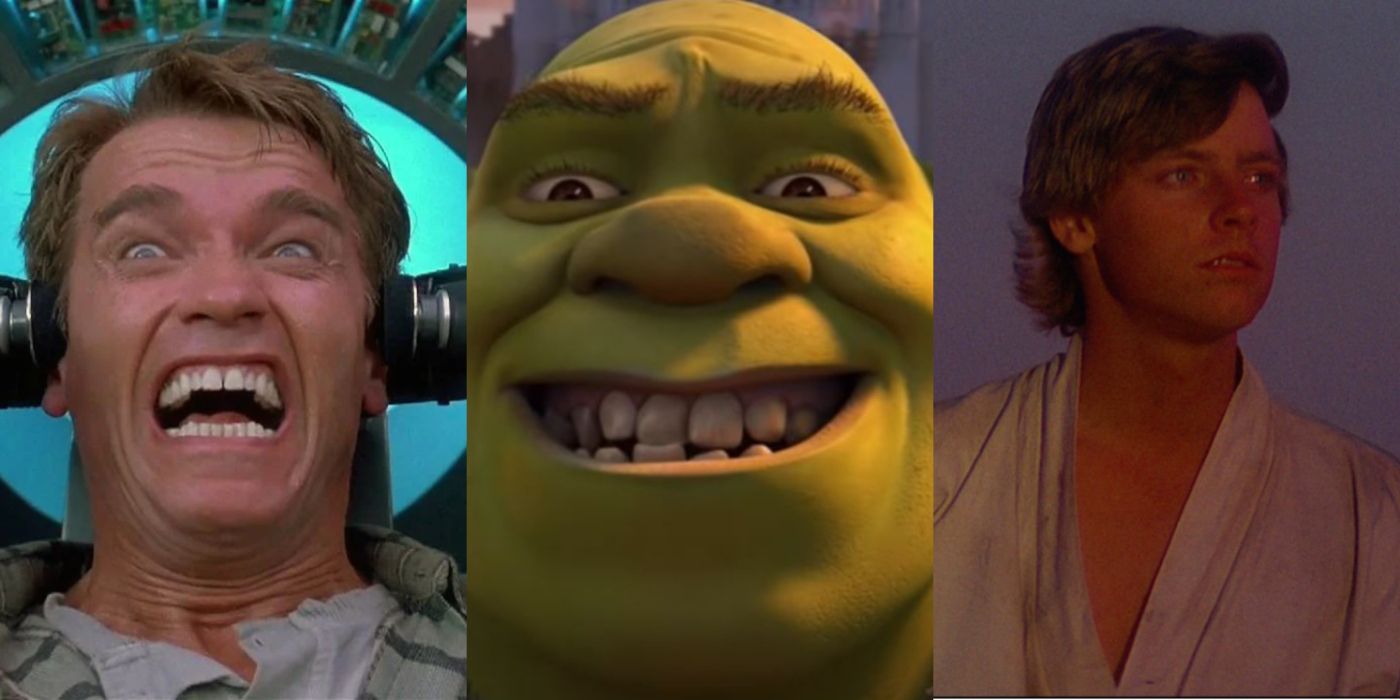 It’s not easy coming up with an idea for a film. It must be creative, original, and something people want to see. Many peculiar people in Hollywood have some of the most creative minds ever. When those people come together, they conceive some of the most bizarre film plots possible in an attempt to fill the seats at the theaters.

While it obviously doesn’t always work out that way, some of these wacky ideas become some of the greatest movies ever made. Of course, there are many ways to judge a film’s success: box office earnings, critics’ reviews, and word of mouth. But, no matter how the movie’s success is judged, there’s no doubt that some really absurd ideas end up doing very well.

10 Nobody Is Saying Nope To Nope

Jordan Peele’s latest film Nope is yet another smashing success for the latter half of the Key and Peele duo. It’s hard to say much about the plot without spoiling the film, as Peele has a way of giving very little in terms of the plot until the story develops onscreen. What is known is that there might be extraterrestrials, and a horse ranch tied to cinema history.

One thing’s for sure; people are willing to come to the theater to see what absurd, commentary-laden horror the people of Peele’s world will go through next, as the film raked in $44 million in its opening weekend. They might not look at clouds the same way ever again.

9 Donnie Darko Is Essentially About An Evil Bunny

Who could possibly conceive the idea that a man is haunted by an evil bunny that manipulates him to commit crimes? That’s something right out of a nightmare. Half of the movie is just a man in a giant bunny suit creepily staring at Donnie Darko (Jake Gyllenhaal).

RELATED: 5 Psychological Thrillers That Reinvented The Genre (& 5 That Didn’t)

This is apparently very appealing to moviegoers, though. Donnie Darko has an 86% on Rotten Tomatoes, and was met with tons of positive feedback from critics and audiences alike. Years after its release, director Richard Kelly has said that there is work being done on a sequel. Just don’t look at the sequel that already exists.

Arnold Schwarzenegger has been part of plenty of wacky films throughout his career, but none may be more bizarre than Paul Verhoeven’s Total Recall. The film is about a man with a chip implanted in his brain that replaces all of his memories with those of another, more ordinary life. It turns out that he was actually a secret agent from Mars looking to take down the Martian dictatorship.

As mind-boggling as that sounds, the movie faired pretty well. It earned over $261 million at the box office and even won an Oscar for Best Visual Effects in 1991.

Shrek is merely a modern-day version of the fairytales mixed into one. Still, it’s worth taking a second to acknowledge how ridiculous some old fairytales are. For example, Pinocchio is a wooden boy brought to life by an adult man; a little blonde girl robs three bears; and a giant wolf that eats an older woman and then dresses up like her to trick her granddaughter. In this movie, they all live in a swamp along with Shrek, a giant green ogre.

As crazy as that all sounds, Shrek went on to become a cult classic. It made $487 million at the box office, won Best Animated Feature at the Oscars in 2002, and got three sequels.

It’s hard to gauge the success of a low-budget film, but it did pretty well for a movie that was made on $50,000 and was filmed in five nights. Coherence is as bizarre as they come as it’s about a group of friends who are together for a dinner party, but as a comet flies over the house, their reality begins to merge with others.

RELATED: 10 Ways Doctor Strange In The Multiverse Of Madness Holds Up Better On A Rewatch

While it hasn’t gotten much mainstream attention, the film still holds a solid 88% on Rotten Tomatoes and turned a profit, so it’s safe to say Coherence was a success in every reality.

5 A24 Strikes Gold With The Green Knight

Many A24 films have bizarre plots, and it’s no doubt that The Green Knight is one of them. The film, directed by David Lowery, is a spoof of King Arthur, this time revolving around his nephew Sir Gawain (Dev Patel). The story follows Gawain as he beheads a giant tree knight and then seeks him out to prevent him from matching the blow.

It’s hard to imagine how beheading a tree even works, but Lowery makes it a reality in one of the trippiest films to come out in the last year. The Green Knight certainly found its stride with a strong 89% on Rotten Tomatoes.

4 Ghostbusters Is As Zany As It Is Loved

Four scientists open up a business fighting ghosts in New York City with tricked-out vacuums, and square off against giant evil marshmallow. Yeah, that’s one bizarre movie plot. It only went on to become one of the all-time classics.

Ghostbusters became the highest-grossing comedy at the time, earning two Oscar nominations, two sequels, and a spinoff in 2016 that many would rather forget. Becoming an instant cult classic, it’s hard not to revisit this film around Halloween.

3 The First Rule About Fight Club

You don’t talk about Fight Club, except that’s exactly what everyone did after this came out in 1999. The movie is about two men who start underground fight clubs to channel their aggression, but as the film goes on, things get weirder and weirder. It ends up making it one of the most bizarre movies fans have ever seen, which is partly why it’s so beloved.

RELATED: 10 Directors And Their Best Film, According To IMDb

The film has a surprising 79% on Rotten Tomatoes, an extraordinary 96% from audiences, an Oscar nomination, and universal acclaim. Fight Club is a movie that’s studied in film classes worldwide, and continues to see massive success to this day.

Just about any Pixar movie is a bizarre plot at heart, as Pixar has a knack for bringing random things to life. However, the first feature-length entry for the studio is incredibly wild, and very successful. A child’s toys come to life, and a power struggle ensues when a new toy joins the bedroom.

If it weren’t a film, that would be crazy talk. However, Toy Story was a groundbreaking film for animation and continues to be the bread and butter of Pixar to this day. With three sequels, three Oscar nominations, and millions made in merchandising for Disney, this is easily one of the most successful franchises of all time.

1 A Very Bizarre Film From A Galaxy Far, Far Away

In 1977, George Lucas released a film about a boy from a desert planet helping defeat a giant evil space empire using a big laser stick. While Star Wars has become an undoubtedly successful franchise with great stories, A New Hope was the first of its kind and certainly raised some eyebrows with its rather creative plot.

NEXT: 10 Cruelest Movie Villains Of All Time, Ranked

Ruben Randall - April 29, 2022 0
Money
On Monday, a New York Supreme Court judge held Donald Trump in contempt of court for failing to comply with a subpoena from New...