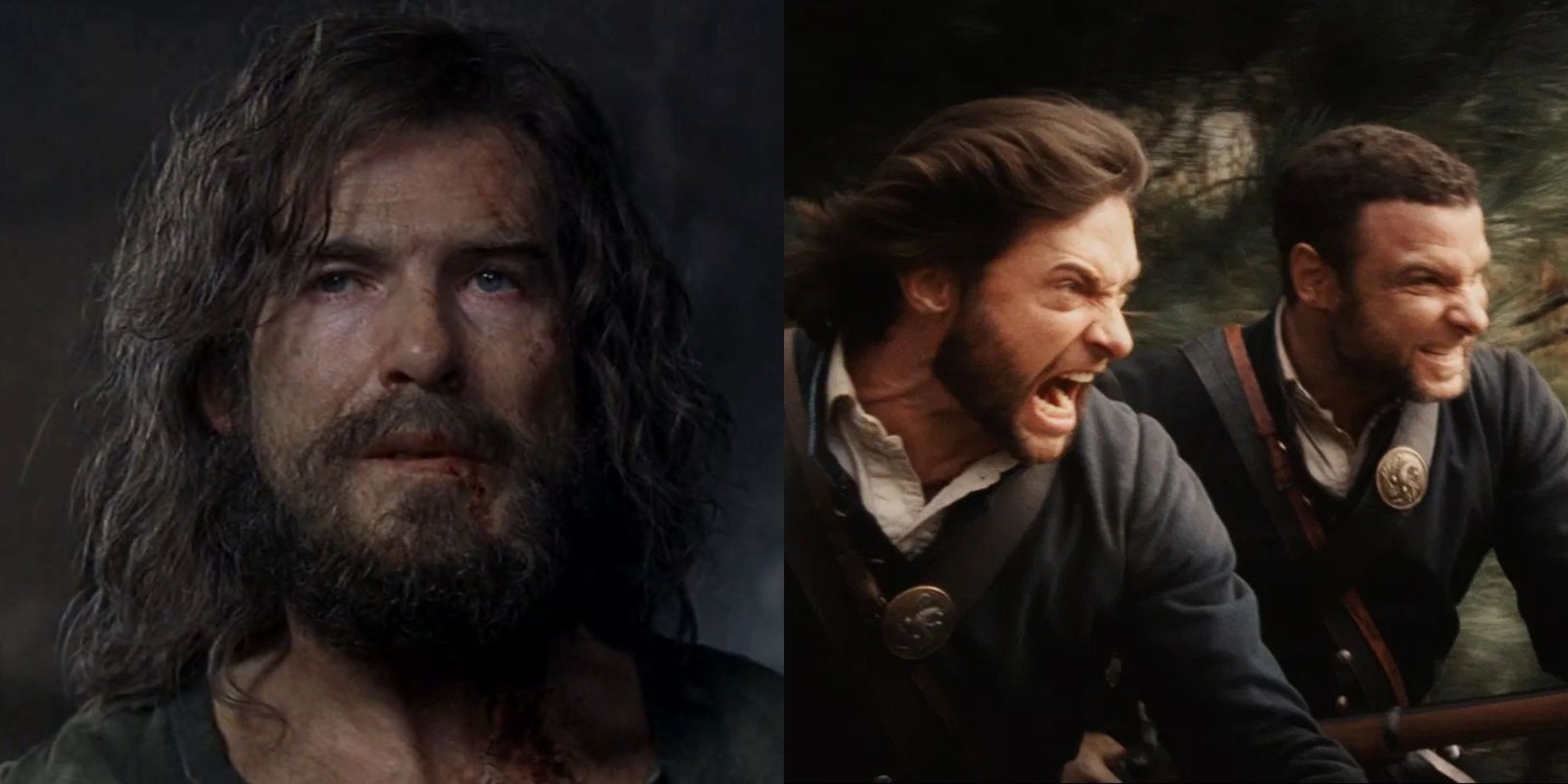 From Nope‘s gory beginning sequence to Top Gun: Maverick‘s nostalgic first scene, movie fans have been treated to some memorable openings this year. Although both of those movies managed to maintain the level of quality throughout, not every movie can make that claim.

Whilst some movies, including famously the James Bond series, often begin with huge action set-pieces that go so all-out that it’s impossible to meet that level again, some movies just disappoint because a solid opening gives way to a poor movie overall. These are the movies that Reddit believes peaked a little too early.

The enduring popularity of Hugh Jackman’s Wolverine means fans are excited about his potential return in Deadpool 3 but that doesn’t mean every movie involving the hero has been a classic. X-Men Origins: Wolverine initially delivered on its promise though with a stylish opening that showed how the hero got his trademark grit fighting in wars throughout history.

RELATED: The 10 Best Reddit Reactions To Wolverine Being In Deadpool 3

Redditor Panz04er agrees that it’s a “really cool opening credits scene” but comments that the “rest of the movie wasn’t very good.” With a plot that critics felt was bland and didn’t develop the character in any more interesting ways, the movie failed to live up to its bright start.

If any movie series is known for its spectacular opening sequences, it’s the 007 franchise. Whether it’s the cheesy, over-the-top openings of earlier movies or the tense, highly-choreographed action of the Daniel Craig era, there’s always something to get fans excited about what’s to come.

The Spy Who Loved Me is definitely an opening of the former kind, with an iconic action sequence that ends with Bond opening a Union Jack parachute as he descends from the mountain. To Redditor Chaoticcoco, it’s so iconic that “nothing tops that opening.” Even for those who enjoyed the rest of the movie, the enduring image is always of that extravagant beginning.

Though it didn’t fare particularly well at the box office, Dark City‘s uniquely paranoid sci-fi charms have led to it becoming a cult classic with a TV show reportedly in the works. The director’s cut immediately throws the viewer straight into its dark plot with its amnesiac protagonist, played by Rufus Sewell, waking up in a hotel bathtub and immediately forced to flee mysterious figures.

Redditor rockit5943 thinks that, while it is a “good movie overall,” its beginning is where the movie peaks because “it’s just so atmospheric and grimy.” This effect is only heightened by the fact it starts so suddenly, with the viewer left as clueless as the main character. Many have complimented the movie’s fascinating ideas but nowhere is it better-executed than the opening.

Though the idea of a supernatural horror centered on the eerie ruins of a grand ocean liner had the potential to be a unique and chilling experience, Ghost Ship ended up being critically panned thanks to a derivative plot and low-grade scares. Redditors like drdubiousYHM were even more let down by the movie for another reason.

RELATED: 10 Best Horror Movies With Creepy Grins, According To Reddit

They think that the beginning scene where gory disaster strikes on the titular ship made for an “amazing, incredibly memorable opening scene.” With its haunting details, the beginning immediately won over a lot of eager viewers who were inevitably left disappointed by the fact that “the rest of the movie is trash.”

Valerian And The City Of A Thousand Planets (2017)

Based on the French science fiction comics series Valérian and Laureline, Valerian and the City of a Thousand Planets was a movie rooted in some unique sci-fi concepts, not least the movie’s sprawling space metropolis setting. Unfortunately, whilst the movie was frequently beautiful, its execution left many of the audience feeling cold.

However, a striking opening sequence that shows how the metropolis grew from the International Space Station impressed Redditor AnyNamesLeftAnymore who considers it worthy of a “chef’s kiss.” A mix of organic and scientific, the opening showed how the movie could have made its creative ideas interesting though the rest of the movie didn’t quite manage to.

With an all-star cast that includes John Travolta, Hugh Jackman, Halle Berry, and Don Cheadle, Swordfish could have been a high-tech action thriller for the ages, and it had an opening to match. It starts with a tense monologue from Travolta’s hacker main character before opening up to a jaw-dropping slow-motion explosion that’s incredibly well-executed.

Redditor nutsotic calls it a “bad ass shot” that even compares to the iconic “bullet-time effect from the Matrix,” but adds “then the movie happens.” It was almost to the detriment of the movie that it started so strongly as it didn’t have much up its sleeve to back it up. By the time the credits roll on its weak plot, the impressive opening is long forgotten.

Whilst the sequel was largely unable to hit the same heights as Danny Boyle’s amazing post-apocalyptic horror movie from 20 years ago, 28 Weeks Later did manage to pull off one great scene worthy of the original with its opening. Redditor Crom86 loves the “chaotic” sequence that sees a family try to evade swarming zombies.

Though it was nothing like the quietly haunting opening of 28 Days Later, it demonstrated exactly how the sequel intended to take things to the next level in terms of intensity. Unfortunately, it’s almost impossible to keep up that level for an entire feature-length movie, and it’s no surprise that 28 Weeks Later doesn’t achieve this.

It didn’t quite manage to become as iconic as the beginning of The Spy Who Loved Me but Die Another Day‘s opening that saw Pierce Brosnan’s Bond become rough and haggard in the depths of a North Korean prison only to transition to a ridiculously fun hovercraft chase scene is pretty special in its own right.

That’s the part that appeals to Redditor bakhesh, who calls it “the most original openings of any Bond movie.” Not everyone would agree with their assessment that “the rest of the movie is just terrible” but there’s no denying it descends into a slightly cartoonish affair that doesn’t really do its tense opening justice.

Whilst the second movie in the series is generally rated a lot higher by fans when it comes to which is the best X-Men Movie, Redditor Ozlin believes it suffers from the same problem as X-Men Origins: Wolverine where the opening sequence is by far the best part. They particularly praise the “sense of tension and chaos” conveyed as Nightcrawler attacks the White House.

They also argue it “really demonstrates how dangerous mutants can be” in a way that makes it stand out from the rest of the series. Thankfully, the movie does manage to maintain a high level of tension as the X-Men investigate this new threat but the spectacular nature of the opening puts it on another level.

Whilst Hancock is a well-liked movie, one of the biggest criticisms leveled at the Will Smith-helmed superhero movie is that it doesn’t manage to deliver on its immense potential. With an opening sequence that sees a drunk Hancock causing chaos in his clumsy attempts to stop crime in LA, the movie immediately tells the audience that it’s not going to be a normal superhero film and it does so in style.

Redditor Acebladewing agrees that the opening is amazing and comments “I still like the movie as a whole, but it feels really disjointed at the end.” Though Hancock veers off in a completely different direction with a lot less confidence than it started, many would have preferred if it kept up the unique boisterous style that made the opening so great in the first place.

NEXT: 15 Things That Instantly Ruin A Movie, According To Reddit

Ryan Pineda Net Worth 2022 – From MLB to Real Estate Millionaire

Ruben Randall - May 15, 2022 0
TV/Movies
Norwegian film director and screenwriter Eskil Vogt returns to the director's chair with the supernatural thriller The Innocents. The film first premiered at...

The Expendables 4 Is Fixing Two Of The Major Failings Of...