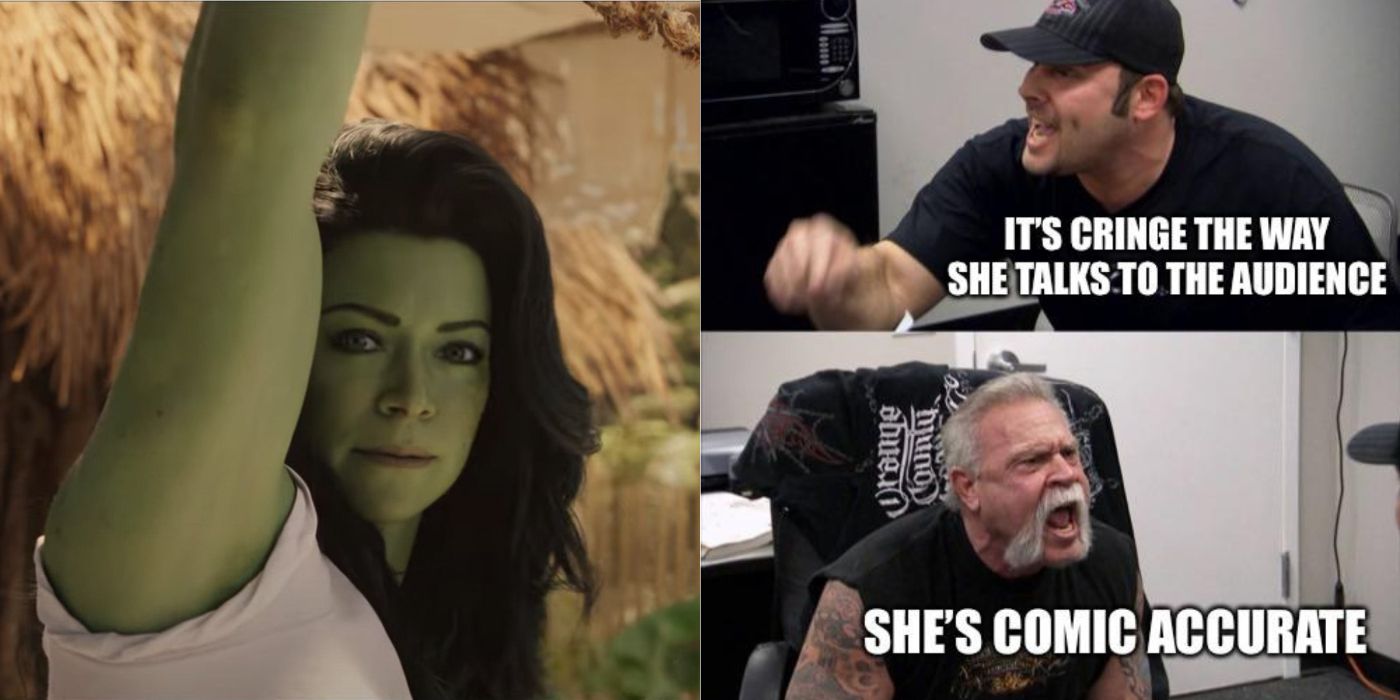 The She-Hulk series is coming to an end on October 13th, and there are just some memes that have been delicately placed on the internet that perfectly showcase She-Hulk and the other characters, but encapsulate the show as a whole.

From memes referencing Natasha’s demise to others pointing out the toxic conversations happening on social media throughout the show, there is no shortage of funny, yet accurate memes, that depict this iconically unique show.

Toxic fans have been running a muck on social media and other platforms, trying to smear She-Hulk’s name in every way that they can. While everyone is entitled to enjoy or reject She-Hulk as a show, that still gives no right for fans to berate a character.

Related: 10 Villainous Characters That Could Appear In Phases 5 and 6

That being said, this meme, by Redditor u/Wyjen, perfectly sums up the current discourse surrounding the show on social media. The toxic fans nitpicking at everything from the fourth wall breaks to the costuming, prompting other people to speak up and say that the show is comic-accurate, as indicated in the meme.

9/10 The Avengers Work For Free

One of the starting jokes of the She-Hulk show was the fact that the Avengers do not get paid. This line comes on the heels of Jennifer Walters getting fired from her law firm, and looking for other legal work.

While this line is quite comical and sums up She-Hulk’s experience at the moment, it is the fact that this reference, and subsequent meme, made by Reddit user u/Super_Philosophy_613, is a call-back to TheFalcon and the Winter Soldier when it is made clear that the Avengers work for free.

It was a running joke, in the first episode, that She-Hulk wanted to know if Steve Rodgers had ever done the deed. While this was not an initial question on the fans’ mind, by the end of the episode everyone needed to know Steve’s secret.

What makes this scene even funnier is the fact that even Chris Evans the actor who plays Captain America, probably didn’t know that his character engaged in coitus making this meme, made by @ixendrix on Twitter, an accurate depiction of what Chris Evans’ face looked like after finding out.

Probably one of the most iconic characters introduced into the She-Hulk series was Madisynn, a slightly drunk woman with an obsession with Wong. While her character was short-lived, the impact she made on fans was massive.

It is for that reason that this meme, made by Twitter user @vadersblade, is absolutely iconic and sums up her character in a nutshell. Her catchphrase, “Madisynn with 2 Ns 1 Y but it’s not where you think,” has made a lasting impact on fans everywhere.

While many Marvel fans have embraced the fact that Star-Lord defeated a villain and saved a planet with a dance-off, many “fans” cannot accept that She-Hulk would dare to have a moment of meaningless fun with an icon.

That being said, this meme, made by Redditor u/wintersoIdier, perfectly sums up the show because man fans have had their double standards surrounding this series that have often been disproved.

In Marvel’s Phases 4 and 5 alone, Wong has made a cameo appearance in Shang-Chi and She-Hulk while also owning his starring role in Doctor Strange into the Multiverse of Madness. Even though it was only two projects,he still has had the most cameo appearances out of every character in both of these phases.

That being said, this meme, made by @motmultiverse, not only sums up the character of Wong within the multiverse of the MCU, but it also sums up his role in the She-Hulk show as a whole because he makes so many appearances and plays a prominent role in helping Jennifer Walters win her case.

The She-Hulk show focused a lot of its energy on Jennifer Walters’ love life or lack thereof. When episode 8 came around, and Daredevil started flirting with Jennifer, it was only a matter of time before Jennifer set him on his walk of shame.

What makes this meme, created by @BlogMarvelll on Twitter, truly spectacular, is the fact that Steve Rodger’s face in this meme, was the face made by all Marvel fans whilst watching this episode. This meme perfectly encapsulates Jennifer Walter’s overall love life in the series, as well as this intimate interaction.

In this sassy meme, created by Redditor u/PhoenixNitrate, toxic fans, who have complained about this “new” MCU, were called out by Marvel. In all honesty, this call-out was a long time coming and was extremely well-timed in the show. Since the She-Hulk show experienced hate before it came out, this sass back by Marvel was a next-level call-out and a perfect moment in the show.

Because this type of call-out occurred a few times in the series, it became a prominent theme that both Jennifer Walters herself, and Marvel Studios, has a noticeable distaste for the toxic Marvel fans.

One of Wanda’s most iconic lines comes in Doctor Strange into the Multiverse of Madness when she draws a parallel between her wrongdoings and Doctor Strange’s indicating that there is a double standard when it comes to the actions of women versus men. This line, of course, serves as a great jumping-off point for memes, like this one created by @AvengersBad, about the She-Hulk show.

She-Hulk made it clear in the first episode that her Hulk form is not the same as Bruce Banner’s, so it seems almost fitting, despite the inequity of the situation, that She-Hulk destroys her shoes rather than rips her entire outfit, as Bruce Banner does.

1/10 The Best Place To Turn Into The Hulk

If this show proves anything, it is the fact that the best place to turn into the Hulk is in the bedroom, as indicated during the fourth episode of the show when She-Hulk goes on multiple dates as She-Hulk to attract a mate.

That being said, it might be a misconception that being the Hulk in the bedroom is a bad idea, as She-Hulk managed to not only pull a guy in her She-Hulk form but also bring him into the bedroom, making this meme, made by @dumbplng, about a Jeopardy conversation with Chris Evans, a completely accurate depiction of the episode and to the character.

Next: The 10 Most Hilarious & Memorable Nicknames Given To Characters In The MCU