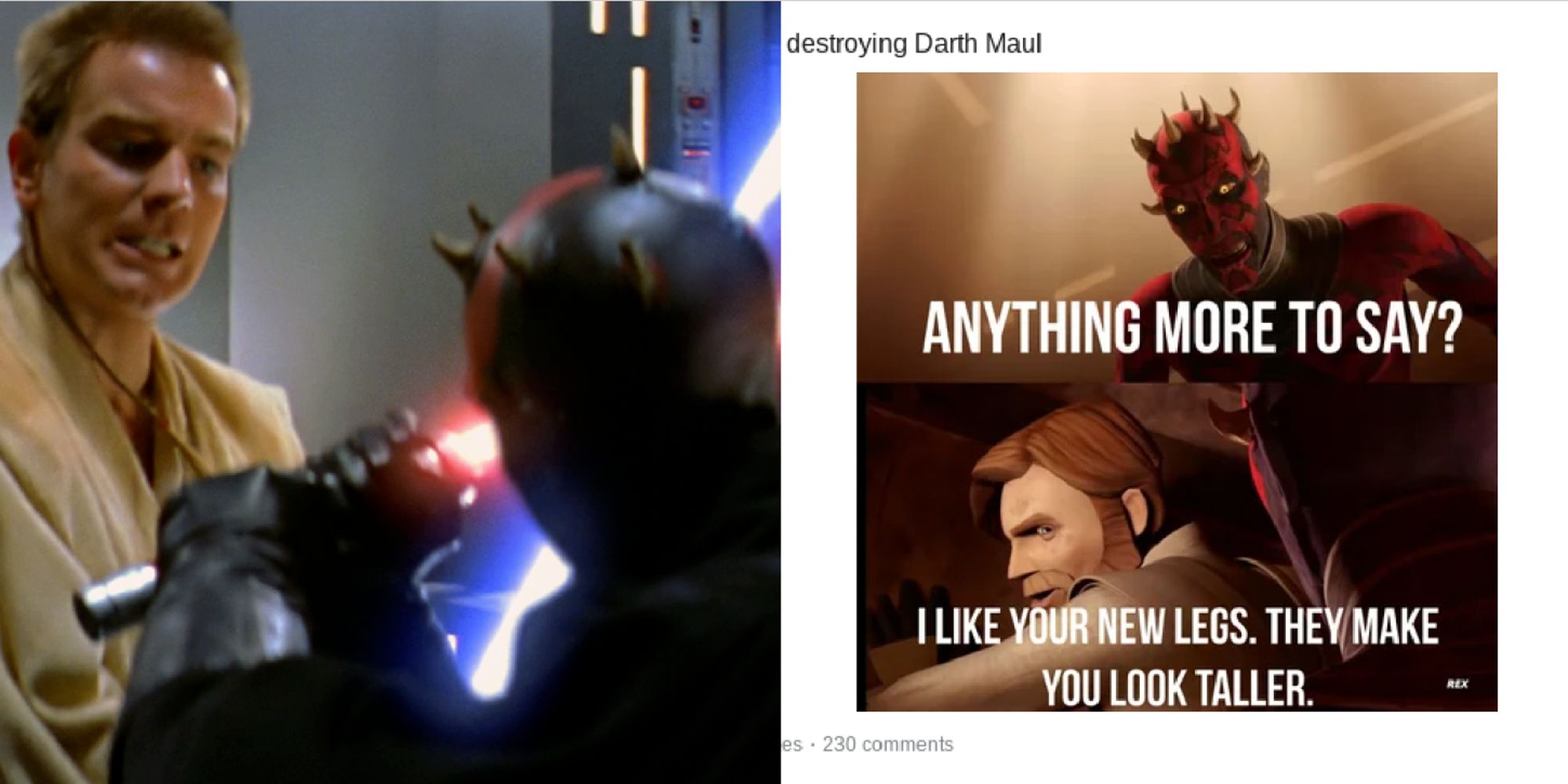 Obi-Wan Kenobi and Darth Maul’s rivalry is considered one of the most intense in Star Wars canon, and Obi-Wan vs Darth Maul continues to have new heartbreaking meaning in Obi-Wan comics even if the Zabrak Sith Lord never did make it into Obi-Wan Kenobi. After seemingly killing Maul in Star Wars: Episode I – The Phantom Menace, the two carried on an intense hatred for one another that sparked a connection that spanned several animated series and comic books.

Whether fans simply choose to laugh at the way Maul cheated death time and time again or celebrate the complexity and depth his rivalry with Obi-Wan achieved at the end, these memes perfectly capture one of the most iconic confrontations in the galaxy far, far away.

Destiny wasn’t don’t with Darth Maul after his duel with Obi-Wan on Naboo, far from it. After being sliced in half and falling down a reactor shaft, he would go on to control one of the top five most powerful crime syndicates in the galaxy and appear again onscreen in Solo: A Star Wars Story.

In order to know exactly how Maul survived being sliced clean in two, fans would have to also follow his story continued in Star Wars: The Clone Wars and Star Wars Rebels. Solo indicated that Maul might get his own spin-off film, which was something fans had been wanting ever since they felt he was unnecessarily killed off too early in his character’s development.

Even after being supposedly “killed”, Darth Maul was part of many duels, but none as emotionally gripping as the ones involving his nemesis, Obi-Wan Kenobi. Fans of Star Wars Rebels know that the charged “Twin Suns” episode was not the only time that the enemies had crossed sabers (along with Savage Opress), but it was the most impactful.

Their encounter on Naboo altered each character in such a profound way that it led them on similar paths; questioning the words of their former masters, contemplating their devotion to the Force, and wondering what their places were in the galaxy.

Darth Maul Always Found A Way To Come Back

Obi-Wan wasn’t aware that Darth Maul had survived their first encounter for some time, allowing Maul to regain his strength and mobilize his own coalition of dark siders. Throughout the Clone Wars, Maul would try repeatedly to kill Obi-Wan for his grievous disfigurement.

Maul represented a moment in time when a young Obi-Wan stepped perilously close to the dark side, using the anger of his master’s death to propel him and overpower a Sith warrior he would otherwise not have been able to. In future duels, Obi-Wan would attempt to curtail the emotions caused by Maul, and Maul would do his best to psychologically disturb the stoic Jedi Master.

Obi-Wan had a habit of destroying Darth Maul in more ways than one – his remarks were as cutting as his lightsaber. Some of Obi-Wan’s best quotes involve exchanges with Maul when the two warriors each try to strike a blow against the other’s psyche.

Sith prefer to incorporate psychological attacks into their martial repertoire in order to take their opponents off guard, a tactic Count Dooku tried with Obi-Wan as well. None of them were quite prepared for how much the Jedi Master also relished getting in a few

During Star Wars: The Clone Wars, Obi-Wan developed feelings for Satine Kryze, but even as a Jedi, he couldn’t prevent Maul from taking something from him that he loved. He could do nothing but witness her execution and the superiority of a long-embittered foe.

As this meme suggests, not only was it a blow to Obi-Wan emotionally, but it was Maul’s greatest victory, and more effective than any lightsaber strike could be. Watching Obi-Wan lose Satine like he lost his master Qui-Gon Jinn was Maul’s greatest triumphant, one he would remember for years to come.

While Obi-Wan often blamed himself for his own shortcomings, including his training of Anakin and the loss of his master Qui-Gon Jinn, Darth Maul blamed Obi-Wan for everything that went wrong in his life. Their rivalry was always greatly rooted in personal pain, though one took more responsibility for it than the other.

In this The Black List-inspired meme, two perspectives are shown, and only one has the blame correctly placed. Maul placed a great burden on Obi-Wan, and underestimated the Jedi Master’s ability to shoulder failure so well without being totally corrupted by it.

Obi-Wan’s life hasn’t been easy, and living as a hermit on Tatooine for decades certainly didn’t lessen the furrows in his brow. Over the course of thirty years, he is shown to lose some of his outer agility, weathered by worry and the passing of the years, whereas Darth Maul has seemingly remained untouched by the ravages of time.

Unfortunately, they’re only seen together during their final duel on Tatooine in Star Wars Rebels, as Maul’s appearance was cut from Obi-Wan Kenobi, when fans might have been treated to seeing them on more equal footing age-wise.

Even after he’d lost everything in the Siege of Mandalore and become a destitute hermit (not unlike Obi-Wan himself) he still went looking for the Jedi Master to finally end their rivalry once and for all. He wandered the deserts of Tatooine completely consumed by rage, intent on a glorious duel to the death.

Obi-Wan could never have predicted that in his twilight years, he would be called upon to duel his nemesis once again, but their relationship had to come full circle somehow. It was an excellent opportunity for Maul’s character to continue to have development and death, with each new stage providing new wisdom into the character.

Obi-Wan Realized Darth Maul Could Be Redeemed In The End

When Obi-Wan and Darth Maul’s rivalry reached its apex, the two warriors, now older and less acrobatic, fought on Tatooine under cover of nightfall. Each performed valiantly, and there were sparks of their former glory, but in the end, Obi-Wan proved victorious. While Maul wasn’t exactly a character who returned to the light side, he was given redemption in the end.

Their exchange brought up perspectives not unlike what this meme proposes; had Maul managed to hunt down and kill Anakin Skywalker on Tatooine years ago, he could have been considered a hero, but he didn’t know what sort of pawn he was to Palpatine – and neither did Obi-Wan. They both were deceived, and in the acceptance of that, they found peace.

After delivering the final blow, Obi-Wan held Maul as he lay dying in a very similar way to the way he’d cradled his master’s head as he gave his last breath. Maul asked whether Luke was the Chosen One, echoing Qui-Gon’s statement about his father Anakin, and Obi-Wan gave the Sith peace of mind.

This validated Maul’s place of importance in the Skywalker saga, and even as an enemy, he had been bound to the fate of the Chosen One, in whatever form the prophecy took, since the beginning. He was defeated because Obi-Wan had accepted his place long ago, and the ability to take life had no meaning for him, only to protect it. But the Chosen One promised balance in the Force, and to dispel the need for a rivalry like Obi-Wan and Darth Maul’s.

NEXT: 10 Memes That Perfectly Sum Up Qui-Gon Jinn As A Character In Star Wars

What is Kanye West’s net worth? How did he make his money? How much...