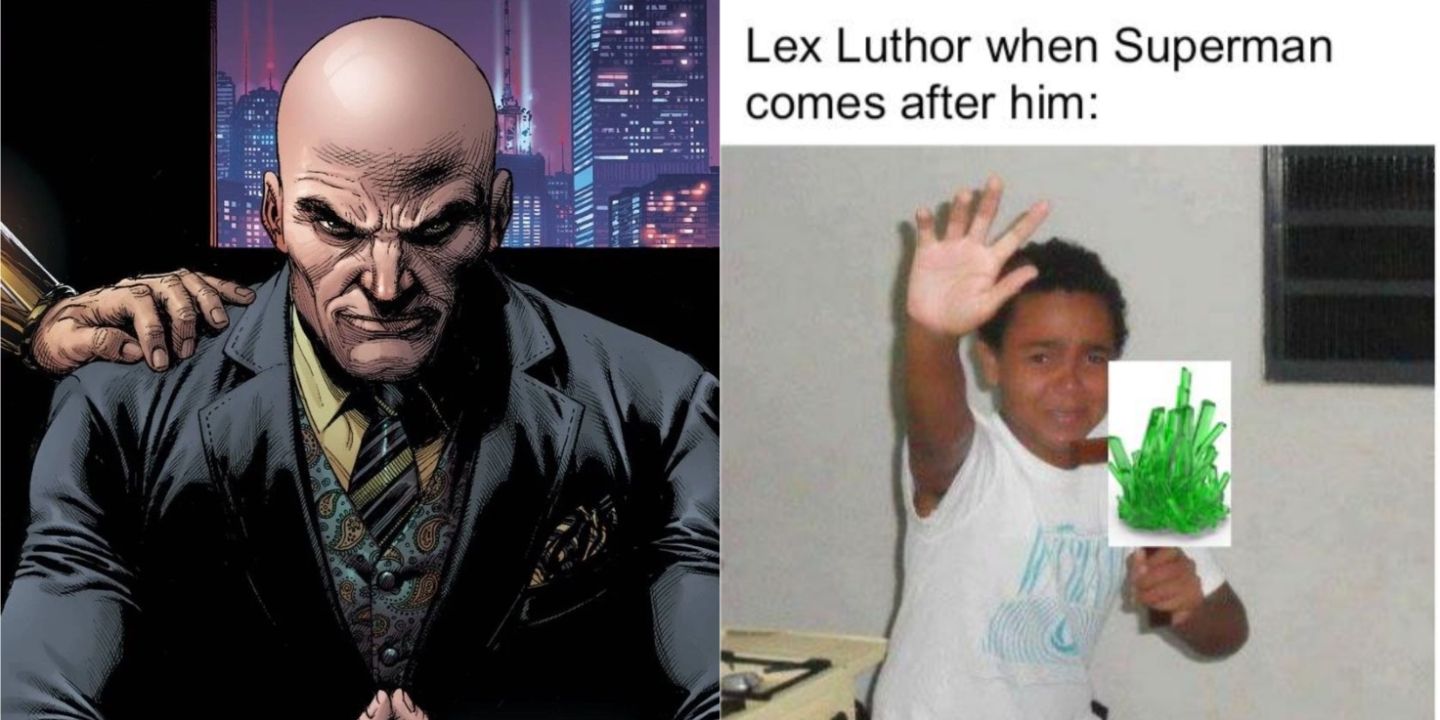 While Superman & Lois is not likely to return to television until early 2023, fans of the program are already excited about what the season has to offer. David Ramsey has teased that Diggle will become a Green Lantern, Chad Coleman is set to star as Bruno Manheim, and rumors abound that the show might finally introduce its very own version of Lex Luthor.

Despite how dangerous and formidable Lex Luthor is as a villain, a new televised portrayal of the supercriminal will have much to overcome. The character has garnered a laughable reputation in past years due to his handling in the DCEU, and many memes have been produced to poke fun at the figure.

Lex Luthor is perhaps best defined by his hatred of Superman. To many people in Metropolis, his disgust for the man of steel seems implausible and unfounded, yet the above meme demonstrates why Lex’s fears are justified.

Related: The 10 Best Lex Luthor Actors, According To Ranker

Beyond offering a glimpse as to why Lex dislikes Superman, the image also points to a key facet of the billionaire’s personality. He can’t simply be the only person to hate Superman, he has to let everyone know that he’s right in his assertion that Superman is a threat.

Despite being one of the smartest characters in DC Comics, Lex Luthor has rarely been able to figure out Superman’s secret identity. Much of it stems from a lack of desire to even deduce who the Man of Steel could be.

While Lex’s inability to discover Superman’s identity could be chalked up to the belief that the hero wouldn’t need to disguise himself, the more likely reason he can’t see past Clark’s disguise is because of jealousy. Lex chooses to ignore any signs that Superman is an ordinary being because it would be more insulting to discover that the alien that is besting him is just an ordinary man from Kansas.

While Lex Luthor does his best to paint his hatred of Superman as rational based on the Man of Steel’s mysterious heritage, deep down, the prime motivating factor in all his schemes is fear. The above image makes this abundantly clear as it compares the genius billionaire to a small child.

Despite all of Lex’s resources, he typically finds himself cowering behind a small rock just to ensure he doesn’t get decked to the face (or murdered). It makes him come across as pathetic, yet also sad, especially considering the constant use of Kryptonite has led to him receiving cancer.

7/10 Batman Refuses To Admit The Similarities

Bruce Wayne and Lex Luthor share much in common. They’re both billionaire geniuses, are committed to “protecting the Earth,” have severe trust issues, and are passionate about leaving behind a legacy for future generations.

Perhaps the most striking comparison between the two characters is how they refuse to acknowledge their similarities. Bruce can’t fathom being compared to Lex given the latter’s megalomania, while Lex won’t concede being likened to Bruce Wayne due to his belief that he is superior to the billionaire playboy.

One of the most famous comic storylines involving Lex Luthor involves his run for president. This took place in the early 2000s and saw the famous villain become the leader of the country thanks to his involvement in rebuilding Gotham City after the No Man’s Land arc in Batman.

While the poster highlighting Lex’s choice to take a pay cut was not one of the materials the businessman used to promote his campaign, it’s still important in illustrating why Lex ran for office. It wasn’t about money, but about power and legacy, two things that factor heavily into most of Lex’s actions.

Despite being one of the most sadistic and evil villains in DC Comics, the Joker is sometimes surprised by Lex Luthor’s grandiose schemes. While the above image might not be one of them, it perfectly highlights the dynamic between the two villains.

The Joker might be the more unhinged of the two villains, but Lex can be just as senseless as his occasional ally. He’ll commit to almost any scheme, no matter how dangerous or ridiculous it might be, just to take out Superman.

One of many memes which compare the controversial Amazon CEO, Jeff Bezos, to the infamous criminal mastermind, the juxtaposition of the two men works to connect them more than any number of words could. And it goes beyond just mere physical appearance.

Related: 10 Quotes That Prove Lex Luthor Is The Best Villain In The DCAU

As many people know, both men are rich, corporate tycoons that are treated seriously by many, yet in actuality are ridiculous. Bezos might not be as evil as Luthor, but his desires to go into space and accumulate as much of the world’s wealth as possible aren’t too far removed from Luthor’s maniacal goal to eliminate Superman.

Lex Luthor has trouble accepting Superman’s existence because it proves that other people are superior to him. It’s the reason he goes after the Man of Tomorrow with every burning fiber of his being.

Despite Lex’s hatred for Superman, he can’t accept when others can defeat the Man of Steel. It partly stems from the realization that there are other people besides Superman who are more powerful than Lex, but much of his shock comes from the belief that Lex is the only person ordained to kill Superman.

Though Lex Luthor tends to fund schemes that pit Superman against powerful villains like Metallo and Parasite, sometimes the criminal genius thinks outside the box. The above image is a case in point.

While Lex has never done anything as simple as putting Superman in blackface, many of his schemes have attempted to tarnish the Man of Steel’s image/reputation. The greatest example of this argument comes from Justice League Unlimited, where he manipulates Superman into destroying Lexor City during a battle with Captain Marvel.

Despite how frequently he comes across as a cold and calculating mastermind, Lex Luthor is still driven by emotion. Chief among these is jealousy, a fact which is evidenced by the iconic meme.

While there are different origins for why Lex Luthor despises Superman, the most common one involves him becoming jealous of the attention Superman receives. It’s not in Lex’s nature to be shown up by others, hence the reason he despises the Man of Steel so much.

Rodrigo Santoro shows daughter with her mother in a rare appearance...

Teen Mom Kailyn Lowry shows off the inside of her new...