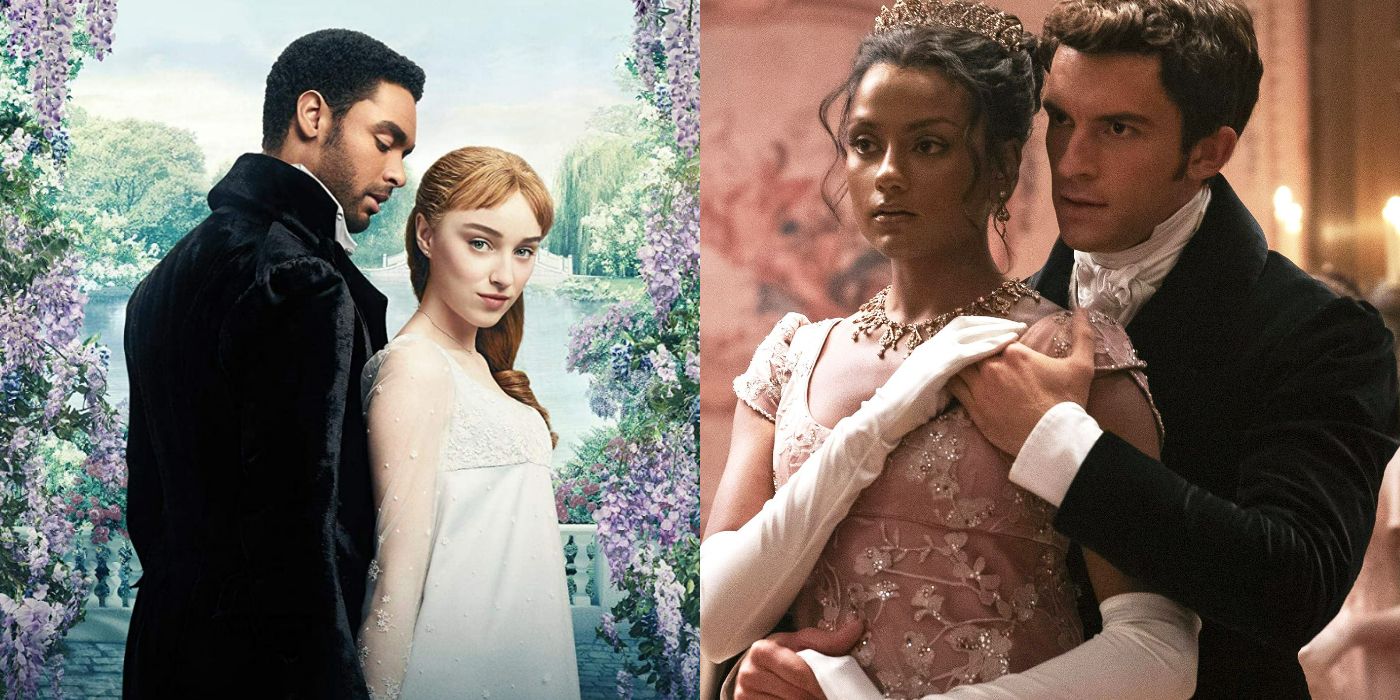 Netflix recently announced that Bridgerton season 3 started production on their Twitter page, but that’s been overshadowed by even bigger news surrounding the Regency romance. Social media creators Abigail Barlow and Emily Bear, of the Unofficial Bridgerton Musical fame, were sued by Netflix earlier last week, with the streaming company claiming unauthorized use of the Bridgerton brand.

In early 2021, Abigail Barlow and Emily Bear, under the name Barlow and Bear, created a musical phenomenon on TikTok using original work based on Netflix’s romance. While Netflix initially praised the songwriting duo while it was a social media stunt, they have recently come out against the pair for making money at various live events. Netflix has served Barlow and Bear a lawsuit, and there are some things fans may not know about these developments.

The Musical Began As A Concept Album

The millions of views on their Bridgerton musical TikTok idea became an opportunity for Barlow and Bear to streamline the creation of their album directly on their social media platforms like Instagram. This allowed fans to be a part of the process by letting viewers into the writer’s room and recording studio.

Many successful musicals start as concept albums, like 2019’s Hadestown – written as a concept album by the maestro, Anais Mitchell. The difference was Barlow and Bear were documenting their progress on social media in a way that catered to fans by allowing them into the magic. It’s no secret the social media aspect propelled them to even more success along the way.

After the whirlwind popularity of the project on TikTok, Netflix came out in support of the songwriters’ endeavors. According to an interview with OnStage Blog, Barlow and Bear claimed the streaming giant supported the idea, saying, “Netflix was very, very supportive.” With praise from Netflix, the team continued with their concept album based on the hit Regency drama and took inspiration from Bridgerton’s many romantic quotes.

The interest in Barlow and Bear’s songs had attention from every corner of the internet, including the streaming platform. Initially, it seems Netflix had no idea how transformative the source material would be, connecting fans during the Covid-19 lockdown. This showed just how popular fan-generated content can be and was the blessing Barlow and Bear needed to continue with their concept album.

Barlow and Bear were not authorized to make their unofficial musical official. While they had support for releasing the album, that was the extent. Via Deadline, a Netflix spokesperson commented: “Netflix supports fan-generated content, but Barlow & Bear have taken this many steps further, seeking to create multiple revenue streams for themselves without formal permission to utilize the Bridgerton IP.” The company further claims they reached out to the pair about potential licensing beyond the album but were misled.

These claims certainly do not bode well for Barlow and Bear. The success they’ve generated through their project is certainly warranted, but the steps to ensure their success through touring events may not have been the right course of action, especially without Netflix’s licensing permission. Their self-promotion and the fact they self-produced their work is impressive but lands them in hot water.

The Musical Performed At Major Venues

With the accolades afforded to the concept album, including reaching No. 36 on Top Album sales, they began performing their original songs for fans in person. Many of the musical numbers give beautiful insight into Simon and Daphne, the show’s soulmates. The two biggest venues Barlow and Bear have secured are sold-out concerts at the Kennedy Center in Washington D.C. and a forthcoming September 2022 performance at Royal Albert Hall in England (via New York Times).

It makes perfect sense that Barlow and Bear wanted to capitalize on their newfound fame and share their work with fans who first heard them online. The team secured major venues for touring events, an impressive feat, and shows the power of hard work and networking in the music industry. With Netflix catching wind of the $149 tickets and VIP packages, they decided to protect themselves against the duo’s for-profit concerts (via Deadline).

Netflix released Bridgerton season two earlier this year, as well as their own promotional live event, “The Queen’s Ball: A Bridgerton Experience.” This rivaled the musicians’ own events for which Netflix claimed copyright infringement. Barlow and Bear engaged in for-profit events while the streaming juggernaut was doing the same. The lawsuit documents claim Netflix alone has the right to promote the Bridgerton brand (via Deadline).

Barlow and Bear used their love of one of Netflix’s most popular TV shows to share their fan fiction with the world. This is not uncommon on social media, but while many creators gain loyal followings, many do not see the kind of success Barlow and Bear have. While their work on the musical is original, their capitalization of the characters made famous by Netflix’s show is a tricky line to have crossed.

Many A-List Broadway Stars Have Been Attached

RELATED: Why Focusing On Penelope & Colin Is The Right Call for Bridgerton Season 3 (& Why It Should’ve Been Benedict)

The attention the Unofficial Bridgerton Musical album has garnered is unprecedented but not unlikely, especially with the access TikTok affords users. With how catchy the songs are, with genuinely beautiful lyrics, it’s easy to see how popular they became and how they generated interest from Broadway’s brightest stars. Netflix’s lawsuit may have a hard time silencing two of the most creative young voices to come out of social media.

Barlow And Bear Won A Grammy

When Barlow and Bear’s Bridgerton musical was announced as the winners for “Best Musical Theatre Album” at the 2022 Grammy Awards, it was a welcome surprise. Beating out heavyweights Andrew Lloyd Webber and Stephen Schwartz for the coveted award almost certainly was due to the social media influence.

RELATED: 8 Things Hinted That Colin & Penelope’s Story Was Next in Bridgerton Season 3

Winning a Grammy award for an independently produced album based on a viral TikTok video is a crazy success story and only one that could happen in current times. With social media at the forefront of the 21st century, the award win certainly proves a Grammy win can come from anyone, not just well-established musicians with storied careers.

In addition to Netflix’s statement against Barlow and Bear, Julia Quinn – author of the Bridgerton novels – also released a statement. Quinn said she thought Barlow and Bear were two wildly talented singer-songwriters, but when it came to her intellectual property, seeking financial gain was different from sharing love for the show on social media (via New York Times).

Fan-generated content is important for the relevancy of a popular work, and the Unofficial Bridgerton Musical is certainly no exception. As the original novels were released between 2000 and 2006, the Netflix series brought them into popularity, and the TikTok sensation brought even more attention, judging from the project’s touring events, Grammy award nomination and win, and inclusion in Forbes 30 Under 30 in 2022. The continued successes of the musical and its stars capitalize on Quinn’s own work, for better or for worse.

The Netflix series has its fair share of scandal, and the musical is no different, as executive producer Shonda Rhimes has commented on the drama. Rhimes came out in support of Netflix’s decision to sue Barlow and Bear for unlawful infringement on the Bridgerton IP. She elaborated that the songwriting pair took their fandom too far and capitalized on their successes for financial gain (via Playbill).

Netflix’s decision to speak out against Barlow and Bear now, after the Grammy win, is interesting when the studio considers how supportive they were of the initial video. With a major streaming platform calling out creators for capitalizing on their triumphs, it’s worth questioning if future content creators are in danger of acting on their own fandom creativity.

The Album Started Out As A Tik Tok

Barlow and Bear found fame when Abigail Barlow posted a 15-second TikTok video asking her audiences, “what if Bridgerton was a musical?” That Christmas, Bridgerton had swept the world by storm, and the songwriting duo were inspired. The power of social media cannot be understated as it relates to their monumental acclaim.

Fans engaging with the songwriters’ videos often gave advice on the project, and contributed to the collaborative process. TikTok is no stranger to hosting musical related content, such as Ratatouille: The TikTok Musical in 2020. The success Barlow and Bear have received says so much about the current relationship with social media and how powerful it can be.

NEXT: The 10 Best TV Shows To Watch On Netflix This Month


List Writer for Screen Rant, Hannah Holt is an Arizona native, who previously worked for The Walt Disney Company and dreams of a career in screenwriting. She graduated with a theatre degree from Northern Arizona University, but film is her true calling. She loves looking up IMDb trivia of every new film she watches, or catching up on the latest movie musical.

Ruben Randall - September 7, 2022 0
TV/Movies
The Toronto International Film Festival will make its grand in-person return this week with a slate that builds on its expansion from previous years....