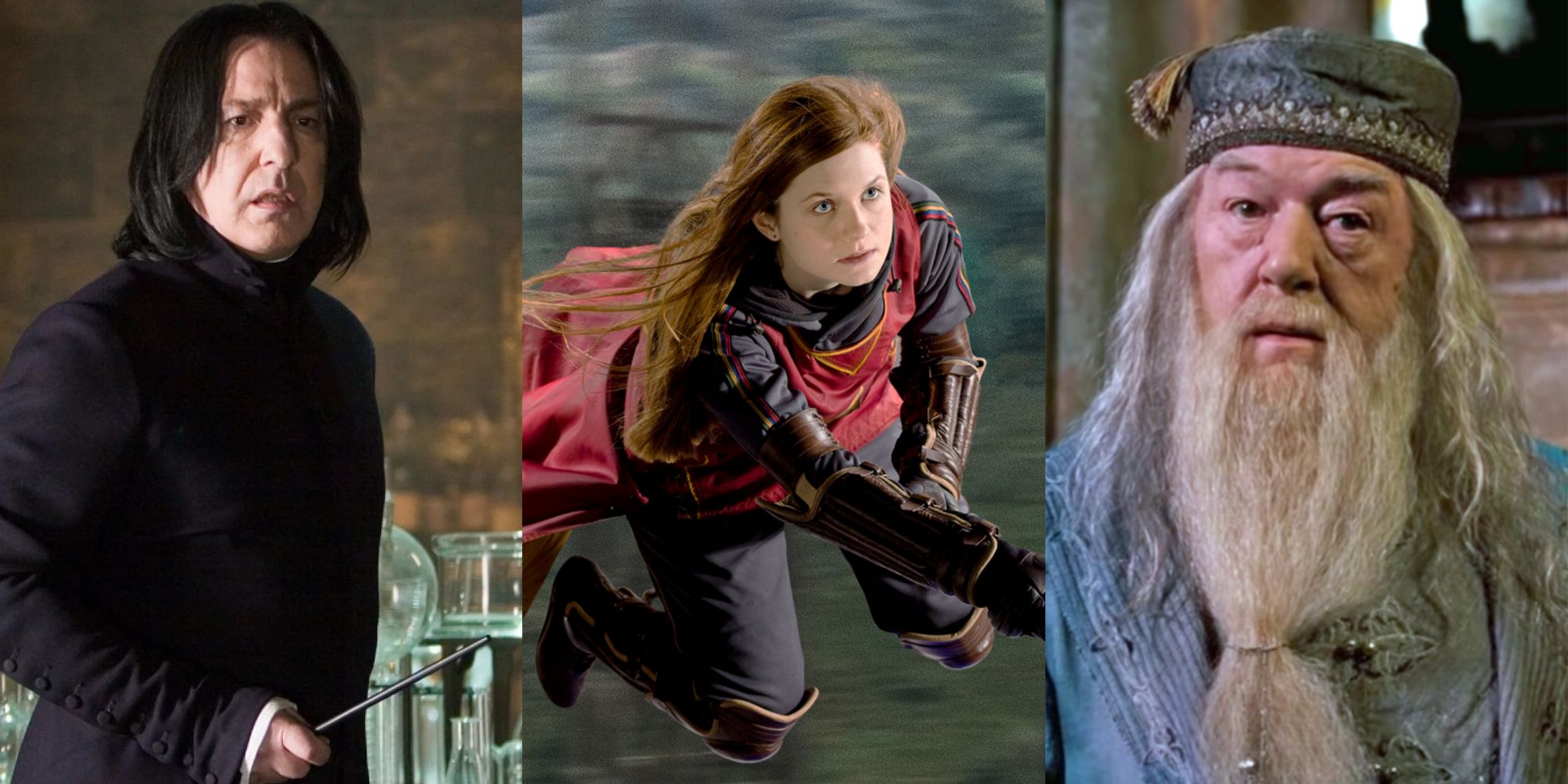 With the recent news about Warners Bros. hoping to further expand the Harry Potter franchise, fans are excited to potentially see some of their beloved characters from the series back on-screen. But apart from offering more content for new and devout Potterheads, this news means that many problematic fan-favorite characters may have the opportunity to be further explored and even redeemed.

Although the Harry Potter series thrives on complexities, numerous characters have become idolized when they perhaps should not be. While this is something future installments could rectify, for now, fans must continue to reconcile the fact that some of their most admired characters are sadly unworthy of that adoration.

Draco Malfoy’s popularity is largely derived from specifically extrapolated parts of his book character, amplified by the plethora of fanfics and ffanshipsthat posit him as just another misunderstood but kindhearted bad-boy.

Related: 8 Draco Malfoy Memes That Sum Up His Role In Every Harry Potter Movie

Canonically, Draco was a bully who enjoyed torturing his peers and flaunting his status. Although his upbringing undoubtedly influenced his prejudices, this still does not absolve him of the abhorrent way he treated schoolmates, from ridiculing Neville to joking about Harry’s dead mother. Draco’s countless ruthless moments cannot be negated by his little redemption, unfortunately making his idolization by the fandom unwarranted.

Remus Lupin Was Not Faultless

Although Remus Lupin is often seen as the least problematic of the Marauders, he still had many faults, as evidenced by some of the Remus Lupin book quotes omitted from the movies.

While the most compassionate of the Marauders, he still served as a guilty bystander for their pranks, such as sitting idly by while Sirius and James tortured Snape. He is also shown to be impulsive and avoidant, such as when Harry has to remind him of his duty toward Tonks and Teddy in The Deathly Hallows. He gets a lot of leeway for his actions due to his werewolf complications, but Lupin should be far less idolized than he currently is, especially given the parallels yet differences between him and actual noble characters like Neville or Lily.

Ginny Weasley Could Be Cruel

Ginny Weasley is one of the most likable Weasley siblings in Harry Potter, largely thanks to her memorable personality from the books which was infinitely more developed and complex than her movie counterpart.

However, despite how much better she is in the books, Ginny still has faults that put all the admiration for her character into question, namely how she could be cruel to others. This is seen especially in The Half-Blood Prince, where her dislike for Fleur turns into Ginny calling the part Veela girl “a cow” and nicknaming her Phlegm. She even roasts Hermione later on, telling her not to talk about Quidditch as she’ll only embarrass herself. Ginny’s tendency to allow her annoyance to turn her cruel is an unfortunate downfall of her admired character.

Fred and George are admired within the fandom, with the pranksters rising to even more popularity and love after Fred’s unfortunate death. However, as idolized as they may be, there are still several valid criticisms regarding the Weasley twins, many of which prove why they should not be placed on such as high pedestal.

Several of these are regarding their love for jokes, some of which can be taken too far either through their harsh words or even actions. The most infamous example is when shoved Graham Montague into one of the vanishing cabinets and left him there for days, fatally injuring him while they ran off scot-free and never once regretted or even thought too hard about their actions and how careless they were.

Harry’s godfather is often praised by Harry Potter fans, especially given how he spent years on the run for a crime he was framed for. Between being wrongly accused and being one of the few adults to provide Harry with genuine love and care, it’s easy for fans to idolize him.

Related: 10 Memes That Perfectly Sum Up Sirius Black As A Character

However, Sirius still has many of the same unpleasant qualities he’s shown to have in his youth, which make him someone that deserves to be far less admired, if at all. He is still shown to be unremorseful for his teen years (such as being unapologetic about bullying Snape) and is cruel to Kreacher, to the point where Kreacher betrays his arrogant master. While he may have matured a bit, Sirius still has many qualities that diminish his credibility as a role model.

Rubeus Hagrid Was Not Harmless

Although Hagrid is portrayed as a jovial and well-meaning giant, complete with many hilarious Hagrid quotes in Harry Potter, he is also a problematic mentor who often puts his interests above logic and reason when asking things from the Golden Trio.

Whether it was sending Harry and Ron to Aragog, or asking Harry and Hermione for their help in caring for Grawp, Hagrid consistently allowed his wishes to cloud his judgment; as a result, he endangered the three more than he helped them. Plus, he often forgot the student-teacher relationship they shared and let his emotional personality and power of authority overwhelm them, proving to be an unworthy role model.

James Potter Used To Be An Arrogant Bully

Although initially James Potter is depicted as an admirable father figure – fighting on the right side of the first Wizarding War and sacrificing himself for his family – it becomes clear that there was much more to his character as Snape’s memories shed new light on Harry’s father first in The Prisoner of Azkaban and then more vividly in The Order of the Phoenix.

By the end of the series, it becomes apparent that James was an arrogant schoolboy who picked on others for both attention and fun, choosing to spend his free time tormenting others rather than being bored. His character bears many more similarities to a young Draco (complete with the same judgmental “I think I’d leave – wouldn’t you?”) than a young Harry, proving why he doesn’t deserve to be idolized.

Molly Weasley Could Be Vicious

Molly’s genuine care and maternal affection toward Harry, along with her giving and kind nature, all seemingly make her a great contestant for one of Harry’s best role models. However, there are many valid and unpopular opinions about Molly Weasley that reflect why she should not be idolized.

The most recurring and overarching of these is her tendency to be vicious, especially toward those who do things differently from what she is accustomed to, whom she will criticize viciously – seen especially with Fleur. She is also guilty of favoritism and is prone to childish quick judgments, such as her treatment of Hermione based on some false gossip in The Goblet of Fire, all of which posit her as undeserving of all her adoration.

Severus Snape Was Not Redeemed

Severus Snape remains one of the most contested characters within the Harry Potter fandom, however since the release of The Deathly Hallows he has grown to become an admired and idolized character backed by evidence such as the many Harry Potter quotes that prove Snape was a hero.

But, while he may be granted a slight redemption arc through his helpful role in Harry’s journey, those fleeting memories do not excuse the fact that he spent several years making Harry and other students miserable. From commenting on appearances to roasting parents, Snape constantly misused his power to torture those beneath him. Not to mention how he was preoccupied with the Dark Arts and did initially join Voldemort’s ranks.

Albus Dumbledore Was Dark And Deceitful

Albus Dumbledore is revered as a wizard both in and out of the Harry Potter world, with his vast power, ongoing skill, and immense care and love toward Harry being among his greatest character strengths.

Unfortunately, many factors go against admiration for Dumbledore. For starters, it’s canon that he too was once drawn toward the dark side, playing a contributing role in Grindelwald’s rise to power and even sharing his magic supremacist ideals. Furthermore, he constantly let Harry down, whether it be through distancing himself from the young boy or gatekeeping pertinent information like Harry being a Horcrux. He may have been a brilliant wizard, but Dumbledore undoubtedly was a questionable role model undeserving of idolization.

Next: 8 Dumbledore Memes That Sum Up His Role In Every Harry Potter Movie

Dave Franco and Alison Brie start work on Somebody I Used to Know –...

Ruben Randall - June 19, 2022 0
Money
David Koechner is an American actor and comedian who has worked in the entertainment industry for over three decades. his role in the 2004...