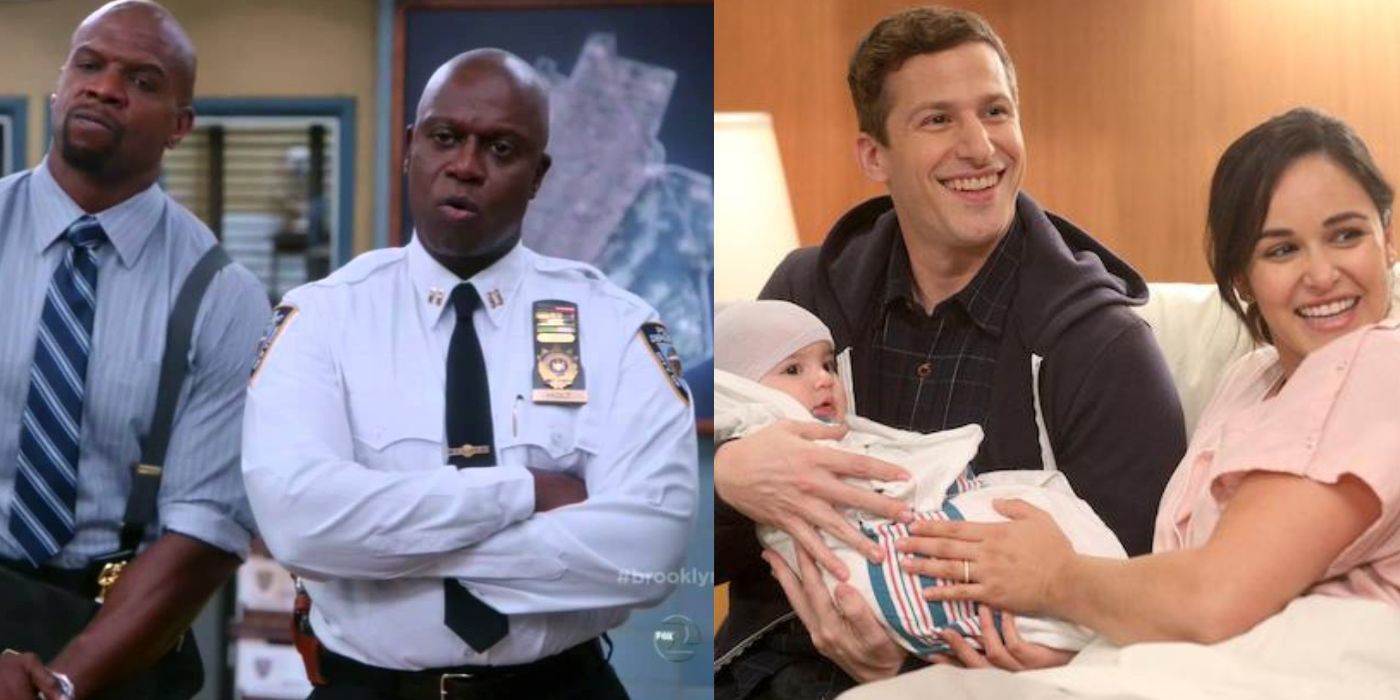 Brooklyn Nine-Nine was groundbreaking in its run. From being brought back to the dead, to its multiple iconic moments, the sitcom aired weekly to loyal fans and viewers.

Since its finished airing, fans have been reminiscing about their favorite moments, many of which were improvised by the cast during filming, without fans knowing. The makings of a good sitcom is often the ability of the cast members to bounce off each other naturally, which Brooklyn Nine-Nine saw plenty of.

In a tweet from the official NBC Twitter account, they revealed that Andy would switch to calling Amy “Ames”, specifically in the scene where Amy has just given birth to their son.

The moment is a slow, heartwarming one, rare for the usual face paced nature of the show. Andy switching from Amy to Ames is so subtle most fans miss it on the first watch, but it’s a glimpse into Amy and Jake’s relationship.

In a much loved episode where Lin-Manuel Miranda guest stars as Amy’s brother, it’s made clear that the two of them clearly don’t get on very well.

David, Amy’s brother, smugly tells Jake and Amy that he got to the restaurant an hour early, which already sways Amy’s mom into favoring his company. He boasts about sharing a soup, specifically a French Onion soup, which fans later found out Miranda improvised, given that his favorite soup is in fact French Onion. It’s only a small line, but adds enough depth to Amy’s brother to make him feel real.

Brooklyn Nine Nine is famous for its cold opens and this one doesn’t disappoint. The gang is comparing their oldest arrests, but Boyle joins the conversation late and mistakes it for the oldest person they’ve slept with.

Actor Joe Lo Truglio, who plays Boyle, starts rambling about the oldest women he’s slept with and drops in random facts about this woman, including the fact that she was someone’s Grandma. Andy Samberg, who plays Jake, can’t keep a straight face at Boyle’s improvisation in this scene, and breaks character.

When Jake ends up in jail after a case goes wrong, he befriends his cellmate. Caleb, who happens to be a cannibal, is Jake’s only friend inside prison. In a hilarious scene where Jake is trying to work out how to get out of prison, he’s bouncing ideas off of Caleb, who volunteers to help him.

Caleb admits that he’s good with needles, thanks to his previous experience of being a cannibal, to which Jake retorts that he’s glad they’re friends, but he wishes he’d stop bringing up his cannibalism. Caleb responds quickly “But we’re still friends”, clearly not hearing the latter half of the statement. The actor, Tim Meadows, later revealed that he improvised this on set to make Andy Samberg laugh and was happy to see it make the final cut.

6 Everyone Wash Your Hands

It seems that much of the Amy and Jake introducing their baby scene was improvised, including Jake’s hilarious closing quote. Jake passes the baby to Amy to take Rosa’s phone to watch a video of Holt and Terry dancing, but just before the baby is passed to the rest of the Nine Nine to hold, Jake tells them all to “Wash your hands!”

It was a moment not written in the script, but a year later when the episode aired, it was reflective of the pandemic at the time. It was almost predicting the future, there was no way to know how relatable that line would be almost a year after filming.

5 Title Of Your Sex Tape Jokes

It was revealed at the Brooklyn Nine Nine 2018 Comic Con Panel that the Title Of Your Sex Tape Jokes started as off-script and off-screen jokes between the cast. They often did it to keep the mood lighthearted and keep the humor high, and it eventually ended up making its way onto the screen.

It became one of the longest running jokes on the show, especially between Jake and Amy, despite never actually being written into the script. Most of the time the cast would vibe off each other and throw the jokes back and forth, with the funniest one making the cut.

Fans of the show will know that whenever Jake finds himself in an awkward or uncomfortable situation he starts talking to himself, specifically repeating the words “Cool Cool Cool” over and over again. What started as an off set joke to make fellow cast members laughed turned into one of Jake’s signature sayings, and became an essential part of his character.

In a heartwarming scene that sees Amy and Jake bonding over their love for their newborn son, it’s revealed in a Script to Screen video that the “I Love You” to each other was improvised by both of them. By this point in the show, Jake and Amy have been together for a while, meaning Melissa Fumero and Andy Samberg have a pretty good grasp of their characters and their relationship.

The moment is crashed by Boyle, who has a habit of stepping in on important Jake and Amy moments, but it still works perfectly as a scene that loyal Jake and Amy fans love.

Captain Holt has a history for delivering zingy one liners that has everyone laughing. After questioning Amy on why she’s late for work, Holt finally gets an answer out of her, to which he replies “Hot damn!”, a moment that was completely unscripted, and had the cast laughing.

Eagle-eyed fans will notice the cast members trying to keep a straight face in the background. The moment became so iconic it became a meme in its own right, the gif of this scene is regularly circulating around social media.

This iconic chant from the show started as a way to warm the cast up before shooting. According to multiple actors, Terry Crews would shout “Nine Nine” before a scene to get everyone ready, and it ended up making its way onto the show.

It’s used in the show in the same way as it was used off set, whenever someone felt that the team needed a pep talk or cheering up, they would shout “Nine Nine!” in the hopes of raising spirits.

NEXT: Brooklyn Nine-Nine, 10 Memes That Perfectly Sum Up The Show

See also  Teen Mom fans slam Kailyn Lowry for 'damaging' behavior around son Lincoln, 9, & claim she has not 'made him a priority'