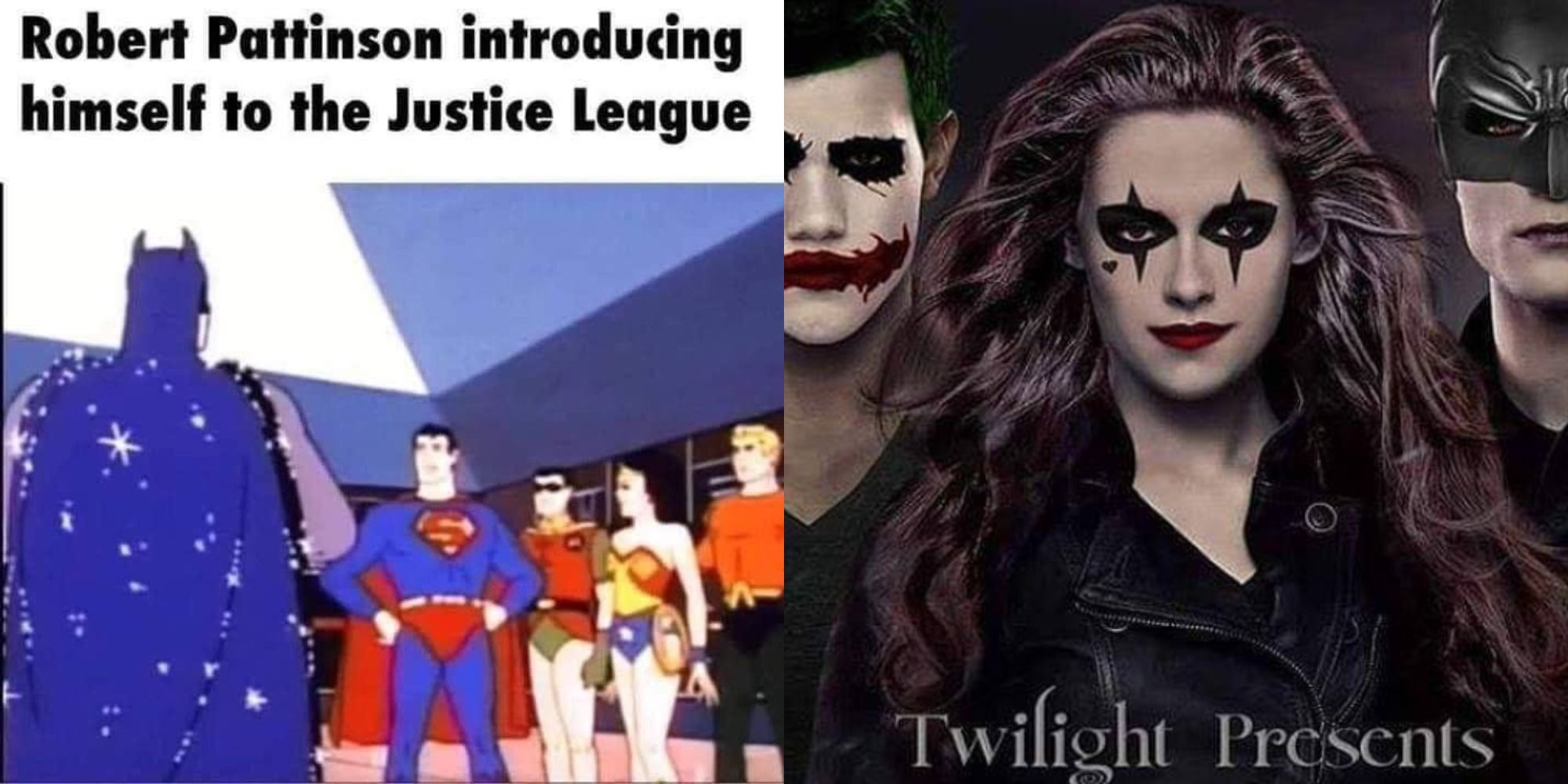 Robert Pattinson’s latest release, The Batman, saw him donning the suit of the caped crusader and becoming vengeance in a refreshing and lauded performance. Yet, this success and acclaim could not prevent his latest project from the inevitable: Twilight and Batman memes.

Despite having ended years ago, Twihards still associate the projects of The Twilight Saga’s cast with the beloved series, especially if that star is the hero of the series. With another mysterious persona and bat association, it was only a matter of time before Pattinson’s Batman was tied to his Edward Cullen.

As If You Could Outfly Me!

One of The Batman’s most exciting scenes was Bruce leaping into his bat flight. While Batman’s suit has incredible powers and many gadgets, this scene was a visual delight especially for Twihards, such as @bellas.lullaby, who were waiting to make the perfect vampire bat jokes.

As Edward explains his strength and powers to Bella, he lists off all his supernatural abilities, letting her know that no human could survive his kind. Just as Pattinson could not be fought off or outrun, his new character cannot be outflown.

Say It. Out Loud.

Bella’s confrontation with Edward in the forest is an iconic scene of the film, with the angsty tension palpable through the screen. The moment she first admits to knowing he is a vampire is one fans hold very near to their Twilight-loving hearts.

Related: 10 Twilight Quotes That Would Fit Right Into The Batman

This is why this scene was one of the first to be turned into a meme (by @ordinary.tater.tots) once Pattinson’s role as Batman was announced. The opportunity was just too good to be missed, and the best part of the meme works perfectly for Pattinson’s Bruce as well, who also hides his true identity.

Edward has a tendency to self-depreciate and paint himself as a monster, both a result of his past mistakes and his unfortunate view of what it means to be a vampire. As such, he is constantly reminding Bella of his evil nature and refuses to see himself as the hero.

Ironically, The Batman sees Pattinson donning the role of an actual DC superhero, albeit one with cloudy morals as well. A subtle edit by @bellas.lullaby transforms his iconic “what if I’m not the hero, what if I’m the bad guy” line into a meme about Pattinson now being the “bat guy” instead, perfectly fitting his situation.

The Jacob-Bella-Edward love triangle is one of the most popular among teen series – despite its share of cringiest lines – with Team Edward or Team Jacob becoming a defining question. Since the three had great chemistry with one another in the films, fans are yet to see Taylor Lautner, Kristen Stewart, and Robert Pattinson reunited on-screen.

With news of Pattinson getting the role of Batman, fans, such as @escaperealitycomics, were quick to wishfully cast the other two alongside him. With Stewart and Lautner being proposed for various DC characters as well, fans fabricated this continuation of the beloved series with their favorites working together again.

This Is The Skin Of The Caped Crusader, Bella

One point of distinction between Twilight’s vampires is their tendency to sparkle in the light. In a scene where Edward shows Bella what he truly looks like, he exposes his chest to the sunlight. Bella admires him, saying his “beautiful” skin is just like diamonds; “this is the skin of a killer, Bella,” is Edward’s retort.

Pattinson’s Batman cannot escape the shine of his Edward, with Redditor iphotoexpert poking fun at his past role in this hilarious meme. While Bruce Wayne may not have the same sparkly skin, he does have a Batman costume that can easily be bedazzled to impress his Justice League pals.

While Jessica Stanley is pointing out the Cullen clan to Bella during her first lunch at Forks High School, Bella’s attention is immediately caught by Edward, who she asks Jessica about. From his perfect looks to his mysterious demeanor, Bella is smitten with him right from the start.

It’s likely that Bella would have found Batman just as intriguing as she did Edward. Plus, it would have been hilarious to see Jessica bring this meme by @dolly_golightly to life, referring to Batman not by name, but instead by his self-proclaimed title of Vengeance.

Just as Pattinson’s Batman and Edward have many similarities, The Batman and Twilight themselves also share many subtle elements besides Pattinson’s involvement, such as tense romance and conflicted heroism. However, this meme that @comicsheads18 found while scrolling on Twitter does not focus on those.

Instead, it highlights the cinematic parallels between Edward saving Bella from the truck and Bruce saving the former mayor’s son from a speeding car. What makes this meme so hilarious is the impressive attention to detail and how well it proves that fans can make anything relate to their favorite series.

Bruce Wayne and Edward Cullen are essentially the same person. Dark past, muddled sense of self and morals, wealth, enhanced strength and abilities, constant brooding – these are just some of the many traits shared by the two characters.

While Pattinson’s versatility in regards to acting has been adeptly showcased, the similarities between these two roles are too many for the Twilight fandom to ignore. The image @twinostalgia tweeted of both Edward and Bruce in matching Raybans reminds fans everywhere that Pattinson still carries a bit of Edward with him.

Since the end of the series, fans of the cast members have made it a mission to keep them connected with their past life in Forks. Whether it be Kristen Stewart, Nikki Reed, or Jackson Rathbone, all of the main cast will always be affiliated with filming the beloved series that rocketed their stardom (whether it was because they delivered some iconic quotes for Twilight fans or because of the great action sequences).

In this way, The Twilight Saga era never really ended. Nor did the series reach its finale, apparently. As suggested by this meme (created by @twilight.memes.forever), The Batman is merely an expansion of Pattinson’s Edward Cullen, ergo the series becomes required viewing for anyone wanting to watch the new film.

One of the ways Twilight’s vampires are different from conventional ones is that they do not turn into bats, unlike most media depictions. While Edward is gifted with many other abilities, shapeshifting is reserved for his rival, Jacob, and Jacob’s pack.

Luckily, it seems he has at last been able to rectify this. Although it took a few years, Pattinson has finally turned into the bat he never could in the series, albeit in an entirely different world. Fans, such as @idiotoftheeast, were quick to seize this opportunity and ensure many bat transformation memes ensued.

Many fans of The Twilight Saga were young teens when the series first came out. This is a part of why the recent Twilight Renaissance has risen: as this meme by @twilightreborn suggests, many of those people are now growing up and rediscovering their old favorite series as adults, watching it through a new lens.

While Twilight itself holds this nostalgic power, the projects of its cast members are equally as anticipated by Twihards. Seeing old favorites on the screen in new roles is an exciting experience, especially if that means seeing the old heartthrob Edward Cullen turn into the new rebel hero, Batman.


Recently having completed a BA in Comparative Literature, Ashvaria is a literature and media nerd – particularly when it comes to anything pop culture! Being an advocate for diversity & inclusion, she is especially interested in how works depict and treat minority characters.
Her personal favorite topics include anything pertaining to Harry Potter, The Twilight Saga, Glee, the MCU and, of course, the original cinematic masterpiece: Shrek.