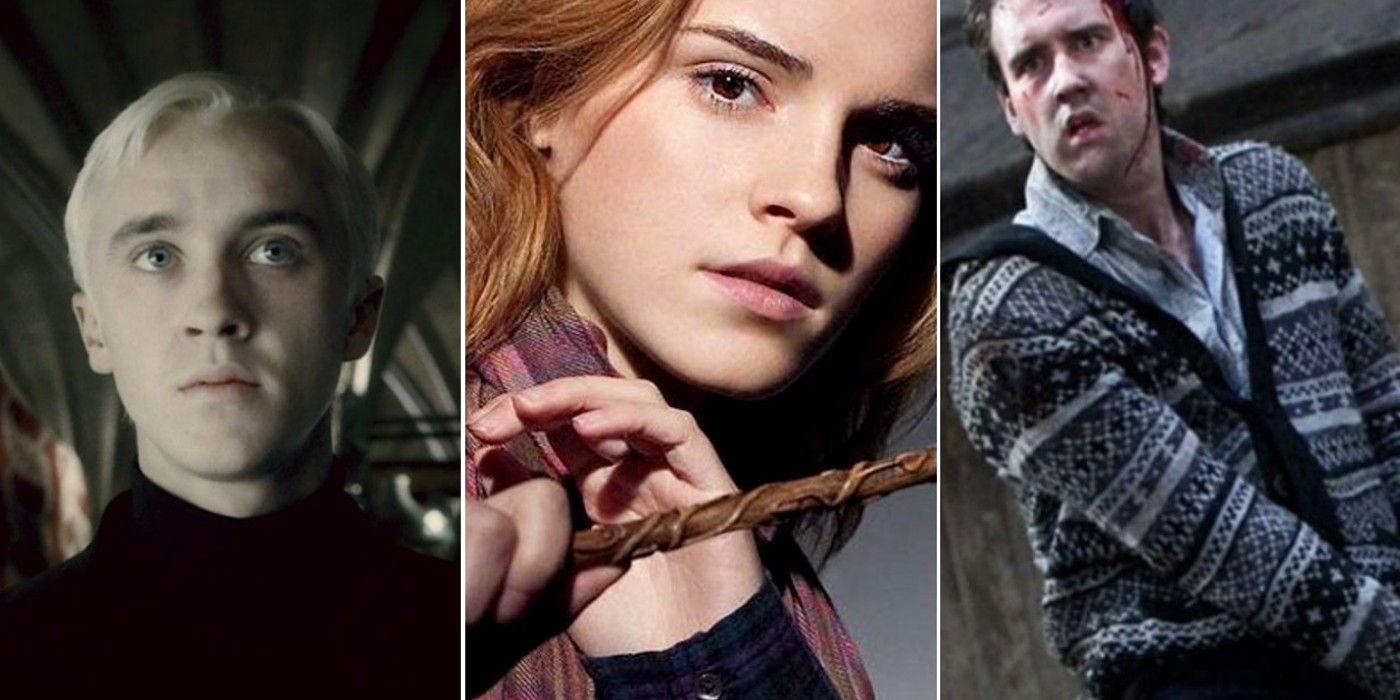 As evidenced by its title, J.K. Rowling’s famous Harry Potter series centers on Harry, the Chosen One. The boy from the Privet Drive cupboard also carries the lightning bolt scar and is marked by prophecy as the defeater of Lord Voldemort. But no man is an island and, throughout Harry’s journey, he meets numerous fascinating characters, all with their own stories to tell.

Ironically, Harry never wanted to be a famous hero. In fact, he would have much preferred to be a normal schoolboy. It would have perhaps been suitable if someone else had taken over the role of the protagonist, particularly since many Harry Potter characters more than had the potential to take up that position in his stead.

10 Tom Riddle Deserves To Have His Story Told

They say every villain is the hero in their own story. Tom Riddle may have never aspired to be a hero, but he definitely wanted to be great. Harry Potter fans get a few glimpses into his mind and his past throughout the series, but it’s truly not enough, considering how fascinating the character is.

Truth be told, Harry Potter would have been even more interesting if told from Riddle’s perspective. He may have been evil, but his point of view would have definitely made the story psychologically engaging and intriguing in a way Harry’s simpler way of seeing things doesn’t.

9 Albus Dumbledore Manipulates The Course Of The Whole War

The headmaster of the Hogwarts School of Witchcraft and Wizardry, Albus Dumbledore may not be the protagonist, but he certainly acts like it from time to time. Even if Harry is the prophesied Savior of the Wizarding World, the only one who can actually go against Voldemort in battle is Albus. In many ways, Harry is only Dumbledore’s tool, and the war in the series actually takes place between Voldemort and Albus.

In the end, Harry follows exactly the path arranged for him by Dumbledore, even when it means going to his death. Perhaps it would have been better if Albus had handled the whole thing himself, instead of placing the burden on the shoulders of an orphaned teenager.

Harry’s mother, Lily only has a few appearances in the series, but without her, the victory against Voldemort wouldn’t have been possible. When Voldemort attacks the Potters, it is her sacrifice that shields Harry, creating a powerful form of protection that endures even years after her death.

However, many viewers have pointed out that the barebones concept doesn’t make sense. They have their own theories on Harry’s survival. A common interpretation is that Lily herself cast a different spell, one powered by her sacrifice. Either way, she definitely deserves to be acknowledged more. In fact, Harry Potter may not be her story but Lily could definitely star as a protagonist in her own movie.

If Lily’s sacrifice has so much worth, it is at least in part because of Severus Snape. The dour Potions teacher of Hogwarts has many flaws but he may be the most intriguing character in the series. He becomes a Death Eater after graduating Hogwarts, but his motivations are at least in part relatable, as he is severely bullied by the Marauders.

Snape’s friendship with Lily falls apart under the pressure of house rivalries but he never stops loving her. In many ways, Severus anchors the Harry Potter series, protecting Lily’s son despite his own personal misgivings with him. Neither good nor completely evil, he would definitely deserve to be a protagonist.

Tom Riddle may be Harry’s nemesis, but throughout his schooling, Harry’s opposite is Draco Malfoy. The two rub each other the wrong way from the moment they meet, and Draco’s arrogant swagger is part of the reason Harry refuses a Sorting in Slytherin, in the first place. Their rivalry gradually escalates during their time at Hogwarts, becoming deadly in Harry’s sixth year. During their duel in the bathroom, Draco attempts to cast the Cruciatus curse, and Harry retaliates with Sectumsempra, severely injuring Draco.

The incident signals just how out of depth Draco truly is in this war, as he never realized the true weight of serving the Dark Lord until he actually had to do it. In this sense, he would have made a great protagonist, particularly as he shows significant growth in the last part of the series.

See also  “Was Always Under Watch”: Arnold Schwarzenegger’s Younger Daughter Once Opened Up on Sister Katherine’s Bossy Attitude Towards Her

Long-term members of the Harry Potter fandom may be familiar with the strange case of Daphne Greengrass. A minor character in the series, Daphne is a Slytherin pure-blood in Harry’s year, best known for being the sister of Astoria. Viewers don’t even have a clear view of what she looks like, though a few candidates exist in the movies, including a blonde Slytherin girl who appears during Harry Potter and the Order of the Phoenix when Fred and George interrupt OWLs with fireworks.

Despite this vagueness, Daphne is one of the main characters in numerous fanworks. As she is a blank slate, fans love to use her to introduce their own spin on things. Many times, she is even a love interest for Harry. In canon, Daphne remains a mystery but based on fandom speculation, she may have already become a protagonist.

The charming and quirky Luna Lovegood is actually J.K. Rowling’s favorite character. It’s, therefore, a little baffling that she first appears in the fifth book. By then, Luna is already in her fourth year, one year behind Harry.

Her unique perspective on things clashes heavily with Hermione Granger’s fierce logic, but that just makes her more interesting. Despite being perceived as bizarre and called ‘loony’, she has a very comforting demeanor and remains unflappable even in the direst situation. She would have definitely made a brilliant protagonist.

3 Ron Weasley Struggles With Being Outshined By His Famous Friend

Harry wouldn’t have gotten far in his adventures without his friends Ron and Hermione. Harry and Ron meet on the Hogwarts Express and they are almost inseparable from that point on. Ron accompanies Harry on most of his adventures, while also providing him with a surrogate family in the form of the Weasleys.

Unfortunately, Ron’s own jealousy and insecurity can sometimes drive a wedge between him and Harry. It is Ron’s dream to be a protagonist, but he never manages that performance. It’s a shame as he has his fair share of qualities that make him an interesting character.

Ron may be Harry’s best friend, but it is Hermione who truly pulls the boys out of many dangers. Her intelligence always provides them with a solution and her infamous beaded bag—enchanted with an undetectable Extension Charm—is like a metaphor to its owner.

She always seems to hold all the answers while Harry just barrels forward, hoping for the best and pushing through his challenges through sheer determination and, occasionally, plot armor. Harry has his own merits and even outclasses Hermione in DADA, but many fans feel Hermione often steals the show and would have deserved to be the protagonist.

1 Neville Longbottom Could Have Been The Boy-Who-Lived

While Harry is Voldemort’s nemesis, this is in part because of Voldemort’s own choice. Two children actually suited Sybill Trelawney’s prophecy. Neville Longbottom was the second potential prophecy child. Voldemort picked the half-blood child over the pure-blood, but Neville could have easily been the Boy-Who-Lived. It’s also notable that, as characters, the two have a surprising amount of things in common. Neville’s parents are still alive but they suffer from permanent spell damage after being tortured by the Lestranges.

Neville was raised by his grandmother Augusta, but he is abused due to his relatives perceiving him as a near-squib. This makes him highly timid and shy in his early days at Hogwarts, leaving him practically friendless in Gryffindor House. But he definitely grows into his own in time, and he stands up to Voldemort during the Battle of Hogwarts, even killing Nagini.

Here’s who has quit Twitter since Elon Musk took over

Ruben Randall - September 23, 2022 0
Actress
Cobra Kai is a nostalgia trip for any fan of the Karate Kid film franchise, and so it’s not uncommon for a...

$450 Million Worth Arnold Schwarzenegger’s Son Once Did An Unbelievable Service...