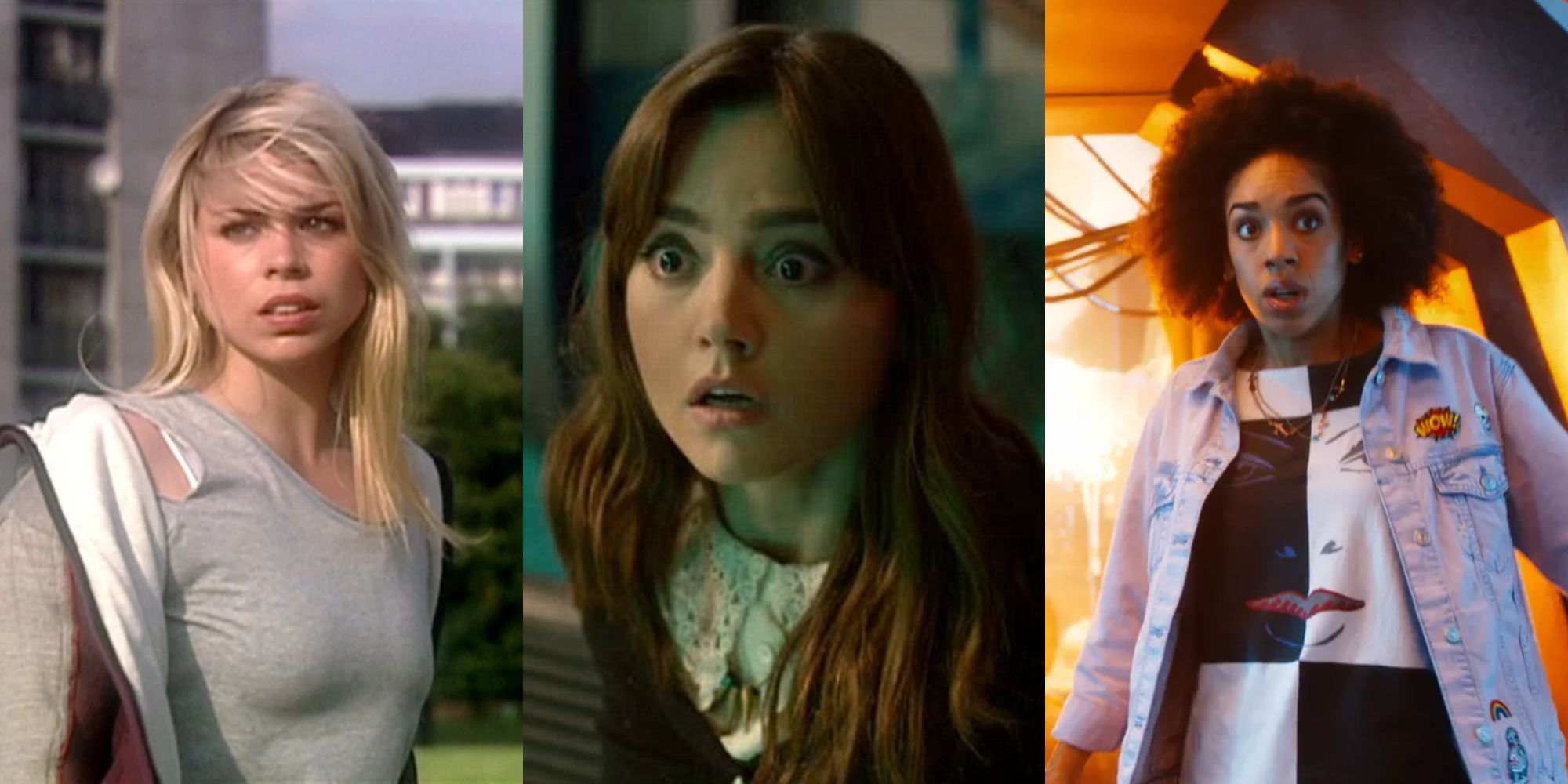 The Doctor’s companions are usually among the Time Lord’s most loyal allies, as they display a strong determination to help their friend no matter the cost. On some occasions, however, the Doctor’s usually trustworthy buddies have betrayed their trust, demonstrating a much darker streak during their interstellar voyages. Fans are speculating that Yaz could be the latest to turn against the Doctor, and her potentially problematic actions would place her in the company of a few past companions, who have also abused the eccentric time traveler’s confidence.

These friends of the legendary Time Lord have seemed somewhat deceitful in their behavior, with some of these companions appearing more surprising in their sinister conduct than others. Sometimes their dishonesty comes as a result of the Doctor’s buddies being manipulated by an outside force, however, occasionally their companions willingly betray their trust, questioning their reliability as mates to the time-traveling hero.

The Doctor has demonstrated a certain fondness for robots, having worked alongside robotic creations such as K9 and Gadget during their travels. Kamelion is one of the Doctor’s main robot allies, with the synthetic being having briefly traveled with his fifth incarnation. Despite possessing some truly useful shape-shifting abilities, Kamelion has shown to be easily misled by the Doctor’s foes, with the robot becoming influenced by various evil forces.

RELATED: The 7 Doctor Who Companions Who Were Most Unappreciated By The Doctor

Kamelion has been unwillingly controlled by the Master on a few occasions. “The King’s Demons” sees the robotic shape-shifter used by the Doctor’s scheming nemesis to prevent the signing of the Magna Carta in 12th Century Britain. Later, Kamelion is pitted against the Doctor again in “Planet Of Fire,” where he helps restore the Master to full power after the Master accidentally shrinks himself with the Tissue Compression Eliminator.

Joining the TARDIS in the 1983 serial “Madwyn Undead,” Turlough wins the Doctor, Tegan, and Nyssa’s trust, by helping the trio defeat the villainous scientist Madwyn. However, the Doctor’s apparently heroic friend is revealed to be conspiring with the Black Guardian, who’s seeking revenge against the Doctor.

This devious partnership sees Turlough agree to help the Black Guardian kill the Doctor, in exchange for his freedom, after being exiled to Earth by his people. His mission involves him committing a truly atrocious act, as he removes the TARDIS’s heart. However, Turlough eventually learns the error of his ways, turning against the Black Guardian while aboard the Buccaneer ship.

Meeting Rose during his employment at Henry VanStatten’s museum, Adam Mitchell becomes besotted with the kind-hearted young teen. VanStatten’s highly intelligent researcher is invited onboard the TARDIS following a terrifying Dalek encounter, but his time with the Doctor and Rose proves somewhat short-lived, as he betrays the pair’s trust during a trip to Platform Five.

Adam’s greedy desires see him attempt to send information on future technology back home, having been brought to the year 200,000 by his new friends. His selfish actions nearly change the course of human history, with his message threatening to accelerate humanity’s technological advancements before their time.

The Doctor and Adric have a somewhat strained friendship throughout the Peter Davison era, with the pair often coming to blows over Adric’s wish to return to E-Space. “Four To Doomsday” is a particularly testing moment in their relationship as buddies, with Adric choosing to side with Monarch against the Doctor.

RELATED: 10 Most Overlooked Doctor Who Companions, According to Reddit

The Time Lord’s rather naive companion is convinced that Monarch has good intentions, believing the villain’s claims that he wants to live peacefully on Earth. Adric’s loyalty to Urbanka’s cruel leader sees him disclose intel on the TARDIS to the maleficent being. However, after some wise words from the Doctor he regrets his mistake, and later goes on to sacrifice himself to save the Time Lord and his friends in one of Doctor Who’s most iconic scenes.

Tegan is one of the John Nathan Turner era’s most fondly remembered assistants, with many fans on Twitter excited to see her return in the Centenary Special. She appears a more reluctant traveler than past companions, with the bossy Australian often longing to return home. Tegan acts against her friends on a few occasions, both willingly and under the control of an outside force, providing an extra obstacle for the Doctor and his companions to overcome.

Tegan is possessed by the Mara multiple times, as the extra-terrestrial snake uses her as a host to gain physical form in the real world. She also tries to steal the TARDIS in “Four To Doomsday,” planning to flee from Monarch’s ship and abandon the Doctor and his friends in the process.

Joining the First Doctor on his interstellar voyages, Dodo becomes a firm friend of the Time Lord. The Doctor acts as a grandfatherly figure to the young woman during their exploits, which see them journey to various locations, including the Celestial Toyroom and the Wild West. However, Dodo’s final story involves her working against the Doctor, as she falls under WOTAN’s control.

“The War Machines”‘ gripping narrative showcases the wicked supercomputer’s unnerving grip over Dodo, as it enlists her in its plans to take over the Earth. Dodo assists WOTAN in locating the Doctor, who they plan to recruit to their cause of world domination, which the Time Lord vigorously opposes.

Featuring as the Twelfth Doctor’s companion, Bill Potts has worn some of Doctor Who’s best outfits. Alongside her exquisite fashion sense, Bill develops a strong friendship with the Time Lord, viewing the Doctor as a mentor figure. Despite caring deeply for her buddy, however, the university’s keen canteen chef is forced to stand against him, after the Doctor appears to have turned evil.

Incorrectly believing the Doctor has become the Monks’ spokesperson, Bill shoots her friend with a pistol. This shocking turn of events displays a sudden lack of faith from Bill Potts towards her friend, who is prepared to kill him to end the Monks’ enslavement of Earth. Fortunately, the Doctor survives her brutal attack, but Bill’s murderous intentions throw a cloud over her otherwise close relationship with the time traveler.

The Ninth Doctor appears a troubled figure throughout his run. Rose’s influence brings him a fresh new lease of life, however, with the unemployed shop assistant’s wide-eyed view of the universe helping him to move on from his deep trauma. However, while Rose acts as a positive aspect of this incarnation’s life, she also breaks the Doctor’s trust, changing history for her own gain in “Father’s Day.”

Paul Cornell’s deeply emotional episode revolves around Rose’s decision to save her father Pete, who was originally supposed to die in a horrific hit-and-run accident. While Rose’s choice may be well-intentioned, her rescue mission ignores the Doctor’s warnings about altering the timeline, causing Reapers to appear and devour a few of Jackie and Pete’s friends. The Doctor feels so betrayed by Rose’s actions that he nearly leaves her stranded in 1987, and some fans echo similar sentiments, believing that Rose Tyler got worse and worse during her TARDIS travels.

Clara Oswald develops an especially strong bond with the Doctor, traveling with both his eleventh and twelfth incarnations. However, while Clara normally demonstrates a great degree of affection for the Time Lord, “Dark Water/Death In Heaven” shows a more deceitful side to the cheeky school teacher, as she steals the seven TARDIS keys.

RELATED: Which Doctor Who Companion Is Your Soulmate, Based On Your Zodiac Sign?

While Clara’s motivations are understandable, as she plans to force the Doctor into helping revive her boyfriend Danny, her drastic actions are still reprehensible. Clara lets her friend down in the most horrible fashion, as she chucks the TARDIS keys into an active volcano, potentially stranding them both in a rather precarious location. Thankfully, this supposedly dangerous setting is revealed to be an illusion conjured by the Doctor, however, Clara is unaware of this fact, showing her surprising willingness to deceive her friend.

Jo Grant proves a valuable ally to the Third Doctor during his time working for UNIT. However, her first act as the Doctor’s new assistant sees her launch a vicious attack on the Time Lord and his UNIT colleagues, as she falls under the Master’s cold influence.

Jo Grant tries to destroy the Doctor’s UNIT laboratory, having been given a bomb by his arch-enemy. Although she performs these actions while under the Master’s hypnosis, it still comes as a shock to many viewers, with Jo’s scatterbrained personality making her seem the least likely suspect to blow up the Doctor’s lab.

NEXT: Every New Doctor Who Doctor And The Harry Potter Character Who Should Be Their Companion

Diaz: Goal Is To Beat Garcia, Then Haney To Get My Revenge; Then I...

Ruben Randall - September 3, 2022 0
TV/Movies
The Kardashians fans are shaming Kanye West for his behavior amid his latest social media tirade against Kim Kardashian and her family. ...

Mainstreaming Extremism: The Legacy of Far-Right Violence from the Past to...