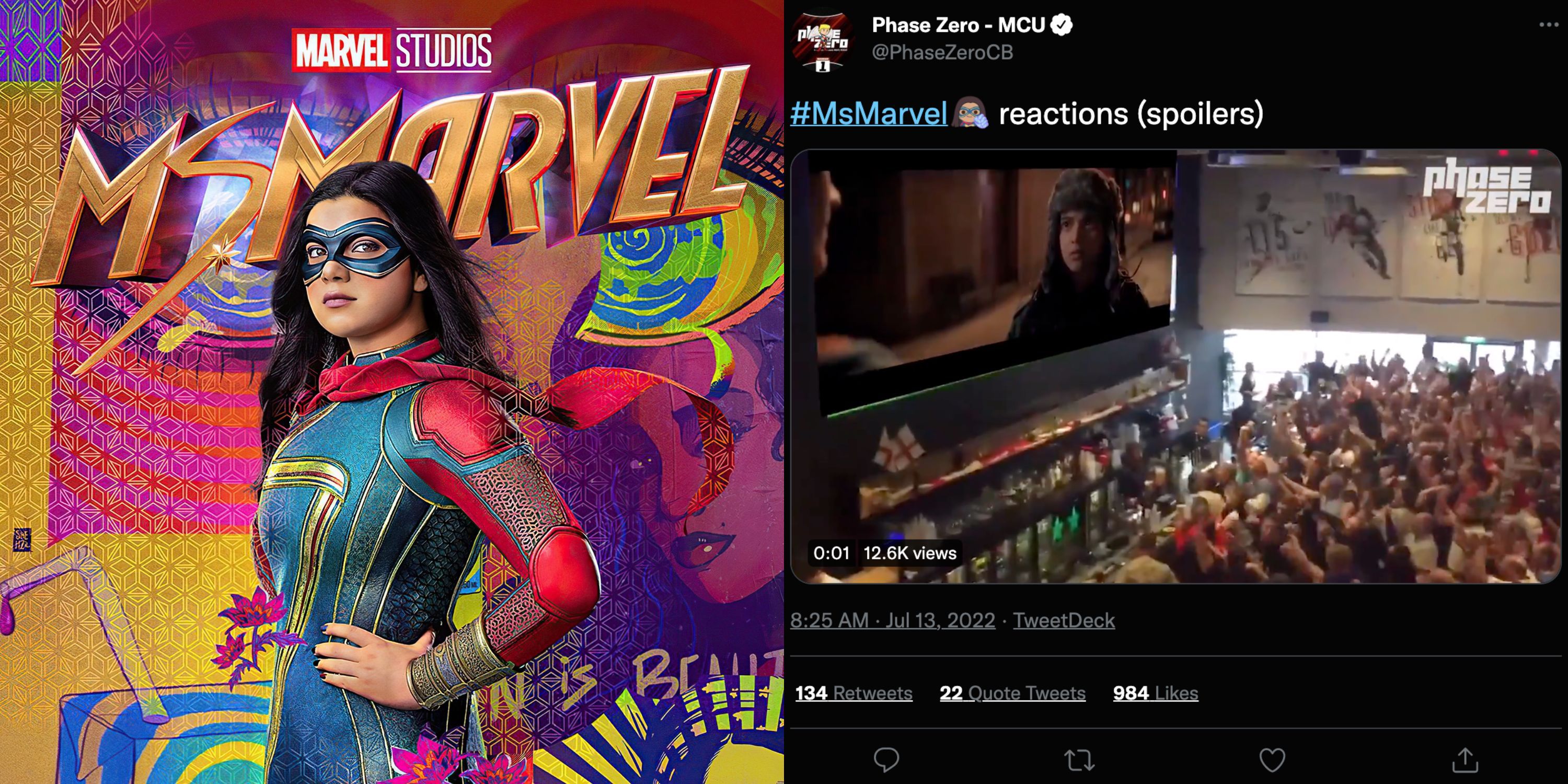 With Kamala making her final transformation a Muslin superhero, the Ms. Marvel finale marks an incredibly important moment in the history of the Marvel Cinematic Universe in more ways than one. The finale dropped a huge bombshell hinting about Kamala being a potential mutant and a shocking mid-credit scene with Kamala and Carol Danvers switching bodies.

Given that the show has received praises for its Muslim representation and captivating character, fan know that this is not the last they’ll see of Kamala Khan’s Ms. Marvel, who will return in the upcoming 2023 film The Marvels. Nevertheless, reactions to the finale have embiggened on Twitter with fans sharing their adoration and appreciation for the show, the characters, and what’s next to come.

From the very first sequence in the series premiere, Ms. Marvel stole audiences’ attention, and it never really loosened in massive grip. The show’s artistic visuals, incorporation of music, and energetic tone helped make it unlike anything else in the MCU. It is utterly dependent on what came before with Kamala framing her life around superheroes, but it is far from a regurgitation of the same formula.

There are many tweets like this one expressing gratitude for the quality of the show overall. Many fans are also remarking that the finale is one of the best yet in Marvel’s foray into television on Disney+. It will be very interesting to see how these characteristics will bleed elsewhere into the MCU in exploring this new reality after the events of Avengers: Endgame.

Iman Vellani, Star On The Rise

I just wanna say that I adored Kamala with all my heart through all this show, Iman played her to perfection and I treasured every moment with her on screen, can’t wait to see her in The Marvels and more future adventures ❤️❤️❤️ #MsMarvel pic.twitter.com/obuyARdjSW

One of the biggest reasons Ms. Marvel has received such a delightful response from fans is the expert casting of Iman Vellani in the titular role. Kevin Feige and the team at Marvel Studios have set a very high bar for themselves in that regard, and they hit it out of the park by picking Vellani. She perfectly emulates what makes Kamala such a groundbreaking and fan-favorite character.

Via an interview at the Tonight Show Starring Jimmy Fallon, Vellani herself is a vocal MCU fan – with her claiming Robert Downey Jr’s Iron Man as her favorite – and frankly, it’s exciting knowing that she will rightfully receive the same treatment from fans around the world. She has a very bright future ahead of herself in the MCU, and hopefully outside, too.

As a superfan unlocking her powers, Kamala was workshopping who she would be as a hero. For most of the series, she had to settle for being called Night Light as coined by the public, but she finally takes up the moniker Ms. Marvel. It’s all from the beautiful conversation with her father, Yusuf explaining the origins of her name.

Of course, this all goes back to the character’s creation and the deliberate choice to name her Kamala. It was seeded earlier in the series when it’s remarked that Kamala was a unique name, and it lands so beautifully in the finale. With a name like Ms. Marvel, she can get some attention worldwide and maybe even get her own great merch like what was shown at AvengersCon.

Protect The Khans At All Cost!

#MsMarvel spoiler
.
.
.
.
.
.
Kamala’s suit was HANDMADE by her mother! How sweet and heartwarming is that! (tbh this scene gave me teary eyes, and so did the “our little Miss Marvel” talk at the end🥹) pic.twitter.com/t5bYoxUj5s

What really sets Ms. Marvel apart is that the superhero aspect is actually supplementary to a great foundation for a show. If it was taken away, they’d still be left with a compelling story about a teen unsure of her future surrounded by loveable friends and family. All generations of the Khans are incorporated as important parts of the show, and her Pakistani heritage plays a part of journey to become Ms. Marvel.RELATED: 12 Best Easter Eggs & Hidden Details In Thor: Love and ThunderKamala’s family easily establish themselves as some of the best secondary character in the MCU. The finale solidified that when Muneeba shows Kamala the suit she made for her – something fans thought would happen after she made the Hulk shirt in the premiere. Muneeba’s journey across the show was unexpected, but something fans wouldn’t dare give up.

She Did The Thing!

Even before the series premiere, fans were exceptionally concerned with Ms. Marvel since it was revealed that Kamala’s powers and origins would be altered. However, as shown in reactions to the first episode and the big fight in the finale when she utters her catchphrase, “Embiggen!”, those concerns were largely unwarranted.

She can still stretch and grow like she does in the comics, but it’s enhanced with a cosmic or magical aesthetic. This decision clearly connects her even more with her idol, Captain Marvel, and now fans know that Marvel is using Ms. Marvel as the catalyst for major changes to the MCU.

They Said The M Word!

It’s official – Kamala Khan is the first mutant in the MCU. That’s to say this was the first instance in which the word “mutation” was uttered in the franchise in this way. For years, it was off-limits. When Wanda and Pietro were introduced in Captain America: The Winter Soldier’s post-credit scene, they were called miracles. However, now that Marvel has reacquired rights to the X-Men, Ms. Marvel set the stage for their impending arrival.

This moment was already remarkable, but avid fans recognized the X-Men ’97 theme song was in it, too. This was like an easter egg in Doctor Strange in the Multiverse of Madness when it was also used when Professor X cameoed. This was something fans had been waiting years for, and they never expected to happen in Ms. Marvel, which just makes it all the greater. Hopefully, Marvel will announce when the X-Men film will come at Comic-Con.

Sorry To This Man

Throughout Ms. Marvel, they were laying the breadcrumbs for a reveal like this, but viewers familiar with her story in the comics were likely expecting Bruno to say inhuman rather than mutation. Of course, the choice of changing Kamala into a mutant puts any hope for the Inhumans in the MCU safely to bed. This was not all that unexpected. The ABC series, Inhumans, was very poorly received by fans and critics alike.RELATED: 12 Best Twitter Reactions After Watching Doctor Strange in the Multiverse of MadnessHowever, Anson Mount’s reprisal in Doctor Strange in the Multiverse of Madness did reinvigorate some interest in their return. He and the Inhuman Royal Family are important and foundational figures in the comics, but it seems like they will not be back in the MCU – at least not without some major alterations – anytime soon.

It was really looking like Najma and her group of exiled djinn were being set up as the series’ main antagonists. That was until the penultimate episode when they all ended up dead. With their absence, Damage Control stepped in to fill that role. Agent Cleary returned for Ms. Marvel after being introduced in Spider-Man: No Way Home, and he was joined by Agent Deever, who ended up really becoming the antagonist.

There were a few fan theory about Ms. Marvel that Damage Control would be involved in the final conflict. Interestingly, there is some internal turmoil they need to deal with – showing that their story is just beginning in the MCU. Other theories have popped up since, including the one tweeted here. Enhanced by the mutant reveal, it looks like Damage Control could become the next act of superhuman registration or even the Sentinel program.

Ms. Marvel already ended perfectly, but then in MCU fashion, it returned with a mid-credits stinger, and this one made the finale even better. In setting up The Marvels, Brie Larson appeared as Captain Marvel, but the manner in which she did is what makes it so exciting. Fans had hoped she and/or Teyonah Parris would cameo, but they likely expected it to be in a stinger in which they recruited Kamala. Viewers likely didn’t expect this scenario.

It seems like Kamala has switched places with Captain Marvel. This could mean that The Marvels will answer questions regarding Kamala’s bangle – perhaps Carol found the other one which is what caused them to switch places. However, there is some confusion as to whether Kamala transformed into Captain Marvel, as she did when she first got her powers in the comics. Only time will tell.

Wake Me Up When The Marvels Arrive

On top of the stinger, the episode ends with the classic “Ms. Marvel will return in The Marvels” and fans can’t wait. The movie is already shaping up to be an exciting sequel to Captain Marvel, bringing together Carol Danvers, Monica Rambeau, Kamala Khan, and maybe more. Kamala’s family will be returning, and they certainly have plenty to talk about now that Captain Marvel has suddenly appeared in their home.

The wait might be long, but at least there’s a date in sight. The Marvels is set to arrive in theaters on July 28th, 2023. San Diego Comic-Con is up next, and Marvel Studios will return for this year, which could bring more buzz and updates about the upcoming movie.NEXT: 10 Underrated Or Obscure Heroes Who Should Join The MCU


Bradley Prom is a senior writer and alumna of University of Minnesota – Twin Cities currently living in Los Angeles with a deep love and appreciation for the movies, television shows, video games, books, and stories that have inspired and provoked him throughout his life. He grew up on Star Wars, Justice League, Jurassic Park, Pokémon, Spider-Man, Harry Potter, and Avatar the Last Airbender – to name a few or seven. Now inn adulthood, his passions and tastes have evolved to include other fantastical tales, reality tv, and comedy. He enjoys engaging with fellow fans through theorizing, instant reactions online, and different deep-diving podcasts.
As a member of the LGBTQ+ community, Bradley has a great appreciation for queerness in all forms throughout all facets of entertainment and modern culture. He hopes in developing his own stories and shows, he will help see such representation grow and evolve beyond boxes to check.

Ruben Randall - November 25, 2022 0
Money
Part of the fun of watching any Real Housewives series is following along with your favourite Housewives online and watching the drama unfold on...

Why Sister Wives’ Kody Gets Trashed For Money Talk About Christine