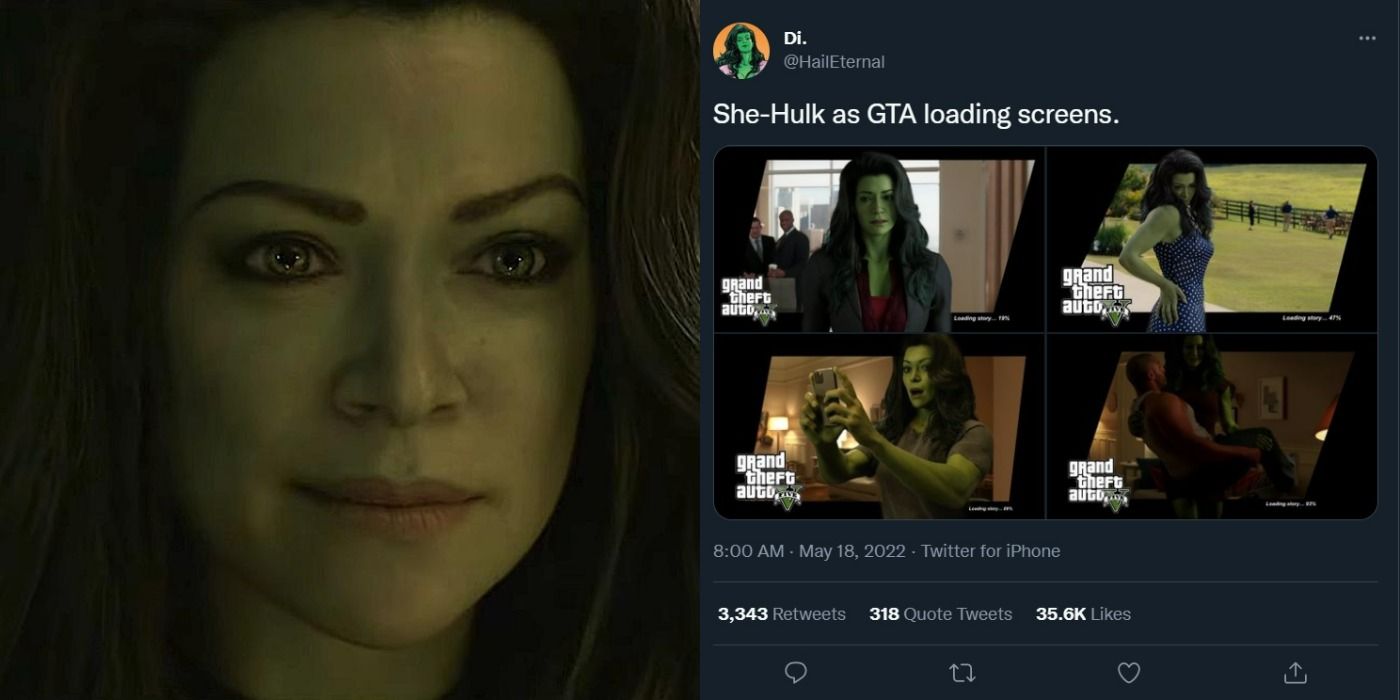 She-Hulk: Attorney at Law is one of the most anticipated Disney+ shows, and Marvel Studios finally dropped the first official trailer early this week. Set to premiere on August 17, the upcoming series will introduce attorney, Jennifer Walters, undergoing her transition as She-Hulk.

Considering the dark twist and turns in the MCU thus far, the She-Hulk trailer takes a refreshing vibe and humorous and lighthearted tone. While the trailer has unveiled the first looks of She-Hulk and other character appearances, it has received mixed reactions from fans, from those loving Tatiana Maslany as the buffed superhero to criticism of the graphics.

With the MCU finally taking off in 2022 with Moon Knight and Doctor Strange in the Multiverse of Madness, many people wondered about She-Hulk. There was little to no update until the trailer unexpectedly dropped. Of course, many Marvel fans like @wandasolsen shared their excitement, quoting that “She-Hulk’s time has finally come.”

This exhilaration is readily apparent as the MCU phases into a new chapter with the multiverse and cosmology. Furthermore, She-Hulk joins a set of newly introduced groups of female characters to further expand on the diversity and inclusivity in the MCU.

Although Marvel fans are happy to see the new footage of the up-and-coming buffed superhero, many cannot ignore the imperfections regarding the horrendous CGI. Many people like @sagehyden compared the terrible execution of the CGI to the Scorpion King from The Mummy Returns.

There is no denying that the CGI of She-Hulk looks incomplete and out of place, with her features looking misaligned and not well blended. Unfortunately, the flawed CGI remained a talking point on Twitter, with many baffled by the lack of effort by the visual effects team to do justice to her graphics.

The She-Hulk trailer does not miss a beat with its positive and humorous energy, as several moments emphasize how society has accepted the green and strong superheroine. Of course, this upcoming MCU show is one of the most important series to release on Disney+. While superhero life is not always easy, it has not stopped Jennifer Walters from pursuing her dating life either.

The final moments show Jennifer going on several dates for a fun and hilarious sequence. Of course, some fans like @Kid_Kinobi teased this scene of She-Hulk carrying her date, stating that She-Hulk “knows its target audience frighteningly well.”

Tatiana Maslany was the perfect casting for She-Hulk

Despite some criticism of the visual effects and graphics, the one positive takeaway from the trailer is that Tatiana Maslany was made to be She-Hulk. As remarked by @therealsupes, Maslany appears to embody the charisma of the attorney and superhero, even deeming it a “perfect casting.”

Of course, Maslany gained prominence in Orphan Black, in which she portrayed multiple different clones, all with unique personalities. Her breathtaking performance earned her an Emmy award and is what put her on the Hollywood map. Therefore, it comes as no surprise that fans are excited to see Maslany bring the character to life and will deliver on the character’s potential.

Considering the immense criticism of CGI, many Marvel fans have tried to defend the poor work with the explanation that the visual effects and graphics are not yet complete. Furthermore, the series does not drop for another four months, with many believing that gives the VFX team enough time to fix the visual errors.

Twitter user @eIixirgenius weighed in on the CGI debacle by comparing the situation to Sonic The Hedgehog, another franchise that had experienced a similar graphic condemnation in 2019. The user hilariously remarks that Marvel Studios will eventually fix the graphics and listen to the fans about She-Hulk’s muscular figure (given the lack of it), hopefully just in time before its premiere.

Nevertheless, many Marvel fans have tried to make light of the CGI flaws by turning them into memes or reinventing the scenes for other purposes. For instance, Twitter user @HailEternal reimagined the poor design by adding a Grand Theft Auto loading screen for fun.

Of course, the efforts to create these screens are remarkable and even blends in with the chosen scenes. Furthermore, the redesign with a GTA loading screen amplifies the CGI itself that eerily meshes well with the graphics from the video game.

Like any trailer drop, many fans examine the details to find hints and clues about the Marvel series. She-Hulk was no exception, as Twitter user @3CFilmss took notice of this intriguing scene with the Abomination.

The user appreciates the attention to detail when “Marvel brings stuff full circle,” especially referencing small moments from previous MCU movies and TV shows. In this case, this She-Hulk scene shows the Abomination in a cage that resembles the one in Shang-Chi. Indeed, not only is it a “full circle,” but the consistency in the small details is well-done.

The MCU Has Good Lawyers

Even though the series will not drop for another few months, the trailer does emphasize Jennifer’s career as a lawyer, hence the Attorney At Law title. The She-Hulk teaser reveals that Jennifer was assigned to the Superhuman Law Division.

Twitter user @murdocklovebot did not miss this opportunity to address the number of talented “good lawyers” in the MCU with images of Jennifer and Matt Murdock. Of course, Matt Murdock, AKA Daredevil, has finally marked his presence in the MCU after appearing in the Spider-Man: No Way Home as Peter Parker’s lawyer. Furthermore, some She-Hulk fan theories suggest that the blind attorney could make a cameo, leaving many fans excited for a potential meet-up between lawyers.

One of the fun trailer moments has been the chemistry between Bruce Banner and Jennifer Walters, considering they are cousins. It likely explains the circumstances of her Hulk-like abilities, where at least in the comics, Bruce uses his DNA to save Jennifer from an accident.

One Twitter user, @PapaKoalaYT, noted the sequences between the cousins are packed with banter and support, especially as Bruce almost killed Jennifer for experimentation. Of course, Marvel fans can only expect more of the loving cousin bond in the series, especially given the humorous tone of the trailer. Furthermore, the She-Hulk trailer reveals that Bruce Banner could be a major player in the series.

Perhaps, one of the funniest reactions to the trailer has been the constant comparison to another franchise starring green-fleshed creatures, Shrek. Twitter user @FreyaSenshi hilariously pokes fun that She-Hulk is essentially a “Shrek spinoff to fit in the MCU.”

Of course, She-Hulk’s looks have been juxtaposed to the physique of Princess Fiona, who not only graces as a princess but can also kick butt in a fairy tale world. Furthermore, the trailer has highlighted the public’s obsession with She-Hulk’s incredible beauty, especially as her features remain a talking point among Marvel fans, albeit with a mixed reception.

NEXT: 9 Biggest Questions We Have After The She-Hulk Trailer

Kraven the Hunter Star Teases Differences From Past Marvel Movies


Based in South Florida, Fariba Rezwan is a list writer for CBR and Screen Rant. Though working on her graduate degree at the University of Florida, her science education does not take away her love of movies and TV shows. She is a huge geek and considers herself a huge fan of many fandoms, including Star Wars, Marvel, Game of Thrones, Supernatural, and many more. Expect to see her watch movies on the first day they come out. While she will watch any film, she especially likes superheroes, mysteries, sci-fi, and thrillers. However, since she is in her early 20s, she also takes the time to educate herself about cinema by watching classics and well-received films. While she aspires to become a physician one day, she also hopes to try out screenwriting during her spare time.

20 Things Wrong With The Malfoys Fans Choose To Ignore

Ruben Randall - April 9, 2022 0
Money
Levi's and Tequila Don Julio present the glorious return of the Neon Carnival for its 11th year as the festival's most coveted after-party and...