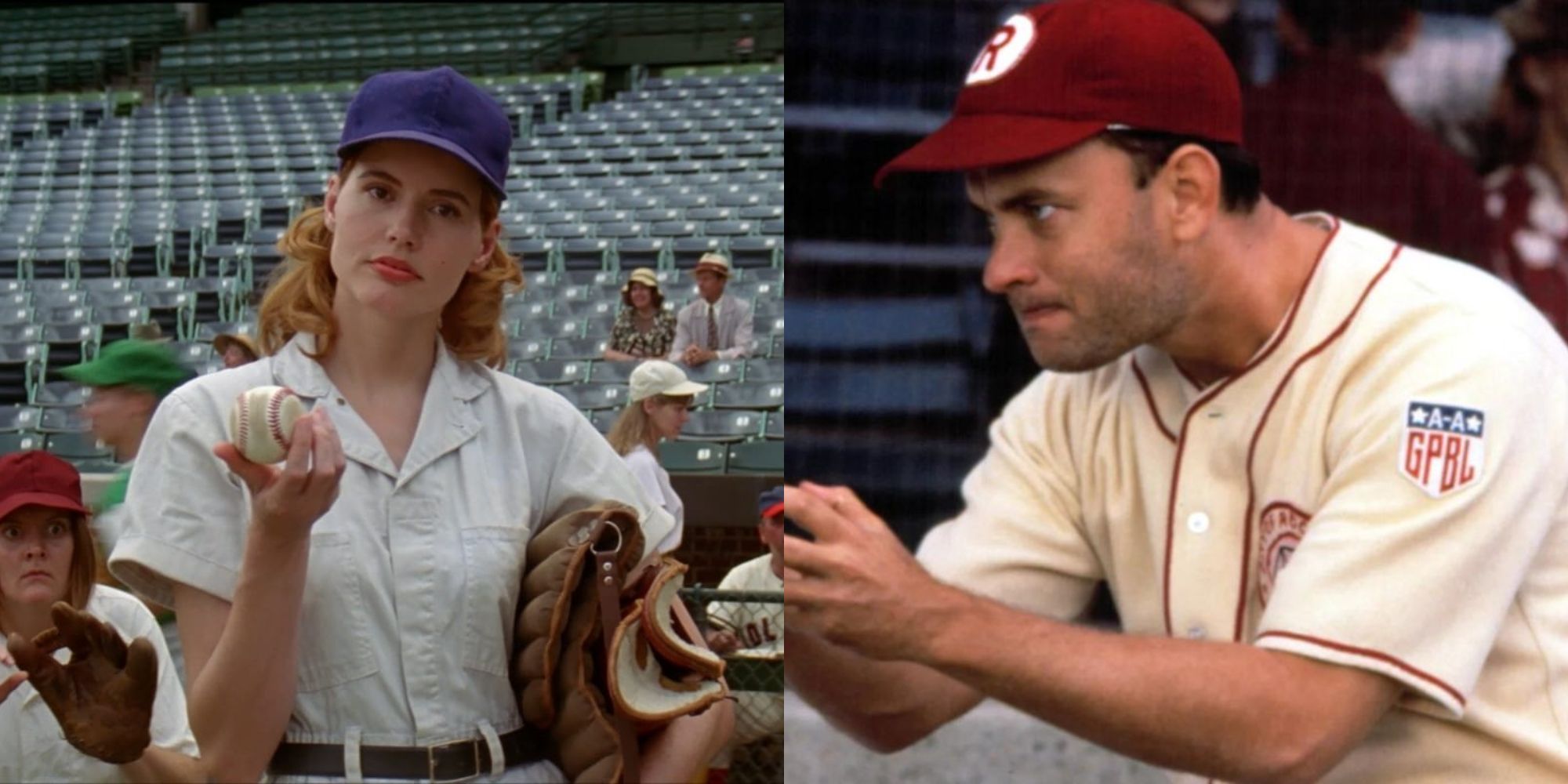 The recently released Amazon comedy series A League of Their Own has already garnered great reviews. The series is written by and stars Abbi Jacobson, who gained comedic success with her hit show Broad City. The series follows the All-American professional women’s baseball league as they grow to become close friends and better players. However, this story has been told before by director Penny Marshall. The 1992 film of the same name starred Hollywood heavy hitters Gina Davis, Rosie O’Donnell, and Tom Hanks.

The movie is a classic representation of how reliant and hardworking women are, a message that still holds weight today. The juxtaposition of playing baseball while taking etiquette classes is comical while also making a comment on the expectations of women at that time. The performances in the film are legendary, having some great one-liners that make it quite a memorable piece of pop culture.

Not exactly the sympathetic coach, Jimmy Dugan, played by Tom Hanks, doesn’t take the sympathetic approach to coaching. When one of The Peaches’ outfielders makes a throwing mistake, not only does her mistake get under his skin, but her emotional reaction to his criticism does as well.

One of the movie’s most recognizable quotes, it is hard to imagine any other actor delivering such a line. As American as baseball itself, Tom Hanks has been one of Hollywood’s leading men since the 1990s. His character while painstakingly selfish in his start as the coach, his comedic timing immediately makes him a likable and charming character.

A quote that might go a bit unnoticed is hilariously memorable. Kit Keller has joined The Belles, playing against her big sis, who continues to play for The Peaches. In the World Series, Kit scores a homerun when it was almost sure The Belles would lose the game. The PA announcer gets a jolt of energy from the excitement of the winning play.

The announcer’s excitement juxtaposes the disappointment of The Peaches’ loss. Additionally, in this scene, tensions between Kit and Dottie can cut a room in half. It’s clear they have become so much more competitive with each other, and just when the stadium is sure Dottie’s team will take the win, the underdog’s triumph has the crowd wild with elation.

When The Peaches make it to the playoffs, the excitement is electrifying. There are reporters, and the stadium is packed full. “All the Way Mae,” played by Madonna, is one of the biggest personalities on the team and has made her nickname in the league synonymous with that personality and attitude.

Often regarded for her reinvention and mark on popular culture, Madonna is the perfect Mae. This quote comes at a perfect time in the film, as the audience has already seen that she is, in fact, the attitude of The Peaches. Unapologetically herself as the cultural pop icon, this quote solidifies that likeness in her character.

7 “Well, I Could Certainly Use The Money.”Jimmy Dugan

Taking place at the end of the first game, the head of marketing for the league approaches Jimmy in the dugout. During the conversation, Jimmy spits out a shockingly huge wad of tobacco, and in complete rhetorical curiosity, Jimmy is asked if it’s possible for him to be more disgusting if he were paid more.

Played by the incomparable Tom Hanks, Jimmy’s gives a response proves he heard only what he wanted to hear, making it utterly clear he’s only there for the money. Jimmy’s only change in his arc is that he learns to put a little more faith in his team, having more interest in his role than a paycheck.

6 “Well It Would Bruise The Hell Outta Me.”

Fluent in biting sarcasm, Ernie Capadino, played by Jon Lovitz, is the baseball scout who convinces Dottie and her sister to join an all-women’s baseball league. Finding them on their hometown farm in Oregon, Capadino informs the sisters about the efforts of Walter Harvey’s, who owns the Chicago Cubs, efforts to revive the sport during WW2.

RELATED: Where You’ve Seen The Cast Of A League of Their Own Series Before

Jon Lovitz is well acclaimed for his work in comedy, specifically Saturday Night Live from 1985-1990. His quips and quick responses in A League of Their Own easily show off his comedic skills and get the movie started with full belly laughs to accompany the heartwarming story.

The son of a player on The Peaches has to join on the road as they travel from game to game. Promising her coach that he is the sweetest boy, the team quickly sees that he is just a pest, and the players have had enough. When the child covers the bus driver’s eyes, nearly causing them to crash, Mae chases him around the bus with a bat.

While chasing around Mae to stop her from hurting the child, Doris ironically offers a different solution to the problem. Rosie O’Donnel has some of the best lines in the movie, showing off her brilliant comedic delivery.

4 “You Got Yourself In The League, I Got You On The Train.”

In a tender moment after Kit wins the World Series after being traded to The Belles, she meets Dottie in the locker room. Having been compared to Dottie since the beginning of the film, Kit is finally able to let go of the rivalry that has kept their relationship rocky and meet not as rivals but as sisters.

Kit wanted nothing more than her independence and recognition for her skills. When she has finally found fame and recognition as part of The Belles, Kit still credits her big sister for her chance to be in the league. Dottie has known from the start it was Kit’s own reliance and hard work that got her there.

3 “Ya Gotta Go Where Things Happen.”

In a triumphant try-out, Marla has made it in baseball scout Ernie Capadino’s good graces. Her dad raised her on his own, and she is the apple of his eye. While sitting in the train station, waiting to depart, Marla is scared of leaving home.

RELATED: 10 Best Movies About Baseball, According To Letterboxd

The love and support that Marla’s father gives her is truly one of the most heartwarming things in the film. Knowing this is what she dreams of and aware of the opportunities that lay ahead of her, this quote might hit home to many audiences.

2 “The Hard Is What Makes It Great.”Jimmy Dugan

When Dottie’s husband returns from the war, she reluctantly but deliberately decides to go back to Oregon with him. Jimmy isn’t initially aware of this decision and is rightfully upset, as he sees her departure as an easy way out of something worth working hard for.

Dottie, a talented ball player and loving wife, had always believed she was joining The Peaches for her sister. She never let herself realize it was a passion of hers rather than a duty to her sister and country. While Hanks plays a washed-up coach, his character has grown to truly support the team and Dottie. When he learns of her choice to leave, he won’t take no for an answer.

1 What Do You Think We Are, Baseball Players Or Ballerinas?”

The try-outs have finished, cuts have been made, and the lists for the teams have been posted. The women are beaming with excitement as a team manager gives information on how the league will operate. Each bit of his speech is followed by cheers until the women are informed of their uniforms, which are jerseys tucked into mid-thigh skirts.

This quote gives insight into how women were still not taken seriously in sports at this time. Both Rosie O’Donnell and her character Doris are recognized for quick quips and brash comedic style. This line is a great example of that while also bringing light to how the women are ready to step out of the stereotypical norm and be treated like real ball players.

Next: 10 Best Shows On Amazon Prime Video This Month

AJ Michalka Returns To ‘The Goldbergs’ For Bachelorette Party with New...