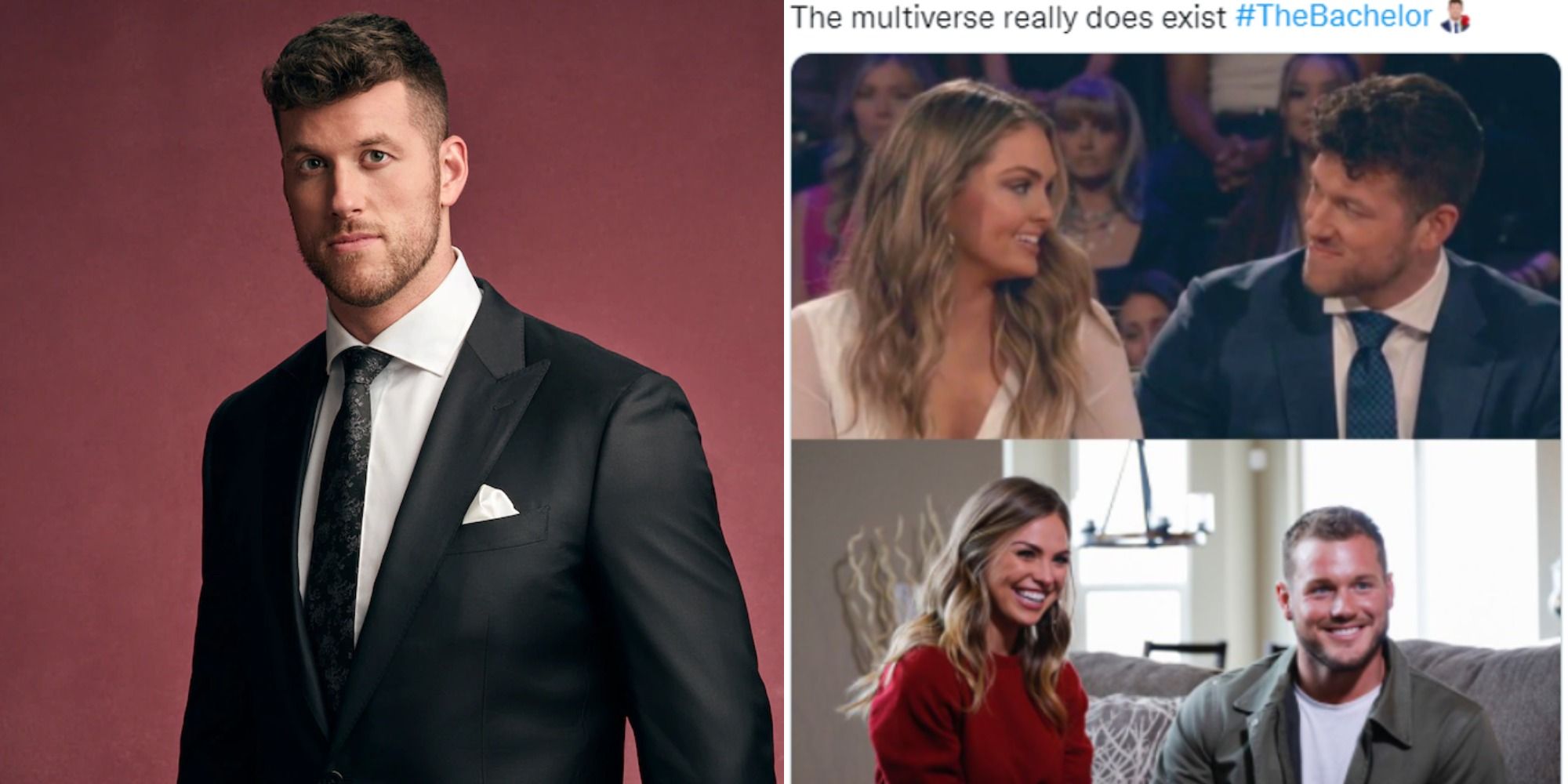 Warning: This article contains spoilers for The Bachelor.

Clayton’s season of The Bachelor was one wild, bumpy ride, which all came to an end in a two-part finale with live interviews and an exhilarating “After the Final Rose.” While it turned up to be an overall happy ending for multiple parties by the time this season wrapped up, a lot of drama, shock, and heartbreak took place in the process.

Related: The 10 Best Couples To Come Out Of Bachelor In Paradise, According To Reddit

Seeing fans of The Bachelor, or “Bachelor Nation” as the franchise calls them, react to the show in real time is one of the best parts of watching the show. Since there are live elements to the show, it makes the live tweeting all the more fun to watch. Viewers can enjoy the memes that fans came up with as the final episode of Season 26 aired.

Clayton made a series of controversial decisions in both parts of the finale with how he treated both Gabby and Rachel. He put them through an emotional ringer and asked them multiple times to stay and trust in what they had only to ultimately turn right back around and break up with them at the same time instead of honoring them as individuals at the very least.

While Clayton’s thoughtlessness is infuriating to watch in the show, seeing it represented in this hilarious Leo meme is so satisfying. The tweet by @sad_oat  hits the nail on the head. It really depicts the lack of understanding on his part and presents it in a more palatable way.

Fans of reality shows like The Bachelor will never fully understand the dynamics of the relationships portrayed on the show since so much of the real stuff happens off-camera. That said, it can be hard to know based on what is shown in the episodes if the couple in the end is worth investing in or not.

That is why this tweet by @BrettSVergara  is so perfect. It sums up not knowing what to say or think while also implying that fans might not have been listening while shocked or emotionally exhausted from a rollercoaster of an episode. People might have felt some whiplash from the back and forth love story.

See also  ‘The Kardashians’ Episode Two: 3 Things That Kept Me Up

This Is What Dreams Are Made Of

Have you ever seen such a beautiful announcement? After watching Gabby and Rachel break into tears and feel so betrayed scene after scene, “After the Final Rose” ended with the news that Gabby and Rachel are both the next Bachelorettes. While fans are confused about the logistics, everyone is excited for both women to find the love they deserve.

Related: 10 Flaws In The Bachelor Franchise That Fans Choose To Ignore

This meme from @liljulsie  with a shot from The Lizzie McGuire Movie is perfect for so many reasons. A decent portion of the fan base grew up with Lizzie McGuire, Hilary Duff appeared on Clayton’s season, and most importantly, this is an image of the power of female friendship and two queens (even one blonde and one brunette) being a team without the man who hurt them.

Can I Get Your Number?

Throughout the entirety of The Bachelor Season 26, Gabby was one of the most expressive women in the house and made some of the best facial expressions, no matter how she was feeling. While no viewers enjoyed seeing Gabby mistreated by Clayton, her looks of disgust she rightfully threw his way have given the internet an abundance of meme-able moods.

Clearly @yeahitsmefab found Gabby’s expression relatable. While Gabby didn’t like not recognizing the man in front of her after dating him for several weeks, many people feel the same level of disgust when being approached by a stranger in public. Surely many fans can relate to a time of making this Gabby face.

After such a disastrous finale for both Gabby and Rachel, many fans of The Bachelor likely felt protective of these women and wanted to see them get a happy ending for themselves after being so mistreated. Of course, to keep Bachelor Nation on their toes, the new host Jesse Palmer announced that the next Bachelorette wasn’t Gabby and wasn’t Rachel.

Several commercial breaks and additional segments later, Jesse Palmer finally announced that the next Bachelorette wasn’t Gabby and wasn’t Rachel because it is Gabby and Rachel together. The purposeful confusion doesn’t really make sense and comes off as a thin attempt at a misdirect, but this tweet by @flight2themoon perfectly captures the general audience reaction.

Thanks to Marvel and movies like Spider-Man: No Way Home and the upcoming Doctor Strange in the Multiverse of Madness movie and TV fans have enough general multiverse knowledge to identify one when they see one. All season long, there have been fans comparing Susie to former Bachelorette Hannah Brown.

Fans have also made connections between Clayton and former Bachelor Colton Underwood. In addition to similar first names, both men are former football players, and both ended their seasons by breaking up with two women to prevent their love from leaving. While Hannah and Colton were not the final couple, the resemblance is uncanny and @tvhottakes1 is onto something.

I Need A Break

Ever since The Bachelorette Season 16 safely began production, The Bachelor franchise moved very quickly to deliver fans the content that had been missing during the time they had to pause. Between seasons of both hit shows and one season of Bachelor In Paradise, fans have only gotten a few weeks of break at a time in between seasons.

While the schedule of constant content was somewhat exhausting for Bachelor Nation, it was also something that fans came to expect. Now, the franchise has announced that the next season will premiere in July and fans are not sure how to feel now that there are four months to wait. This tweet by @TheBachBabes sums up the feeling for many.

The image on the left is easily one of the most meme-able moments of the season when Rachel reached out to Gabby, thankful she would not be standing alone in the end to deal with the high stress of the final rose ceremony. It’s a recognizable feeling, and also a moment when fans began to see a real connection between the two during what they were going through.

Everyone loves a good “How it started/ How it’s going” meme and this one by @BachelorBob_ captures how many fans feel about the two Bachelorettes they cannot wait to watch. From that most dramatic rose ceremony to the celebration on the “After the Final Rose” couch, fans have enjoyed seeing these women look out for each other and celebrate each other.

Rachel’s Dad became a quick fan favorite during the hometowns episode of The Bachelor Season 26. Even though Rachel had warned Clayton that her dad was tough and may be harsh, Tony seemed to keep his cool and seemed most interested in going off of Rachel’s feelings.

While he’d once given Clayton his approval in the famous pat on the arm moment, he then had to watch the crushing finale as part of the live studio audience and watch the man who mistreated his daughter sit happily on the couch. The Bachelor producers including a Tony reaction cam here and there, knowing fans would want to see, and this meme by @bachbabyyyy is not far off.

Once again, fans have drawn similarities between Gabby and Rachel and another blonde and brunette duo who rose above the man who hurt them to become friends in the end. This time, it’s Elle and Vivian from Legally Blonde. Before the season ended, fans were already comparing Clayton Echard to the infamous Warner, and hoping for this type of ending.

While Clayton ultimately did not end up alone like Warner does, Gabby and Rachel still got a triumphant ending full of friendship and loving support, and fans cannot get enough of them and their pure excitement to go on their Bachelorette journeys together side by side. @haleeey_c picked the perfect image to make the comparison.

Next: 10 Bachelor Couples Reddit Users Changed Their Minds About


Kimberly is a freelance writer based in Chicago who has a passion for all things entertainment. While comedies are her favorite and reality TV is her weakness, she enjoys a little bit of everything. When she’s not writing or traveling, you can catch her on the couch with her dog, her cat, and her fiancé who helps her branch out into a variety of genres.

God has gifted me pace and that’s bringing me the love of people around...