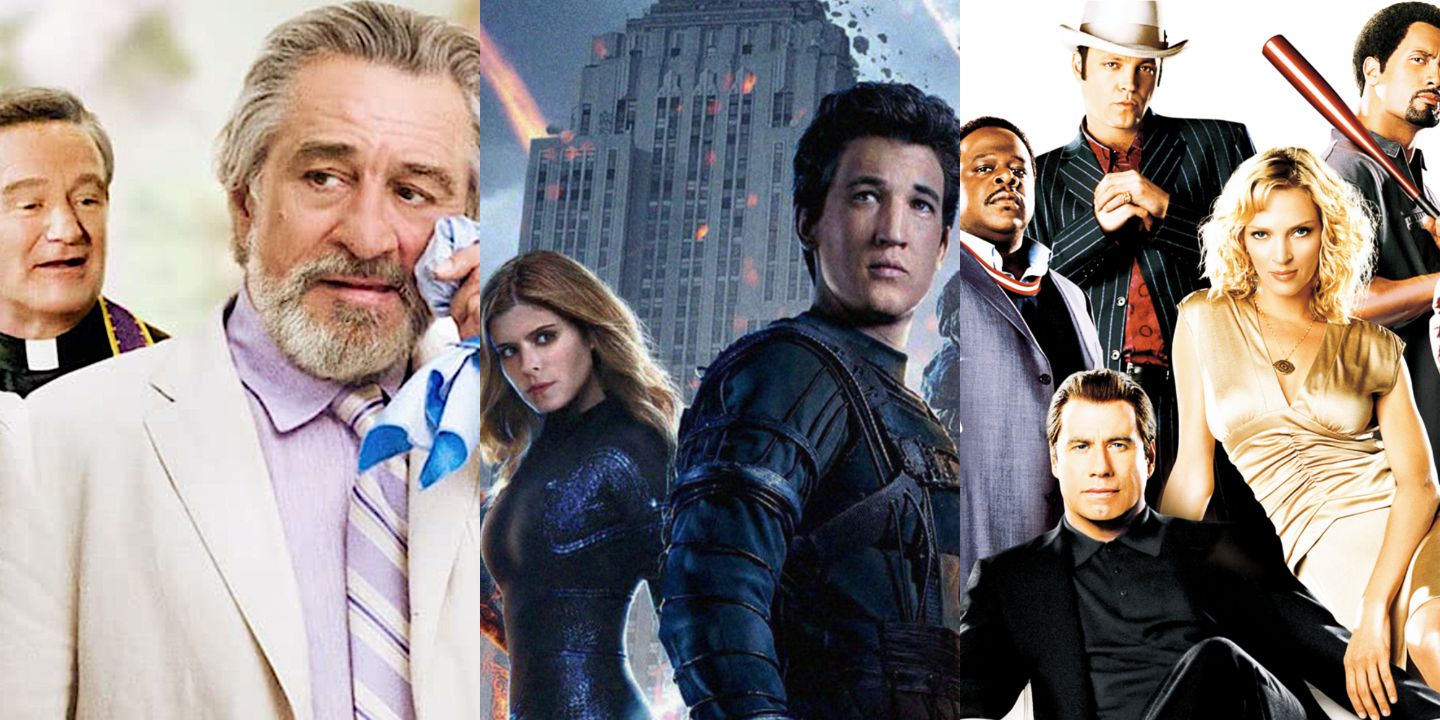 From Thor: Love & Thunder’s choice of Christian Bale for its villain to the return of Sigourney Weaver in the upcoming Avatar: The Way of Water, Hollywood studios clearly understand that great casting is as important to a film’s success as story and screenplay.

However, there are plenty of instances when even an amazing, talented cast couldn’t save a movie from being a disappointment or even a disaster due to a bad script or other production issues. Users of the website Ranker have voted to determine the best casts in otherwise terrible movies.

Note: Ranker lists are fan-voted, live, and continue to accrue votes, so some rankings may have changed after this publishing.

10 This Is Where I Leave You

Originally based on a 2009 novel, This Is Where I Leave You is a dramedy about a dysfunctional family that has to reassemble, and spend a week together, after the death of the family patriarch. Led by Jason Bateman, Tina Fey, and Jennifer Aniston, and directed by Free Guy’s Shawn Levy, it had all the ingredients to be great.

Except, while it made a small profit at the box office (about $21 million, not counting marketing costs, according to Box Office Mojo), Rotten Tomatoes called it “a letdown” as it holds rotten scores from both critics and audiences. The ensemble cast is there, and in moments the family drama shines, but mostly it’s too basic in plot and saccharine in tone to satisfy either the drama or comedy it tries to balance.

Rated as one of Adam Sandler’s worst movies on Rotten Tomatoes, Grown Ups 2 isn’t a lost gem of cinema; in fact came during a wave of panned Sandler films that would seemingly define the actor for the 2010s as a has-been who’d lost his mojo. Only recently with Uncut Gems and Hustle has this changed back, with Sandler showing off impressive acting chops.

Still, looking at the cast itself, with many former Saturday Night Live members who have also had plenty of practice in the stand-up world, it’s not hard to imagine this or the first film being a hilarious outing about growing up, parenting, and how times have changed. Instead it ends up feeling like a Sandler vacation subsidized by Sony and reimbursed by audiences.

8 What To Expect When You’re Expecting

Named after, and somewhat adapted from, a pregnancy guide of the same name, What to Expect When You’re Expecting can boast Cameron Diaz, Jennifer Lopez, Elizabeth Banks, and Anna Kendrick as its leading women, experiencing the tribulations of pregnancy and parenthood.

Earning a meager 23% on Rotten Tomatoes and a 5.7/10 on IMDb, this ensemble rom-com’s attempts at being charming did not land. In the same year that Banks starred in The Hunger Games and Kendrick headlined the first Pitch Perfect, it’s obvious the movie had the talent, but the script didn’t provide the cast with much to compel audiences in the first place.

By 2010, Jack Black had made a name for himself in the world of comedy, and both School of Rock and Kung Fu Panda show the best he had to offer. But this adaptation of an 18th-century novel, while a surprise box office hit, was one of the bigger miscalculations in his career.

Related: How Tall Is Jack Black? Plus 9 Other Details You Didn’t Know About Him

However, its failure isn’t on Black at all, since the movie finds him in a role very similar to the ones that made his name in the first place. The biggest oddity is actually the source material chosen for the project, since the original book is meant to be a critical satire of 18th-century society, the opposite of a vehicle for diversionary humor that the movie sought to be.

Remember Get Shorty, the 1995 crime comedy movie that, along with Pulp Fiction, helped revamp John Travolta’s career in the 19990s? MGM and Fox were counting on that when, ten years later, they released the sequel Be Cool, which changed the setting from the film to the music industry.

Not only did it feature the return of Travolta and Danny DeVito’s characters, but it reunited Travolta and Uma Thurman from Pulp Fiction. Destined to succeed? Nope. What it instead becomes is an excuse to cash in on nostalgia and be a vehicle to once again revive Travolta’s career. While it isn’t nearly as bad as the other big 19990s sequel that year, Son of the Mask, it still fails to justify returning to Get Shorty’s world.

What it instead became was, as Roger Ebert himself said in his 1/2 star review, “a vanity production beyond all reason.” The movie definitely feels like it was made specifically as part of Bob Dylan’s brand, and considering Dylan is a co-writer of the movie, what other conclusions are there to be drawn? It ends up wasting everyone’s talent, including its Nobel Literature Prize-winning musical star.

See also  NOT HOLLYWOOD, NOT BOLLYWOOD, BUT TOLLYWOOD’S “RRR” IS MAKING INTERNATIONAL HEADLINES

How fitting it’s in fourth place! The 2015 attempt to revitalize Marvel’s first family in cinematic form, Fantastic Four is one of the worst movie remakes for Ranker, but at the same time, is recognized for how much potential it had considering the cast assembled for the movie.

Miles Teller had just come off acclaim for Whiplash, and Michael B. Jordan in the same year brought the Rocky franchise back with Creed, yet the movie managed to be the worst Fantastic Four outing to date. Considering the flak John Krasinski’s Mr. Fantastic has received for his Doctor Strange 2 appearance, perhaps there really is a curse when it comes to adapting the Fantastic Four to screen.

What do you get when you cast Robert De Niro, Diane Keaton, Robin Williams, and Susan Sarandon in a comedy film based around a wedding? You get, according to The Skinny‘s Josh Slater-Williams (as also quoted in the Ranker list), a film “completely devoid of laughs … [that’s] also fuelled by some repugnant misogyny, homophobia and stereotyping of particular races.”

Having these screen legends acting in such a terrible film doesn’t save the movie at all. If anything, it’s the cinematic equivalent of autotuning a truly untalented singer: it’s at a point where what’s meant to elevate the material actually only emphasizes the problems even more. It’s disappointing that this was one of Robin Williams’s final films.

Although it wasn’t a box office flop like Mother’s Day, New Year’s Eve was likewise directed by Garry Marshall and released at the end of 2011, as a follow-up to his previous effort Valentine’s Day. It also likewise was an ensemble piece panned by critics, as this trite rom-com-dram was one of the worst films that year.

The cast is too long to name, but Robert De Niro, Katherine Heigl (both also in The Big Wedding), Michelle Pfeiffer, and Hilary Swank all definitely deserved a better-class script. Nearly every single member of the main cast has starred in better movies or TV shows than this. The best thing about New Year’s Eve is it made people appreciate the clean cinematic slate that 2012 would bring.

See also  Sonic the Hedgehog 2: Release Date and Everything You Need to Know

Even though it’s widely considered the worst Batman film ever made, Batman & Robin is still fun to watch if only to laugh at it. Providing some of the funniest Batman movie quotes ever, Batman & Robin is definitely a movie worth watching, not because it’s a well-made movie, but for the exact opposite reason.

Still, while even George Clooney admits the film was bad, he went on to win Best Supporting Actor in 2006. Alicia Silverstone had just starred in Clueless, Uma Thurman in Pulp Fiction, and Arnold Schwarzenegger had dominated movies of the 1980s and early 90s. This could have worked with a better script. Still, a Batman ’97 comic could be an interesting read and success if DC ever made it.

NEXT: 10 Famous Roles That Were Recast Last Minute


Next
10 Best One-On-One Fights In The MCU, According To Ranker


An entertainment list writer for Screen Rant, Ryan Ten has been passionate about creative writing since 2008, and has had a love for movies, TV shows, comics, and video games since before he can remember. He especially loves media that have a compelling story to tell.

Following his dream of working in media, he obtained a media studies degree from the University of Virginia, studying the role that media of all kinds play in everyday life and in the course of human history past, present, and future. Before coming to Screen Rant, he self-published six books, including designing the interior and covers himself. While he still enjoys writing in his free time, his main focus now is delivering content to SR visitors through lists about topics both mainstream and obscure, with the hope of giving a new appreciation of classics or new knowledge about unknown but great works of media. He’s dedicated to delivering nothing less than the best.

Richest NFL players past and present

Aly & AJ refuse to live in regret on wonderous With...